The Best Halal Restaurants in Berlin - Look No Further! 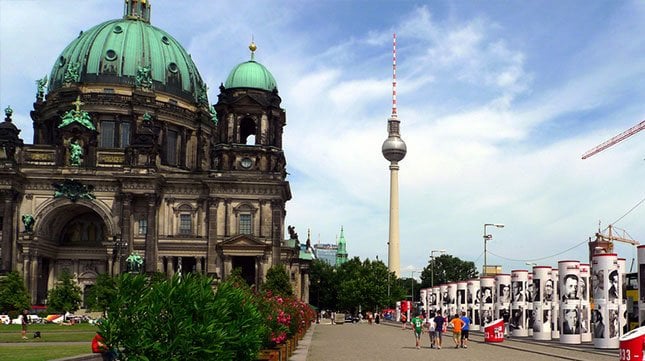 Berlin, the vibrant capital of Germany, is one of the most visited cities in Europe and has earned itself the status of being a world city and mass tour destination. The city offers a glamorous mix of modern life intermingled with a delightfully refreshing spirit that will undoubtedly fascinate first-time visitors. Needless to say, the cuisine in Berlin is a highlight of the city. Dining in Berlin can prove to be a fantastic experience. The city's dining scene has rapidly evolved over the years and it is home to a wealth of fine dining restaurants, cafes and dining outlets serving a rich variety of both German and International cuisine. German cuisine itself has some of the richest and most enticing flavours across the globe, giving diners plenty of mouth-watering options to choose from. For Muslim travellers, Berlin offers over 60 Halal restaurants and eateries scattered around the city.

Due to the sizable Muslim community living in the city, several Muslim-owned Halal restaurants – including some which have been certified by Halal bodies – are located in Berlin and serve a wide variety of cuisine ranging from German fare to Indian and Middle Eastern dishes. A popular Halal restaurant in Berlin is the ZamZam Restaurant, located close to U Kleistpark. Diners are offered a wide range of exquisite Indian and Pakistani cuisine. Take-away and delivery options are also available and the Muslim owners of the ZamZam Restaurant have confirmed the Halal status of the food being served. The functioning hours of the restaurant are usually from 12 noon to midnight. Located at Friedrichstrabe 237, is the Rayan Chicken fast-food outlet which is an ideal stop for American fast-food. Popular items on the menu include chicken wings, burgers, chips and chicken nuggets - all of which are Halal. The staff at Rayan Chicken can speak English and the restaurant is typically open throughout the week, from 11 in the morning to 11 in the night.

Baraka restaurant is located down 6 Lausitzer Platz and serves a tantalising range of Moroccan and Egyptian cuisine. The interior of the restaurant has been decorated with traditional Islamic design elements, creating a unique dining atmosphere. Though most of the menus are in German, the waiters at the restaurant will be happy to recommend some of their best speciality dishes. Sharazad is yet another popular dining spot amongst Muslims in Berlin. Serving an enticing range of Arabic cuisine, Sharazad also offers a shisha lounge and prayer room facilities for Muslim guests. Its premises have a child-friendly atmosphere and free Wi-Fi internet access is also offered to diners.

In addition to the restaurants mentioned above, other popular Halal restaurants in Berlin include the Al-Dei'a Snack at 46 Sonnenallee and Imren Grill at Boppstrabe 10, serving an assortment of Turkish and Lebanese cuisine, respectively. Several other Halal restaurants and eateries are also scattered across town, giving Muslim travellers to Berlin quite a few dining options to choose from.