11 of Spain's Local Cuisines You Must Try On Your Next Visit! 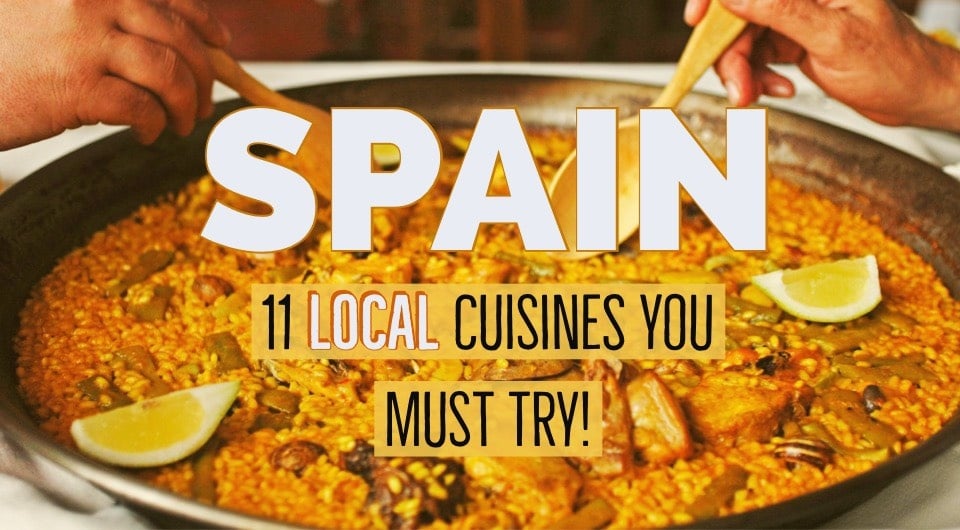 ​Being the gateway between Europe and Africa as well as the Mediterranean and the Atlantic Ocean, Spain has been fought over by great powers such as the Romans and Greeks, as well as Muslims from Africa and Arabia.

Spanish cuisine is heavily influenced by its multicultural past with the Greeks and the Romans introducing olives and olive oil thus establishing viticulture in Spain; the Visigoths or Celts introduced the Spaniards to brewing, whilst the Moors and Berbers who crossed the Strait of Gibraltar during the Muslim conquest brought with them rice, sorghum, saffron, eggplant, oranges, peaches, almonds, and lemons, creating the Andalusian cuisine.

Spain was one of the superpowers of exploration and with the colonization of America, the likes of tomatoes, potatoes, and paprika were introduced to Spanish cuisine.

Spain was where chocolate as we know it was created; sugar was first added to chocolate in order to reduce its natural bitterness in Spain! 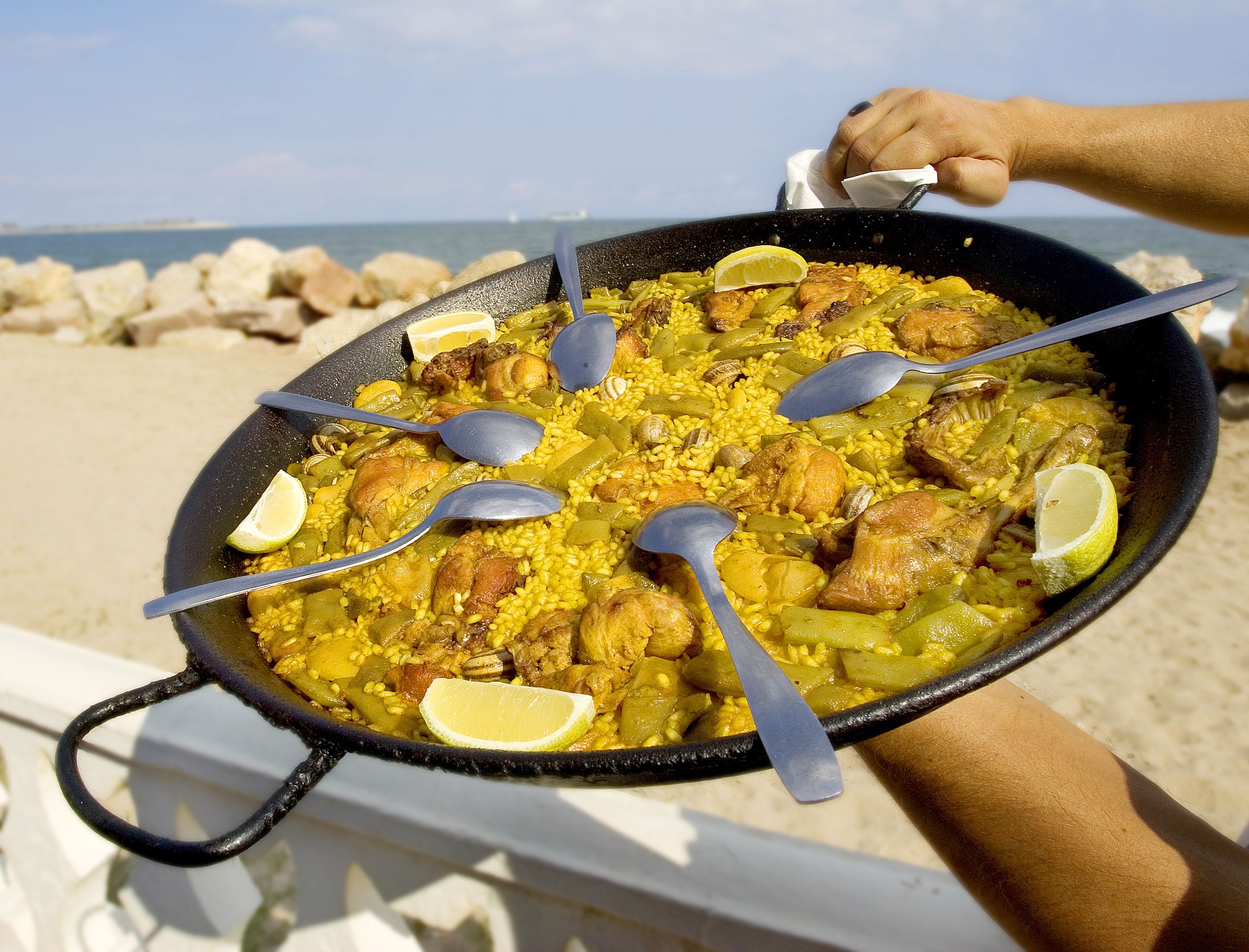 Paella is probably Spain’s most well-known food! It’s a versatile and wholesome dish that is sure to keep you going back for seconds!

During the 10th century, Moors in Muslim Spain introduced rice cultivation which made quite an impact on Spanish cuisine. Valencian cuisine incorporated rice into their daily cooking, preparing rice casseroles with rabbit and spices for family events and religious feasts.

Thus, by the 15th-century rice is established as an essential ingredient of Valencian cooking!

Paella can be prepared with a myriad of ingredients but the main element has to be rice, they usually use the Bomba and Calasparra varieties which are grown along the East coast of Spain, they are especially used for their ability to absorb all flavors of the other dishes.

Paella is traditionally prepared with rabbit or chicken, saffron, runner beans, and butter beans, however, there is a seafood variant as well. This can be prepared with shellfish such as mussels and shrimp, as well as cuttlefish.

The most popular variant of the paella is the mixed paella which incorporates both land meat as well as seafood.

Arroceria Marina Ventura claims they serve the best paellas and rice dishes, so give them a visit when in Madrid!

This is a classic Spanish dish and is famous world over!

Its ancient Andalusian origins point to the Romans first bringing it with them to Spain. At the time it was only a soup consisting of bread, olive oil, garlic, and vinegar.

Only during the 19th century did it get the signature red color when tomatoes were introduced to the recipe transforming it into the much loved cool summer treat it is today!

The more modern Gazpacho is made with bell peppers, onions, and cucumbers; they also substitute the tomatoes and bread with avocado, watermelon, grapes, meat stock or even seafood!

If you are out and about on a hot Spanish summer day, go for the gazpacho as it’s served chilled! Since it mainly consists of vegetable and bread, it is Halal friendly so you do not need to worry about not being able to try it.

You can find this dish at El Torreón Restaurante. The first reference of the tortilla was discovered in an anonymous Navarra document addressed to the court in 1817, which explains the hardships faced by the locals.

It says that the women had learned to prepare a tortilla by mixing fewer eggs, potatoes, and other ingredients.

However, the legend behind the tortilla is that a Carlist general created a new dish called ‘tortilla de patatas’ as an easy and nutritious dish to cover the scarcities of the Carlist army.

Another legend states that the general got the idea from a farm wife.

It is a simple dish consisting of eggs, potatoes and sometimes onions; however, the addition of onions is regarded as a controversy by extreme food enthusiasts. The dish is served either cold or warm.

You can find the best tortilla de patatas at Casa Dani for great value and authentic Spanish taste! They are a little cafeteria hidden away inside the Mercado de la Paz. 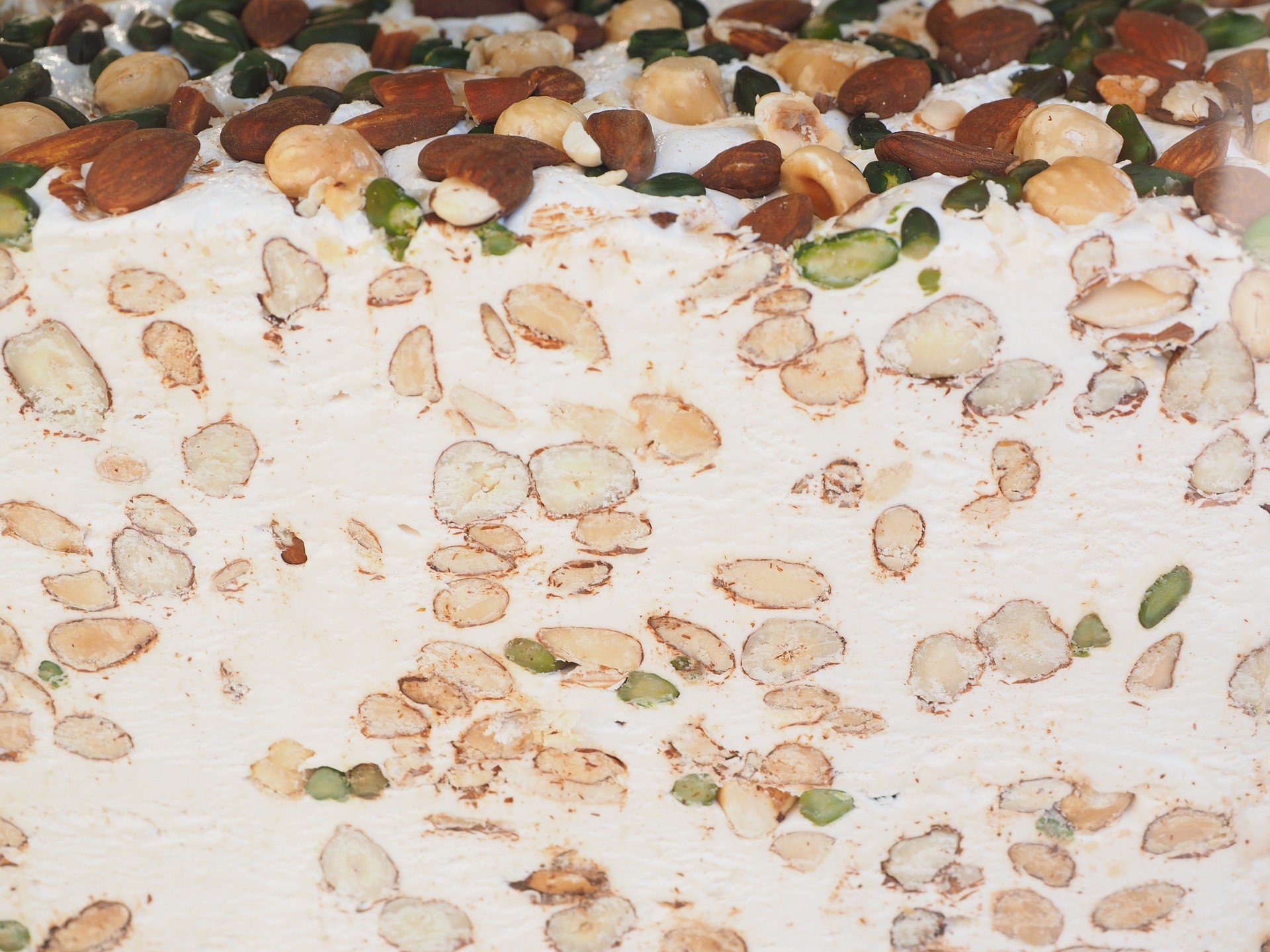 Turrón has existed since the 15th century and is consumed all over Spain as of now.

This confectionery has Islamic roots; the modern day treat may have been derived from a Muslim recipe prepared in Islamic regions of the country and was known as turun.

A similar sweet was sold during the era of Ancient Rome known as cupeto or cupedia.

Turrón is prepared with almonds, milk, egg whites, sugar and honey; it is a type of nougat and is especially consumed during Christmas.

You will be able to find turrón almost anywhere in Spain however; a visit to TORRONS VICENS PETRITXOL is a must. 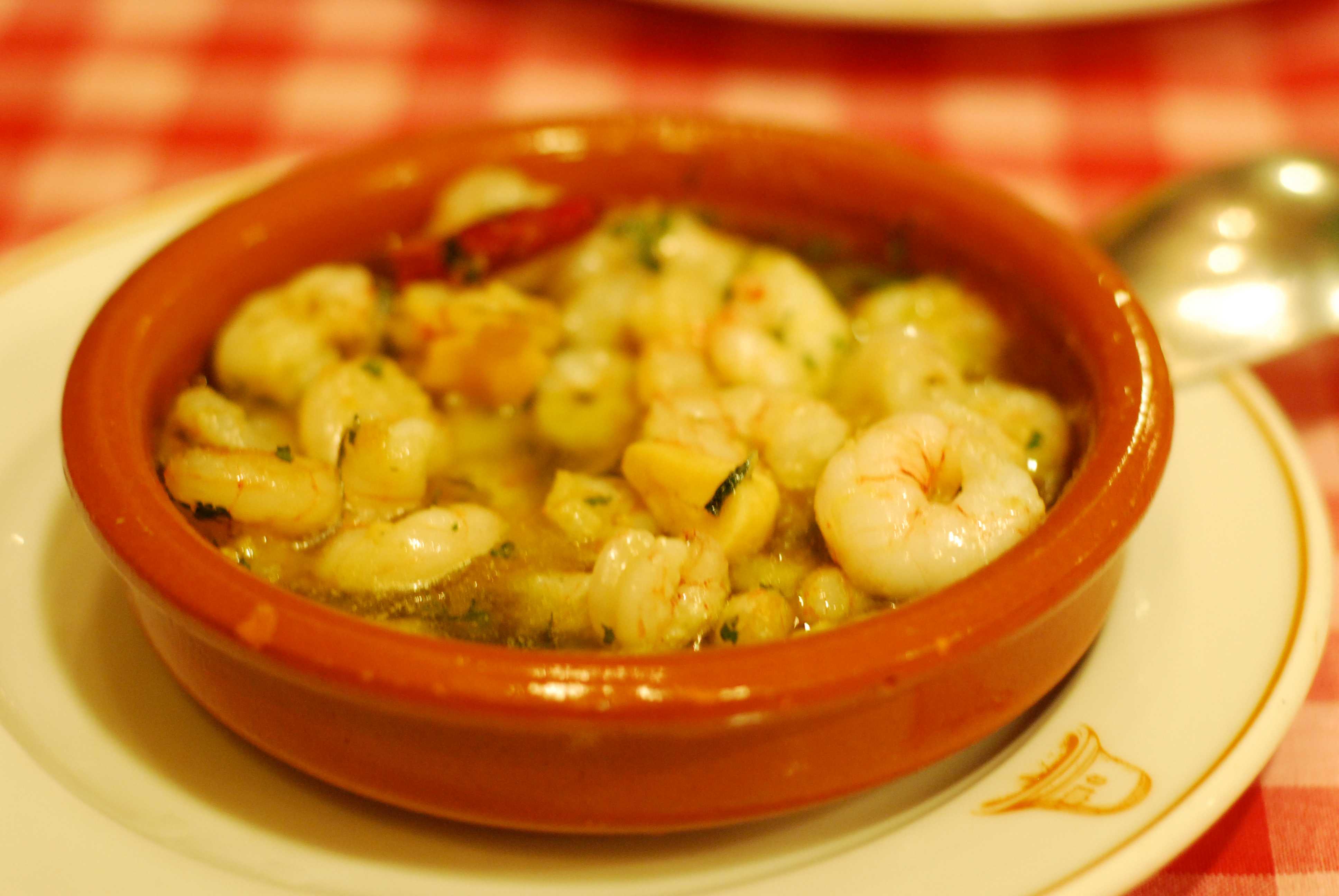 This simply translates to prawns in garlic sauce, now doesn’t that just sound delicious?! The exact origin of this particular dish is not known, however, it is a Tapas essential.

Tapas makes up an important part of Spanish cuisine, it is said that it originated in the 13th century when Castillian King Alfonso X suffered from an ailment which required him to consume small amounts of food accompanied by wine, upon his recovery he made it a law to serve wine with a food accompaniment.

Taverns all across Spain started serving wine receptacles topped with a slice of bread with cheese or jam. Tapa is the Spanish word for a lid, and thus Tapas was born!

Tapas are usually served at bars, however, it is a definite must try – be aware that they serve alcohol in these restaurants and bars. This is yet another simple dish prepared with simple ingredients yet oozes with flavor!

La Casa Del Abuelo is a highly recommended place to try gambas al ailljo, they even made it to the Lonely Planet website.

It is an old traditional establishment that has been around for more than a hundred years so you will be assured of the best quality food prepared with care. 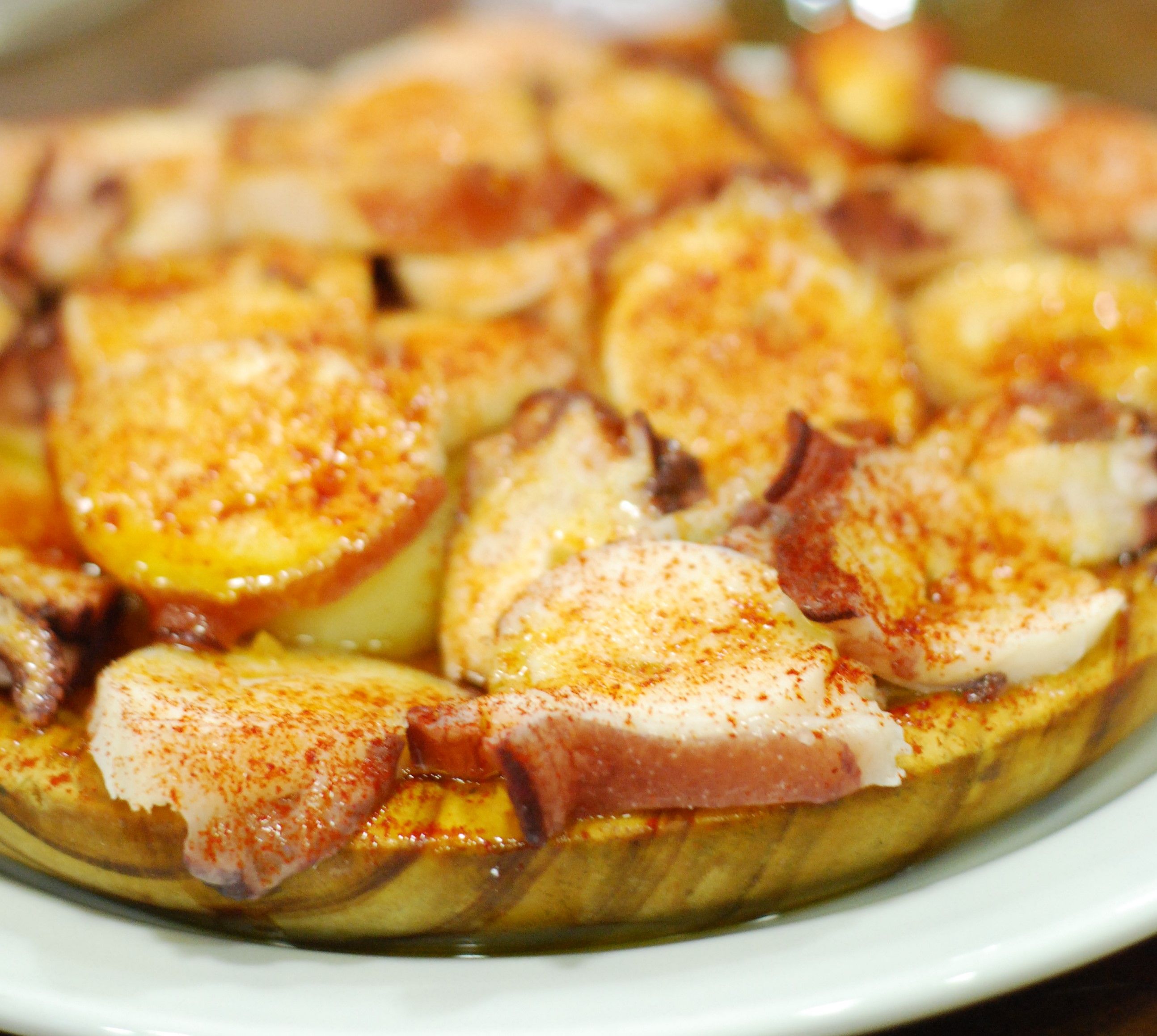 This is a traditional Galician octopus dish also referred to as polbo á feira or pulpo estilo feira.

This dish has been prepared the same way for centuries. Pulpo al la gallega was first brought about 125 years when muleteers first transported octopus to inland cattle fairs where they prepared it with olive oil and paprika.

The octopus is prepared in a copper cauldron and this adds to the taste of the dish.

Octopus makes up a great part of Spain’s seafood, and the Spaniards know how to prepare a good octopus dish so be sure to give it a try when in Spain! 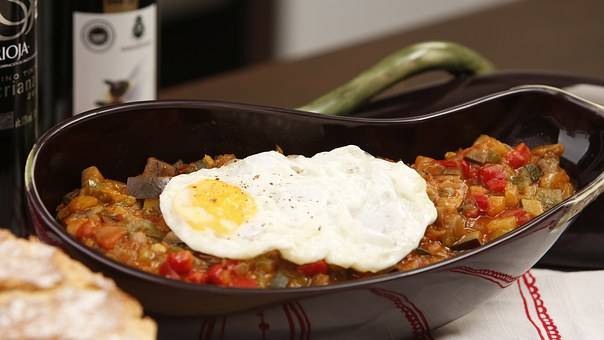 Also known as pisto manchego, it is a dish native to Murcia and Castilla La Mancha. It is prepared with tomatoes, onions, eggplant or courgettes, green and red bell peppers, and olive oil.

It is also known as the Spanish equivalent of ratatouille and served as a starter or an accompaniment to another dish.

The pisto is often served with a fried egg and a slice of bread; this could also be a great vegan dish. Pisto can also be used as a filling for empanadas and tortillas. The Spanish version of the much-loved crème brûlée, it is a part of Catalan cuisine. Many people want to lay claim to the creation of this sweet dessert and the Catalonian’s say they originally created it. Catalonia presides in the northeast corner of Spain, close to the French border.

The recipe for crema Catalana can be found in cookbooks written in the 14th and 16th centuries, it is described as a custard cream with a burnt top; the sugar top was burnt using a hot metal rod in order to give it its signature burnt crust.

Crema Catalana is also referred to as Crema de San José (cream of Saint Joseph) which is also regarded as Spain’s father’s day, and would only be served on that day, however, in modern times you can find this dessert pretty much everywhere on any day!

To try a twist on the crema Catalana go to patisserie escriba! 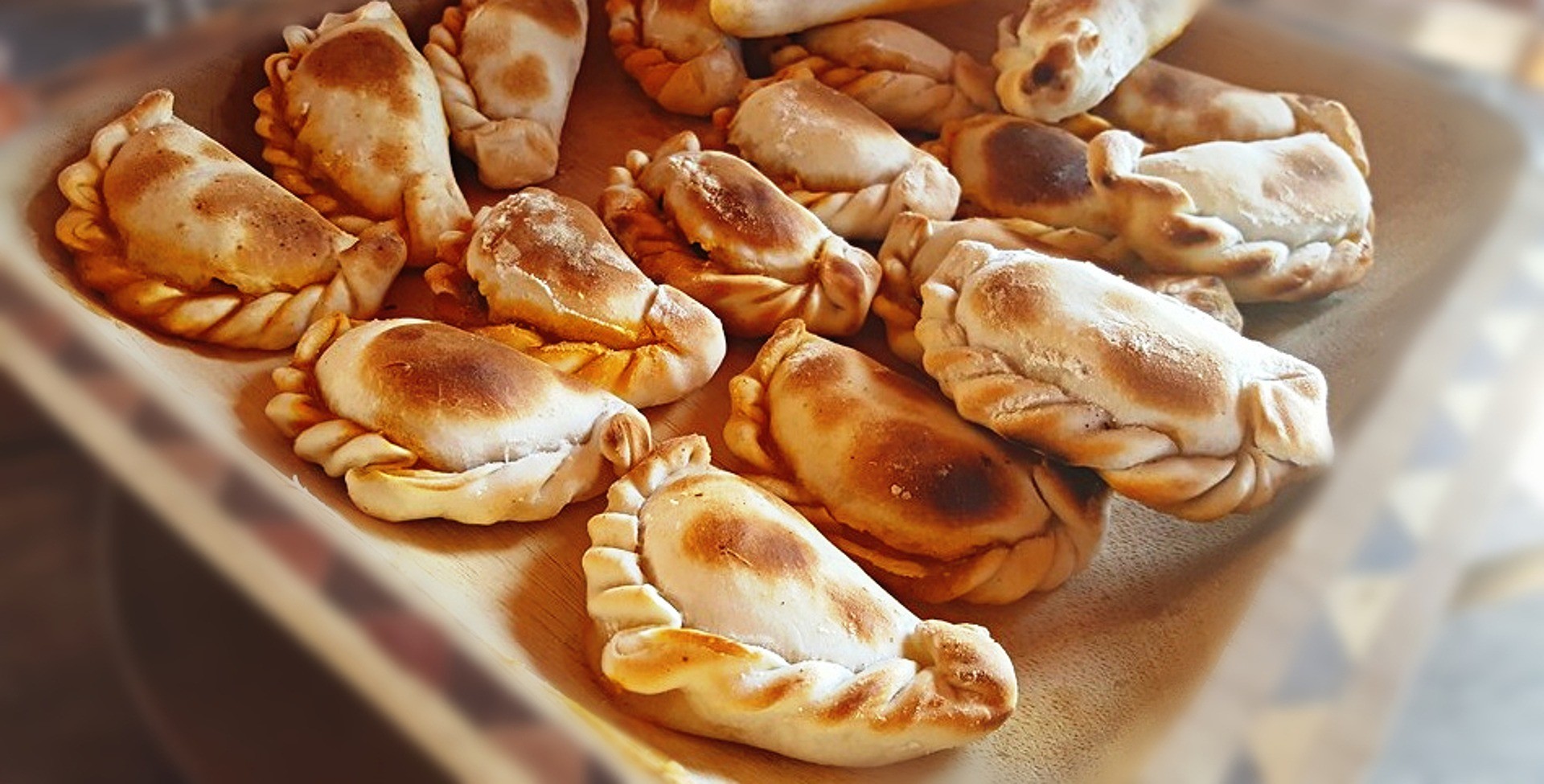 A classic of Galician cuisine, you will not go wrong with empanadas!

Empanadas date back to 1520 and unlike the famous Latin empanadas which are prepared as individual hand pies, the Galician empanada is prepared as a single large pie which could be rectangular or circular and then sliced into individual pieces.

Empanadas are famous amongst farmers, who would take it to the fields with them to snack on while working.

The empanada is a yeasty, doughy pie crust filled with sautéed onions, bell peppers, garlic and some sort of protein. The protein could be tuna or bonito, chicken, or octopus.

What better place to try empanadas than in a place where they specialize in them? Try the empanadas at El Club de L’ Empanada. 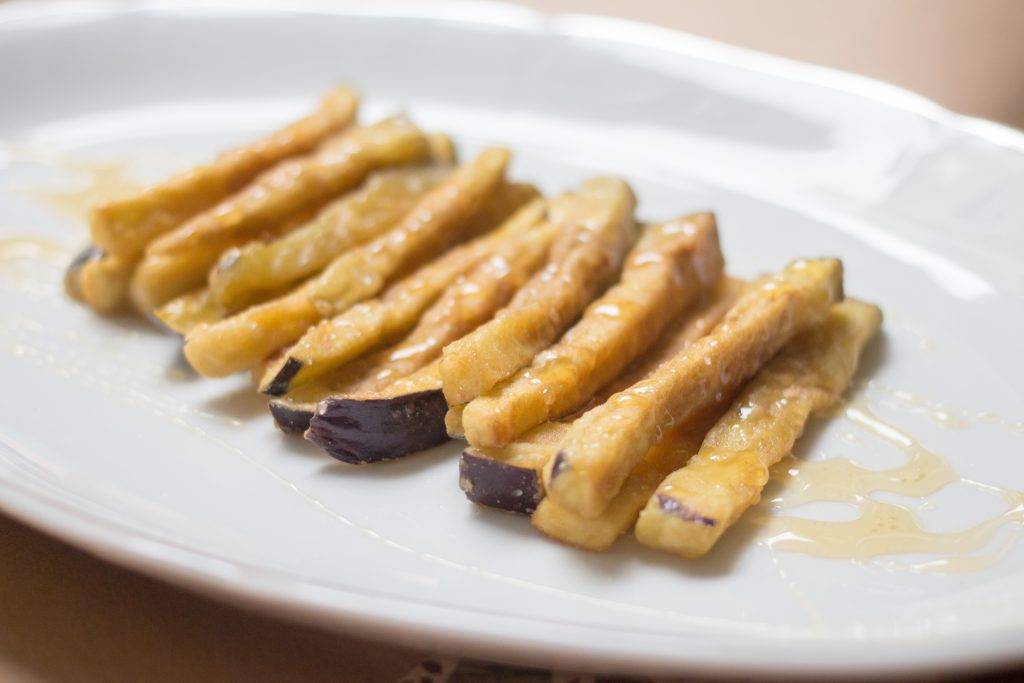 A simple yet delicious dish, do not miss out on this one!

Another example of how Moors influenced Spanish cooking, berenjenas con miel was introduced during the 700 years of occupation in the Iberian Peninsula.

This dish combines both sweet and salty tastes and adds to that the eggplant’s silky texture, it is a sure treat! 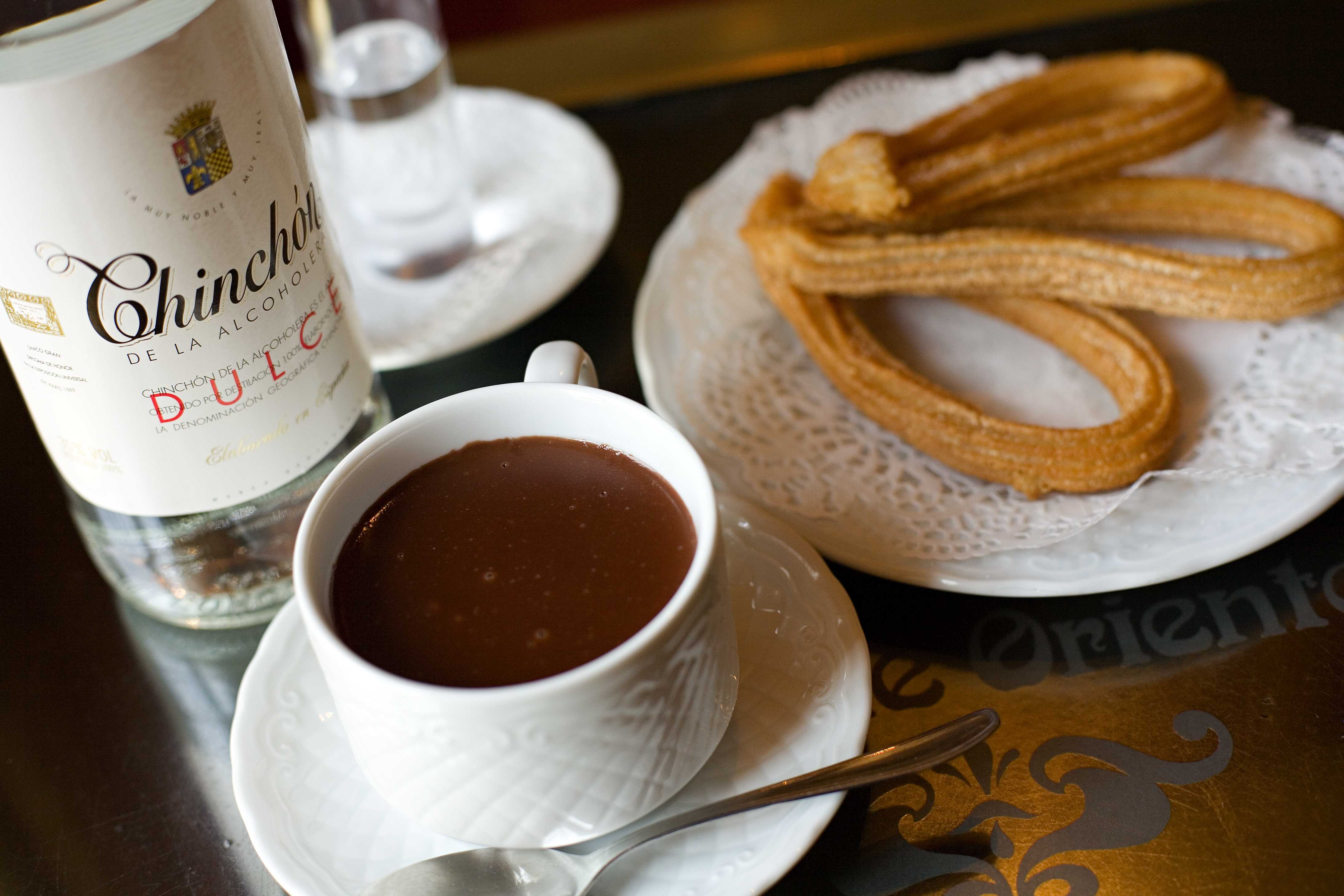 Ending with a sweet note, where better to try the internationally loved treat than in its country of origin?!

This sweet treat has an exotic history, some speculate that it was first introduced by the Portuguese who traveled to the Orient and brought churros with them, and the recipe jumped the border into Spain where it was modified into having the dough extruded through a star-shaped die rather than pulled which was the original Chinese technique.

Another theory suggests that it was first created by Spanish shepherds who lived in the mountains as a substitute for baked goods as it was a light dough and easier to prepare.

Nowadays, churros can be found all over Spain; in restaurants served for breakfast, by street vendors as a snack to be enjoyed at any given time of the day and, even at specialized churrerías.

It can be served in many different ways; it can be served with cinnamon sugar, chocolate, dulce de leche and even café con leche – a Spanish coffee. Taste the best churros at one of Spain’s oldest Chocolatiers, Chocolatería San Ginés.

Finding Halal food in Spain won’t be a hard task as most of their dishes are Halal friendly as it comprises of a lot of seafood and vegetables, as well as the major Muslim influences in their cuisine.

Another reason why finding Halal food in Spain is going to be easy peasy is because of the Halal Trip: Food, Restaurant, Travel & Prayer time App or you can always trust a good ol’ Google search.

So get packing and head over to beautiful Spain to enjoy their scrumptious​ food!

Transport Guide: Ways to get around Spain by Air, Rail and Road