6 Ways to Enjoy the Beauty of Daegu, the "Large Hill" City of South Korea

This third largest city in Korea is located in South-Eastern Korea, about 80 km from the coastline. The name of the city literally translates to “large hill” due to its position at the central plain of the Yeongnam region.

In ancient times, Daegu was a prominent city, thus having lots of cultural and historical sites all over the region. Daegu has a humid subtropical climate which is ideal for producing its famous high-quality apples. This city is maybe not as well-known as Busan or Icheon, but there are gems yet to be discovered but worthy to be included in your itinerary when visiting Korea.

How to get there

Daegu can be reached either by airplane, train or bus. Since taking a bus requires quite a long time, we recommend you to go by airplane or train from Busan or Seoul to Daegu. Korean Airlines (KAL) and Asiana Airlines fly there a few times daily from Seoul’s Gimpo Airport and Incheon Airport.

Note: the flight and train schedule might change due to the pandemic.

What to do in Daegu, Korea

Daegu attractions consist mainly of its historical and cultural treasures left by the past civilization and its breath-taking natural landscapes. They even have lots of nice parks (you might want to check Duryu Park, Dalseong Park, Gyeongsan-Gamyeong Park within the city).

However, the city has also evolved to be a modern, metropolitan city with contemporary arts, fashion and high-tech industries. 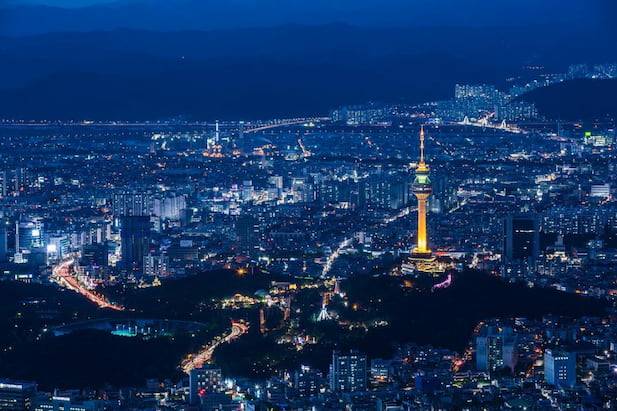 Woobang Tower is also called 83 Tower because this 202-metre tower is equal in height to an 83-storey skyscraper. The tower was completed in 1992 and has become the Daegu landmark with an observatory, a sky lounge and a revolving restaurant with amazing night views of the city, as well as a theme park called E-World built around it. There is an ice rink, waterfall, fountains, lighting displays, and flowers, as well as rides, exhibition and performance halls, and restaurants within the complex. On top of that, you can try Sky Jump, a bungee-jumping platform at an elevation of 123 metres, or getting on Tower Skyway (cable car) that travels across the entire park, allowing you to get a bird's eye view of all the park's rides and shows.

Guam Farm Stay Village is Daegu’s fruit farm located near the city. There, you can find a variety of fruits – including apples, grapes, peaches, and chestnuts that you can try on the spot.

Also, starting from the time when cherry blossoms are about to be in full bloom (during the spring season), you can experience farming activities such as planting various vegetable seeds, thinning out apple trees, rice reaping or plucking of beans.

For those of you who plan to go there as family vacation, this place would be the perfect spot for your kids. They also facilitate a farm-stay program, where you can grow and taste vegetables such as lettuce and chili.

3. Have a shopping spree while exploring nearby attractions

Locals have said it: when you go to Daegu, you must visit Seomun Market, the oldest traditional market in Daegu founded during the Joseon Dynasty. The market has more than 3,500 stalls selling all kinds of items from high-quality textiles, handicrafts, silver products, and dried seafood. It is especially crowded in the evening as the market turns into a food market serving street foods. The must-try delicacies, among others, are makchang (beef intestines) and tteokbokki (spicy rice cakes). Just don’t forget to ask to make sure if the food they serve is halal. 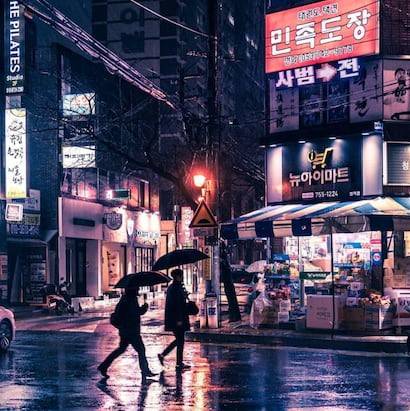 You can also go to other attractions nearby such as Geundae Alley where the iconic Gyesan Cathedral is located, and Kim Kwang-Seok Street which was named after a folk singer-songwriter (1964-1996) who lived in a house on this alley. Along the alley you will see beautifully rendered portraits and murals, many with a trompe-l’œil effect and inspired by his music.

For those of you who are into oriental medicine/herbal, you must visit Daegu Oriental Medicine Market (Daegu Yangnyeongsi). Founded in the Joseon dynasty, this market is one of the 3 Korean traditional medicine ingredient markets in Korea. Here you can buy Korean tea and herbal medicine including goji, gingko, and ginseng for a cheap price. You will also find clinics with doctors specializing in oriental medicine dating back to the Joseon Dynasty.

4. Relax at a Jjimjilbang

If you like to visit places locals go to, you must visit a Jjimjilbang.

Just like Japanese onsen, the soaking pools are segregated and you will be required to remove all items of clothing. If you are not comfortable being undressed among strangers, you can visit their exercise areas, clothed saunas, arcade games and also sleeping areas with ondol (under-floor heating) with special clothes they provide in the communal areas once you pay the entrance fee.

Nature lovers will find Daegu delightful as there are many beautiful places where you can hike or simply enjoy beautiful scenery (especially during Spring and Autumn), namely Palgong Mountain, Biseulsan Recreational Forest and Apsan Park.

At the Southern foot of the Palgong mountain, you will find temples like:

Donghwasa, that has beautiful columns and carvings beneath its eaves with a history that can be traced back to the end of the 5th century;

and Gwan-Amsa where Gatbawi, a 4-metres tall Buddha statue carved in-situ with a slab on his head.

At Apsan Park you can either hike or get into a cable car that runs to the top for convenient access to Apsan Observatory for a panoramic view of Daegu (the view is stunning at night!).

But if you prefer a less sweaty trip, you might want to consider visiting Daegu Arboretum and Suseong Lake. The arboretum (botanical garden) will give you stunning views of a huge range of trees and plants, as well as several large greenhouses that contain more exotic specimens; whereas Suseong Lake is a place for slow walks and relaxation where you can do paddle boat ride or enjoy water musical fountain shows while chilling at restaurants and cafés around the lake. 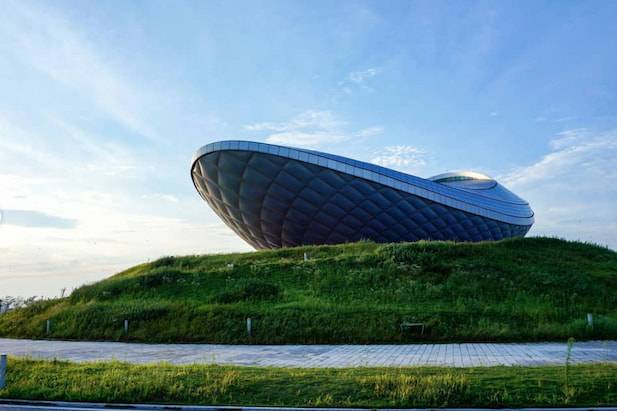 The other iconic building you must visit and snap beautiful photos at is The Arc Cultural Center. The magnificent modern architecture of this building makes it look like a giant upturned shell. The building was designed by New York’s Asymptote studio as part of the World Expo 2012. You can also visit museums such as Daegu National Museum where you can learn about the culture and history of Daegu, and Daegu Art Museum where you can view exhibitions of modern and contemporary art.

The city of Daegu might sound familiar to BTS fans because it's the birthplace of two beloved members of the group, V (Kim Tae-hyung) and Suga (Min Yoon-gi).  Suga's alternate stage name and alter-ego is even dedicated to his hometown – Agust D, which spells DT Suga backwards, DT being short for Daegu Town. Just another reason to check out and love this beautiful city!

As you can see, there are many places you can select from to craft your Daegu itinerary. Staying one or two nights (depending on your interests) might be good enough to explore Daegu and enjoy the beauty of the Korean city of “large hill”.