Muslims who travel to Uzbekistan are in for pleasant surprises at this unique destination. Uzbekistan is also well-known for old, beautiful mosques that are rich with history and culture – you will marvel at the amazing Islamic architecture. Not only are some of these mosques important historic sites, but these structures also reflect the cultural influences of the centuries gone by. Additionally, there is hardly any hassle if you need to find nearby prayer places in Uzbekistan due to the high Muslim population in this travel destination. 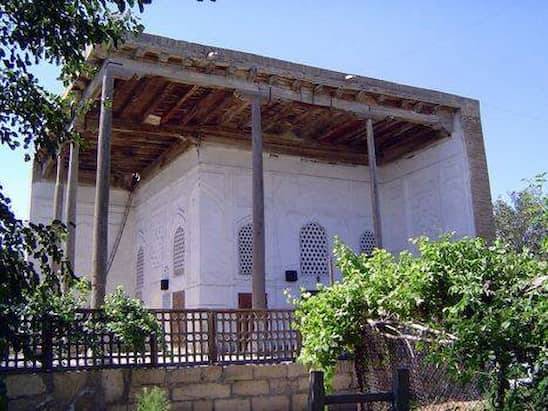 The 16th century Baland Mosque is among the historic mosques that are located in the ancient city of Bukhara – which is also a UNESCO Heritage site. The mosque has two beautifully adorned prayer areas for summer and winter. The Baland mosque’s iwan (entrance) is actually the summer prayer area that is decorated with intricate wooden muqarnas, and the winter prayer room is just as fascinating with impressive mosaics and Islamic architecture.

Also known as the Madrasah of Khalif Niyaz-kul, Chor Minor is another historic mosque that is located in Bukhara. This mosque stands out for its unique architecture, with its four blue, ceramic domed towers and was built in 1807 by a Turkmen merchant known as Caliph Niyazkul-Beg. The four towers are decorated with different motifs that reflect four world religions and are designed differently from each other. In fact Chor Minor means ‘four minarets’ in Persian. Chor Minor’s unique shape also features an intriguing hexagonal lobby as well. 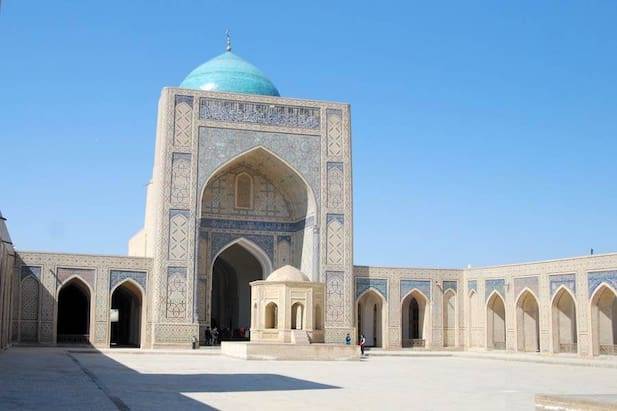 Po-i-kaylan is a religious complex consisting of the Kalyan mosque and the Mir-i-Arab Madrasah. This religious ensemble is located at the foot of the Kalyan Minaret which is one of the popular attractions in Uzbekistan, and the name of the religious complex itself means ‘foot of the great’. The ancient Kalyan Minaret consists of a round tower constructed from baked bricks with a spiral staircase, and it was built in 1127 making it the oldest structure in the complex. The Kalyan Mosque was built 1514, and you should not miss out on admiring the impressive traditional architecture which consists of an open, beautiful mosaic entrance and the structure topped with a large blue dome. The Mir-i-Arab Madrasah that is decorated with colorful mosaic tiles was constructed from 1535 to 1536 and is still being used today.

This mosque was built in 1637 and is another historic mosque in the ancient Bukhara city. The Mago-i-Kurpa Mosque is a two-storey building that consists of twelve domes. The second storey is located almost underground and can be reached by a staircase. The mosque gets its name from the word ‘Magok-i’ that means ‘in the subsoil’, but the mosque is larger than it appears and the main dome can seen quite prominently. 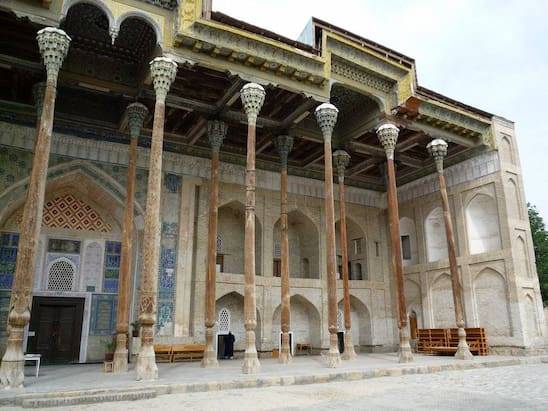 Image Credit: eurasia.travel
This mosque is the only that stands in Registan Square that is located opposite the Ark Of Bukhara. Bolo Haouz was built in 1712 and was the official prayer place for royalty, Also known as Baula Hauz, the name of the mosque means ‘The Mosque of the Bala Lake’ – the lake actually referring to the octagonal pool in the courtyard. A minaret was newly added in 1917 too. The wooden columns at the entrance will first grab your attention with its intricate carvings and muqarnas – the decorative iwan is also the summer prayer area. The painted ceiling is especially impressive with its colours and carvings that are influenced by Persian architecture, making this one of the interesting attractions in Uzbekistan.

A Muslim travel journey to Uzbekistan is a great way to learn more about Islamic historical sites from a different era – like the Bibi-Khanym mosque. It was originally built in 1404 and was among the largest and most impressive mosques during the 15th century – and an important monument in Samarkand. The mosque was built by the ruler, Timur in honour of his wife Bibi-Khanym and pushed the boundaries of architecture all those centuries ago. With the mosque’s decorative bright, blue domes with tall minarets, marble carvings and the large scale of the building, it’s a magnificent attraction to visit. Don’t miss the ancient marble Quran stand that dates back to the original time that the mosque was built. 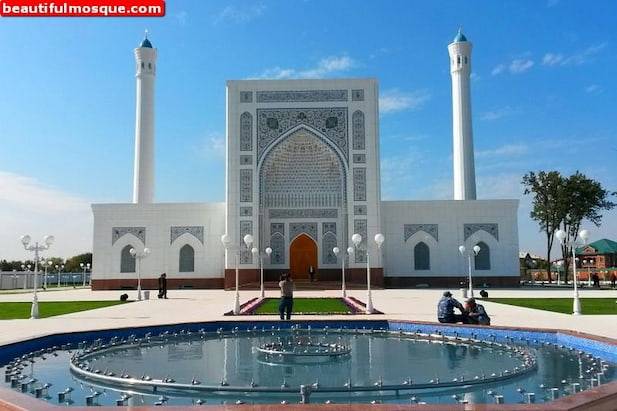 The Minor mosque is one of the newer additions on the list that you must visit when you are in Tashkent. The mosque was opened in 2014 and is constructed out of white marble in traditional Uzbek style. This mosque also has a unique circular prayer hall complete with an intricately decorated mihrab too. The exterior of the mosque features two white marble minarets and the main building is topped with bright blue dome – a beautiful sight especially during daytime.

How to find nearby mosques in Uzbekistan? Muslim travel to Uzbekistan is much easier with the HalalTrip app that will help you easily locate mosques and prayer places in Uzbekistan. Start planning you trip today!