Revisiting the Legacies in the “Ancient City” of Bukhara, Uzbekistan

Rich in history with its existence dating way back to the 6th century BC, Bukhara is a city that is a must-visit destination during your trip to Uzbekistan. Previously inhabited and populated by Buddhist monasteries and the Zoroastrians, the arrival of Islam in this city would then become prominent in changing Bukhara in the upcoming eras where it would then expand and reaches great heights. Islam and its growth would then give birth to one of the greatest Imams and muhaddith, Imam Bukhari. Used to serve as the center of trade during ancient times, modern Bukhara still retains its title as a shopping destination and is famous for its bazaar in Uzbekistan. With a such rich history in the growth and as a witness to the greatness of Islam, here are attractions that you must visit during your trip to Bukhara: 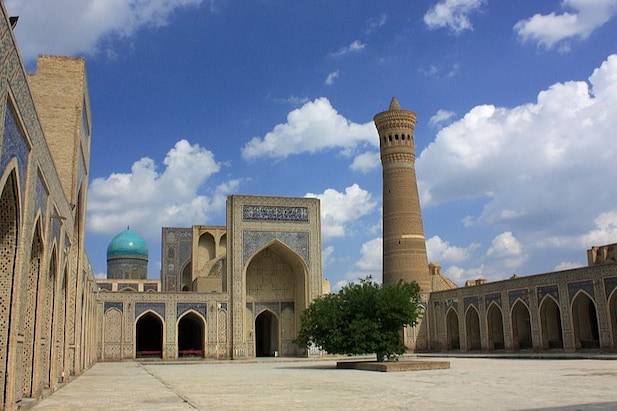 As home to one of the largest mosques and iconic Islamic complex especially in Central Asia, Poyi Kalyan is a must-visit attraction in the city during your trip. The complex itself consisted of three main parts, including Kalyan Mosque, Mir Arab Madrasah, and Kalyan Tower. The whole complex history dates back to when a cathedral mosque was built in 713, where it would then go through a series of demolitions, wars, fires, and restorations throughout the years.

In the past, the structure within the complex was so beautiful that even Genghis Khan thought that it was his designated palace during his invasions. Most of the complex would then be rebuilt during the 16th century after a series of demolition of the original buildings on a grand scale with the intention to match and rival the Bibi Khanum Mosque in Samarkand. The rebuilt complex would then finish off its construction in 1535 and be the Poyi Kaylan Complex that we know today.

The rebuilt Kalyan Mosque was completed in 1515, with a Timurid period style of architecture. You can expect ornament tiles, mosaics, glazed brick, and a large blue dome right on top of the mihrab. With an open courtyard as the center of the structure, this mosque stands with an area of 130 x 81 meters.

Mir Arab Madrasah would be the latest addition to the complex, the madrasa still serving its original function up until today. Built and finished in 1535, the madrasah features its own mosque, lecture halls, and mausoleums as a witness to the past burial tradition. The Mir Arab Madrasah is ornated with glazed mosaic tiles and topped off with a blue dome that showcases complex and intricate tilework.

As the only surviving structure of the original complex, Kalan Minaret has been standing tall as the landmark of the city since 1127. Constructed out of baked bricks, the minaret stands with a total height of 46 meters. The minaret features bricks with their own unique carvings, a set of stalactites, turquoise-colored tiles, and sixteen arches in its lantern. 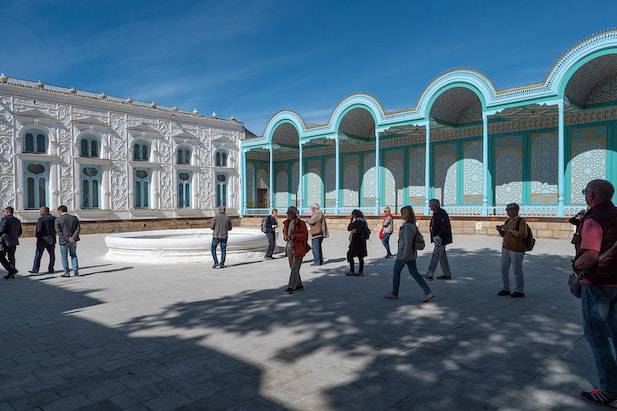 Sitorai Mohi Khosa, known as the 'Palace of Moon-like Stars' is a palace where beauty lasts throughout the century and is preserved until today. The palace's history dates back to the mid-19th century when Emir Bukhara Nasrullah Khan constructed its summer palace to escape from the heat. The original palace did unfortunately not survive and was replaced by a new palace by the last Emir of Bukhara, Sayyid Mir Muhammad Alim Khan, as a form of devotion to his wife Sitora. Its beauty during the time was deemed unprecedented due to the architectural style of the Bukharan architects that are trained in Russia, hence it shows a combination of the east and the west in its design. Not long after, parts of the second palace is destroyed and would later be rebuilt again once more. The palace would then be one of the heritage that the Emirate of Bukhara left before its fall in 1920.

The palace that we know today, is constructed by the best Bukhara architects of the time and Russian engineers. The architecture of the current palace is constructed with Russian influence, blended with traditional Persian-Bukharan architecture, these are due to the increasing impact of the modern-Russian influence that the Emir had while still trying to maintain its traditional roots. Resulting in a beautiful palace that symbolizes a blend of two societies and two architectural styles. The palace features a grand white hall, where it is decorated with mirrors, imported furniture, and a huge chandelier. There’s also a banquet hall, a chess room, and a teahouse that are decorated with luxury furniture and the Emir's collections. Nowadays, you can also visit the guesthouse that has been transformed into a national costume exhibition and a zoo at the back of the palace. 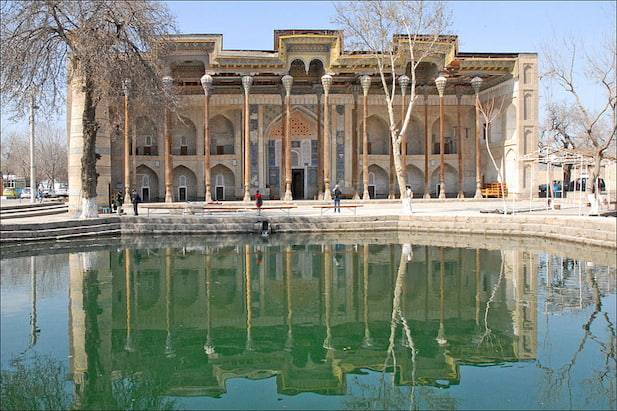 Bolo Khauz Mosque is the definition of where beauty meets functionality. Built-in 1712, the mosque is an example of early modern engineering. The mosque is able to withstand and adapt to the extreme environment and climate of Bukhara, giving a controlled and regulated temperature within the mosque, whether during the heat of summer or the chills of winter. The mosque is also listed in the UNESCO World Heritage Site as a part of Bukhara and also functions as the personal prayer hall during the Emir’s visit.

The mosque is designed in an Islamic-central Asian style with bulged roof, Iranian muqarnas, and strong Persian influence, especially on its 12 meters of floor-to-ceiling wooden columns. The design of the mosque also enables two different areas to be used for prayers where the 20-columned iwan is used during the summer and the domed chamber for the winters. You’ll also be greeted by a minaret that was built in 1917 and a howz/pool in the front part of the mosque. 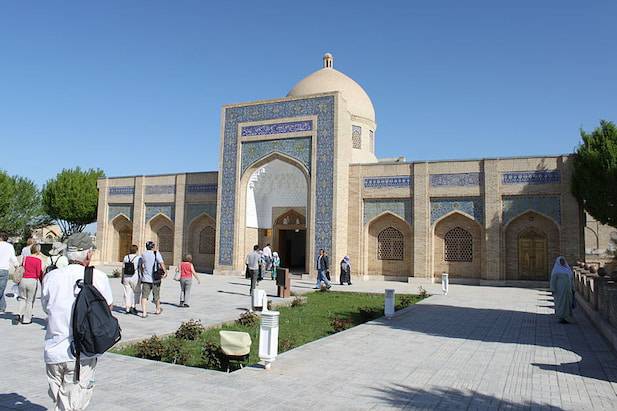 In this complex, lies one of the most important and greatly respected theologists of the 14th century, Sheikh Bahouddin Naqshbandi. During his life, he would serve as a spiritual teacher for rulers of Bukhara, including Amir Timur. He would also be famous for his modest demeanor and his life philosophy "The heart - with the God, hands at work" amongst the people of Bukhara. His teachings would then affect Islam in the upcoming years, especially in Uzbekistan and the neighboring Islamic countries, hence a necropolis is built in that location to respect his legacies.

During your visit, you’ll be greeted with a courtyard that leads to a large mausoleum where you can see the ancient gravestone of the sheikh that is created by marble blocks. The complex is also home to 2 mosques (Khakim Kushbegi and Muzaffarkhan), a khanqah, and a madrasa. Searching for pieces of information regarding the site or the era during the Sheikh’s influence? Don’t forget to visit the museum that is located within the complex!

There you have it! These are attractions that you must visit during your trip to Bukhara and make your trip much more worth it. Download the HalalTrip Mobile App to find all the mosques and halal restaurants nearby and have a better travel experience as a Muslim.