Islam is one of the religions that has a large number of followers in the world. Nearly every country has adherents of Islam. The mosque is the place of worship for Muslims in every country, so it is not surprising that there is one in every country.

The basic design of mosques is that they are often made large and magnificent since they are used as worship places by many people. Some offer very intricate patterns and designs.

The grandeur and size of the mosque building can see from the architectural form and interior details, so the mosque will feel comfortable when used for worship.

Not infrequently mosques are made so beautiful, unique, and interesting. Some mosques have historical values ​​and a very long Muslim civilization.

Then which mosques are interesting to visit other than for worship, HalalTrip presents 10 mosques for you, along with the information. 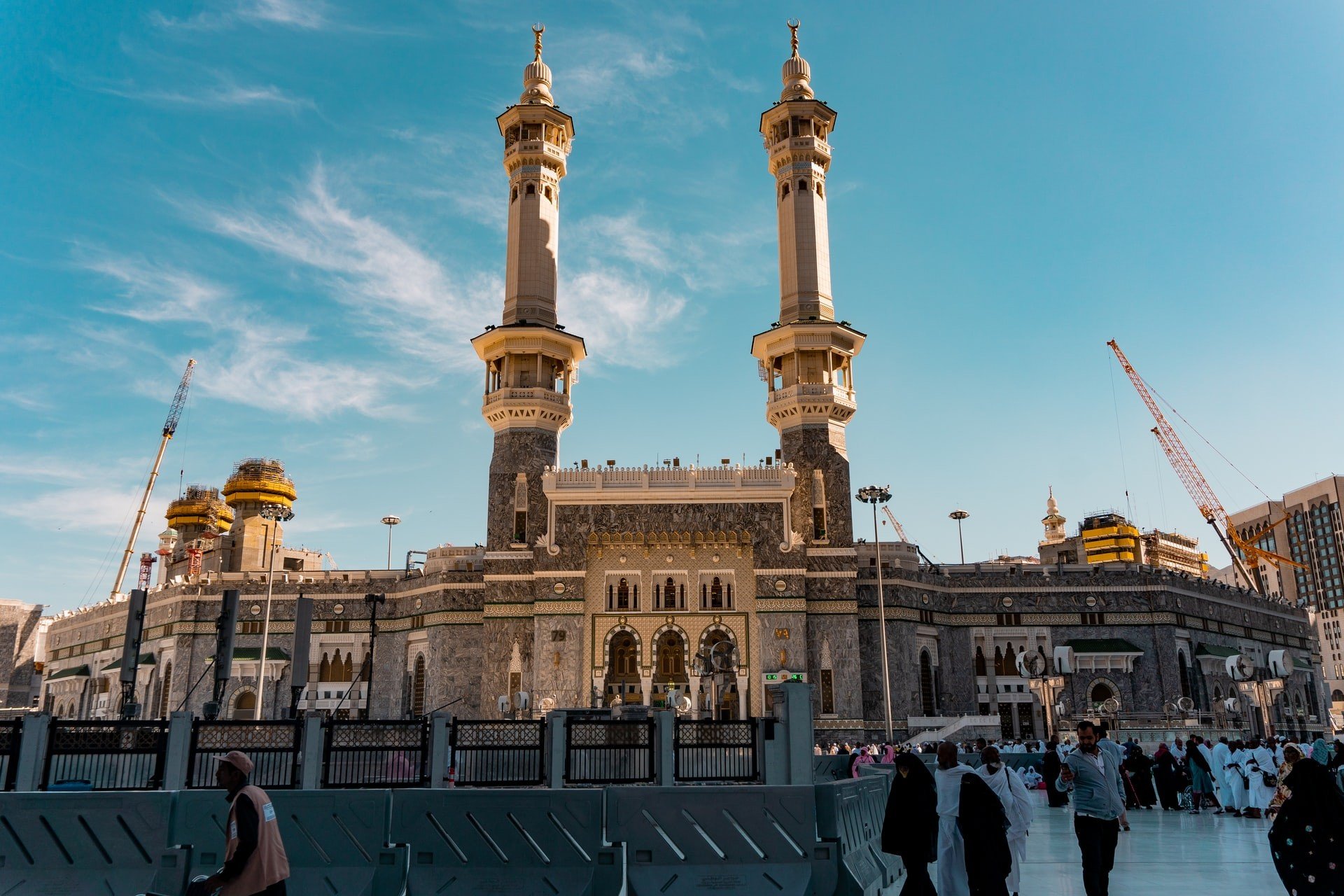 Unfortunately, during the covid pandemic, 19 mosques were closed to the public, in the end of 2021 the area of ​​the Grand Mosque began to open to a limited group, hopefully in 2022 had to be opened and visited for all Muslims.

The Kaaba is located here, and it is the qibla of all Muslims. The Kaaba is a cube-shaped building made from stone and covered with black cloth. It measures 13 meters long, 11 meters wide, and 12 meters high.

This mosque has a long history written in the Qur'an as the first place of worship built to worship God. In its history, the Kaaba has built by Prophet Ishmael with the help of his son, Prophet Ibrahim. It was not until the time of the Prophet Muhammad that Islam became perfected, and pilgrimage became one of the Pillars of Islam.

The Grand Mosque is not only the largest in the world but is also considered the holiest. This mosque can accommodate up to four million people during the Hajj season as well as other Muslim activities. And the most important thing is that the prayers in this mosque have priority, by following per under the hadith of the Prophet Muhammad: Prayers in the Holy Mosque are more important than 100,000 prayers in other mosques." (Narrated by Ahmad and Ibn Majah no. 1406, from Jabir bin ‘Abdillah) 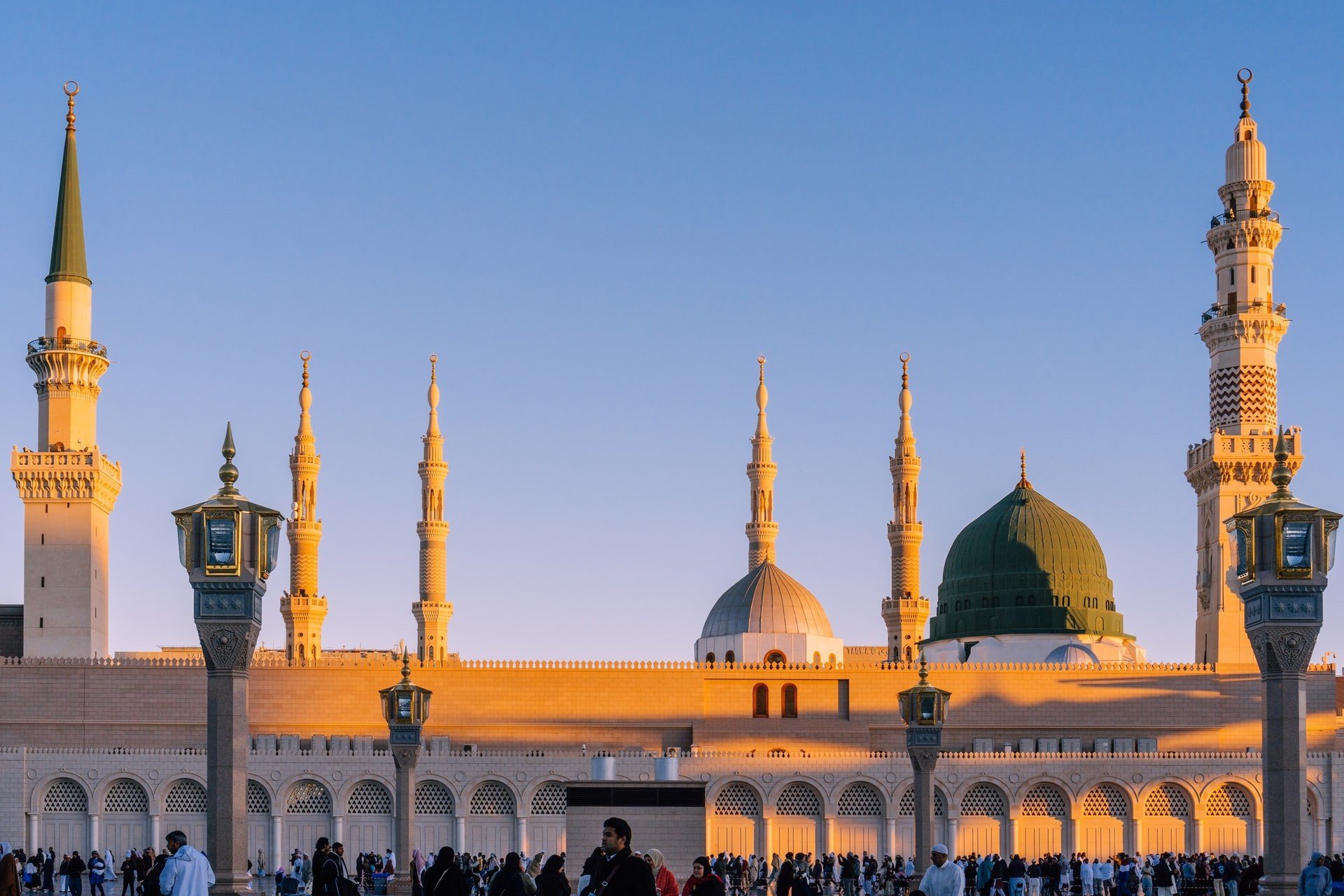 This mosque was previously the house of the Prophet Muhammad SAW, which he lived after moving from Mecca to Medina and was his final resting place.

The mosque building was built without a roof. However, for the convenience of the congregation, hundreds of large beautiful hydraulic umbrellas were placed in the courtyard area of ​​the Prophet's Mosque.

The umbrellas will be opened when the weather is hot. In winter, the umbrellas made in Germany are closed.

Not only makes the congregation more comfortable, but this umbrella also enhances the appearance of the Prophet's Mosque and becomes a very interesting photo spot for visitors.

"Prayer in my mosque (Nabawi Mosque) is better than 1000 prayers in other mosques besides Masjidil Haram," The Prophet sallallaahu 'alaihi wa sallam said. (Narrated by Bukhari no. 1190 and Muslim no. 1394, from Abu Hurairah) 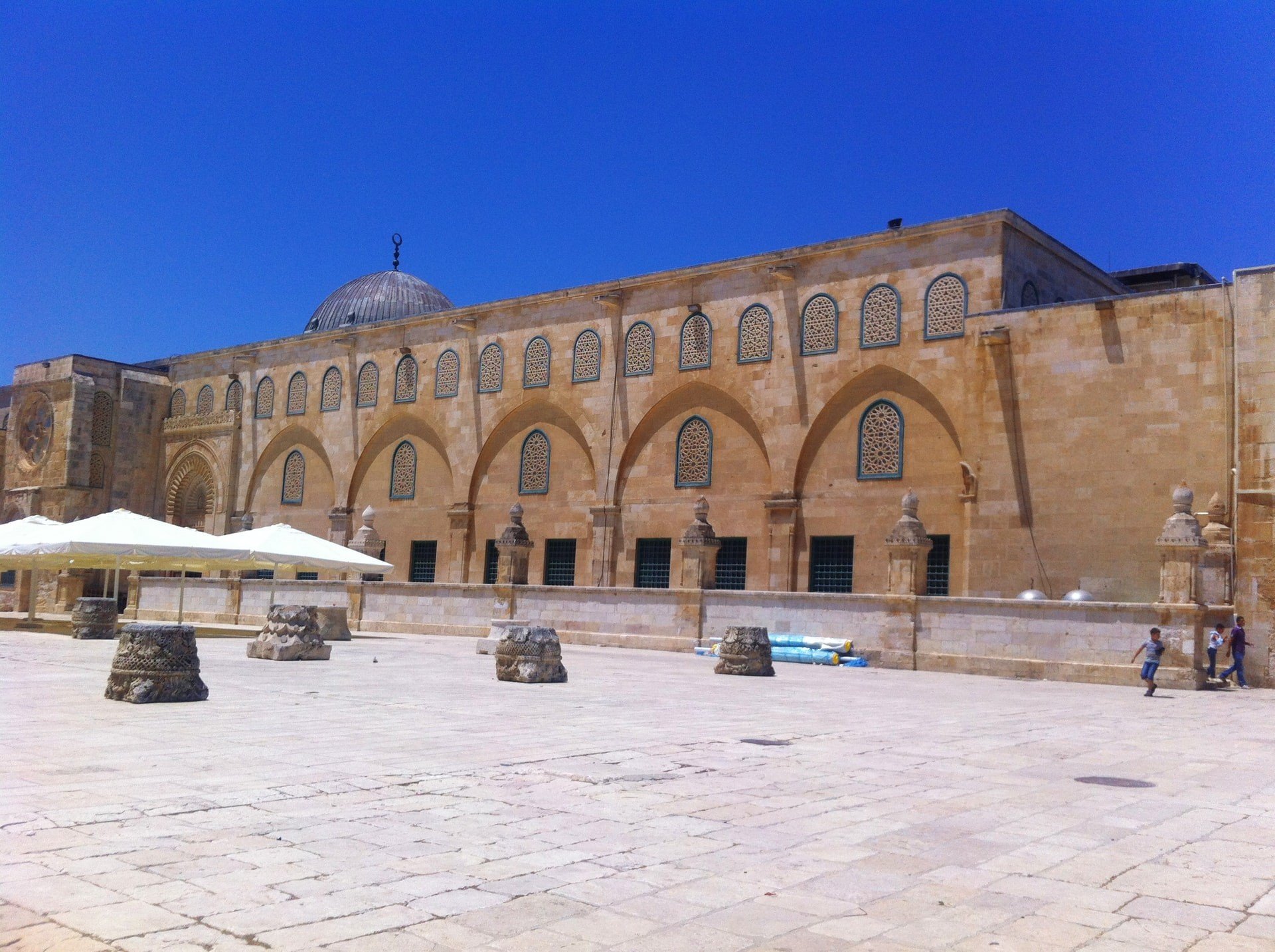 Al-Aqsa Mosque is the second oldest mosque in the world after the Grand Mosque in Makkah. The Aqsa Mosque is a sacred site for Muslims. This building has been a silent witness to the conflict between Palestine and Israel since ancient times.

According to Aljazeera, Al-Aqsa occupies a 35-hectare complex, known as al-Haram al-Sharif to Muslims and a Temple Mount to Jews.

The complex is located in the Old City of Jerusalem, which has been designated a World Heritage Site by the United Nations Cultural Organization, UNESCO.

Al-Aqsa Mosque is the first qibla for Muslims. Before heading to the Kaaba during prayers, Muslims used to turn towards the Holy Place in Jerusalem where Al-Aqsa is located.

However, the Prophet Muhammad received instructions from Allah to move the qibla towards the Kaaba which is in the Holy Mosque, Makkah. 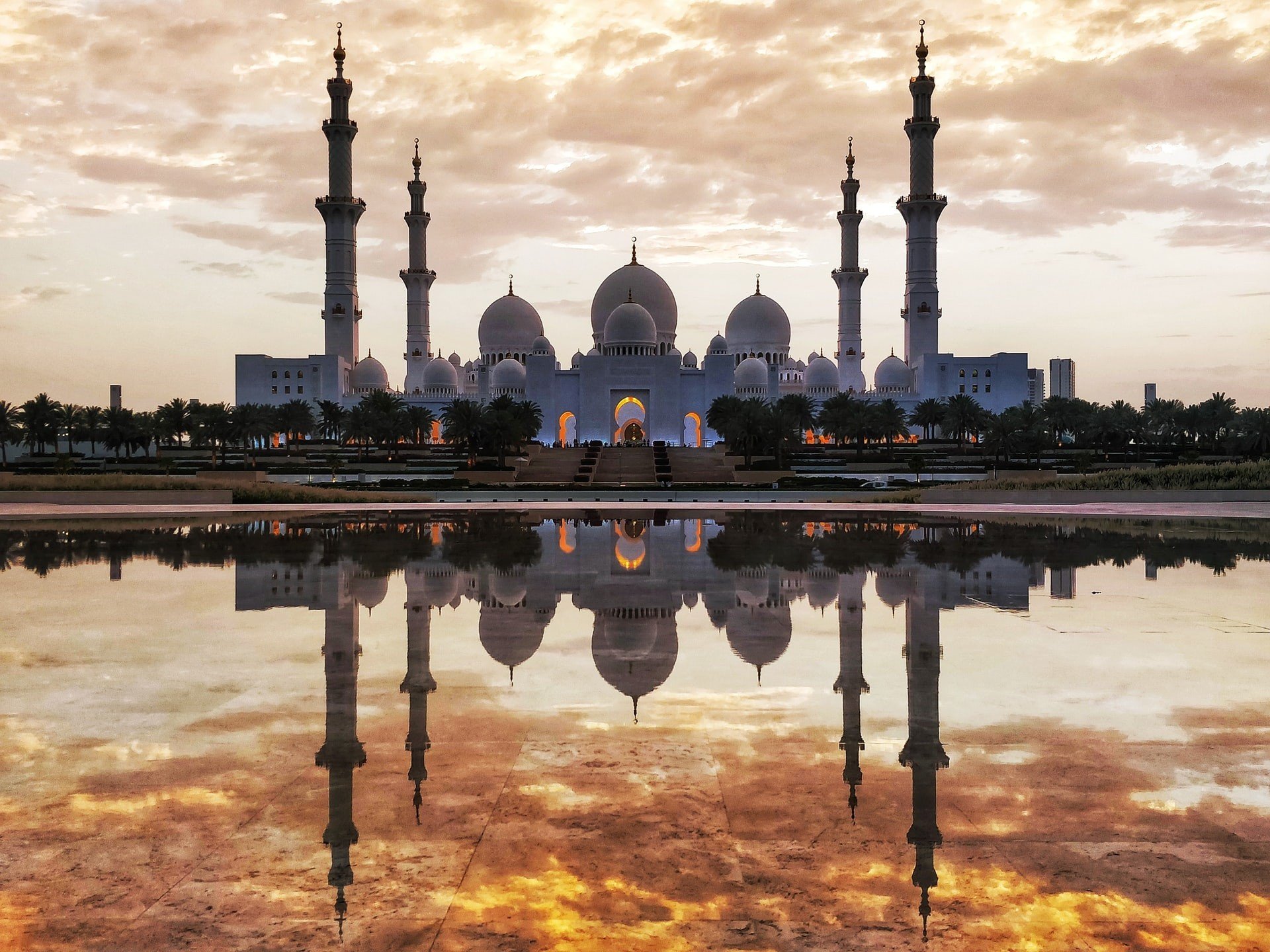 The Sheikh Zayed Grand Mosque is very luxurious and very majestic with 82 domed buildings in the mosque. The domes that made from white marble, and there are inlaid with semi-precious gems.

Inside the mosque, there are also 7 chandeliers made of Swarovski crystal and plated with 24-carat gold.

In the main prayer hall, there is a large and very soft carpet. The walls and ceilings of the mosque have intricate floral patterns. The patterns are the work of Kevin Dean, an illustrator from England. 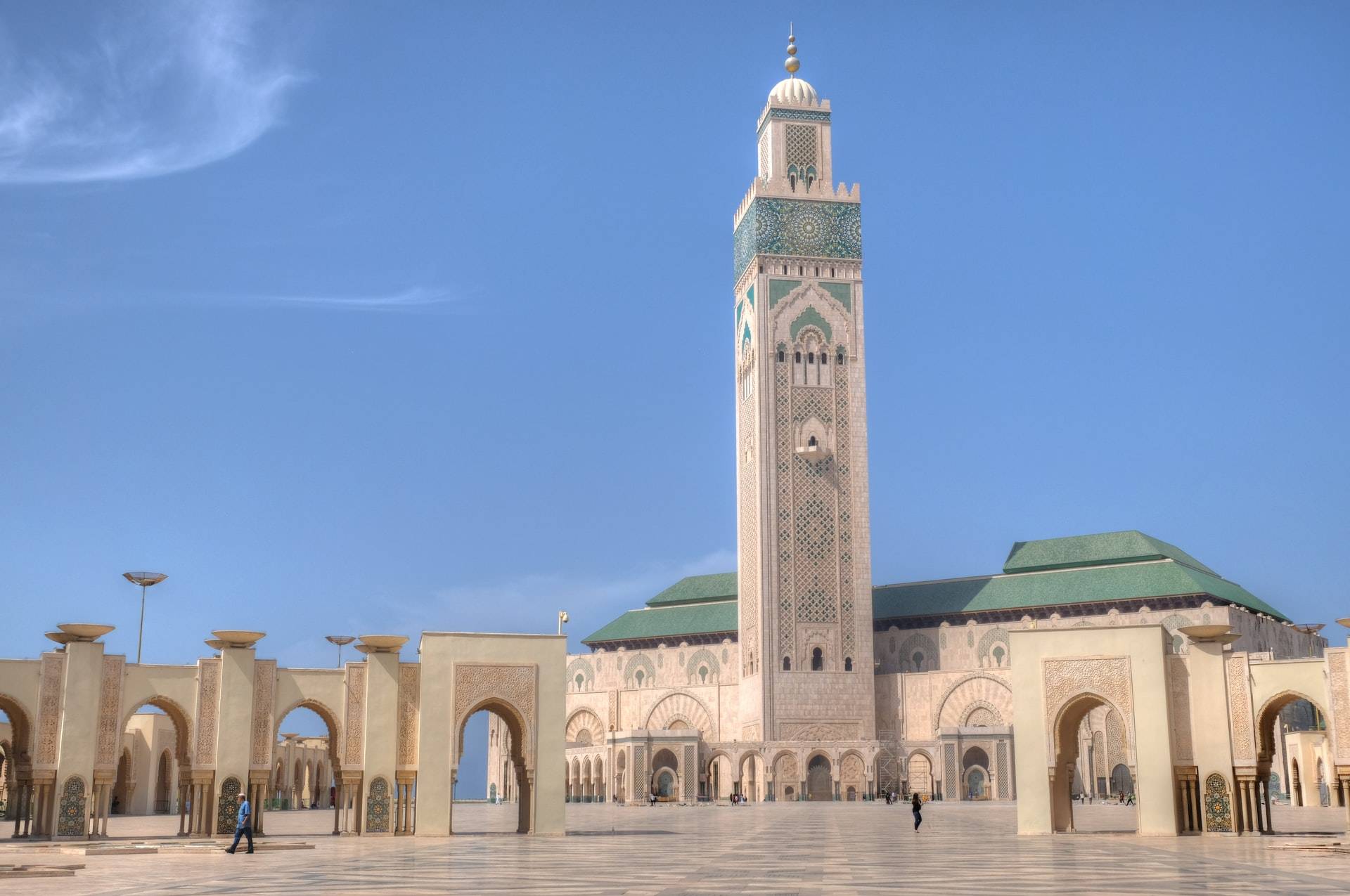 Hassan II Mosque, located in the city of Casablanca, Morocco, is very special. The mosque can accommodate 100 thousand worshipers is also nicknamed the Throne of God on the Water or the Floating Mosque because the building juts into the Atlantic Ocean. The mosque, designed by French architect Michel Pinseau, was completed in 1993.

This mosque has asked to be the largest mosque in Morocco as well as the seventh-largest in the world. As many as 6,000 Moroccan artists were involved in the construction of this magnificent mosque.

The most impressive thing is the use of advanced technology, including laser lighting at night, floor heating, automatic doors, and an openable dome to show the beauty of the Moroccan night sky.

With a luxurious and majestic design, the mosque to be estimated to cost up to USD 800 million or more than 11 trillion rupiah. This mosque had the title of the most expensive mosque in the world. 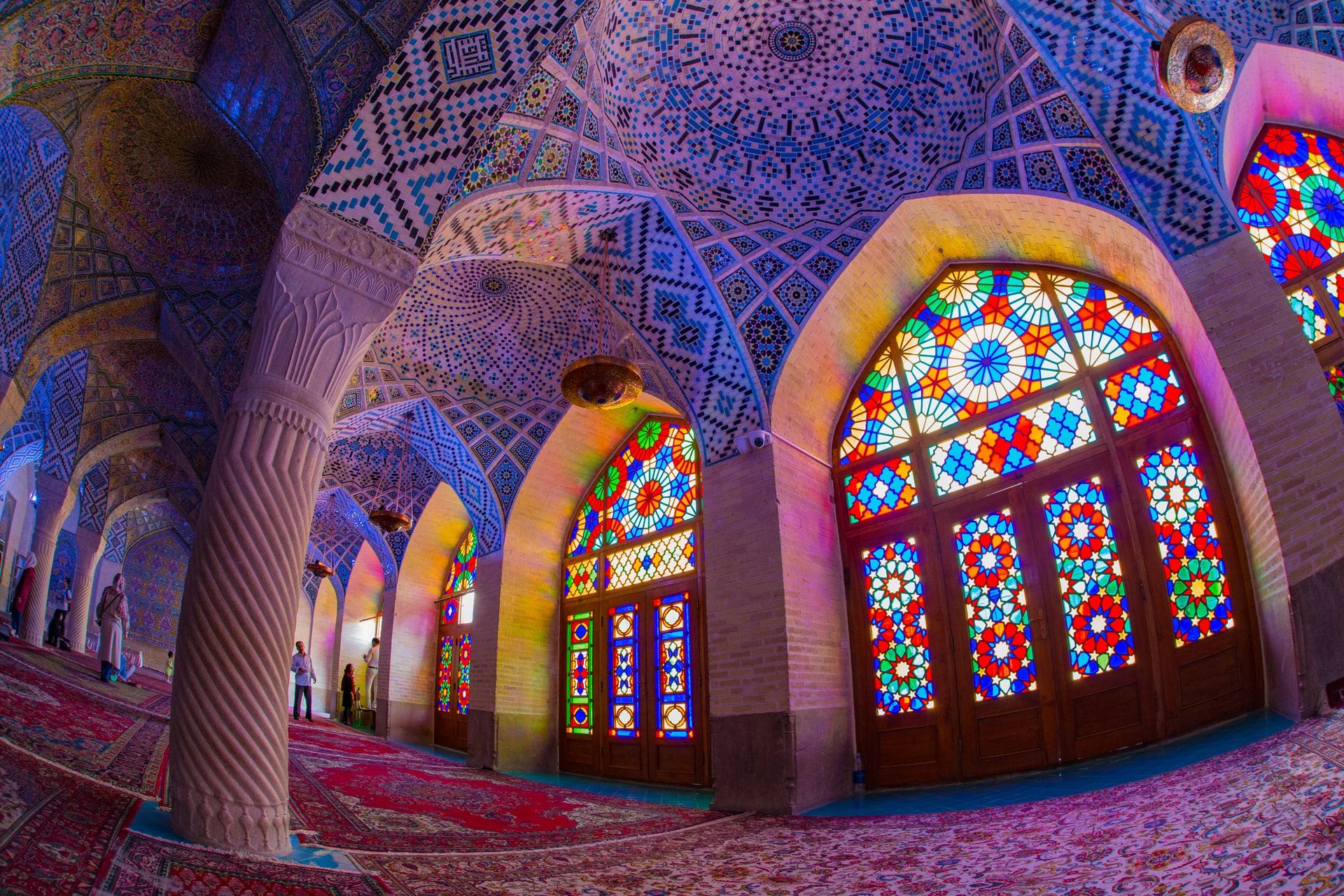 The interior of the Nasir Al-Mulk Mosque will make visitors feel amazed and stunned. The mosque uses many elements of colorful stained glass and will look beautiful when sunlight penetrates the glass so that light reflections appear like a rainbow.

The mosque construction, which began during the reign of King Mirza Hasan 'Ali Nasir al-Mulk of the Qajar Dynasty, took 12 years to complete. This mosque is also often dubbed the Pink Mosque or the Pink Mosque because the floor and ceiling are decorated with beautiful ornaments and dominated by pink. 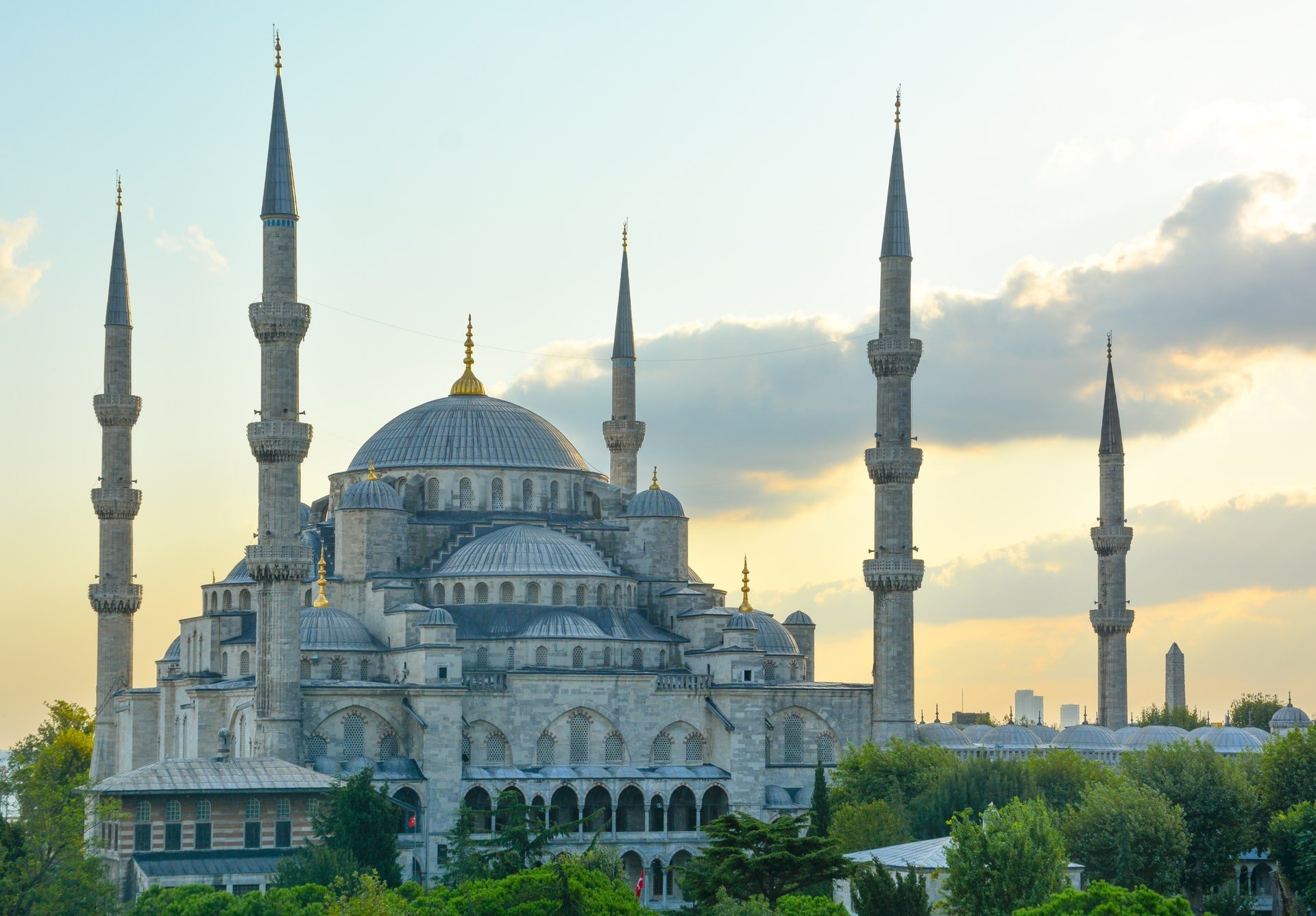 Another curious mosque to visit is the Sultan Ahmed Mosque in Turkey. Known as The Blue Mosque, this mosque has built under the reign of the Ottoman ruler Ahmed I between 1609 and 1616 in a series of domes and half domes. This mosque is called the Blue Mosque because of its large blue domes.

This mosque will already see its beauty when seen from a distance. Not only the beautiful mosque also looks so magnificent. The Sultan Ahmed Mosque has six large minarets. The large domes had made of blue Iznik tiles.

The ceiling of the mosque sparkles with 20,000 handcrafted blue Iznik (Ancient Nicaea) tiles that feature flowers, trees, and abstract patterns of more than fifty different designs arranged in harmonious harmony with a majestic central dome. 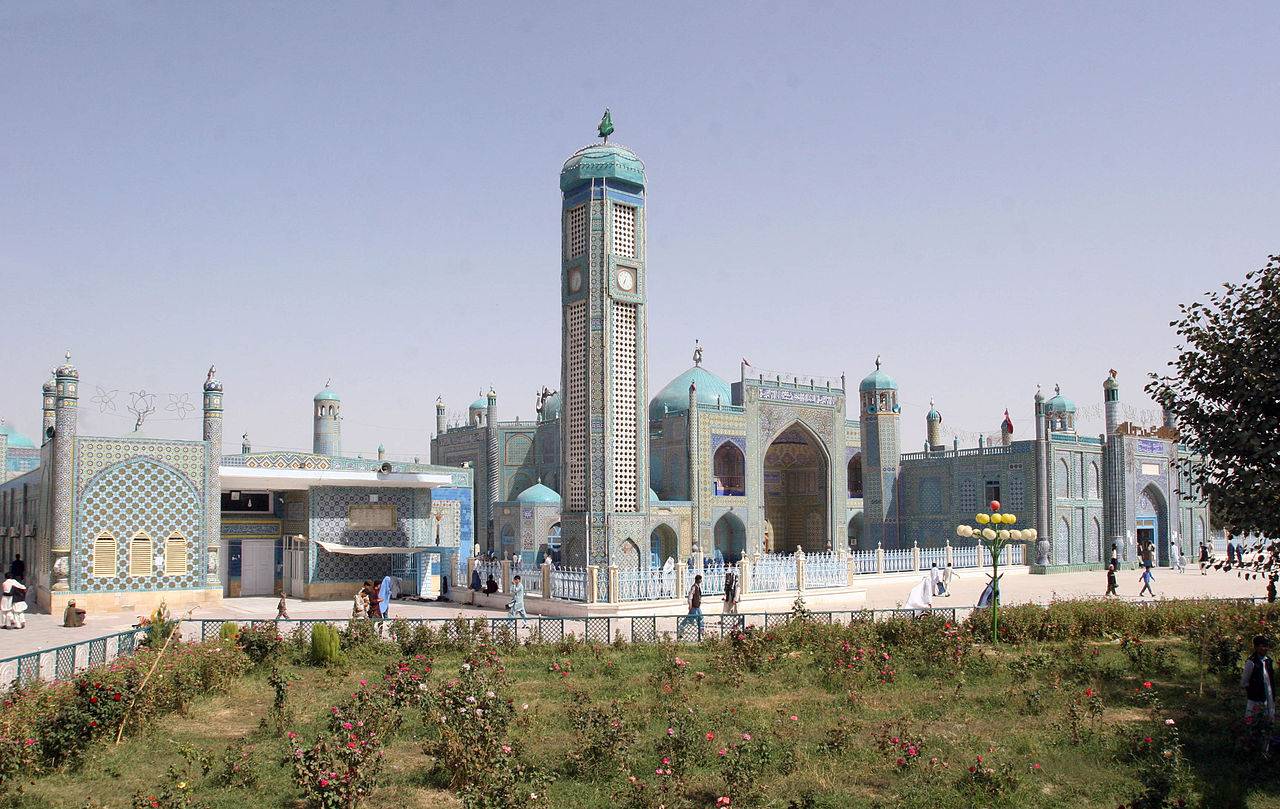 There is a lot of stories from this mosque. In 1220 AD, this mosque has torn down by Genghis Khan. It was because of the fighting around the area. Sultan Husayn Mirza the Timurid King was renovated this mosque again in the 15th century. The architecture that carried after the renovation ware dominated by blue. 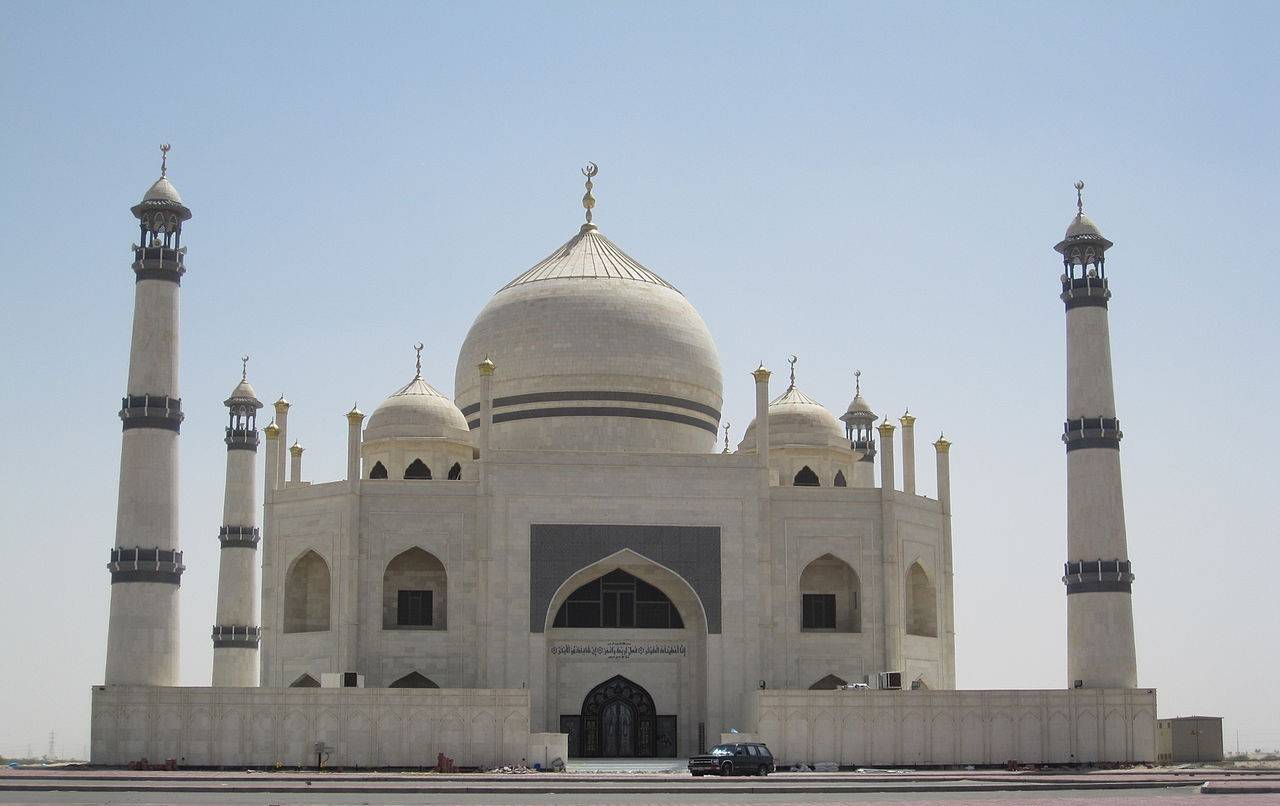 The location of this mosque is in the city of Kuwait, precisely close to the Kuwait International Airport. The mosque, named Siddiqah Fatimah Az-Zahra, began construction in 2008 and was completed in 2011.

This mosque has a total area of ​​3,200 square meters. The capacity of visitors or worshipers for men is 3,500 people and 500 people for women. The location between male and female worshipers is also separated. For the parking area, this beautiful mosque can accommodate about 1,000 visitor cars. 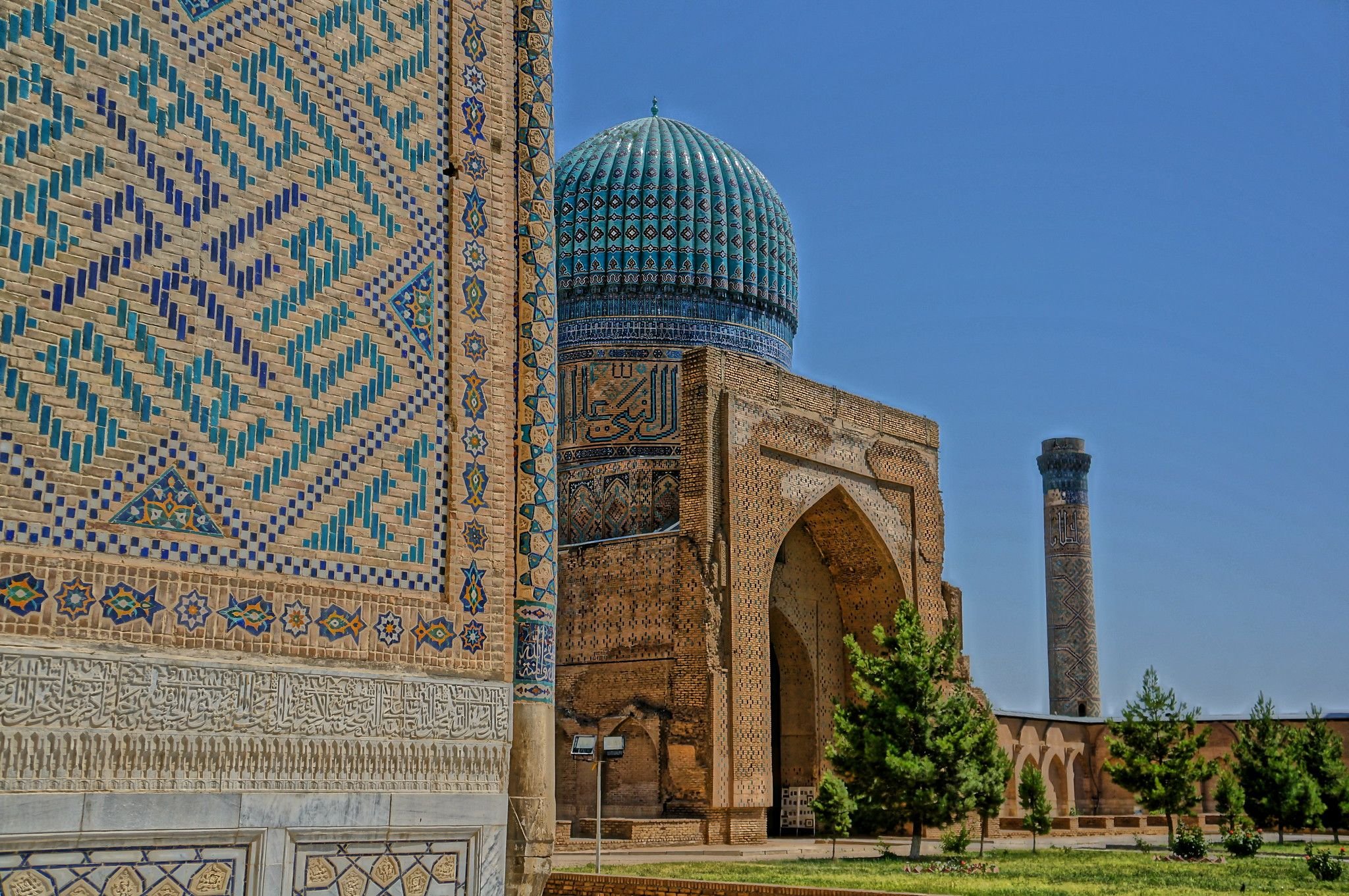 The Bibi Khanym Mosque has built during the reign of Timur Lenk. In 1399, he ordered to build a Jami mosque that was magnificent, large, beautiful, and worthy of the capital city of his reign. The construction of this mosque has completed in five years in 1404.

The newly built mosque was named the Bibi Khanym Mosque. This name has taken from the name of Timur Lenk's wife that comes from China. As a symbol of his love for the empress.

In his day, the Bibi Khanym Mosque was the tallest building in the world. By having the size of a large rectangular mosque with 109 x 167 square meters. The tower part is attached to the largest portal (main gate). The height reaches 19 meters, while the gate is 35 meters high.

That is worth-to visit-list of mosques, with various features, ranging from the virtues of worship, uniqueness, beauty and, historical values of civilization, then up to you which one you want to choose.