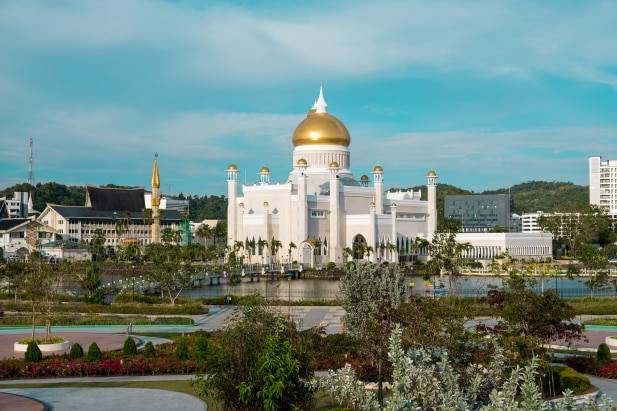 Omar Ali Saifuddien Mosque is a mosque located in Bandar Seri Begawan that was built in 1958 and named after Omar Ali Saifuddien III, the 28th Sultan of Brunei. It is deemed as the country’s national mosque (alongside Jame' Asr Hassanil Bolkiah Mosque) being one of the oldest and largest mosques in the country. The mosque also serves as the symbol of Islam in Brunei not just serving as a place of worship but also a tourist attraction, and a major historical site too. 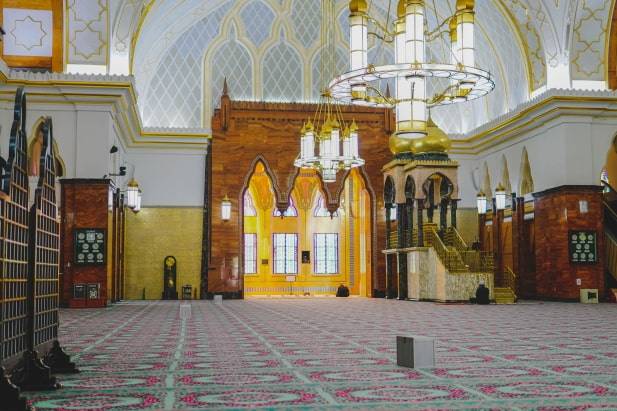 The mosque is built under the influence of Mughal and Italian design languages in its architecture. The mosque sits in a man-made lagoon along with the significant ceremonial barge on the banks of the Brunei River. The main dome of the mosque is covered in pure gold while its minaret is the highest standing building in the city, towering at 52-meters high. A fun fact is that the minaret will always be the tallest building to ensure Omar Ali Saifuddien Mosque is always visible around Bandar Seri Bengawan. It also incorporates marbles and granites in its interior and column, with crystal chandeliers all over the ceiling. 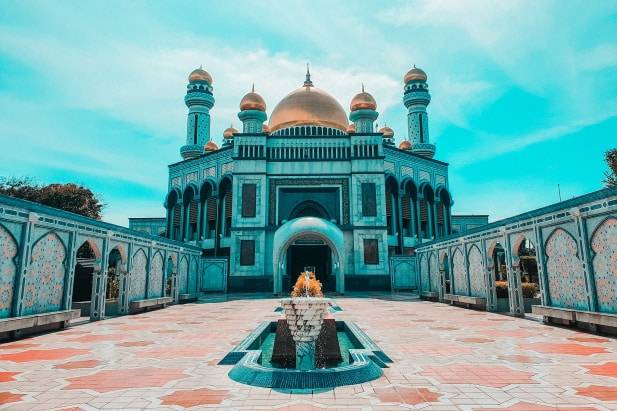 Jame' Asr Hassanil Bolkiah Mosque is a mosque located in Bandar Seri Begawan, finished in 1994, and is named after Hassanal Bolkiah, the 29th and current Sultan. It is also one of the national mosques and is completed to celebrate the monarchy’s 25th year of rule and the birthday of the Sultan. It is built under the waqf fund of the Sultan and is the largest mosque in the country. 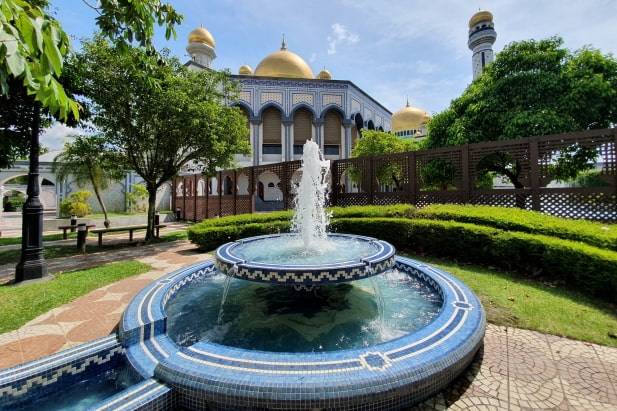 As the largest mosque in the country, it is able to accommodate 4,000-5,000 worshippers at a time. The mosque is also built from the finest imported materials such as hardwood, marble, carpets, and of course gold. It also has 29 golden domes in order to honor the 29th Sultan of Brunei. The mosque also has certain rules for visitors to follow; where silence must be observed at all times, shoes to be taken off, and robes offered at the mosque must be donned during the visit. 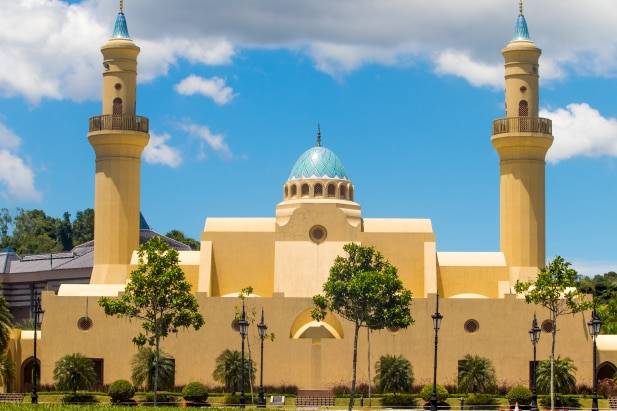 The Ash Shaliheen Mosque is a mosque built in 2012, designed by the legendary architect Abdel-Wahed El-Wakil. It is designed according to the New Classical movement with Moroccan influence in its structural style. 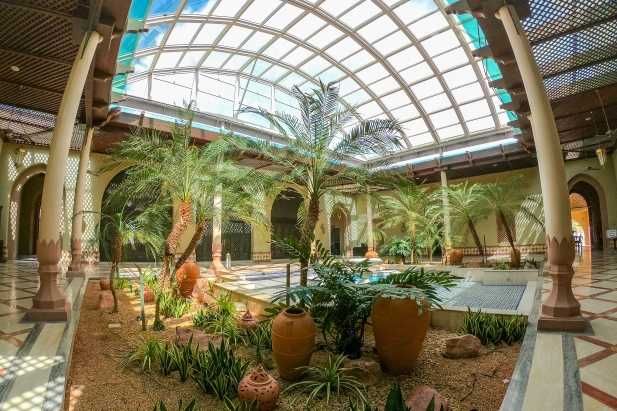 The mosque features a glass retractable roof for a cooling shade, brass light fixtures, Zellige mosaic, and some Arab-inspired pottery in the open courtyard with its own marble fountain. The mosque is also spacious enough to host 1,000 worshippers at a time. 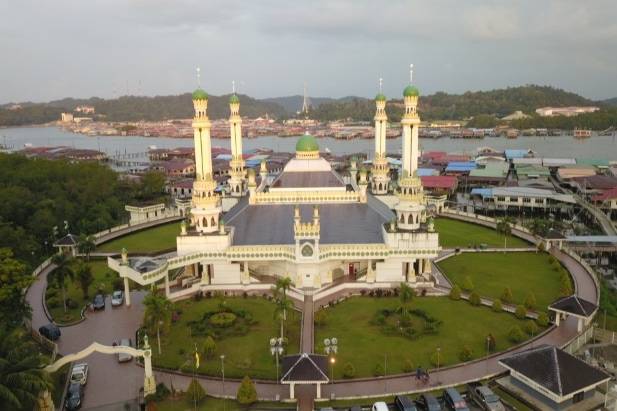 Al-Muhtadee Billah Mosque is a mosque built in 1987, named after the current crown prince. It is one of the most unique mosques in the country as it is floating above the water! Located in the Kampong Sungai Kebun near Kampong Ayer, it was built on the riverbank of the Brunei River, therefore making it possible to access the mosque both by foot or car through the Raja Isteri Pengiran Anak Hajah Saleha (RIPAS) bridge, or by boat. The mosque itself has a capacity of 1,100 worshippers at a time. 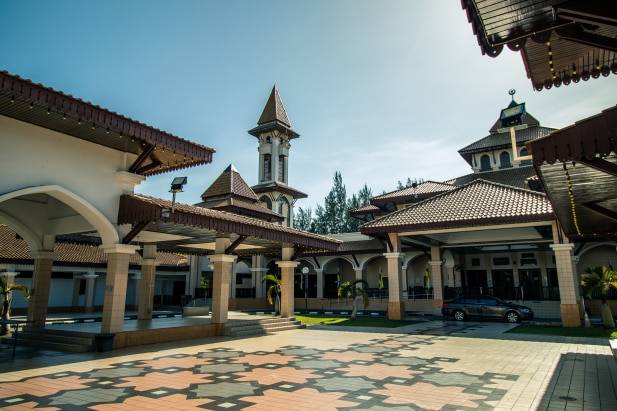 Universiti Brunei Darussalam Mosque, also known as UBD Mosque, is a mosque located on the premise of the University. It was finished in 1994 and is able to accommodate around 1,800 worshippers. The design of the mosque was inspired by the traditional Malay architectural style, hence the unique and attractive architecture of having no domes. 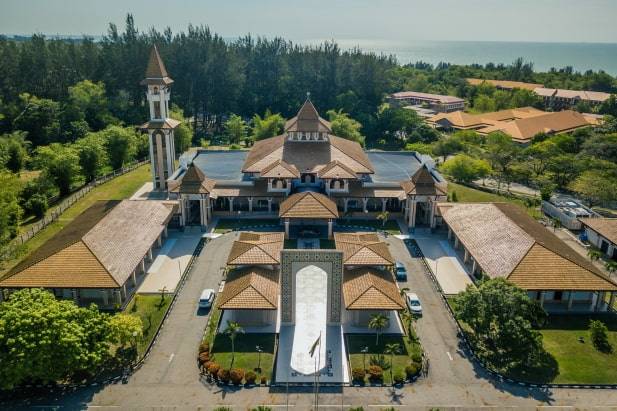 When entering the mosque, you’ll be greeted with a huge main gate that is decorated with Islamic decorations and inscriptions. You can find the mosque next to the Faculty of Science, right across from the male residential college. 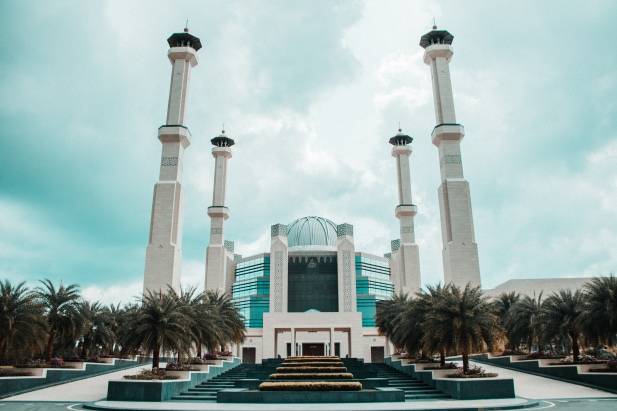 Balai Khazanah Islam Sultan Haji Hassanal Bolkiah is the newest museum to open its doors to the public. Completed in 2018, the Balai Khazanah Islam was dedicated to showcasing the personal collections of the Sultan, which include priceless artifacts, manuscripts, Qurans, and more, spread across the nine main galleries within the center.

In addition to just being a museum, the Balai Khazanah Islam also houses a research center aspiring to be the main repository of dissemination and collection of scholarly Islamic scholarly works. It aims to research and spread knowledge in the field of Islamic heritage.

The design of the Balai Khazanah Islam is based on the Brunei Malay Islamic Monarchy architecture, with the 60-meter-high towers made to echo the local minaret designs that are prominent landmarks around the area. Be in awe when you step into the center with the beautiful atrium that mimics the large prayer halls of local mosques. The atrium also has a large multi-story glass wall enclosure and translucent glass bridges. 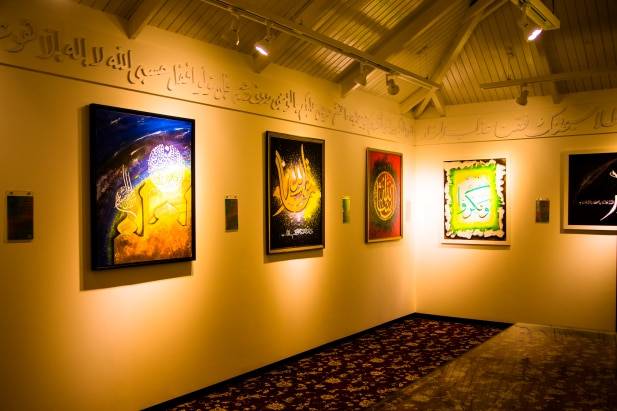 The Islamic Calligraphy and Art Study Centre was launched in 2013 in order to serve as the first center for Islamic art education by offering courses, workshops, and seminars. The center provides learning for Islamic arts such as Islamic calligraphy and decoration arts. Short courses are also available to join which is worth trying during your visit!

There are three galleries within the center which are Lauhah Al-Islamiah Gallery (showcasing international art and artifacts in Khat and illumination, known as Zukhruf artwork), Al-Aswad Gallery (exhibiting arts, artifacts, and the writing processes of Jawi using hologram technology), and At-Tasmeem Gallery (displaying interior designs in collaboration with local entrepreneurs). They also have their own souvenir shop called Semaun, so make sure to take home your own Islamic-themed products and souvenirs. 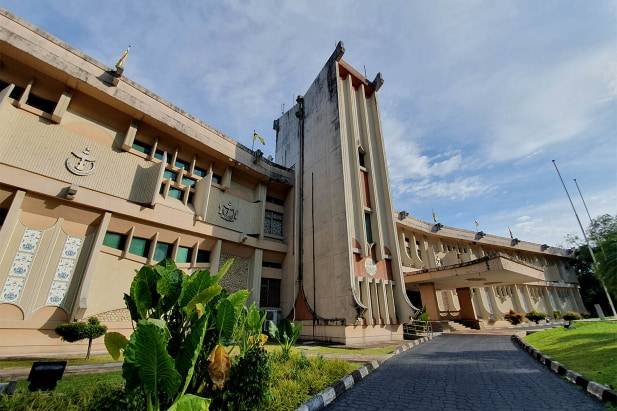 The Brunei Museum was established in 1965 before being relocated to Kota Batu. It was inaugurated by Queen Elizabeth II in 1972 as a permanent site. With a total area of 4,440 m2, the museum is decorated with traditional Malay motifs and has a number of galleries that includes Islamic art and a natural history gallery.

The gallery displays artifacts, gold and silver coins, miniature manuscripts of the Quran, textiles, ornaments, weaponry, and several other collections. The museum also showcases the oil industry and its impact on the economy of Brunei. The artifacts in the museum are mostly personal collections of the Sultan. The museum is currently undergoing major renovations, making way for modern technology and new open-concept redesigns to ensure you an interactive experience worth visiting. Do look forward to its reopening!