How do you go to Dubai and not visit the Burj? Well, the answer is simple…You just can’t especially with the Burj being one of the very first buildings that will catch your attention immediately upon entering the mesmerizing city of Dubai. Originally called the Burj Dubai, the structure was later renamed the Burj Khalifa as a tribute to Sheik Khalifa from Abu Dhabi for assisting Dubai out of its financial crisis.

How Tall is the Burj Khalifa? 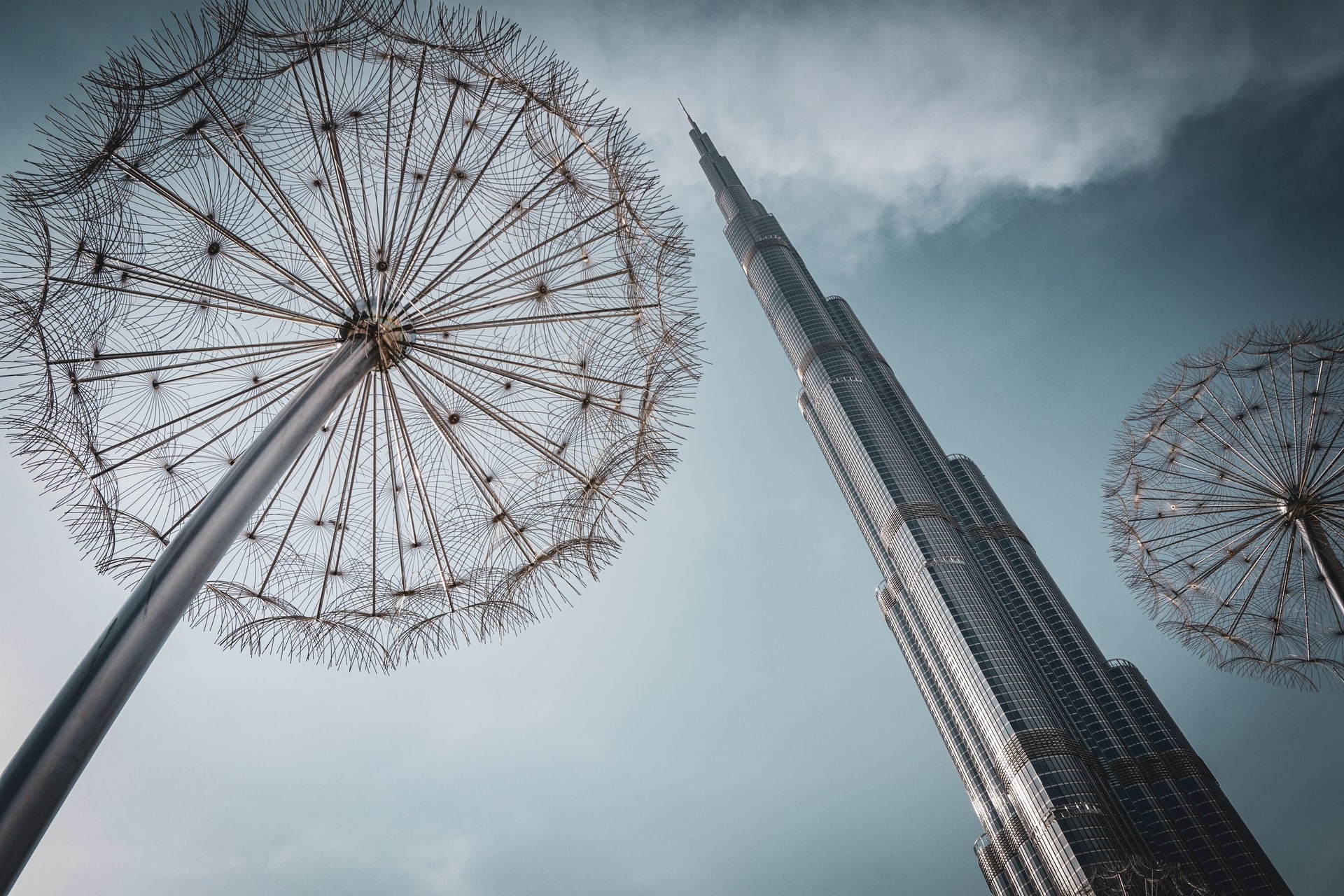 Towering at 828 meters this impressive piece of architecture is the unique background to the infamous Dubai Mall and Dancing Fountains and is impeccably placed in Burj Park. Completed in 2010 by Skidmore, Owings & Merrill LLP (SOM) the Burj holds many impressive records. Apart from being the world’s tallest building, it has the highest observation deck in the world meaning that spectacular views of the Arabian Gulf can be viewed from this unique vantage point.

Although the highest floor reaches level 163, the observation decks can be found on the 124th and 125th floor. Using the world’s fastest elevators that travel at an impressive speed of 10 meters per second one can enjoy both the world below as well as the growing skyline of Dubai from these glamorous viewing points within a minute – that is how long it takes from the ground level to level 124. At least 14 people can comfortably fit into the double cab elevators and the ride itself has also been recorded as being the longest elevator distance from the ground to the top floor.

On the 125th floor, a new twist has been introduced on the already existing glass floor which now also includes a Virtual Reality Experience. Emaar (The owners of Burj Khalifa) in conjunction with DigiComm has installed a number of sensors on the floor so that when a person triggers one of these sensors the glass starts to crack, which is all virtual of course. It’s a fun little gimmick but it can go either way… It could be an absolutely thrilling experience or could scare the daylights out of you.

If you choose to venture even higher, you will find the Burj Khalifa Sky on the 148th floor which is an additional premium viewing deck. Ticket slots are available hourly and can be booked via the official website. The ticket prices vary depending on the time slots- so a sunset timeslot would naturally be more expensive. 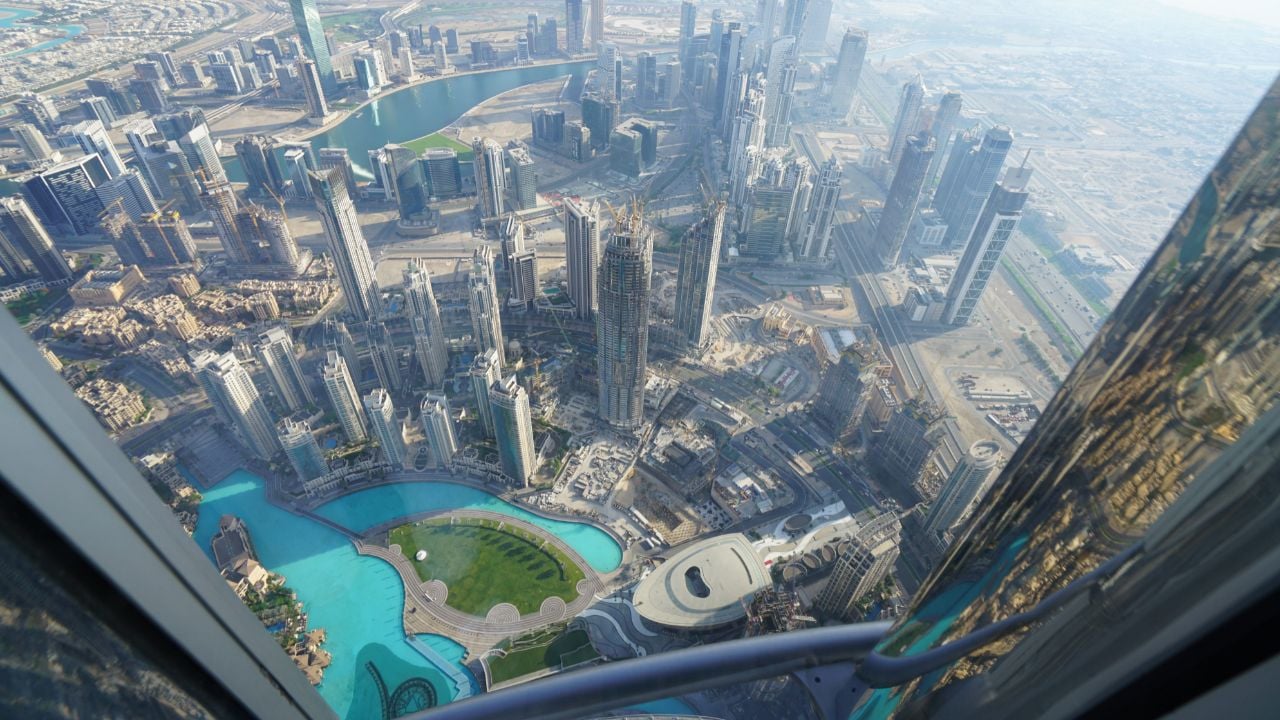 Get more information on the Burj Khalifa here! 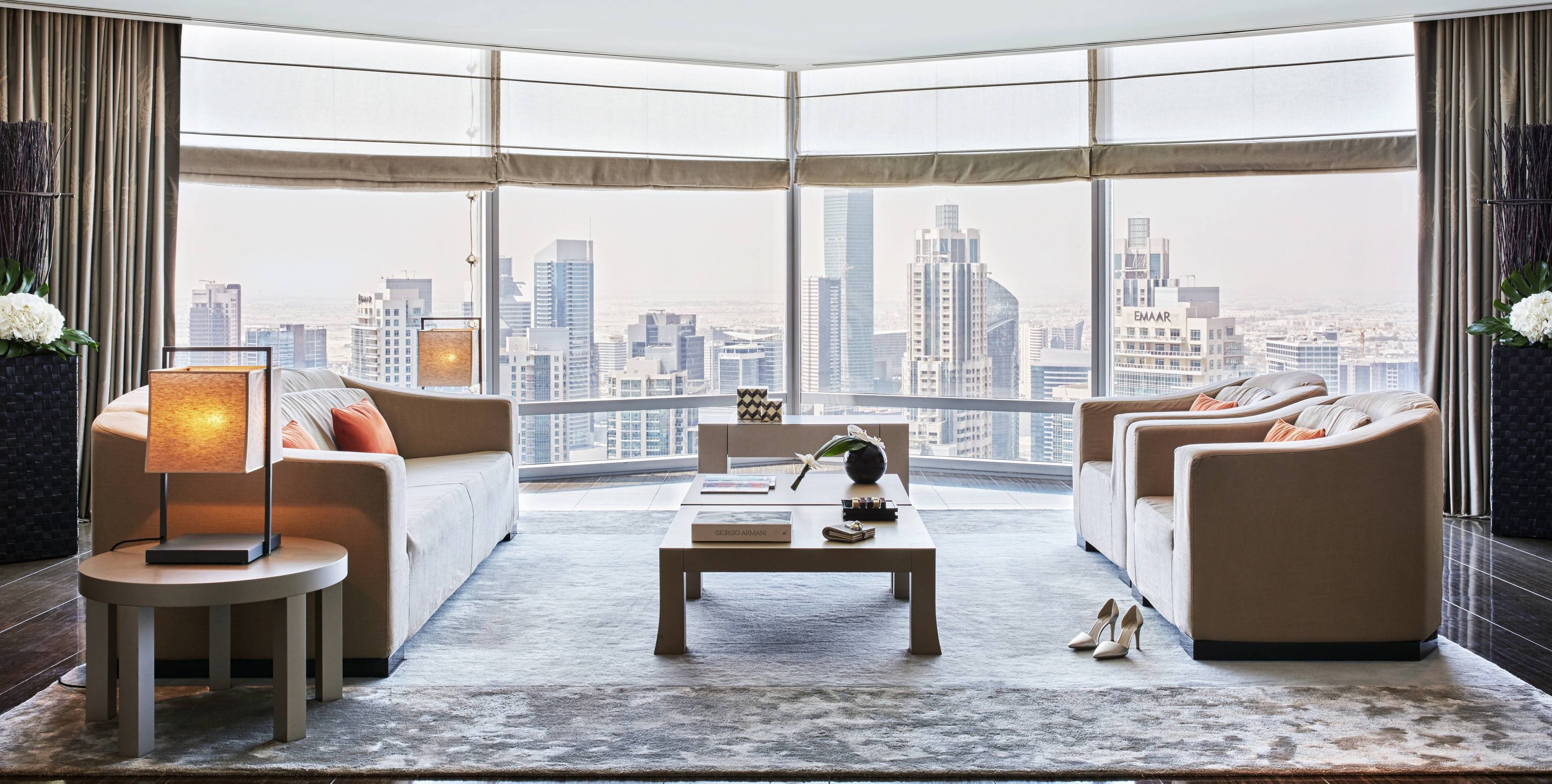 The Concourse level to level 8 and level 38 and 39 feature the Armani Hotel Dubai which is meant to showcase the style palate of leading fashion icon Giorgio Armani. Despite the impeccable taste that can be found around the hotel, the hotel is devoutly dedicated to going green and is actually GREEN GLOBE certified meaning that it tries to promote sustainable living to its fullest. The hotel houses a spa, a confectionary for sweet treats, a shop that allows for upper-end couture shopping, and a florist for bespoke flower arrangements. There are also a number of restaurants each specializing in their own global cuisine to satisfy an array of appetites. Obviously, this is no normal hotel so with amenities and views like these you are looking at about 2000 dirhams for a 45sq meter room which is a pretty penny to pay for a single night.

In addition, the Burj possesses the highest living quarters in the world meaning that these lucky people wake up each day to a morning literally in the clouds. On Levels 9 to 16, you will find the luxurious Armani Residence Apartments with apartments accommodating up to 4 bedrooms. The residents get to enjoy their own viewing decks and swimming pools and obviously spectacular views as well. Additional private residences can also be found on floors 45 to 108 with the remaining floors comprising of Corporate rooms. The top four floors have been reserved for communications and broadcasting and occupy the levels just below the spire. 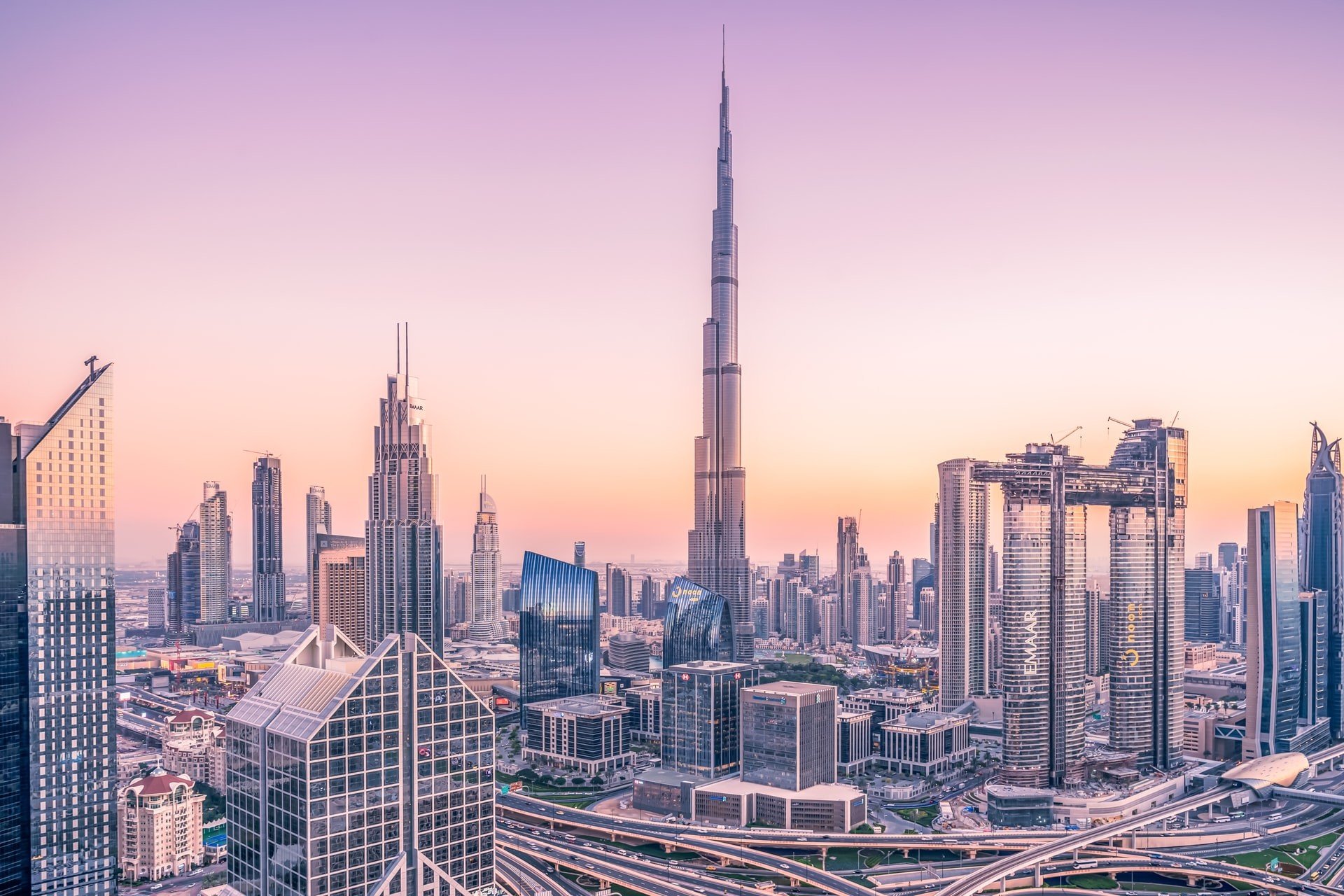 The jewel and most outstanding feature of the Burj is its magnificent spire which has been made using approximately 4,000 tons of steel. The Spire was completed in January 2009 and it was this completion that led to the Burj earning its title of being the world’s tallest building as this marvel can be seen from as far as 95kms away. The interior is inspired by local culture with the perfect hint of modern sleekness and the approximately 26000 glass panels were individually cut by hand and specially designed for the exterior to survive the excruciating desert heat.

One of the highlights of the Burj is the spectacular light shows that catch your eye from almost anywhere in Dubai. The Burj has a number of mini bulbs strategically located throughout the building and on special occasions, the engineers work via a laptop to project the images displayed. The science behind it is actually quite brilliant and it isn’t as taxing as one would assume; where each bulb will have to be perfectly aligned. In fact, the Burj is just one giant protector meaning that whatever is projected on the screen will project onto the Burj. The lights are usually accompanied by the stunning dancing fountains that play every half an hour and which can also be enjoyed on the promenade or from the restaurants lining the Dubai Mall. 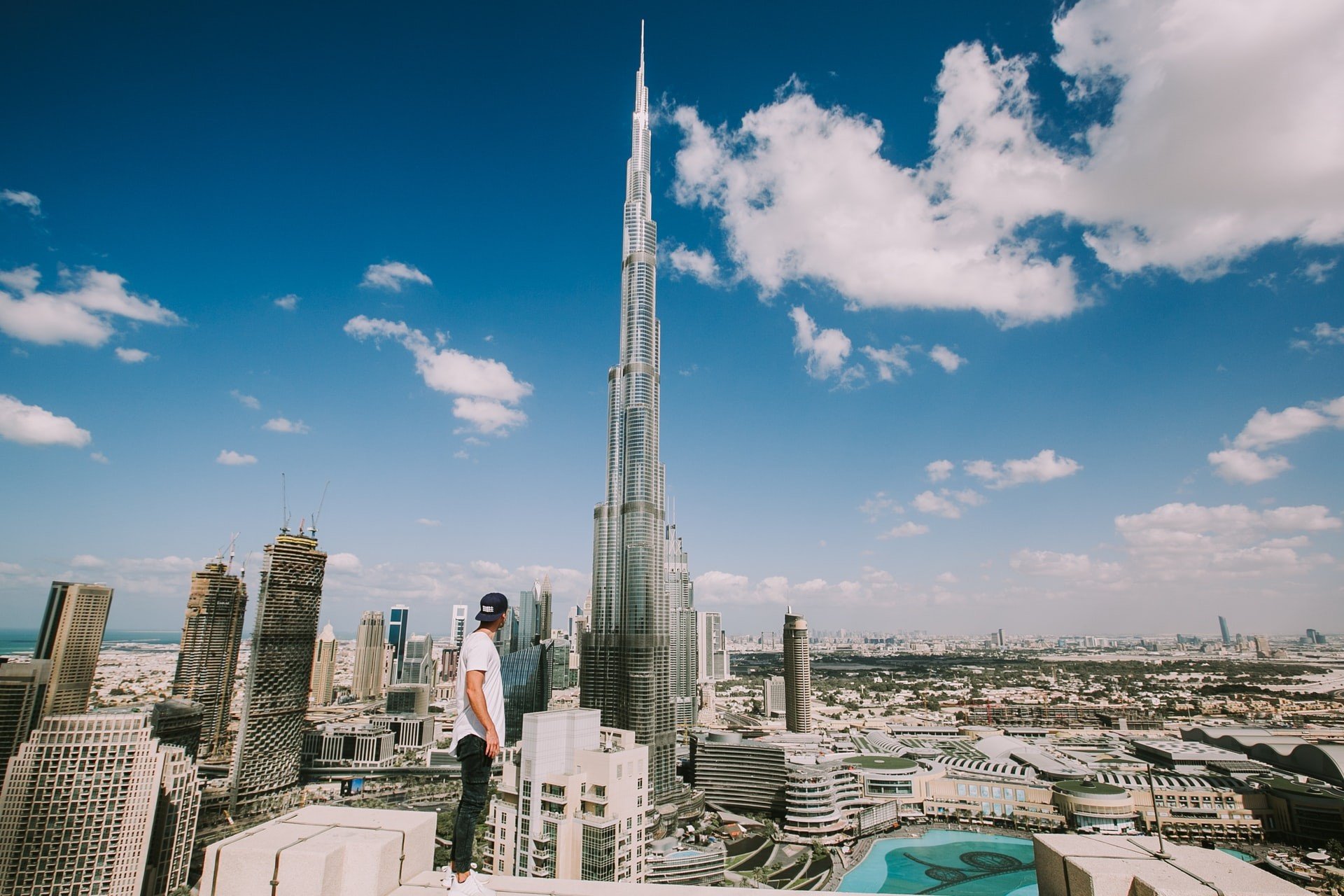 The Burj Khalifa however may not be the tallest building for very long as the Jeddah Tower which was supposed to be completed in 2020 but is quickly gaining ground and will soon force the Burj to take second place. Try to visit this amazing structure as Dubai is now allowing vaccinated travelers; so that at the very least you can get a picture of this amazing landmark in two separate takes as I did due to its size!

Visited the Burj Khalifa before or planning on visiting? Share with us your experience!