Things We Look Forward To During Ramadan in Indonesia

Indonesia, which is one of the largest Muslim countries in the world, has various unique traditions for welcoming the month of Ramadan. Not only that, in filling the days in the holy month of Ramadan, this country which has a Muslim population of 229 million people also has interesting traditions.

Scroll down to know more about Indonesia’s Unique Ramadan Traditions!

1. Sahur On The Road 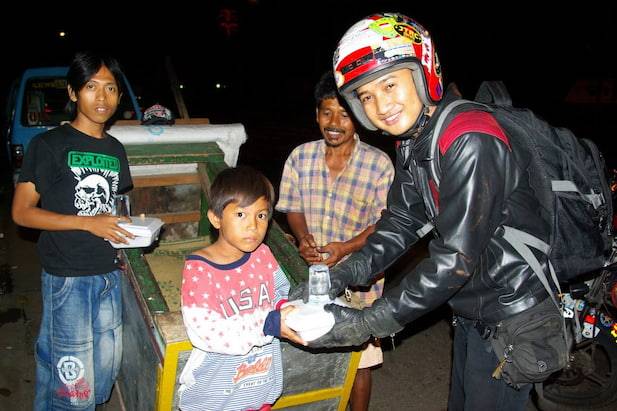 When the month of Ramadan arrives, in Indonesia there is the term Sahur On The Road. A group of people who are members of a community, go around the city by motorbike or car, just before Sahur. They bring food which would later be distributed to everyone they meet on the street. 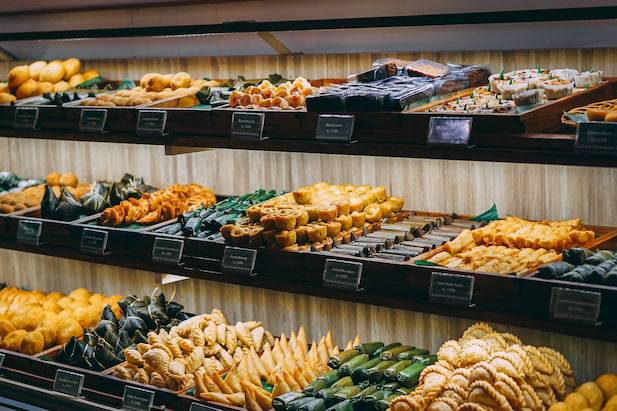 Entering the holy month of Ramadan, don't be surprised if you see a number of people distributing free snacks on the road before breaking the fast. Usually, the food consists of three dates, snacks such as bread or cakes, and a glass of mineral water.

This free snack is intended for people who are fasting but don't have time to break the fast because they are stuck in traffic.

Apart from being on the road, many mosque administrators also now provide free snacks for breaking the fast (takjil). Those who do not have time to buy food to break the fast, or maybe those who stop by the mosque to perform maghrib prayers, can eat these snacks. 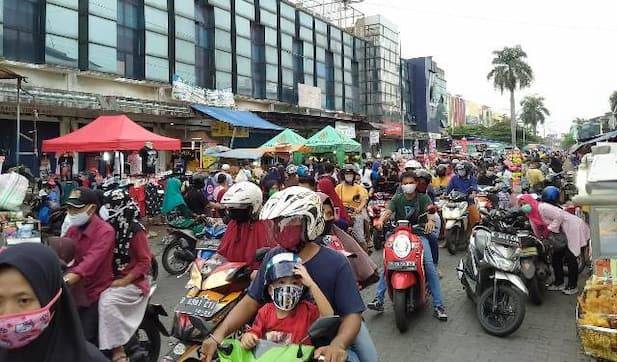 Towards the evening of Ramadan, in Indonesia, there is the term ngabuburit. Ngabuburit itself means doing activities in the afternoon while waiting for the time to break the fast. For teenagers, ngabuburit activities are usually carried out in the city center. By using motorbikes, they go around or gather in a place, joking together.

This Ngabuburit activity can also be filled by hunting for food to break the fast. Usually, during Ramadan, several roads that are considered strategic will be used by food vendors (takjil) to hold their wares.

For these food sellers, the arrival of Ramadan is certainly a blessing. They are always being looked after by buyers. And automatically, their income also increases.

4. Breaking the fast together Breaking the fast together is an activity that seems to be mandatory for some people in Indonesia. The more friends or colleagues, the more Iftar plans they have.

The schedule for breaking together usually starts towards the end of the month of Ramadan. This event is a form of friendship for someone with friends in school, work colleagues, extended family, and many more.

Indonesians carry this out till the end of Ramadan, and on the last day of fasting, the night you have been waiting for arrives. Indonesian people call it Takbiran Night.

On this Takbiran night, all Muslims in Indonesia celebrate by continuously performing Takbir at every mosque until before dawn. But for some other Muslims, there are those who choose to go around the city using various vehicles while beating the drum and doing Takbir.

5. Ramadan traditions in Indonesia that have spanned generations

Various traditions that have existed for hundreds of years are found in almost all regions and are still preserved today. Although the way to do it is different, each of these traditions has the same spirit. 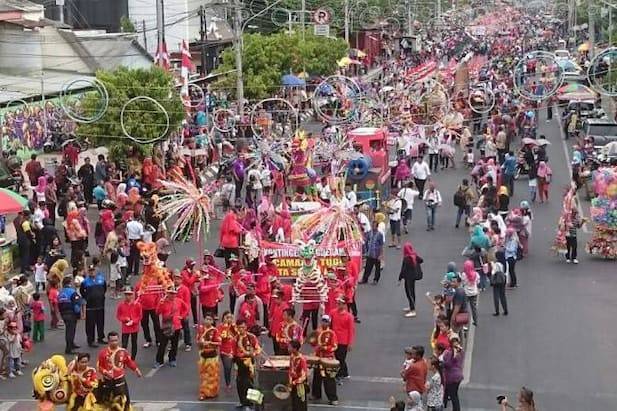 Muslims in Semarang, the capital city of Central Java province, have a Dugderan tradition of welcoming the holy month of Ramadan. This tradition is carried out by beating the drum to determine the rulings for the fall of the 1st of Ramadan. This people's party is held exactly the day before the fast of Ramadan.

In this tradition, dancers dressed in Javanese customs, escorted by troops carrying Warag Ngendog (imaginary mixtures of goats and dragons), walk around the city of Semarang. Usually, this procession ends at the Kauman Mosque, which is the oldest mosque in Semarang.

In every Dugderan tradition occasion, the people of Semarang City can be sure to spill out on the streets. Starting from the top layer to the bottom layer, as well as various ethnic groups.

In Bali, although most of the population is Hindu, Balinese Muslims always hold a Megibung ceremony, every time before the holy month of Ramadan. Megibung is an activity of eating together while discussing some subjects. This tradition is often carried out by the people of Karangasem. The Megibung tradition has been preserved till today.

In the Megibung event, every Muslim community in Karangasem, Bali, sits together in a circle. In the middle of the circle, rice dishes and side dishes are served in a container covered with banana leaves. They also eat it together while chatting. Interestingly, there’s no difference in social status and caste in this event. 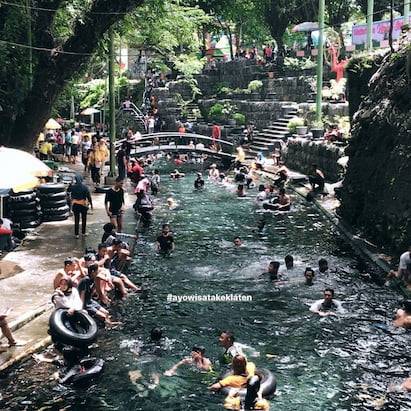 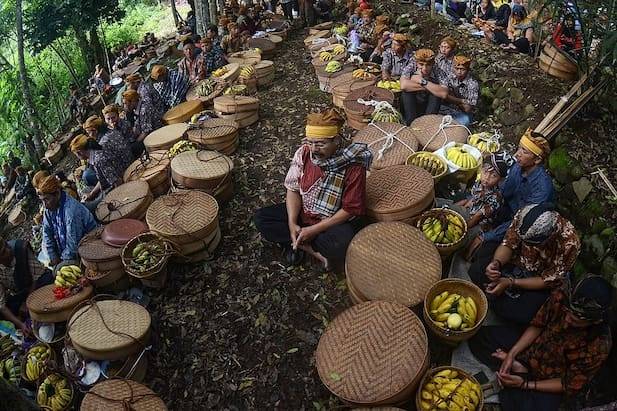 The term Nyadran exists primarily in the Central Java and Yogyakarta regions. One of the typical activities in the Nyadran tradition is visiting the graves of parents or ancestors, making and sharing traditional food, and praying together at the cemetery.

During the time of Nyadran, people come to the grave area together carrying baskets of food and side dishes. Arriving at the grave, the pilgrims then clean the tomb, read the holy verses and pray for their ancestors. After that, they sprinkle flowers on the tomb.

Then comes the long-awaited moment in the Nyadran procession, namely eating/feasting together. People mingle, enjoying the food served on banana leaves. The harmony and warmth of brotherhood is felt every time the Nyadran tradition takes place.

The Nyadran tradition is a result of the acculturation of Javanese culture with Islam. The word Nyadran comes from the word 'Sraddha' which means faith.

Nyadran is an important part of Javanese society. This is because the heirs of this tradition make Nyadran a momentum to honour their ancestors and express gratitude to the Creator. Usually, Nyadran is held one month before entering the holy month of Ramadan. 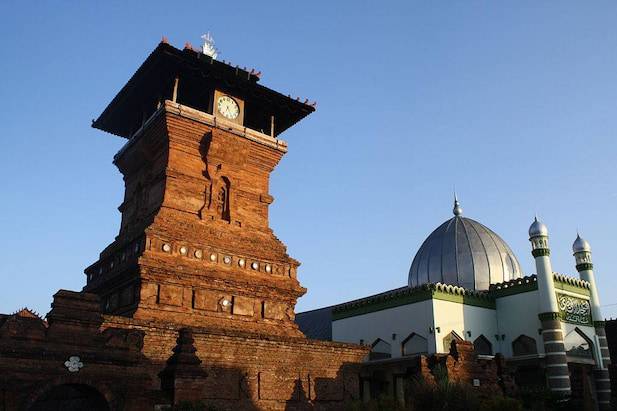 Dandangan is a tradition to welcome Ramadan typically held in Kudus, Central Java. This event usually takes place at the Holy Mosque. The word Dandangan is taken from the sound of the drum which, according to the people around Kudus, reads "Dangdang".

The sound of the drum is considered a marker of the beginning of the month of Ramadan.

Its history begins when Sunan Kudus, a guardian who spread the religion of Islam in Kudus, beat a drum as a sign of the beginning of Ramadan. At that time, his students were busy visiting the mosque to wait for Sunan Kudus' decision about when the month of Ramadan started.

This event is also called Kirab Dandangan. The series of events began by walking around the town square to the district hall for one kilometer. Furthermore, in the district hall, the participants showed attractions, art performances and others. 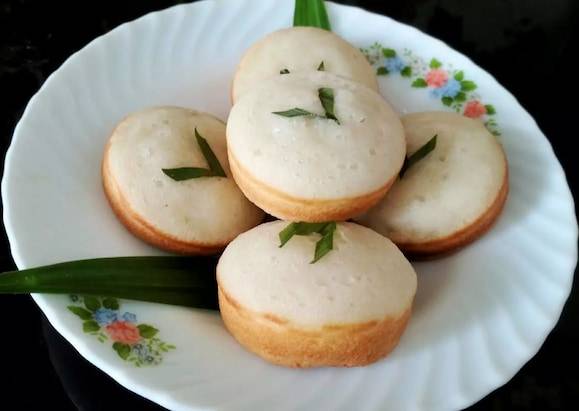 Megengan can mean holding back. In the context of the month of Ramadan, Megengan means holding back the passions associated with eating, drinking, copulation and so on. This Megengan tradition can be a marker for Muslims to make special preparations for the arrival of the holy month of Ramadan.

The Megengan tradition is commonly held by people in the East Java region. In this tradition, there is a food that is never missed, namely the Apem cake. Why does it have to be Apem cake?

Some say that the term "apem" comes from the word Afwan (Arabic) which consists of the letters ‘ain, fa and wau. Usually when standing alone, there are letters alif and lam in front of it, which are read al-afwa, which means sorry.

Extrapolating from this meaning, the Apem cake is symbolized as an apology before entering the Holy Month of Ramadan.

Before Apem's food and cakes are distributed, the congregation of Megengan usually reads tahlil and istighosah first. The hope is that during the fasting month of Ramadan they will be calm and graceful because Allah S.W.T has forgiven the sins they have committed.

Various kinds of traditions to purify oneself in welcoming the coming of the month of Ramadan have been carried out. Those who have practised this tradition are also convinced and ready to enter into battle in the form of restraining all forms of lust. Furthermore, Ramadan arrived.

Various traditions in the holy month of Ramadan have been carried out by Indonesian Muslims from generation to generation. However, at present, it seems that some traditions are no longer possible, given that the world is still suffering from the restrictions of the Covid-19 pandemic.

We hope to enjoy the full force of Ramadan festivities here in Indonesia once the pandemic has eased up, Insha Allah. In the meantime, Happy Ramadan to everyone!