Things We Look Forward To During Ramadan: Morocco Edition

When the crescent moon of the ninth month shines in the night sky, it heralds the coming of a special time, a time of spiritual immersion and devotion: Ramadan. The holy month of Ramadan is a period of self-discipline, compassion, and empathy. From sunrise to sunset during the whole month, Muslims embark on a journey of spiritual awakening and transcendence where they not only refrain from eating and drinking, but also strive to cleanse their souls from sins and impurities, and strengthen bonds between one another, and the Almighty God.

Every place on earth has its own taste, traditions, and rituals of Ramadan. People await its coming impatiently, and regret its leaving woefully. Yet, what remains in their hearts is hope to live to see another Ramadan. In Morocco, you start feeling Ramadan weeks before it arrives, people feel its vibe, give wishes to one another, and start the preparations. Some make new resolutions for the month, some make food, others make more connections with their spiritual worlds. For Moroccans, Ramadan is a period of more sharing and caring for the poor, a period of reconciliation and forgiveness, repentance and righteousness.

From Sunrise to Sunset: The Spiritual Journey of Ramadan 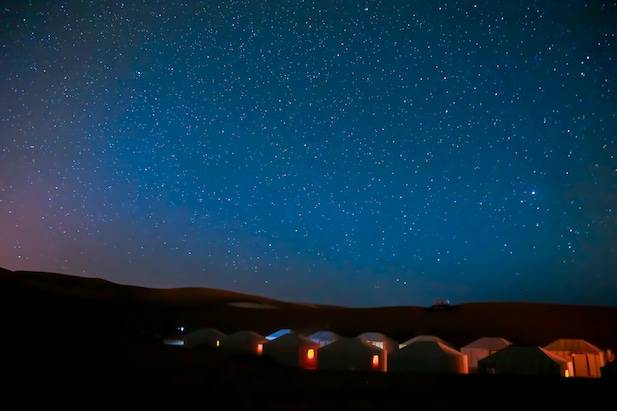 In most Moroccan cities, the time of sahur, the pre-dawn meal, is announced by a loud blast that usually precedes the azan of al-fajr (dawn), followed by another blast to signal the start of fasting. In other cities, horns are sounded to wake people for the suhur and to announce the time of iftar (breaking the fast). At the end of the first day, people would talk about how they felt during the day, how hungry or thirsty they were, and how good they feel about the next day. 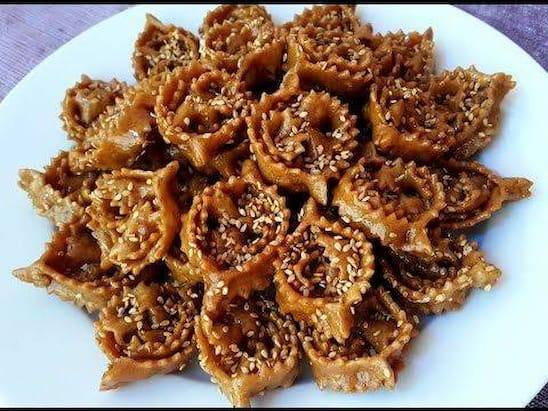 In Morocco, Ramadan announces its arrival with special scents in almost every corner; the scent of the famous Chebakia spreads the word! This flower-shaped, deep-fried, honey-coated pastry is a delicacy of the month of Ramadan. Iftar, or ftour as called in Morocco, is the much anticipated time of breaking the fasting which is at the sunset of each day during Ramadan. As the sun sinks away beyond the horizon, tables in every house are being set and filled with, literally, as much food as possible!

A Moroccan iftar table is usually a big one! For some, it should be a big one! Like most Muslim people in other places of the world, the first thing that Moroccan people like to break their fasting with is dates. People offer each other dates when they happen to be outside at the time of the iftar.

One of the most popular foods during the month of Ramadan is Moroccan harira, a traditional soup made with chickpeas, beans, lentils, and culinary herbs. Although eaten year round, the fragrance of this soup spreads in every house before iftar time during Ramadan.

Outside, iftar is offered to homeless and poor people and travelers. The joy that is shared around a food table in Ramadan is of a special kind.

After the Iftar in Morocco 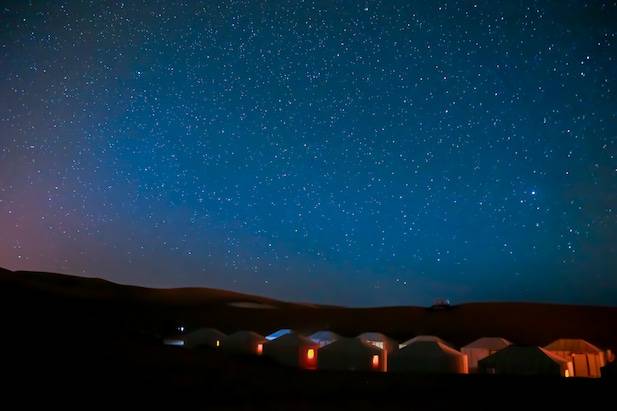 One of the most special times in Ramadan is the time when people head out to the mosques for tarawih prayer after they have had quenched their thirst and filled their bellies. It is an amazing gathering of people who have the same beliefs and who have felt the same hunger and thirst, now sharing in the joy of fulfilling one of Islam’s fundamental pillars.

After the prayer comes a time for relaxation and socialization. People visit their relatives if they are nearby, families go out for walks outside. Some people prefer to sit in cafes to enjoy their missed cup of coffee since the cafes are closed during daytime. It is not surprising that during Ramadan, people stay out until late hours of the night, even children! Some prefer to continue their spiritual activities at night by reciting words of Allah from the Holy Quran, as it is believed to be more rewarding in Ramadan.

The first revelations of the Quran were revealed to the prophet of Muslims, Mohammed, during Ramadan on the night of Al-Qadr, a night “greater than a thousand months”. This night is believed to be one of the five odd-numbered nights during the last ten days of Ramadan, and is commonly thought to be the 27th night.

In Morocco, it is a night of exceptional spiritual and cultural value. The most significant aspect of it is the gathering of people in mosques for an all-night-long prayer, accompanied with breaks for tea and food that are offered for worshippers and less-wealthy people. Many families cook food to be served in mosques for the people who pray. 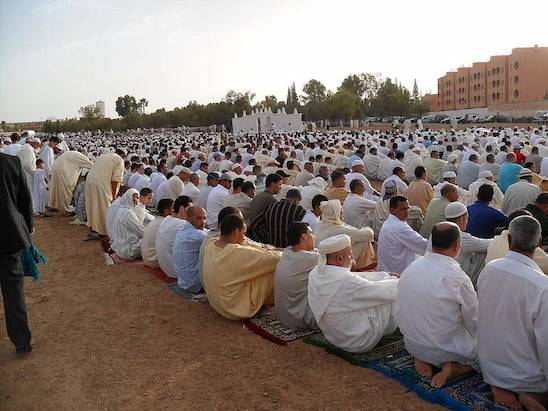 When a new crescent moon is seen in the sky, it means the next day will mark the end of the holy month. However nostalgic they may feel, Muslims all over the globe celebrate this day in most cheerful ways. The first thing people do on this day is a special religious duty: the prayer of the Eid. In Morocco, there are specific places designated for this prayer, they are called musala. They are open-air spaces big enough for a large host of people. There is a special feeling to the sight of men and women driven by enormous joy and unity in spirit walking the long distance to fulfill their faith.

For Moroccans, this day means three things: solidarity, family reunions, and new clothes. Many people take the day as a chance to give zakat (charity) to people in need. Some seek to reconnect with their loved ones or family members they lost contact with. Neighbors visit one another, exchange wishes and plates of sweets and cakes. One of the most common wishes is to wish for the other person to live to see another Eid and many more.

For more about Morocco, its culture and attractions, check out our travel blog!