10 Destinations in Munich To Put in Your Travel List

Islam is a religion whose adherents are rapidly increasing around the world. Because of the growing number of Muslims, major cities around the world have begun to target the Muslim community as tourist destinations.

This resulted in an increase in the availability of various facilities for Muslims. For example, halal food restaurants also serve as places of worship for Muslims, such as prayer rooms or mosques.

This is true in Europe as well. Although Islam is not the majority religion in Europe, many countries and cities, including Munich, Germany, are improving and becoming more welcoming to Muslim tourists.

Munich is Germany's largest city and the capital of the state of Bayern. This city has a population of over 1.3 million people who live and work there.

Many people visit the city with the motto "Weltstadt Mit Herz," which translates as "world city with a heart," because of its beauty.

Munich tourist attractions include natural, culinary, historical, and family vacations that tourists can enjoy in this city.

HalalTrip highlights some of the most popular tourist attractions in Munich that must be seen while on vacation. 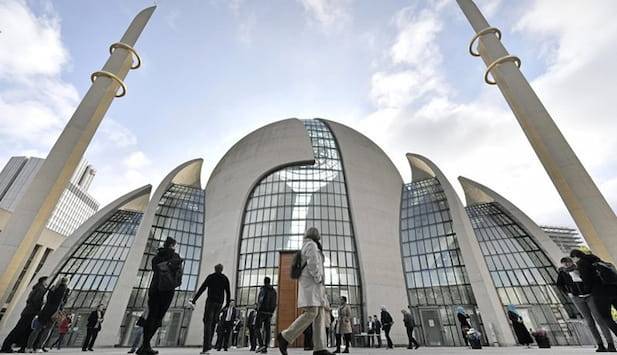 A mosque located near the Allianz Arena stadium, which serves as the home of one of Germany's most prestigious football clubs, Bayern Munich.

In fact, he also contributed funds to the construction of this mosque. Ribery wants the mosque to be able to accommodate Muslim fans and players who wish to pray, particularly on Fridays.

Management provided 85% of the funds for the mosque's construction. Another 15% of the funds came from donations made by Muslim players and supporters.

The stadium complex's mosque is expected to meet the religious needs of Muslim fans. A library and a permanent imam are also available at the mosque.

This mosque has a capacity of 1,200 worshippers. Offices, youth and sports arenas, meeting rooms, a library, and a parking lot with a capacity of 150 cars are also available at the mosque.

The mosque has a unique feel, with a touch of Islam and modernization typical of European-style structures. The building's model is also distinctive when viewed from the outside. The mosque is shaped like a spaceship and has two towers on the left and right sides.

Not only that, but the mosque, which appears brown from the outside and has many glass accents, has some interesting features. One of them is a sophisticated locker designed to store pilgrims' footwear. When modern technology is used to make shoes or sandals safe.

The Freimann Mosque was built from 1967 to 1973 as the seventh mosque in Germany and the first mosque in Bavaria in the Fröttmaning district of Munich's Schwabing-Freimann district.

The Freimann Mosque is more than just a place of worship; it is also a center of Islamic culture, as evidenced by the first Ramadan Festival, which took place on November 20, 1971, at the mosque, which is still under construction.

Libya provided funds in 1973 to complete the construction of a mosque with the assistance of 13 other Islamic countries.

Osman Edip Gürel, architect, and his wife, interior designer Necla Gürel, commissioned the construction of a parabolic shell with a 33-meter-high free-standing tower for the building's shape.

The Penzberg Mosque is located in downtown Penzberg, Weilheim-Schongau district, Bavaria, Germany. A mosque with a contemporary architectural style.

This mosque's concept is modern minimalism, with no mosque dome and an L-shaped plan. Despite the lack of a dome, the mosque has a mosque minaret with a very modern shape.

The mosque minaret stands 13 meters tall and is made of stainless steel in a three-cube arrangement. Natural stone-colored beach sand was used in the construction.

The mosque's main door is made of plain metal rather than carved wood, giving the mosque a futuristic appearance. At night, the large windows of the mosque will be a source of lighting that will display a calligraphy-like pattern. 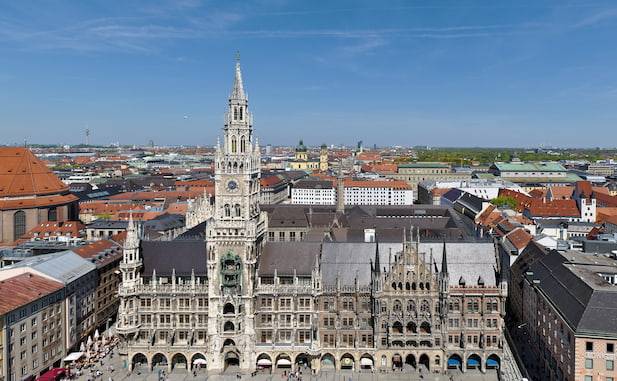 After worshiping and touring several mosques, you can go to Marienplatz, a large and open square in Munich that was built in 1638.

A city landmark, the Neues Rathaus or New Town Hall, was built in 1867 in neo-gothic style in this location.

You'll enjoy seeing the Neues Rathaus and its amazing architecture. You can also climb to the top of the 85-meter-high tower for a panoramic view of Munich.

Relaxing on the Marienplatz while admiring the beauty of the Glockenspiel, a clock with 43 bells and 32 figures, is one of Munich's favorite traditions.

Munich Residenz Museum was once the Bavarian monarchy's palace and is one of Europe's most spectacular palaces.

If you go here, you should see the Antiquarium, which was built in 1579 and is now part of the Residenz Museum.

After that, Alte Residenz, a late Renaissance masterpiece, was built. The other series of buildings was finished in 1848.

The Munich Residenz opened to the public in 1920, with beautiful art and the overall style of the building as a symbol of the Bavarian royal family's power.

The structure was severely damaged during World War II, but after repairs, it is now regarded as one of Europe's best palace museums.

Nymphenburg Palace is a summer palace built to commemorate the birth of Max Emanuel, the long-awaited heir to the Bavarian throne, in 1662. The palace was built in 1664 by Bavarian sovereign Ferdinand Maria and his wife Henriette Adelaide in response to the birth of the crown prince.

The palace is now also the home of the Bavarian aristocracy. The interior houses a diverse collection of art ranging from the Baroque to the Classical eras.

The palace's interior is particularly impressive, with lavish ornaments and decorations that will astound anyone who comes to see it.

The Nymphenburg park spans 200 hectares, making it a very large park that you can enjoy chaining with your family.

The most interesting thing for visitors is that in the summer, you can ride a gondola on the lake, and in the winter, you can go ice skating because the lake freezes. 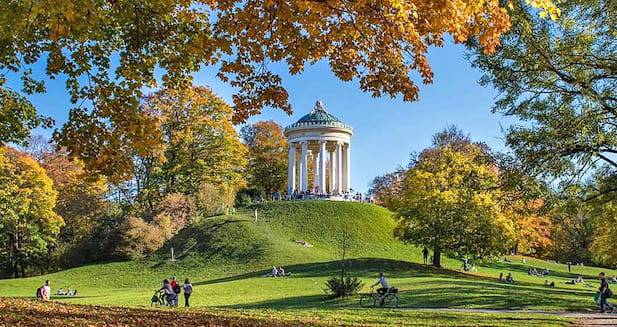 The Englischer Garten is Germany's and Europe's largest urban park. The park, which was founded in 1789, has been expanded over the centuries and now covers 3.75 square kilometers (370 hectares).

The name of the park is derived from a traditional English garden popular in the 18th century. When you visit this park, you will see clusters of naturally lush trees and plants, the 9-kilometer-long Isar river, and the lovely Kleinhesseloher lake.

Visitors typically come for a picnic with their families, jogging, cycling, playing soccer, and even surfing the Eisbachwelle's shores (Eisbach waves). Eisbachwelle is a popular artificial wave among park visitors.

It is a part of the history of the 1972 Munich Olympics. Olympiapark is the new name for the site of the world's sporting events.

The Olympic Park, which is nearly one square kilometer in size, is still used for a variety of events such as concerts, festivals, and other activities.

Olympia Tower, also known as the Olympic Tower, is a 290-meter-high television tower that was built in 1968 and was used in the Olympics. It is now open to the public to enjoy stunning views of the city.

If you're already in Olympiapark, you can go to the BMW Museum, which isn't far away. The BMW Museum is designed in a modern style, with a semi-circular shell that resembles a silvery-white bowl.

In addition to the museum, there is a BMW Welt, which houses various collections of the most recent BMW automobiles and motorcycles. Visitors can also see the technology and future design of this luxury automobile. 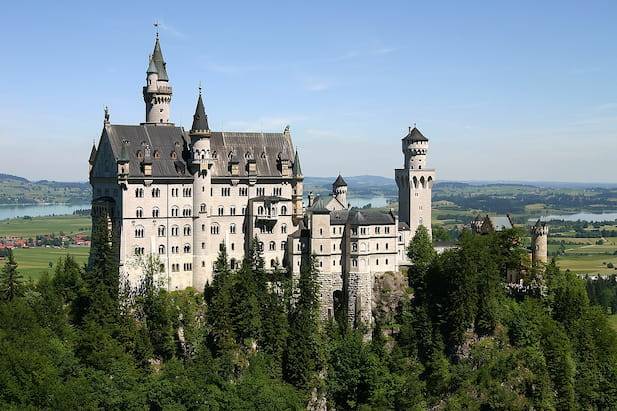 The castle is located on a steep hill in the village of Hohenschwangau, which is located in southwest Bavaria. A castle that is said to have inspired Cinderella's castle and Sleeping Beauty's castle in the Disneyland theme park.

The castle, built by King Ludwig II, was finished in 1886. The King of Bavaria, who reigned from 1864 until his death in 1886, ascended to the throne when he was only 18 years old. He had no political experience and was only interested in the arts.

Neuschwanstein Castle is approximately 120 kilometers from Munich and can be reached in less than two hours by car. Take a day to explore this magnificent palace, which is surrounded by historical structures of high artistic value.

HalalTrip presents some intriguing sights in Munich, Germany that you can visit. The choice is yours!