Ho Chi Minh or Saigon as the locals still call it today is the most popular and largest city in Vietnam. Located in the southern part of the country, Ho Chi Minh was the last city to be recaptured by the Vietnamese during the American war in Vietnam which ended in the year 1975. Ho Chi Minh today is among the fastest growing cities in Asia with tourist flocking in to witness amongst others, the remains of the war besides shopping for inexpensive goods.

Ho Chi Minh is separated by districts with the most popular being District One where you will find most of the tourist attractions there. Entering Ho Chi Minh, unlike the northern Vietnam where you can enjoy the usual four seasons, the weather in Ho Chi Minh is generally hot and humid all year round besides the occasional rainy season.

You would need to wear something comfortable so that you will not be affected by the heat. The Bermudas will be a good choice for men while light clothing is recommended for ladies. Ho Chi Minh City as a whole is unexpectedly clean and this can be seen once you arrive at the airport. Although the technology may not be of the latest one the airport is sufficiently equipped and well maintained. 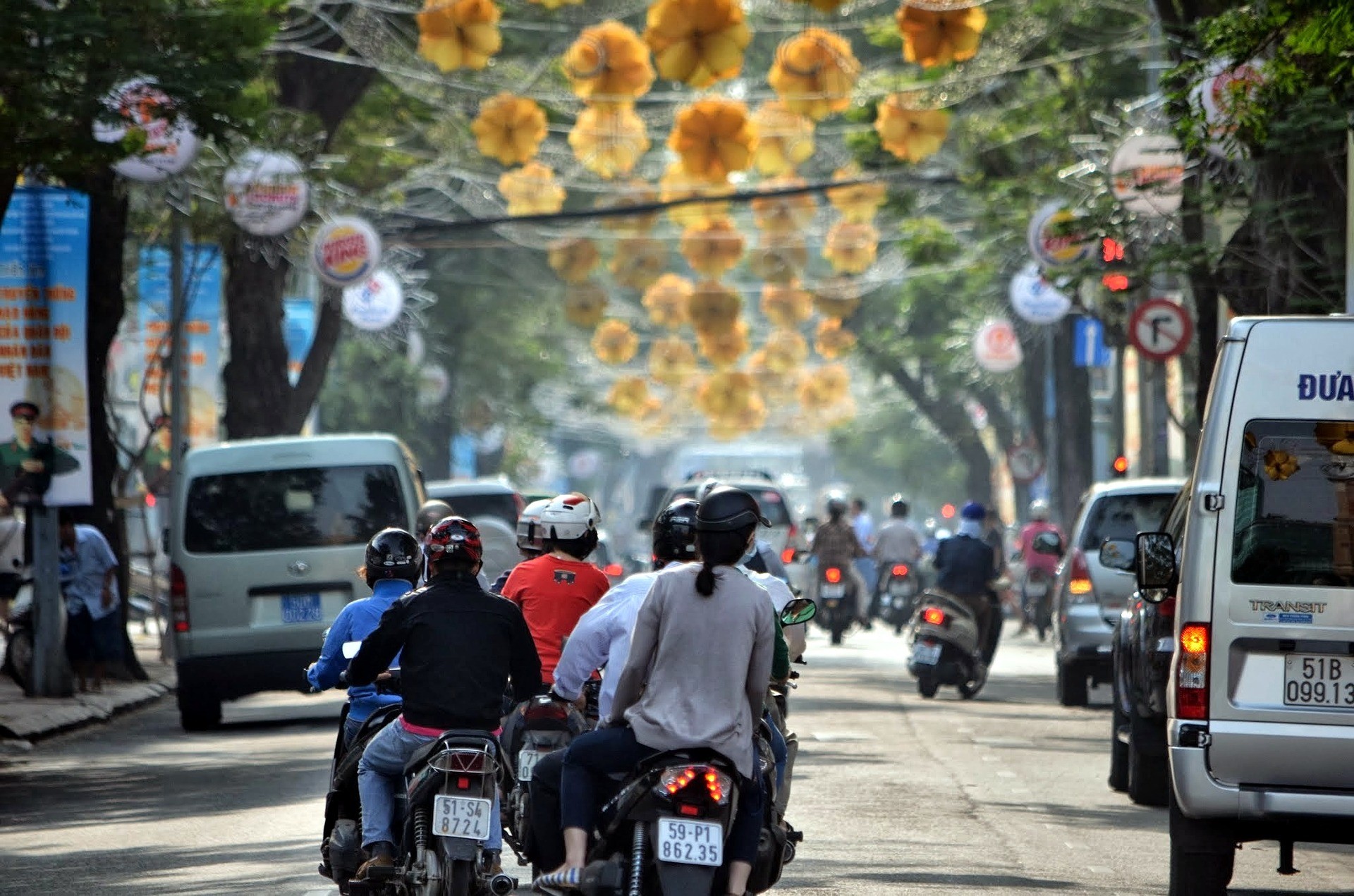 Getting to the city from the Airport

Ho Chi Minh City is also quite safe generally. Nevertheless, do not take things for granted and we have to always remember to respect one’s culture. The local currency is ‘Dong’ although US dollar is widely used. Ho Chi Minh international airport, Tan Son Nhat International is located just around 7 kilometres from District One. You can either take a public bus number 152 or a cab from the airport to get to District One. If you’re taking a taxi, go for the reliable metered cab (usually the big white ones named Vinasun) with metres starting at 10,000 Dong. Alternatively, you can also go on a motorbike especially if you are alone with no large luggage. These motorbikes are available outside the domestic airport nearby but you would need to ask around just to make sure that you are on the right bike.

Ho Chi Minh District One offers a lot of locally owned hotels besides the international five stars hotel like Sheraton, Hyatt, InterContinental and so on. Bookings are generally not required especially if you decide to just stay at the local hotels but to play safe, book it during holiday season such as during Christmas, New Year and so on. I would recommend you to stay at hotels along Le Thanh Thon Street as it is near the shopping belt area especially the Ben Thanh market, the main shopping area with night bazaars where you can get good and cheap stuff.

All over Saigon, you'll see A&EM hotels at different streets of the city. The A&EM hotels are generally low priced and we recommend that you plan your stay at the A&Em Hotel just opposite the Ben Thanh Market. The Ben Thanh Night Market will open along the streets just outside the hotel. While the rooms may be small, it is definitely clean and comfortable for the right amount of people. 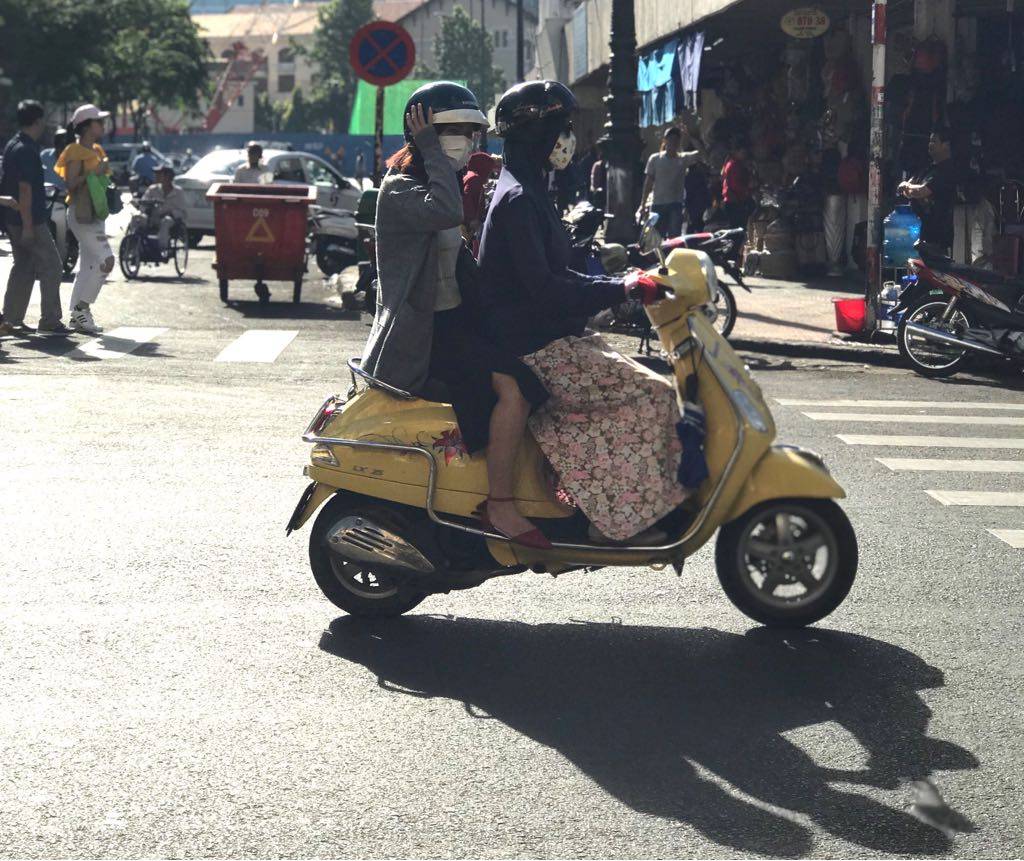 Ho Chi Minh's main transportation system is not fully developed yet. The roads are filled with thousands of motorcycles as the local's usual mode of transportation, which creates traffic jams, especially during peak hours. Busses and other four-wheel drives are fewer as compared to these bikes. In fact, bike rental is more popular than cars here in Ho Chi Minh with rates from USD $15 per day. There are also the traditional ‘Cyclo’ that can bring you around but be very careful with the prices as they may ask you for more money.

Our recommendation is that you move around in foot as District One isn’t that big with all the attractions within a few hundred metres from one another. Alternatively, you may want to take a taxi during off-peak hours to move around in comfort.

There are more than 600 thousand Muslims in the whole of Vietnam made up mainly the Malay Champa communities similar to the ones in Cambodia. Halal food is available at certain locations in District One that serves both local and international cuisine. Dining out, by the way, can be considered more expensive by the locals.

Located just opposite the Indian Jamia Muslim Mosque is among the most popular in District one. The restaurant owner, Dr. Shimi from Malaysia started the business in the year 2009. The restaurant is certified halal by the local authority and serves some really nice local dishes besides Malaysian and western cuisine.

This restaurant is a three-story restaurant is owned by a Chinese Singaporean, Mr. Harry Ang who had been at this location since the year 2000. Level 2 of the restaurant is (local) halal certified that can fit around 200 people. You can choose from more than 150 dishes covering the Malay cuisine, Chinese cuisine, seafood, etc.

It would be a waste if you miss this part of Saigon. The Malaysian Street is a food paradise for Muslim travelers in Saigon because the street is lined up Halal restaurants like Hjh. Basiroh, Kampung Melayu and Haji Osman. We definitely recommend the Restaurant Musa Kariem. If you happen to be from Malay Archipalego, you don't have to worry about adjusting your tastebuds in Vietnam because this restaurant offers both Malaysian and Vietnamese cuisines all under one roof You might even find yourselves going back to the restaurant everyday during your trip just because it is so convenient!

The Malaysian Street is located adjacent to the Ben Thanh Wet Market. Super accessible if you're looking forward to continuing your shopping spree after a feast. Along the Malaysian Street you can also find hotels for your accommodation and travel agencies that hosts Muslim travellers. 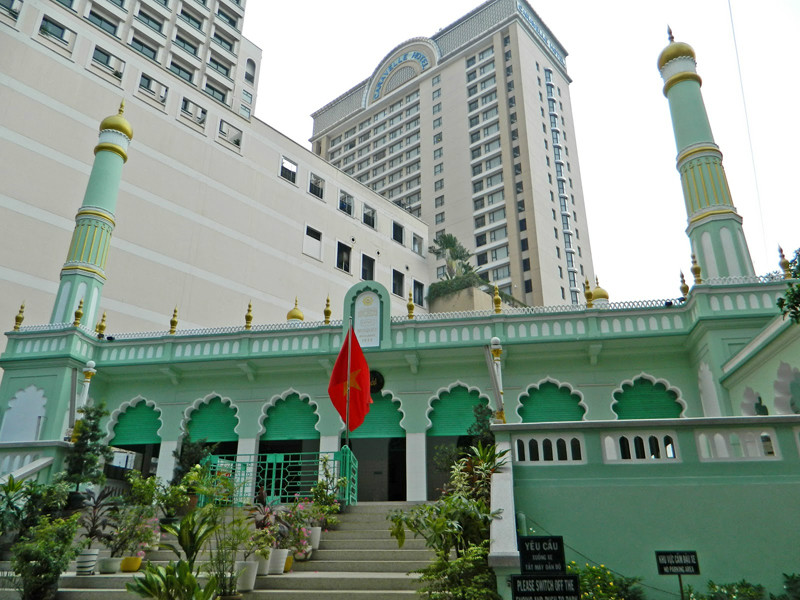 The Indian Jamia Muslim mosque is located at 66 Dong Du Street and is near to the Sheraton hotel. The caretaker for this mosque, Imam Yusoff is a local Malay Champa Muslim and is of 95 years of age. The mosque was built in the year 1935 by the Indian Muslim immigrants who were working there at that time. The Friday sermon is delivered in both the Malay and local Vietnam language.

Attractions not to be missed

45km from Ho Chi Minh. This underground tunnel located at Cu Chi is part of a larger network of underground connecting tunnels and is preserved by the government as a war memorial. This tunnel had been used during the Vietnam – American war where the Viet Cong guerrillas hid whenever a bomb was dropped and to do surprise counterattack once the bombing stop. The 250 km long underground tunnel was built in 1954 and could fit around six thousand people at any one time. The tunnel was used between six to seven hours per day during the war.

The tunnel consists of 3 layers in term of depth. The first being 3 metres deep and the next ones 6 and 10. Due to its size engineered for local usage, the entrance to the tunnel would not fit a tall adult! To visit this very popular tourist attraction, book an inbound day tour from the many travel agent that could be found in district one. 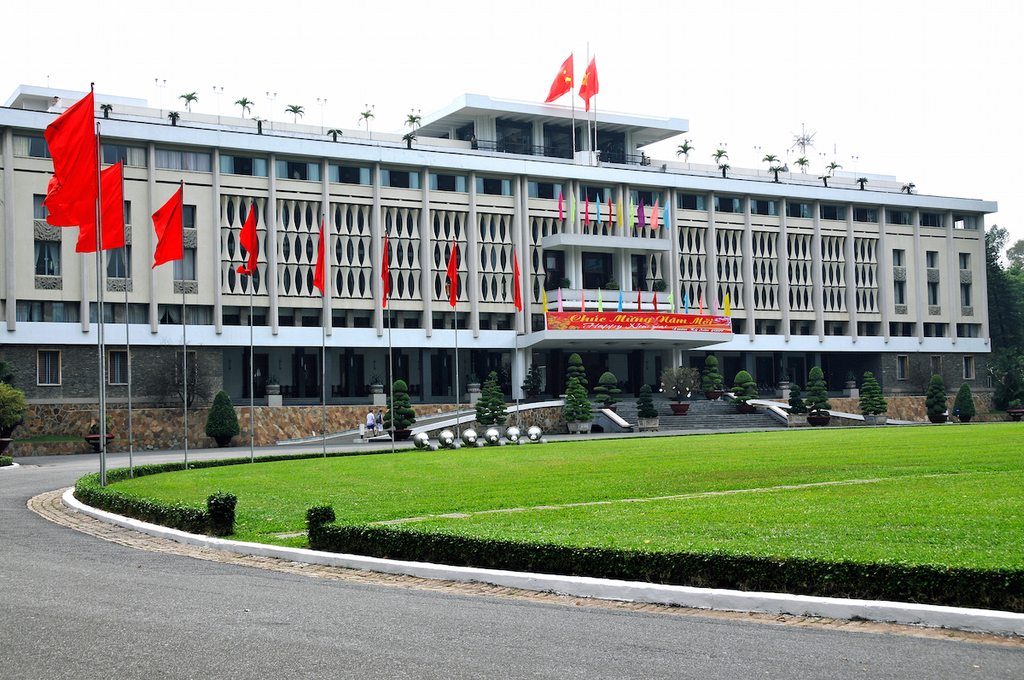 This presidential palace that was built during the French occupancy and renamed after the war ended used to house the President of southern Vietnam that supported the Americans during the war. This is the actual site of where the war between Vietnam and American ended when a tanker from the northern forces crashes into the gates on 30 April 1975. Inside the palace compound, you could find many wars remains such as the strategic unit secret room, the escape route for the President, the official guest receiving area and many more. This palace is open for the public viewing but you need to get a ticket at the entrance to go in. Expect to take some really nice pictures here. This is a place where the local socialize. In the morning, this park is being used for sports activities such as jogging and practicing martial arts. Expect to see hundreds of local citizens moving and dancing. It is part of the local culture. 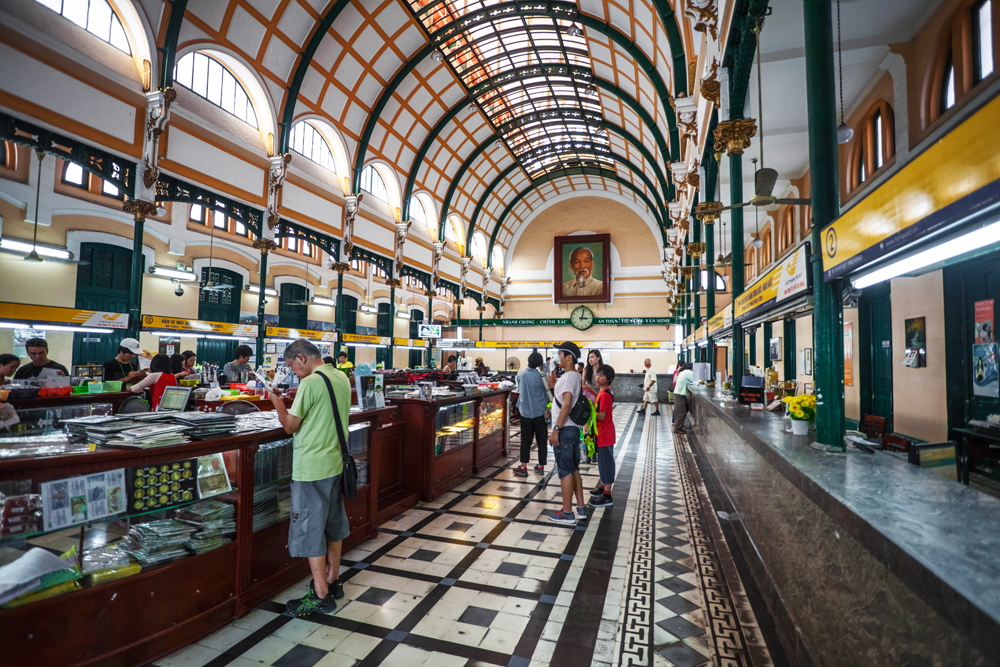 If you love building architecture and design, this is the place to go. Both the Central Post Office and Opera House building is still in operation today and is located nearby each other. You could still buy local stamps at this post office and catch a play at the Opera house. Both buildings were built by the French.

There are plenty of shopping malls available that you could visit which sells both local and international well-known brands. It covers both extremes. You can get a USD$ 5 ‘copy’ Coach bag or the real stuff at its boutique nearby at the usual international rate. Just be careful about this. There are also cases of snatch theft, especially at the night bazaars. Just keep on a lookout. 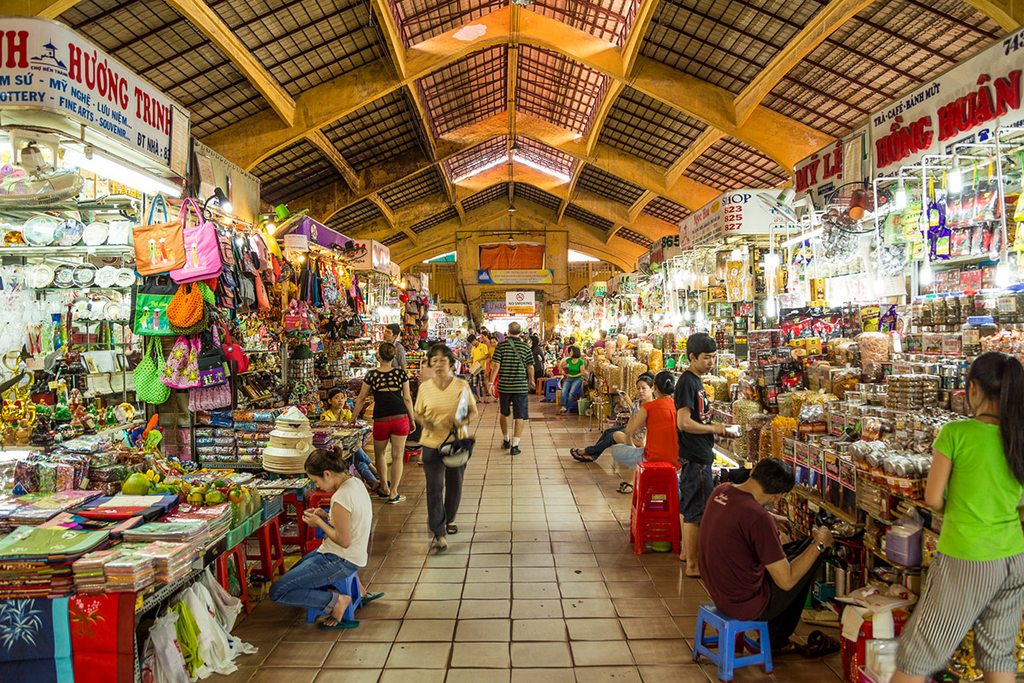 This is the biggest and best place to shop. You could find thousands of items and souvenirs here from the hundreds of local shops available. In the morning, the wet market which is still active extends to the outside part of the market. Slightly later, the other part of the market opens and you could find items such as textiles, scarves, shawls, shirts, shoes, sportswear, children wear and many more available for sale. Ao Dai (pronounced as Aw Yai), a local popular daily costume is also available here. One thing good about buying these dresses is that they can tailor make it for you within 24 hours.

At night, the external part of the market turns into a night bazaar. Stalls’ operating there closes late at night and may even extend till the wee hours. You could really get some good bargains here especially for items such as tee shirt, sportswear, undergarments, bags, local souvenirs and many more. 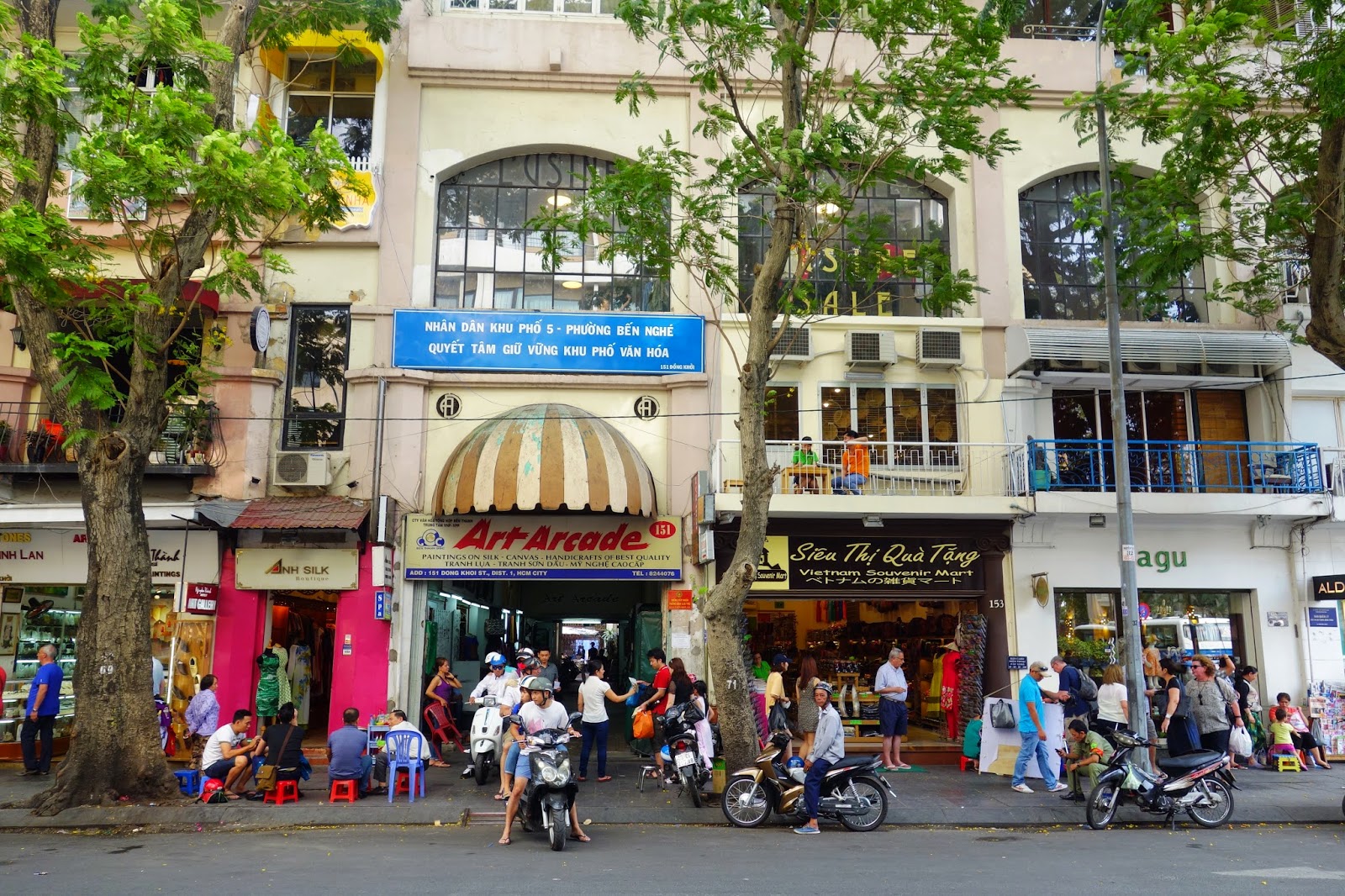 Photo Credit: Where Is Fat Boy

This street is the place for branded goods and well known international brands. Expect to see air conditioned departmental stores big enough just like in any other well-known cities in the world. Also available are the many cafes and eateries catered for the better off locals and expats.

Pack your bags and don't hesitate visit the beautiful city of Saigon!