Find Mosques Near you in Amsterdam 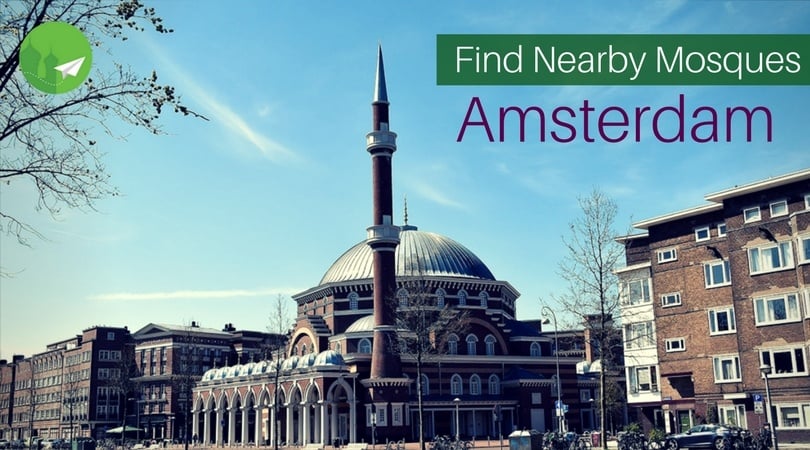 There are so many things that you can engage yourself in if you travel Amsterdam this holiday! But of all the things you can do in Amsterdam, the beauty of city itself is fulfilling enough to bring wonders. Whether it’s a small walk around town, a bike ride in the countryside or even a ferry ride along the dazzling canals of Amsterdam, each of those experiences will fill you with beautiful memories to hold on to.

Even though The Netherlands is not an Islamic country, you will not have any problem as a Muslim traveller to make your trip a halal one. Mosques, prayer locations and halal food outlets are a plenty in the beautiful city, but to make your trip a well-prepared and planned one here is a list of the major mosques and Prayer places in Amsterdam.

Top 10 Things to do in Amsterdam for Muslim Travelers

The Westermoskee, also known as the mosque of West Amsterdam, takes its place of being the largest mosque in the city. The mosque was beautifully constructed by Marc and Neida Britman, both traditional French architects. The mosque was constructed in a span of two years and was officially opened to the public on April 2016, which makes it a relatively new mosque.

The mosque is very spacious with eight hundred square meters and has the ability to accommodate up to 1700 people.

Situated in the bank of the canalized river, the mosque was designed in a way that the water and the brown shades of the mosque gives off a beautiful and picturesque appearance. The mosque is easily accessible by public transport and taxi cabs. Since it is a landmark of the city you won’t have trouble getting there. If you are driving your own vehicle, you will be able to park at the parking area of the mosque or the nearby parking garages - Mercatorplein.

Parking at the mosque premises will cost you €2.40 per hour and €21.60 per day from Monday to Saturday, however on Sunday you will have the privilege of enjoying free parking. If the limited parking slots at the mosque are full you can head over to the two parking garages mentioned above. The Mercatorplein Parking Garage is open from Monday to Saturday from 7.30 am to 11pm.

The Blue Mosque of Amsterdam is very well renowned for its difference in terms of architecture. The name blue mosque comes from the beautiful blue exterior the mosque is adorned in and apart from that, the significance of the building is that it has no traditional minarets, carvings or any form of decorations that gives out the fact that it is a mosque. The blue mosque is simple and comprises of modern architectural elements.

The mosque comprises of two stories and a span of 790 square metres. Apart from the prayer area of the mosque, the blue mosque of Amesterdam contains five class rooms for Islamic Education, a room for lectures and two meeting rooms.

The El Tawheed Mosque of Amsterdam is situated in the old Western part of Amsterdam, Jan Hanzenstraat. The mosque holds the capacity to accommodate 500 muslims for Friday prayers. The mosque was founded in 1986 and apart from religious observances, the mosque is also a location for social work, and a center for Islamic and Arabic education. The mosque educates children in various Islamic aspects such as Quran memorisation, Arabic grammar , Arabic pronunciation and many more. Apart from lessons for children separate classes are held for women at the women’s space of the mosque to enlighten their knowledge.

The mosque also contains a bookstore and is a publisher of Islamic videos and DVDs.

The El Tawheed Mosque is easily accessible by public transport or taxis. If you are driving a vehicle you will be able to park your vehicle at the parking area of the mosque. Please note that parking charges €3.40 per hour from Monday to Fridays from 9AM to 11PM . You will be able to enjoy free parking on Sundays and certain public holidays.

The Faith mosque of Amsterdam, also known as the Fatih Mosque, dates back to the late 1920s, giving the mosque a valuable history. The mosque is situated in Rozengracht, the center of Amsterdam.

The building in which the mosque stands now was previously a church. The building was sold and converted to a musical hall and it was later bought by the Islamic Foundation Fatih of Amsterdam, in the year 1981 and was converted into a mosque. The mosque still contains a very traditional appearance of the 1920s and one of the most striking feature within the mosque is the Arabic calligraphy which reads the name of God in the central mihrab, making this a very special mosque that should be visited by any Muslim traveller on his or her halal trip to Amsterdam. The Moskee Ar-Rahman, also known as the Mosque Foundation Ar-Rahman, is an open mosque in which the doors are open to everyone. The mosque firmly belives in the greatness of openness in its multi-cultural country. Apart from being a prayer location, the mosque also provides Islamic education and comprises of several committees within the mosque to benefit the Islamic society of Amsterdam. Some of the committees include The Education Committee which assists the mosque education activities including Islamic, Arabic and Quran education. The youth committee of the masjid facilitates in spreading Islam among youth with means of seminars and workshops and also helps in facility management of the mosque. The sister committee Al Agawaat promotes sisterhood and education for Muslim women among the mosque community.

This mosque is exceptionally special due to the friendly community that it comprises of.

Other Mosques that you will be able to locate in Amsterdam includes:

Having concerns when it comes to food, accommodation and prayer places is always the deal when it comes to travelling to a non-Islamic country, but you don't have to worry about all that when you are in Amsterdam. Simply keep this list of mosques and prayer locations at hand and you will be able to locate them in Amsterdam with ease. Be sure to visit the magnificent Westermoskee of Amsterdam and the Dutch people will always extend a helping hand if required. In Sha Allah!

So go and pack your bags. Enjoy a beautiful halal holiday when you travel in Amsterdam!

Book a Halal Trip with us!

Check out our Amsterdam City Guide