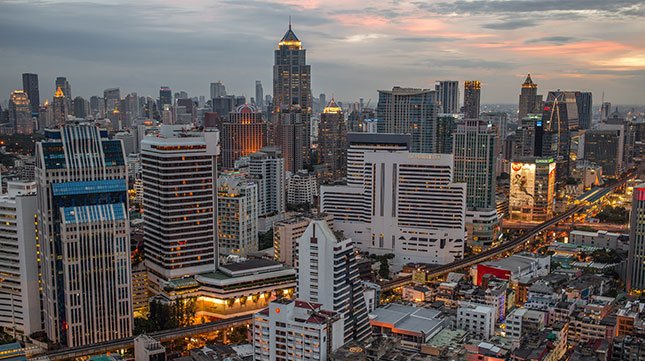 Thailand is a country located in the centre of the Indo-China peninsula in Southeast Asia. A country famous for its pristine beaches, majestic mountains, thick green jungles and the most amazing food, Thailand is every travelers dream holiday destination. Thai food is one of the most popular cuisines in the world and to be able to enjoy authentic Thai food surrounded by the unique sights and sounds of Thailand, is truly a fantastic experience. Thailand is home to a wealth of cultural attractions and is a predominantly Buddhist country. However, there is a prominent presence of Muslims scattered around the country, and with the influx of Muslim tourists, the demand for Halal food is on the rise. Many restaurants around Thailand cater to the Muslim travelers needs.

Thai food is world-renowned for its fusion of spicy, sweet, sour and salty flavour combinations. The cuisine differs according to regions; Southern Thai food tends to include more coconut milk and turmeric, while the Northeastern dishes tend to include more tangy lime juice. Rice is a key part of Thai cuisine and curries served with it are significantly Thai, infused with local ingredients such as galangal, Thai basil and lemon grass. The availability of Halal restaurants depends on the different cities. Bangkok is the bustling capital of Thailand and is known as the Venice of the East. Home to many cultural sites, museums, royal palaces and temples; Bangkok is visited by almost all tourists traveling to Thailand. Experiencing the country through its food as well as its sights is what every traveler seeks.

Muslims tourists need not worry, as Bangkok has several Halal restaurants as well as many street-side carts that sell various kinds of Halal food. A few of the restaurants that serve Halal Thai food are; Jan Siew Al Hilal Restaurant, Usman Thai Restaurant, E-San Fung Thon and Spice and Rice Thai Restaurant. The country also has other dining options, such as, Nasir Al-Masri; which serves Middle Eastern cuisine, Wrap it; which serves Turkish food and Swat Star, serving Pakistani cuisine. Bangkok is famous for its street food, with street vendors in food carts selling a variety of mouthwatering local favourites and delicacies. Pad Thai, som tam, mango sticky rice, fried bananas, fried chicken, different types of noodle dishes and even fried insects can be found in these food carts. Muslims need to be cautious when eating anything from these street vendors as most of them are not Halal.

Phuket is one of the most popular destinations in Asia and is the largest island of Thailand. It is known for its stunning beaches, beautiful scenery and great weather. With a Muslim population of thirty percent, living on the island, Halal food is quite easy to find. Ghadafi Halal Food, Ban Sang Duan, Sami Kitchen and San Sabia are some of the restaurants serving Halal Thai, food while Cairo Restaurant serves Egyptian cuisine and Dubai Shisha Restaurant serves Indian food. Unfortunately not all tourist beaches in Phuket have Halal food, so it would be wise to check before traveling to these areas or to pack some food to take along. Chiang Mai is the cultural city of the country, surrounded by mountains and lush greenery. It is home to a small population of Muslims. Therefore, Muslim travelers can find a limited number of restaurants in the area.

The Anusan Market and Hidayatul Islam Baan Haw Masjid, both have a few Halal eateries located nearby. A variety of Thai, Arab, Indian and Chinese cuisines can be found here. Some local specialities served in this region include chicken khao soi, khao mok phae and khao mok kai. Not only will Muslim travelers be able to find Halal food, but they’ll also be able to locate mosques and other Muslim-friendly facilities in most of the major cities in Thailand. It is a great destination that has something for everyone and is a definite must-visit.