A Guide to Crystal Mosque, Malaysia

Most Mosques are architectural monuments that garner spectators from all corners of the world who appreciate the design and holiness of these religious buildings. One such Mosque is the Crystal Mosque (Masjid Kristal) in Terengganu, Malaysia, known the world over for its unique architecture. It was in Terengganu that Islam first arrived in Malaysia, as documented in a 1303 C.E. stone inscription, making it the apt location for the magnificent Masjid Kristal. It is a coastal state with a scattering of islands close to it. 95% of the state’s population is made up of Malays.

The Mosque, which cost 80 Million dollars, is a colossal structure of glass and steel that was constructed between the years 2006 and 2008. The official opening was held on the 8th of February 2008 by the present-day Sultan, Sultan Mizan Zainal Abidin of Terengganu. Regarded as one of the world’s most beautiful Mosques, it is located within the Islamic Heritage Park in Terengganu, situated on a man-made island known as Pulau Wan Man. The religious theme park also houses replicas of other world-famous Islamic structures such as the Taj Mahal and the Citadel of Aleppo. The Mosque can accommodate 1500 worshippers and uses solar panel cells to power its facilities. The technologically advanced Mosque boasts a built-in IT infrastructure and is connected with wireless internet for visitors to read the Quran electronically. 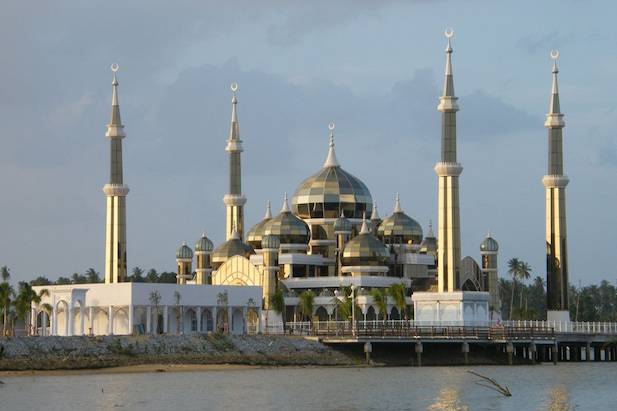 The Mosque overlooks the waterfront, and the sparkling water reflects off the glass, adding a kind of mesmerizing charm to the building. The mosque is illuminated from the inside, giving its glass domes the crystal-like effect it is named for. The design followed in building the Mosque takes influence from Moorish and Gothic architectural elements, and the glass and steel add a sleek, modern look to the magnificent building. At night the Mosque acts as the stage for a colorful display of lights, lighting up the minarets and domes in pink, green, yellow, and blue. 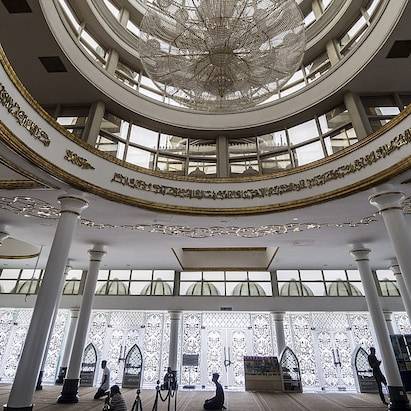 The Mosque provides guided tours, robes, and prayer mats. Upon entering the main hall, you will be greeted by a grand crystal chandelier hanging from the ceiling, with beautifully etched calligraphy and soft carpeting covering the floors of the Mosque. The tour is very informative and will take you through the whole Mosque, providing you with interior and exterior views. A souvenir shop, as well as a small restaurant, are available nearby, so you can get something to remind you of your experience and grab a bite to eat while enjoying the view from the restaurant overlooking the jetty and cruise boats.

The admission charges for the park cover the visiting charges of the Mosque. The basic admission charge is RM21.20 per adult; an additional discount of RM10 is given for MyKad holders, Malaysia’s national identity card. Senior citizens and children between the ages of 7 to 12 years are charged RM15.90. Children below the age of 7 have free admittance when accompanied by an adult.

Ticket packages are available as well, tailored for students, families and group bookings. Some of the packages include meal options as well as river cruise tickets. More information on these can be obtained through the Islamic Heritage Park website.

How to get to the Crystal Mosque 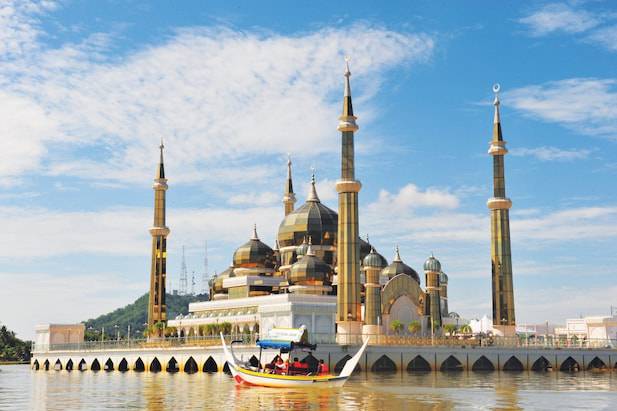 There are two travel options to get to the Mosque, you can arrive in Kuala Terengganu by taking a flight to the Sultan Mahmud Airport, or even take a bus from anywhere in Malaysia or Singapore. If you are feeling a little adventurous you can opt for the water taxi locally known as a bot penambang (boat-for-hire), which provides stunning views of the surroundings and the main attraction, the Crystal Mosque.

Check out our Malaysia city guides

Find a Halal Restaurant near you in Terengganu

Find a Mosque near you in Terengganu

Book a Halal Hotel in Malaysia