As an Islamic–Mediterranean–North African country, Tunisia shares many similarities with its nearby nations. From sandy beaches to the Sahara Dunes, the nature of Tunisia encapsulates all that is unique about North African landscapes. But that’s not all that Tunisia has to offer. With its remarkable history of various civilizations, Tunisia is home to a rich culture and many impressive ancient monuments.

Being a Muslim country, finding halal food and mosques is never an issue all over Tunisia. To help you locate the best eateries and most sophisticated mosques, I highly recommend checking out the Halal Trip (Android & Apple) App for more details and extra interesting features for Muslim travelers.

Now, let’s get on with our list of the 6 things to do in Tunisia as a Muslim traveler.

1. Be Enchanted by the Spirituality of the Holy City of Kairouan

A devout Muslim needs no other reason to visit Tunisia than the cheer holiness of its city Kairouan. Established during the Golden Age of Islam by the Ummayad Caliphate, Kairouan is next only to Mecca, Medina, and Jerusalem in attracting Muslim intellectuals and seekers of spiritual enlightenment.

Be spiritually delighted in the holy mosques of Kairouan, and be enchanted by Islamic World Heritage in your visit to Tunisia.

2. & Lose Yourself in the Ancient Carthaginian and Roman landmarks

Before Islam set foot in Tunisia, this geographical spot at the northern edge of Africa was home to some ancient civilizations, namely Phoenicians, Carthaginians, and Romans. Historical monuments throughout Tunisia stood the test of time across the millennia, and stand as a testament to the richness of the Mediterranean nations.

The city of Carthage was founded by Phoenicians in the 9th century BC. There are relics of ancient civilizations scattered all over this huge museum city.

One of the most impressive landmarks in Tunisia is the El Djem Amphitheatre. As one of the largest amphitheaters in the world, El Djem stands out as a giant piece of visual art. The latter artistic quality is what attracted movie makers like the director of Gladiator to film some of their works there.

3. Relax in the Fantastic Mediterranean Beaches 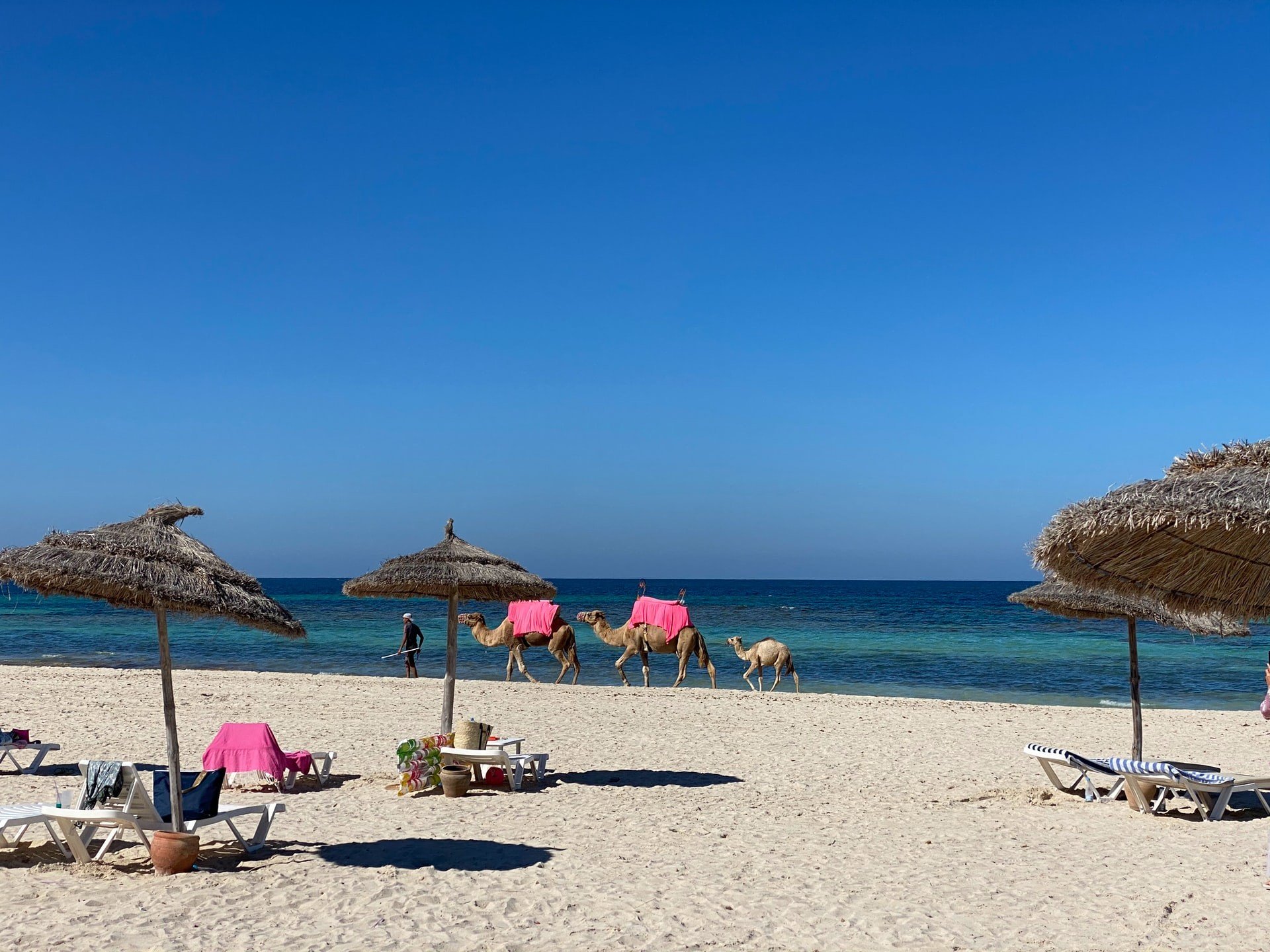 The beaches of Tunisia are sufficient for anyone to take a trip there as soon as possible. Everyone deserves to have some quality time sunbathing on the beaches of a Mediterranean beach. Moments like those are what give life an upbeat turn.

As a Muslim nation, the beaches of Tunisia are less provocative to moderate Muslims than other countries.

4. Visit the Golden Dunes of the Sahara (Star Wars Fans Will Love This One) It would be a shame to visit North Africa without heading south to its heart, the Sahara Desert. Maghreb countries have many things in common, the Sahara being the most notable geographical aspect they share. In Tunisia, the Sahara is a magical place, similar to what you hear in old Arabic stories.

The infinite sees of dunes, the luscious oases, the tricky mirage, and the camel caravans are all things you have to experience in Tunisia.

But wait, there’s more! If Tunisia’s desert may look like something from another planet from a galaxy far away. That’s because four of the Star Wars movies have shot their scenes in the Tunisian Desert. Star Wars fans will recognize the Tatooine landscape and Luke's house in Star Wars: A New Hope. They can re-live some of the moments of Luke Skywalker’s childhood in the Tunisian Desert. 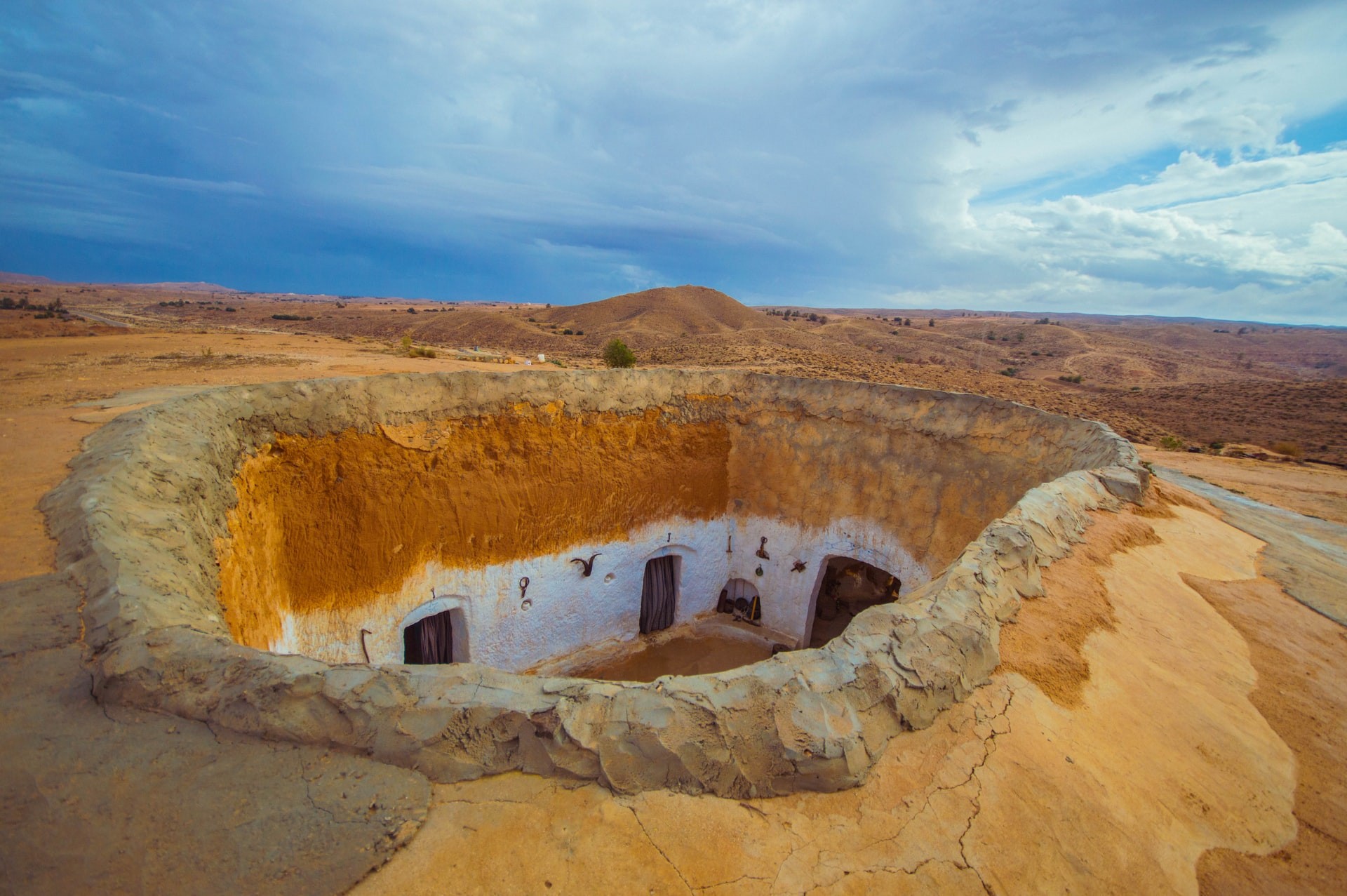 5. Taste the Mouthwatering Flavors of the Diverse Tunisian Cuisine 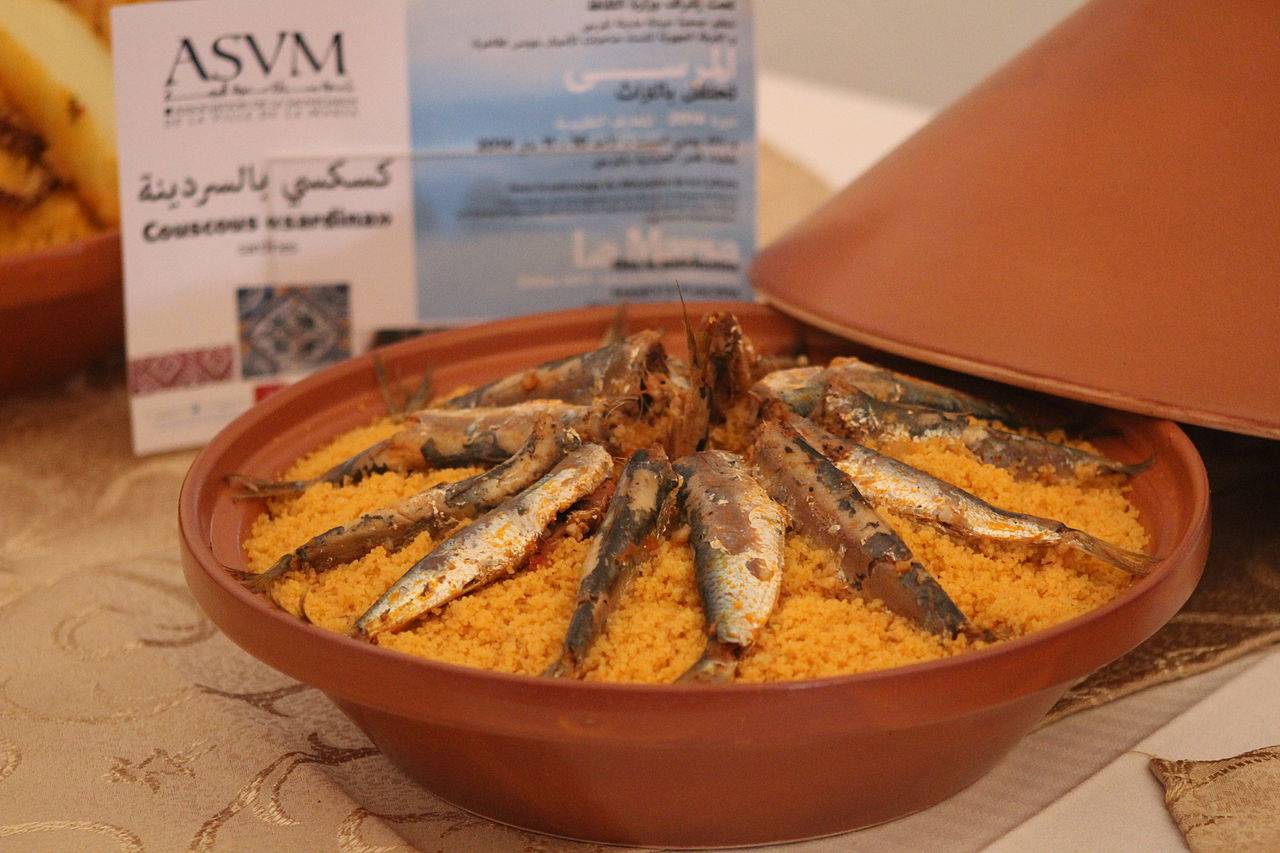 Tunisia has a wide range of delicious traditional meals. The interesting thing about Tunisian cuisine is the fusion of French heritage cuisine and its Italian counterpart with the traditional herbs and spices.

Couscous is, probably, the most popular and widely valued traditional dish in North Africa; Maghreb countries all share the love of that meal. In Tunisia, you have to try their Couscous. You can probably compare it with its Algerian and Moroccan counterparts.

Another meal you need to try in Tunisia is the tasty Brik, which is a pastry stuffed with tuna, eggs, cheese, and parsley. Seafood is also a must-have; Tunisians have all sorts of unique ways to prepare fish. And don’t forget to get some kebab sandwiches.

As for drinks, tea with pine nuts is the Tunisian standard.

6. Wander Through The Labyrinthine Medinas of Tunisia 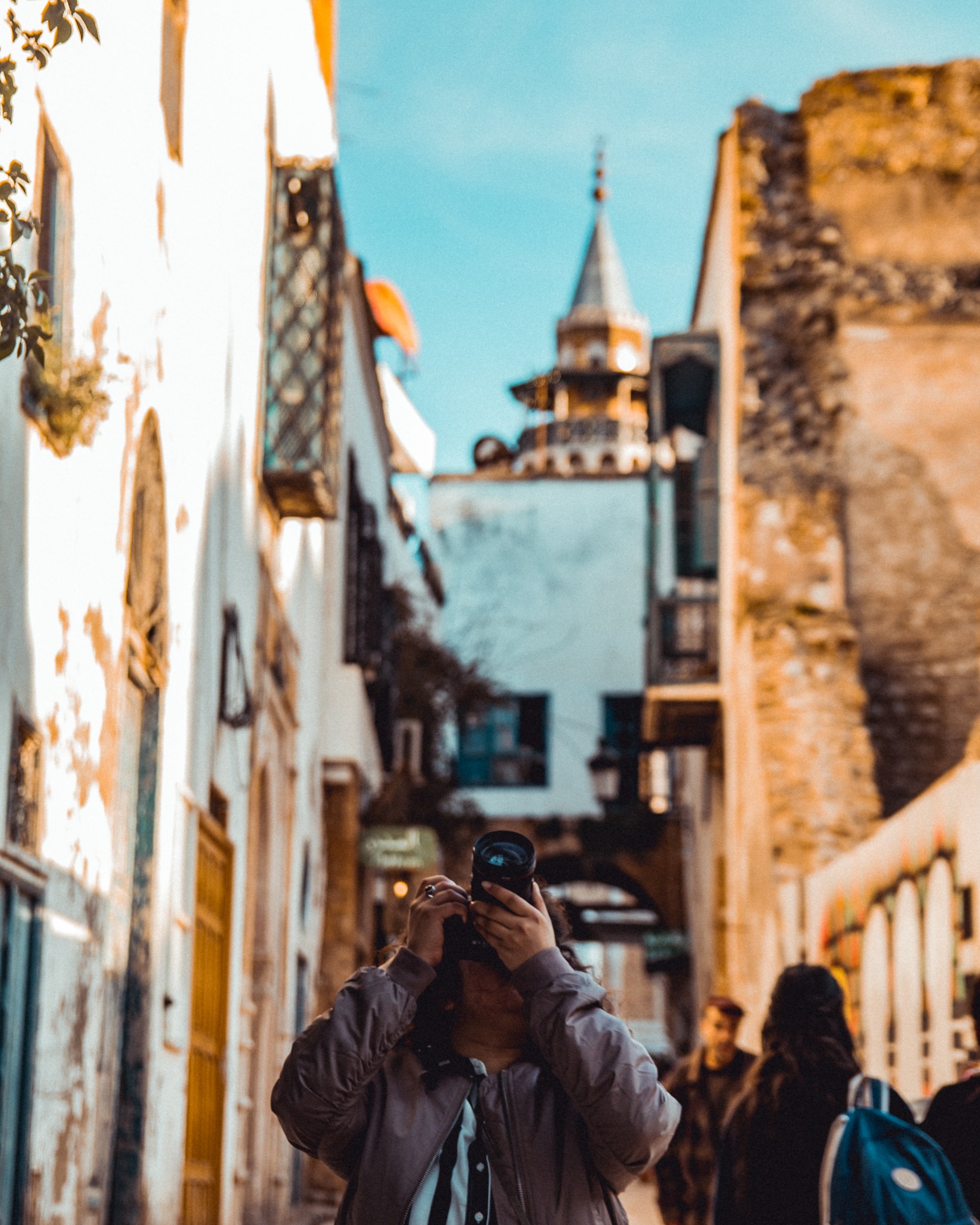 This list of things to do in Tunisia would be incomplete without mentioning the colorful/exotic medinas of Tunisia. The medinas are the ancient parts of the cities that return to medieval times. Wandering through the maze-like streets of the medinas and losing track of where you are is part of the fun of shopping there. You’ll find thousands of artifacts, exotic clothes, and souvenirs that you can choose from. Don't forget to get an exotic souvenir for each of your loved ones. The prices in Tunisia are fairly reasonable, and you can always bargain for a low price. 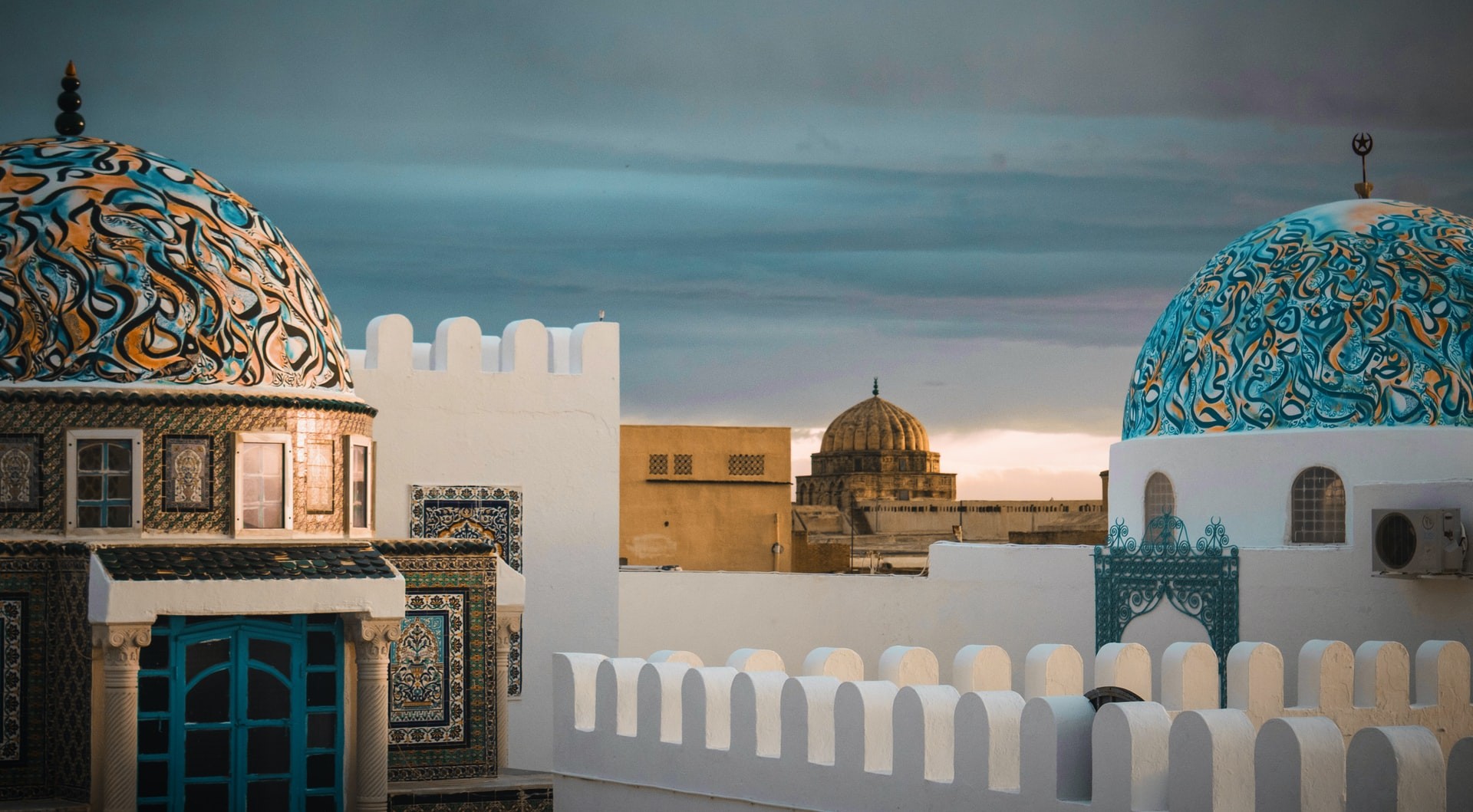 Climb up to a high roof and see how the medina is structured. You’ll find that the center nodes that tie it together are the mosques. Mosques are built first, then other facilities and homes surround it; that’s how medinas all over the Muslim world are structured. And while you’re still on top of that high spot wait for the sunset to witness some impressive visuals.