This Is So #Kawaii! Hop On The Hello Kitty Shinkansen When You're In Japan!

What is a Shinkansen? Shinkansen is the name given to a network of high-powered trains in Japan, generally used for long-distance travel from Tokyo to distant cities, but also by daily commuters. To English-speakers, a Shinkansen might be better recognizable when called a bullet train.​ 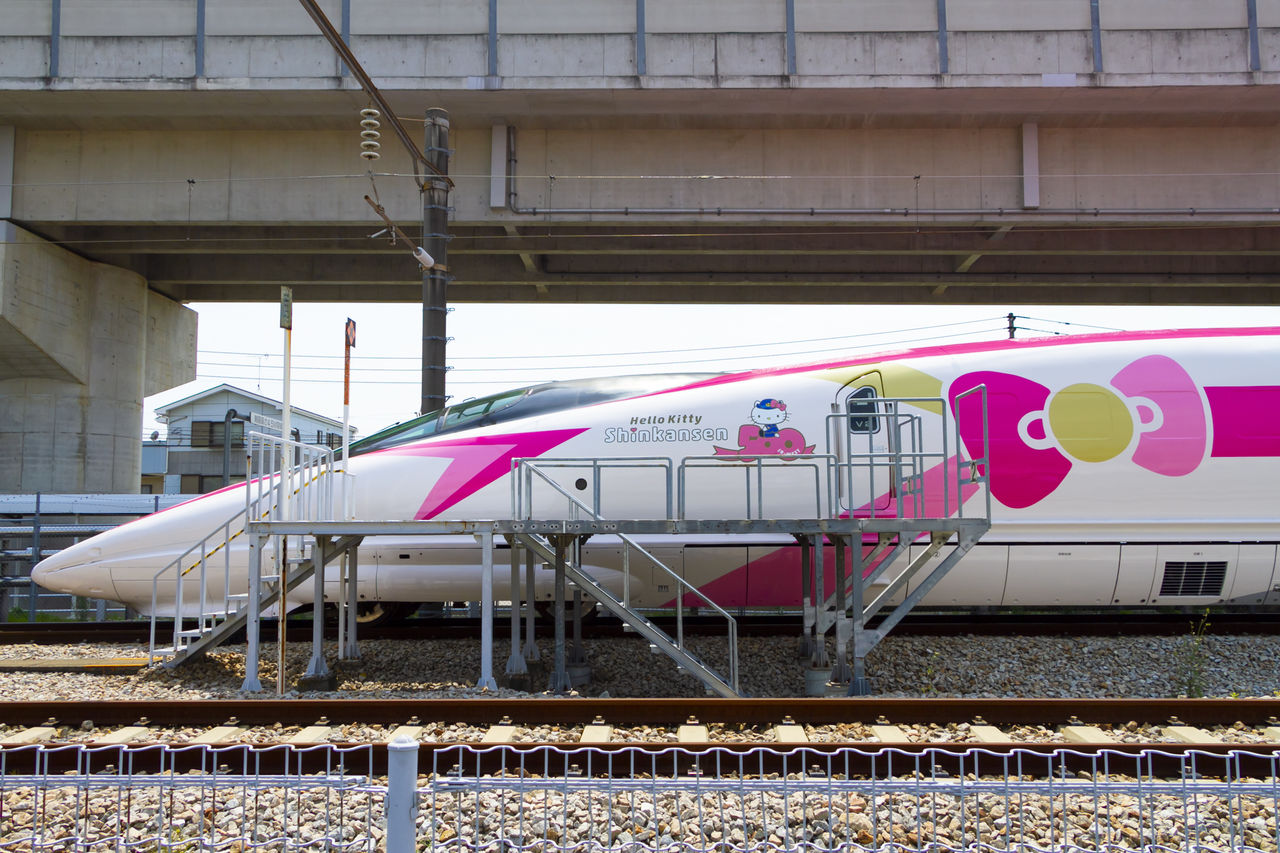 Japan's latest spectacle combines two things the country loves and is best known for all around the world – Hello Kitty (a cute character created by the company, Sanrio), and bullet trains. The train is operated by one of five Japan's railway operators – West Japan Railway Co and is set to run the Shinkansen line from Shin-Osaka to Hakata Station as a Kodama. The train's main aim is to promote tourism and to bring attention to the regional communities in Western Japan.

The company unveiled its newest and cutest additions in June of this year, two revamped 500 series trains decked out fully in pink and white, complete with Hello Kitty motifs and the character's signature pink bow to be seen everywhere.

The pink and white bullet train began its run on the 30th of June. The train is said to be in operation only until October 2018, although plans to increase the time period may be taken up depending on the demand. But, why take the chance? If you are traveling to Japan during this time period, do not miss a trip on Japan's cutest high-speed bullet train, it's sure to be a memory of a lifetime!

Features of the Hello Kitty Shinkansen 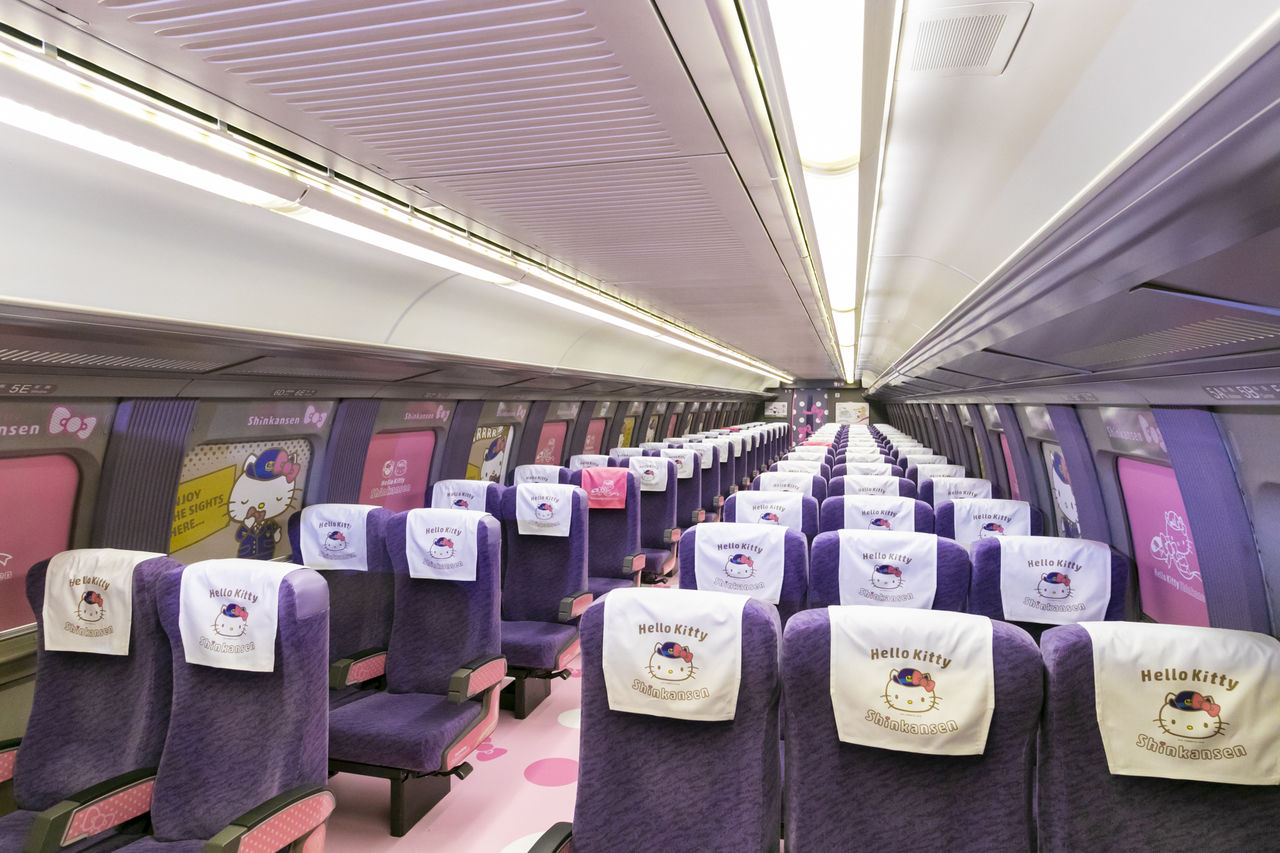 The outside of the train is painted in shades of pink and white, with large pink ribbons, and the image of Hello Kitty decked out in the Shinkansen uniform looking out from each train car. The inside is more of the same, with little motifs of Hello Kitty placed in several parts of the car, including the window shades. The train even plays the Hello Kitty jingle as it approaches each stop instead of the usual Shinkansen tune. 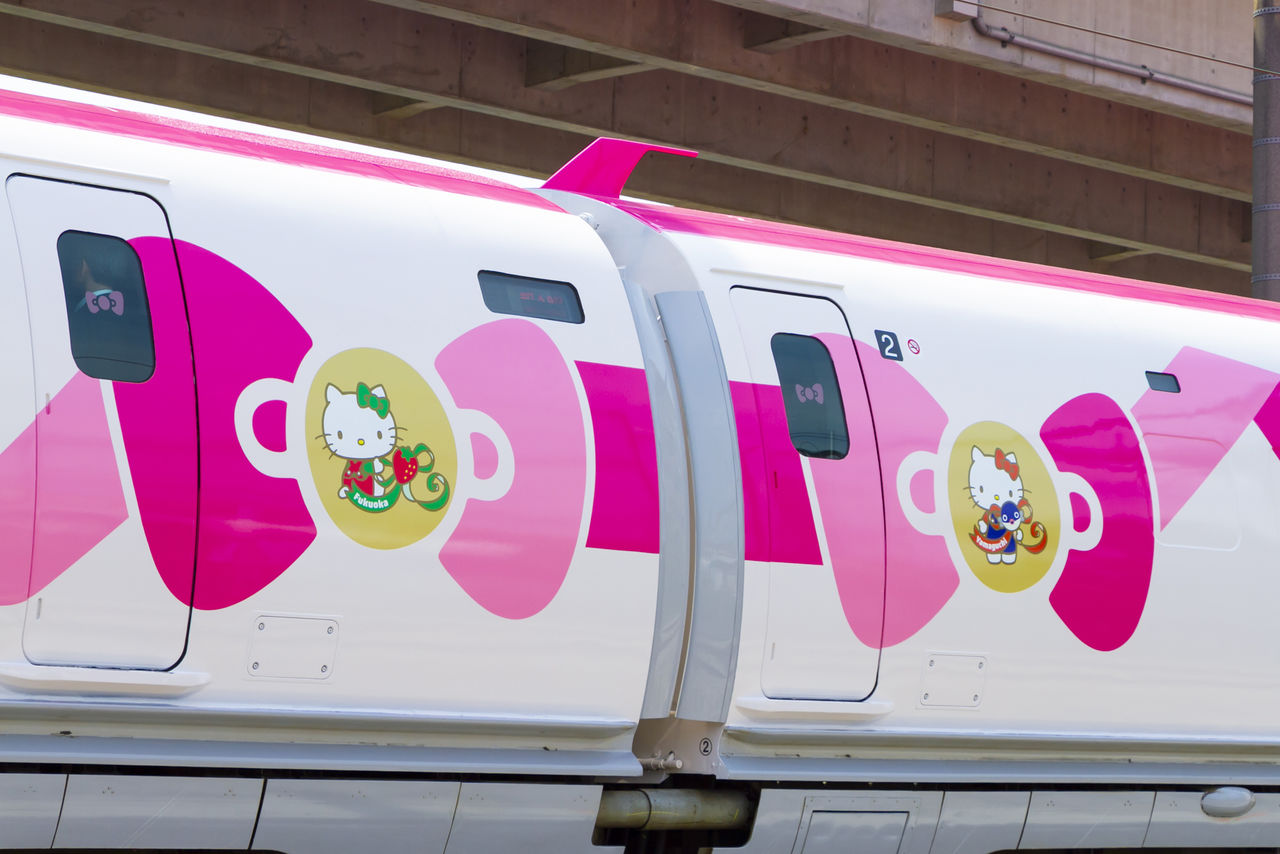 Eight original Hello Kitty designs have been added to the Shinkansen's design, each one holding a local product representing each of the prefectures the train passes by on its journey. Some of these include a green apple for Tottori prefecture, a black shell for Shimane prefecture, and a strawberry for Fukuoka prefecture. Other areas highlighted include Osaka, Hyogo, Okayama, Hiroshima, and Yamaguchi. 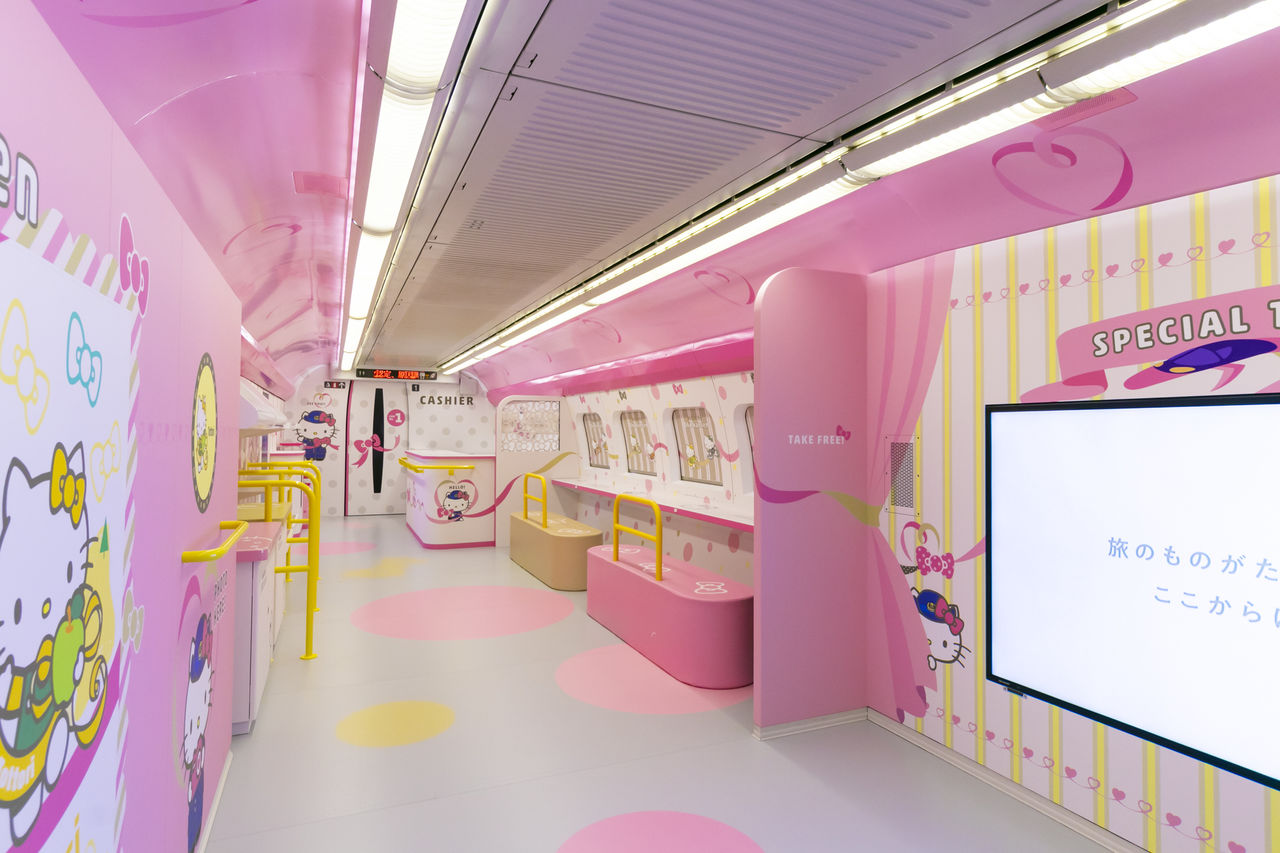 Other than the regular passenger areas, two seat-less train cars have been specially designed to give travelers the ultimate Hello Kitty experience. Car 1 is named “Hello! Plaza”, and is dedicated to showcasing local Japanese products including food, souvenirs, and specialty items. According to Japan Railway, this room features areas for shopping, rest, and a photo spot, as well as a video corner. 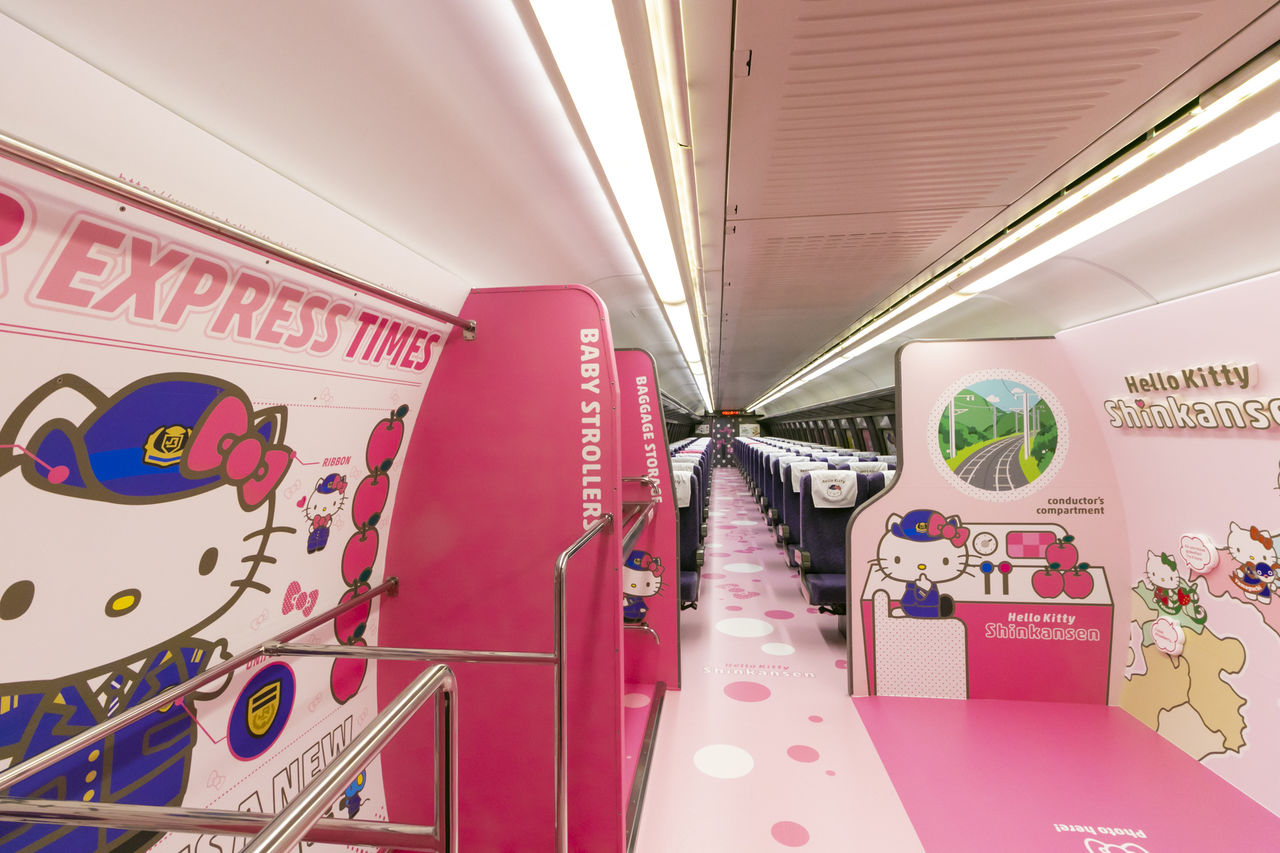 Car 2 is called the “Kawaii! Room”, and it is decked from head to toe in pink. Passengers will be greeted by life-size Hello Kitty doll wearing the Shinkansen uniform standing in a photo booth where fans can take pictures. The car also features other items, all of them in the theme of Hello Kitty and friends.

A special Hello Kitty themed cafe, as well as a souvenir shop featuring exclusive Hello Kitty Shinkansen merchandise, were opened at the Hakata Station. Arrive early with time to spare before your journey or spend some time when you get off the train (depending on where you start/stop), and have some fun at these places!

Prices for the Hello Kitty Shinkansen are similar to regular bullet trains in Japan. Tickets for the train are also included in a Japan Rail (JR) pass, so if you already have one, you are set to go! There are even said to be free seats given out, but we cannot confirm the availability of them on any particular day.

Reservations are also technically not required, but we would suggest you do it anyway, given the recent launch, demand, and potentially short run of the Hello Kitty Shinkansen. Car 1 (Hello! Plaza) and Car 2 (Kawaii! Room) are free to enter, but depending on how many passengers are waiting in line, you might have to wait for some time to gain admission. You might also want to reserve your ticket for Car 2 in advance.

You can book your tickets at any JR office or online through the JR website. The Hello Kitty Shinkansen numbers are Kodama 730 (Hakata to Shin-Osaka) and Kodama 741 (Shin-Osaka to Hakata).

You can find the complete timetable for the Hello Kitty Shinkansen here.