How It Happened: She Found Faith Once Again 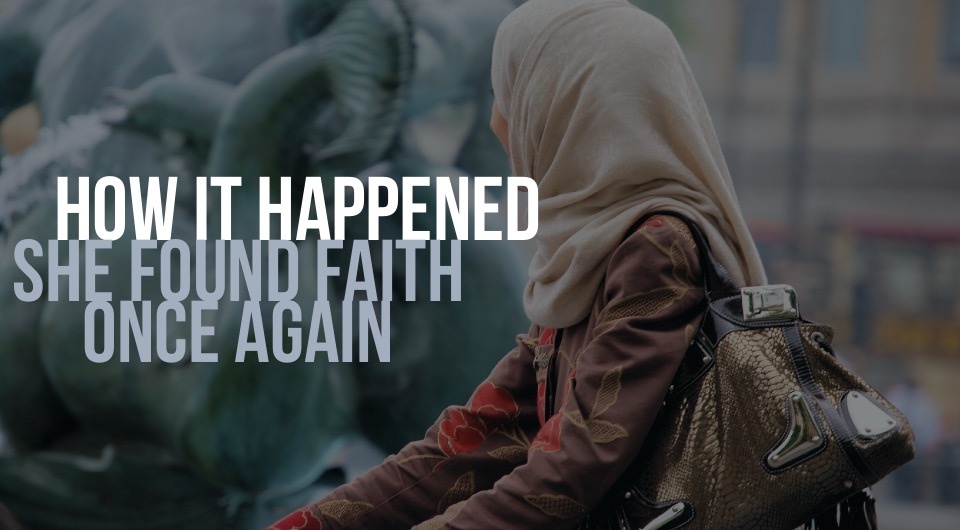 "What with Islamophobia all the rage now, it’s easier to lie low than truly embrace this gift of guidance."

Not many of us have the opportunity to turn our lives around. Not many of us need to, in fact. If you are a born Muslim (as I am), we don’t truly appreciate this blessing of Islam that we have been given. We take for granted the teachings we grew up with, rebel in the face of what’s trending in the world right now, and even become shy to expose our faith in certain situations because we don’t know how people will perceive us. What with Islamophobia and all the rage now, it’s easier to lay low than to truly embrace this gift of guidance.

What about those who have had to search for the truth though? Those who have spent their lives not knowing what was missing until they found it? I occasionally wonder about the fact that if I wasn’t born a Muslim, would I be fortunate enough to find Islam in my life? I don’t think I would, which is when I am immensely grateful for what I have.

Sharmila didn’t think she would find it either. She didn’t think about it at all, actually. Her father, a Muslim, married her mother, a Christian, which was outrageous at the time, and so her father’s family cut them off. They were initially raised with both religions – learning to read the Qur’an as well as the teachings of the Bible – but after a while, Islam was given up and they were brought up as strong Pentecostal Christians. Having lost touch with her father’s family, they had no contact with Muslims and the Islamic way of life, and being ostracised, they had no interest in it either.

I need to pause here to mention that cutting someone off because they are not Muslim instead of welcoming them is not the Islamic way. In separating them from the only Islam they know, they not only get a bad impression of the religion and its people but also have few other options to learn about its teachings and practices.

This is exactly what happened with Sharmila and her family. Not knowing any other way of life, they identified themselves as Christians. Both her parents passed away and the three siblings went through life in their different ways. Her older sister was deeply religious, her brother got into drugs and trouble, and she was a rebel, living it up. It was only in moving to Dubai, UAE that she met other Muslims and realized that her impression of them was not correct. “We thought all Muslims were bad people,” she says. “Only once I came to Dubai and spoke to the locals did I realize that everything I thought I knew was wrong.”

She got married, had a child, worked, drank, partied, got divorced, and dated – did it all. Fast forward a number of years to when she was dating a Pakistani. After 10 years of going out, they decided to get married. That was the first time that she had to come face-to-face with a decision that could change her life: to accept Islam or not. He was firm on the fact that if he was to marry her, she had to be Muslim.

It was sometime during those ten years, out of sheer coincidence, she had reconnected with her father’s side of the family who also resided in Dubai. To her cousin’s children, she was the long-lost aunt. In having Muslim family though, she also had support and understanding. They were excited about her converting to Islam but reinstated that she shouldn’t be doing it just to get married, but for herself.

Sharmila didn’t know what she wanted. She was terrified that she was making a great mistake, throwing away everything she knew for something she didn’t. She didn’t fully know the teachings of Islam to truly want to accept it. She was in a dilemma. To make matters worse, her sister completely opposed the idea, and her workplace demoted her from being a Personal Assistant for three years to a receptionist as they disagreed with her needing to revert. “That was my first test,” she says. “I was disappointed but saw it for what it was and didn’t want to fail this test.” She headed to the church to pray for guidance but felt no peace.

Then she started to pray the Islamic way, the little that she had been taught. She didn’t know the words exactly but just going through the motions felt so right. “Specifically when I got on my knees and put down my head, I feel such a sense of relief.” That was when she knew what she had to do.

Today, Sharmila is a mother of two and admits that life is not perfect. She is tested in many ways but finds it easy to bear it with her faith. Her friends, who never believed that she could become a Muslim and cover up the way she does, are astonished. Embracing Islam has changed her in many ways. “My friends say I’m a totally different person.” Despite everything, she says, she has peace.

Sharmila’s sister was disapproving of her change of faith then and continues to be so, but Sharmila never cut herself off the way their family did. She was welcomed into her sister’s home when she traveled to Sri Lanka on vacation, and never flaunts her practices of Islam to upset her sister, but passes on the message of her religion in a subtle way when she can.

She says that after she reverted, she felt very comfortable. Now when she thinks about it, her previous life feels like exactly that – another life. “How foolish of me to think that it was cool to show off my body and drink and party like that,” she says. “So childish!”

If you are on the outside looking in, you might wonder why people convert to Islam. When the glitz of this world looks so appealing, how can covering up be attractive? Those who have lived that life will tell you that in accepting Islam, they find peace. Chasing the world and what it has to offer always leaves you one step behind as what you are chasing is just out of reach. Talk to a revert and discover that there is more to life than what you see. Most people don’t understand the unseen and so refuse to accept it. But taking that leap? That is faith.