Like other peoples, the Palestinian people are distinguished by certain types of food, which have a material and moral value to them. Almost every Palestinian city is characterized by a certain type of food that is frequently cooked on occasions, especially during the blessed month of Ramadan in banquets and collective Iftars.

Dishes that the Palestinian table is not without: 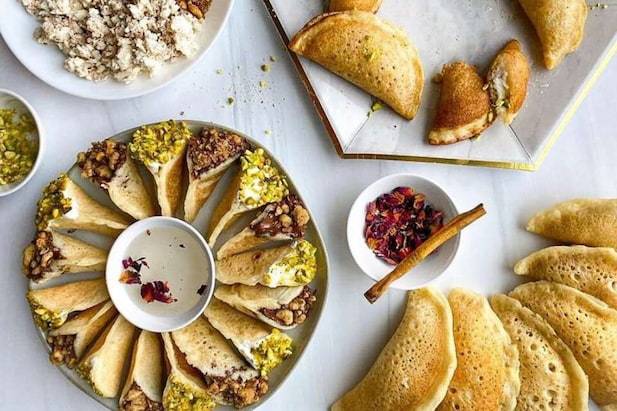 The Palestinian table in the month of Ramadan is decorated with different types of food, starting with the appetizers, and ending with the main dish. The breakfast table of Palestinian families are not without hummus, and pickles of various kinds, such as eggplant, cucumbers, carrots, and lemons as appetizers, and sometimes samosas with various fillings, whether with minced meat or cheese. 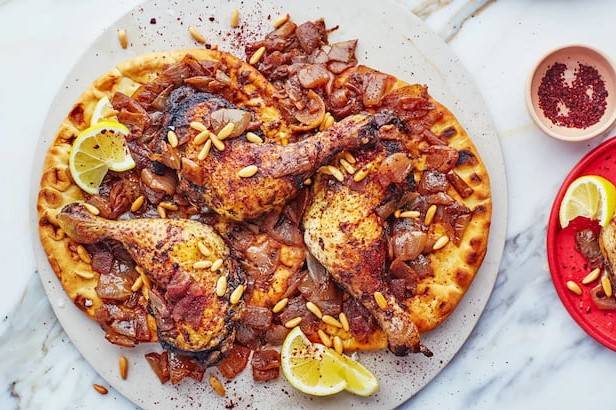 Cities of the West Bank are characterized by the dishes of Musakhan and Mansaf. Palestinians prepare these dishes at weddings and feasts during the month of Ramadan.

Musakhan consists of agricultural Saj bread and chicken, in addition to some nuts, onion juice, and fried potatoes. The method of preparing it is carried out in two stages. First: preparing Saj bread, which is a mixture of white and black flour, one kilo of each type, we knead it with lukewarm water after adding a little of salt and two tablespoons of yeast, the dough is cut into medium-sized discs and rolled out to the size of a sheet pan and baked on wood. What a beautiful taste if the wood was from lemon or orange trees, as it adds a distinctive flavor to the sheet, and thus we have finished the first stage of preparing Musakhan.

The second stage is the preparation of Musakhan for eating. First, we boil the chicken with spices, bay leaf, cardamom, and a few cloves; these spices add a distinctive flavor to the soup. While boiling the chicken, we prepare the onion paste consisting of chopped onions seasoned with municipal sumac, black pepper, spices, and ground cardamom. It is possible to add the liver and chicken gizzards to the onion paste. We also prepare a number of fried almonds or pine nuts, in addition, fried potato slices.

After preparing all the ingredients, we bring the fried almonds or pine nuts and add them to the onion juice, then we bring a cup of olive oil and a little chicken soup in a bowl, we dip the Saj bread in the soup, then we sprinkle two or three tablespoons of olive oil along with a loaf of Saj bread, we bring the onion juice and put an amount of it in the middle of the loaf and add a few fried potatoes, then we bring the chicken pieces that we have seasoned with a little sauce, sumac and spices and roasted a little in the oven so that we put them on top of the onion and potatoes and close the edges of the saj loaf and wet it again with olive oil and syrup and stack the loaves according to the quantity. We put the required on a baking tray and put it in medium heat for ten minutes and then stack it on a serving plate. 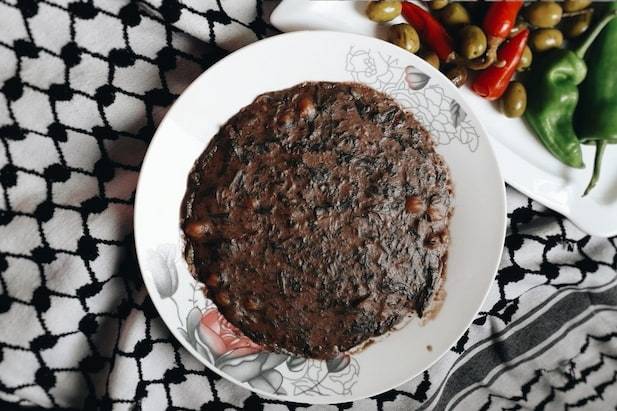 As soon as the Mufti announces the sighting of the crescent of the month of Shawwal and the beginning of the days of Eid al-Fitr, you find that the women have gathered late at night at one of the houses that intend to prepare the Sammaqiya stew, distributing roles among them; So that they can finish the cooking process quickly and pour it into serving dishes, where it is served cold with pickles and fresh homemade bread. Although it requires a number of women to finish it, it is easy to prepare, and any woman can do it on her own.

The recipe consists of an ounce of sumac, which is characterized by acidity, a kilo of onions, and a kilo of minced meat in small cubes, an ounce of well-soaked chickpeas, a head of garlic, red tahini, as needed, approximately half a package, a kilo of finely chopped fresh Swiss chard, an amount of ain al-Jaradah. Dried green pepper, chili, salt to taste - corn oil - and white flour as needed.

As for the method of preparation, it is to cut the onion finely and stir it a little with corn oil, and then add to it a kilo of meat and soaked chickpeas, and leave them a little on low heat, then add garlic after finely chopping with green pepper, chili and dried locust eye and leave it until the meat is half cooked, then put Onions, and then cover until the chard is completely cooked and changes color, and then we have boiled the love sumac in a liter of water, and we filter it well after squeezing it, and then we dissolve the amount of white flour five tablespoons in the sumac water, and then put it on the previous mixture and leave it for a while A quarter of an hour until the ingredients mix together and we keep stirring in a circular motion until the mixture mixes and becomes homogeneous, and finally add the amount of red tahini gradually and continue to stir quickly for five minutes, then we take the cooking off the fire and pour it into serving dishes.