Indonesia has a large Muslim population, making it one of the world's most populous Muslim countries. The World Population Review estimates Indonesia's Muslim population at 229 million people in 2020, accounting for 87.2% of the total population.

Therefore, in Indonesia, you will find many mosques that have varying beauty and uniqueness.

Well, if you are visiting Indonesia on vacation, you must stop by the following mosques. The scenery will astonish you with its beauty, splendor, and uniqueness. 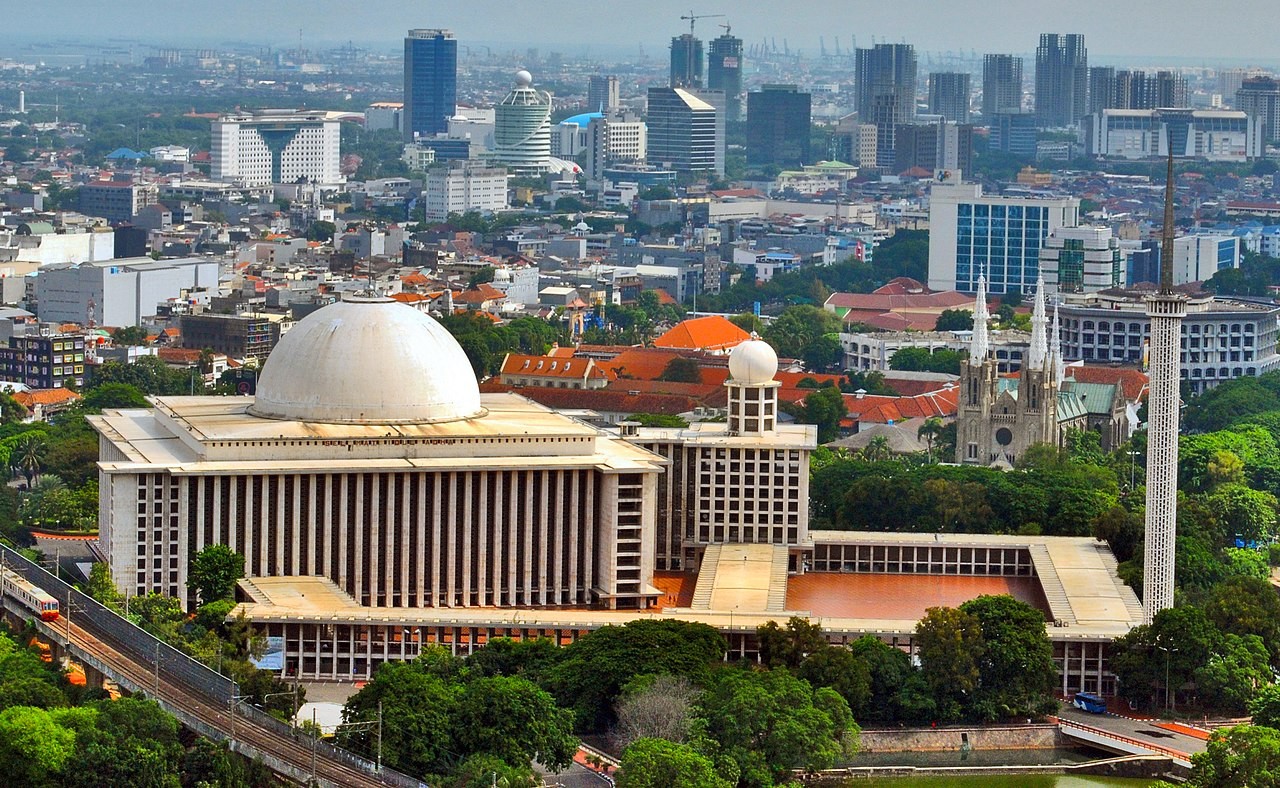 No one hasn't heard about the Istiqlal mosque, located in the Central Jakarta area near the National Monument.

It is the largest mosque in Southeast Asia, accommodating 200,000 worshipers. An architect named Frederich Silaban, a Christian, designed the Istiqlal mosque in a modern architectural style.

The floor and walls of the mosque, constructed in 1951, are covered in marble and decorated with geometric ornaments made of stainless steel.

In the mosque, every corner seems to have a special meaning.

The mosque has five floors, representing the five pillars of Islam. As for Istiqlal, it has only one tower to symbolize God as the Almighty. This tower is covered in marble, measuring 5 meters in diameter and 6.66 meters in height, which represents the number of verses in the Koran.

Meanwhile, there are seven gates at Istiqlal Mosque representing the seven layers of the sky according to the Koran.

In the main room of the mosque, there are also 12 sturdy pillars that represent the 12th day of Rabiul Awal, the day the Prophet Muhammad was born.

As for the dome, it has a diameter of 45 meters, which represents Indonesia's independence year, 1945.

Another unique feature found at the Istiqlal Mosque area is a giant traditional drum that measures 3.5 meters in diameter and weighs more than two tons.

Supported on special wood with Arabic calligraphy and Javanese carvings, this drum is a striking piece to look at.

Get Directions and Learn more about the Istiqlal Mosque here 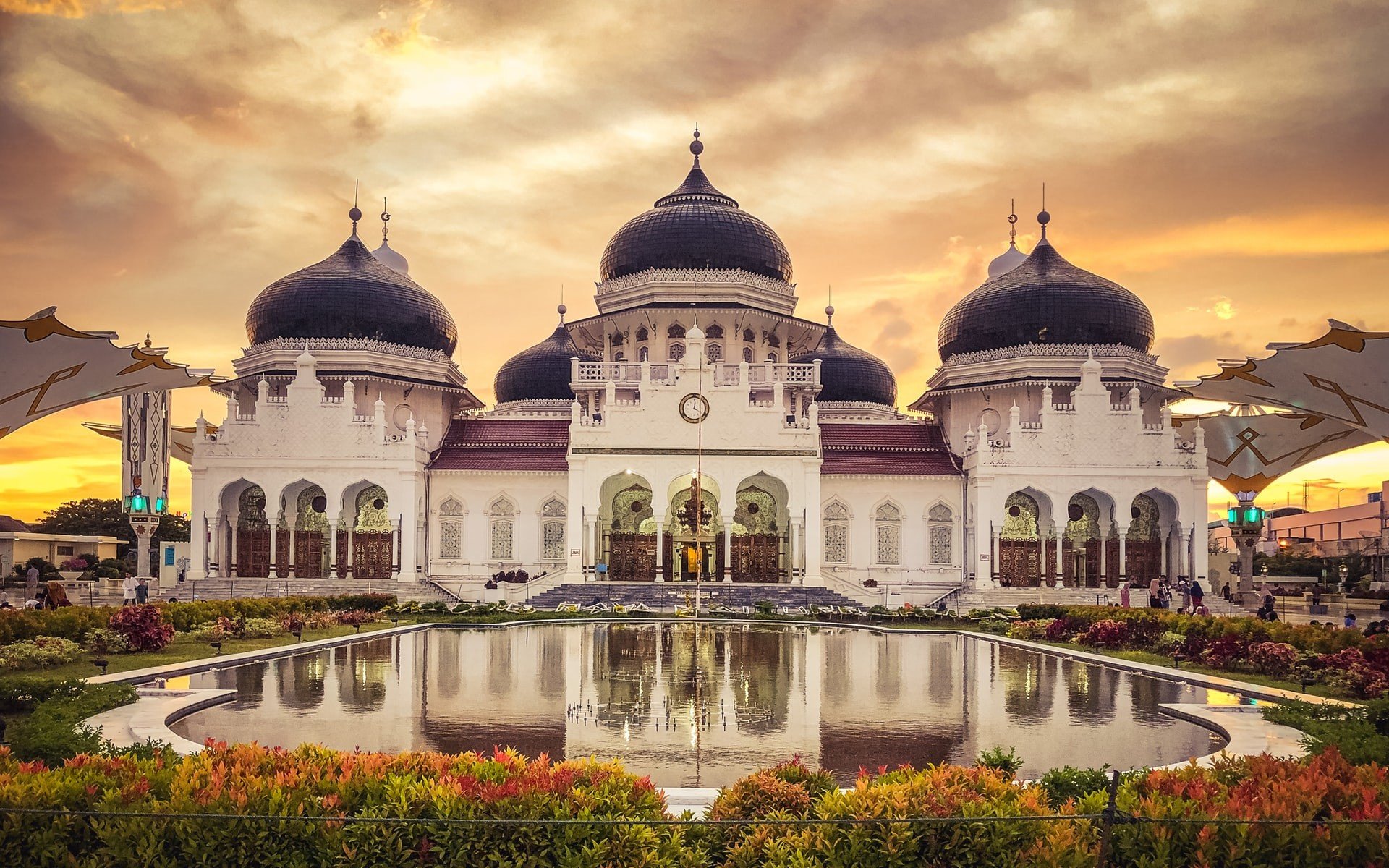 A mosque in the style of Moghul (Indian) architecture has seven wooden domes, eight minarets, and 32 pillars. In the courtyard of the mosque, there is a large automatic umbrella that can be extended or retracted.

It is located on an area of four hectares and bears witness to the destruction wrought by the tsunami in 2004. The mosque still stands strong in spite of the tsunami damaging some parts of it.

When it comes to the history of the construction of Baiturrahman Aceh Grand Mosque, there are two versions. The mosque is said to have been founded in 1292 by Sultan Alauddin Johan Mahmudsyah. However, other sources claim that Sultan Iskandar Muda founded the mosque in 1612.

In the course of its journey, the Baiturrahman Grand Mosque was badly damaged by the Dutch during the attack on Koetaradja (Banda Aceh) on April 10, 1873.

A collapse of the mosque building sparked Acehnese resistance. They fought until they shed their last drops of blood to protect the mosque. Major General Johan Harmen Rudolf Köhler, the Dutch commander at the time, was killed in that battle on April 14, 1873.

The Dutch then rebuilt the mosque building under the supervision of General Van Der Heijden. The building of this mosque is part of a plan to reduce resistance by the Acehnese to Dutch rule.

In recent years, the mosque, located in the heart of Banda Aceh City, has been expanded multiple times. The first was in 1936.

A. P. H. Van Aken led the effort to build two domes at the left and right corners of the mosque. A second expansion of the mosque building took place between 1958-1965.

This second expansion added two domes and two towers on the west side (mihrab). Each dome represents one of the five elements in Pancasila (Indonesia's Five Principles).

Get Directions and Learn more about the Baiturrahman Great Mosque here 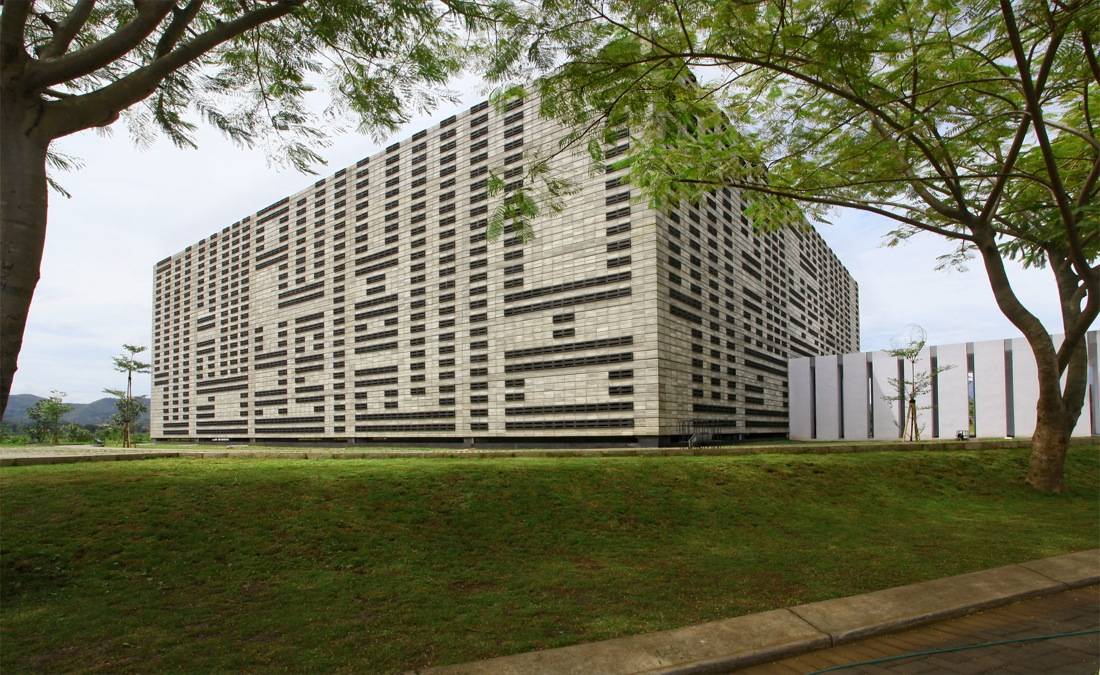 On September 7, 2009, this modern mosque was built on a plot measuring one hectare on Jalan Parahyangan, km 2.7, in Kota Baru Parahyangan, Padalarang District, West Bandung Regency, and inaugurated in August 2010.

In an interesting twist, the architect of this building is Ridwan Kamil, a former mayor of Bandung who is now governor of West Java.

In terms of art and philosophy, the Al Irsyad Mosque building is quite impressive. It is also influenced by the concept of tawaf around the mosque and the shape of the dome-like in Mecca.

The exterior of the building has carved stones depicting the Creed.

As the black stones on the mosque's walls act as a means of air circulation.

At night, the light from the mosque will shine through the stone crevice and form the silhouette of the creed. So fabulous!

Then, let's have a peek inside the mosque.

As soon as you enter the main room, you will see a lot of square ornaments. Turn the light on, and you'll see an outline of Asmaul Husna, totaling 99.

As for the Mihrab, it is not the usual one.

A long open hallway narrows into a pool of water near the end of the path. Afterward, worshipers will have a direct view of the beautiful garden. The mosque can accommodate around 1,500 people.

The Al Irsyad Mosque offers several interesting spots for photography besides its use as a mosque. These spots will not interfere with the worship in the mosque, of course.

During the building of the Al Irsyad Mosque, IDR 7 billion was spent, and the mosque has received world awards.

There were nominations for the Archdaily's Best 5 World Buildings of The Year category for Religious Buildings and the BCI Asia's Green Leadership Awards.

Get Directions and Learn more about the Al-Irsyad Mosque here 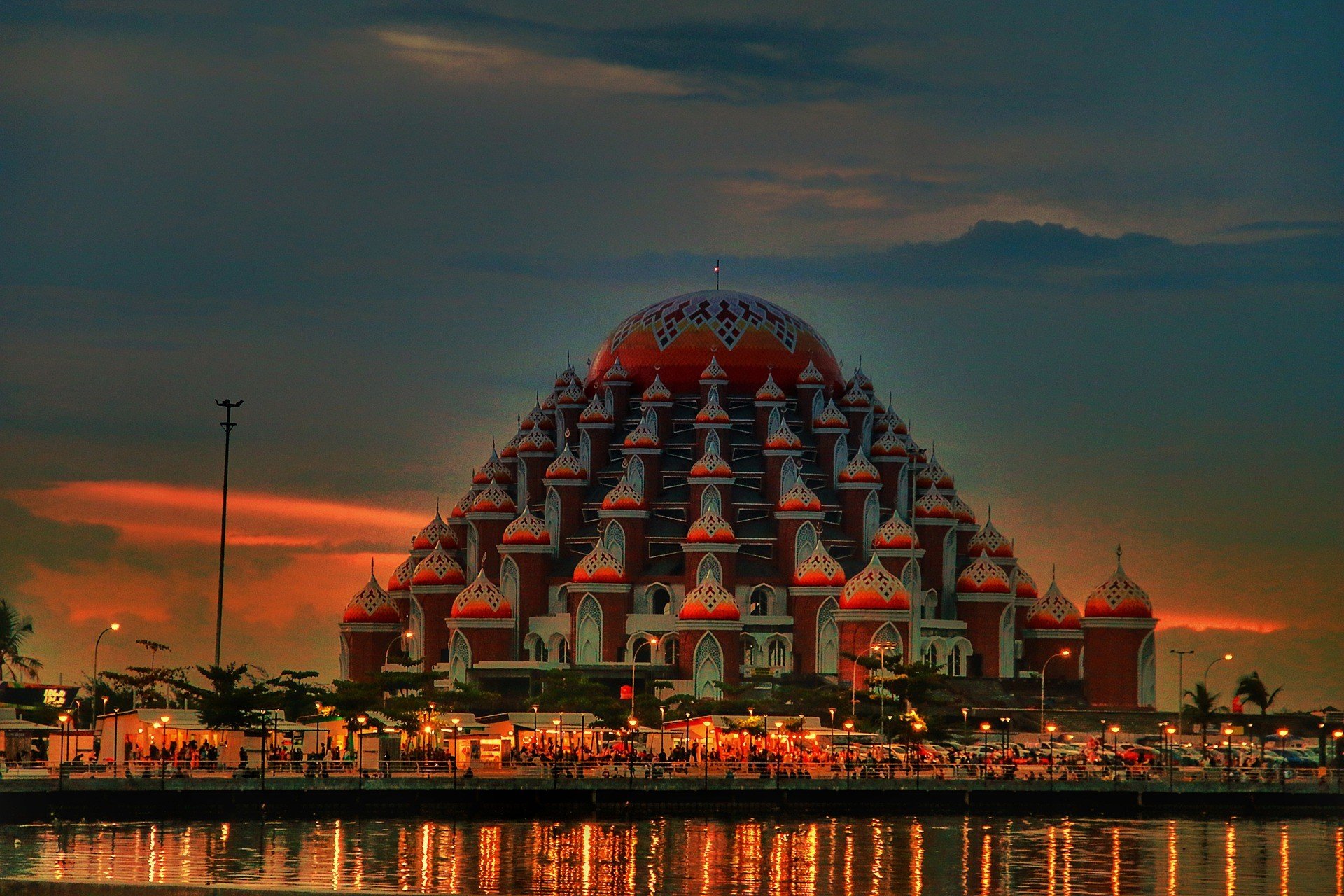 Makassar City, South Sulawesi province, has a unique mosque that travelers can visit. It is called 99 Dome Mosque where the location is right on the edge of Losari Beach.

It has been named after Allah's 99 names, or also known as the Asmaul Husna.

With its 72 x 45 meters building area, the mosque can accommodate 13 thousand people in three sections. Providing enough space for 3,880 worshippers in each prayer room.

A mosque with dozens of colorful domes of various sizes appears striking, monumental, majestic, and elegant as its name implies.

If you wish to see the beauty of the Makassar 99 Dome Mosque, then you should not leave immediately after offering the Asr prayer. At sunset, you will see that beauty.

In this mosque, the original architecture will be combined with an orange-tinged touch. The dome looks majestic. The panorama is amazing too.

Considering its unique shape, the 99 Dome Makassar Mosque should be one of the 30 most unique mosques in the world. South Sulawesi's most famous mosque is also on the list of Indonesia's ten unique mosques. 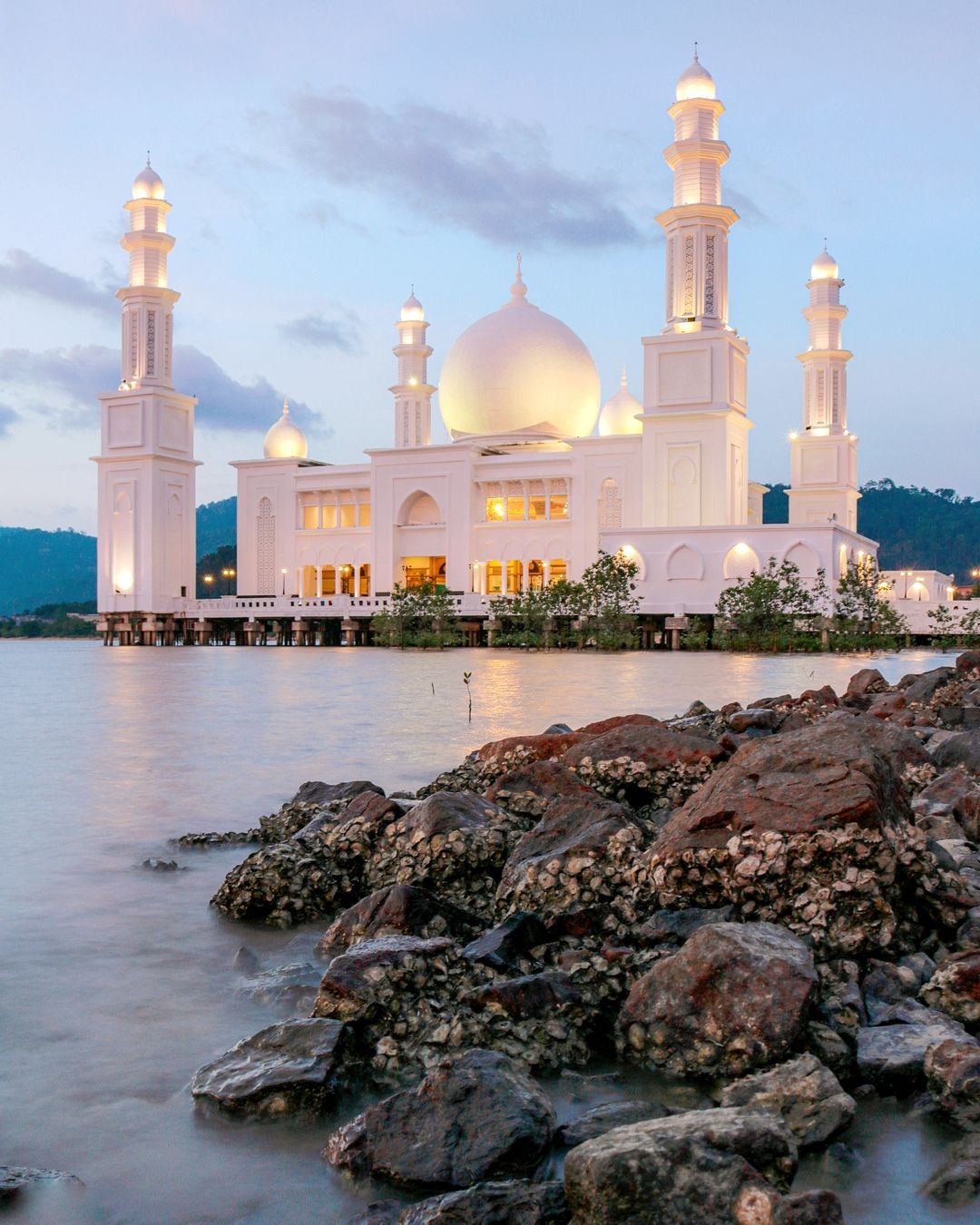 The mosque on Jalan Karang, Sutra Village, Sukadana District, North Kayong Regency, West Kalimantan, is not what you would expect.

The mosque floats above the sea and is surrounded by Gunung Palung National Park.

With an area of 50 x 50 meters, its architecture is similar to the floating mosque, Arrahman, in Jeddah.

In contrast, the interior of the mosque is made in Moroccan style. It can accommodate 3,000 people. The building's surroundings are painted white. There are calligraphy carvings in the mosque as well.