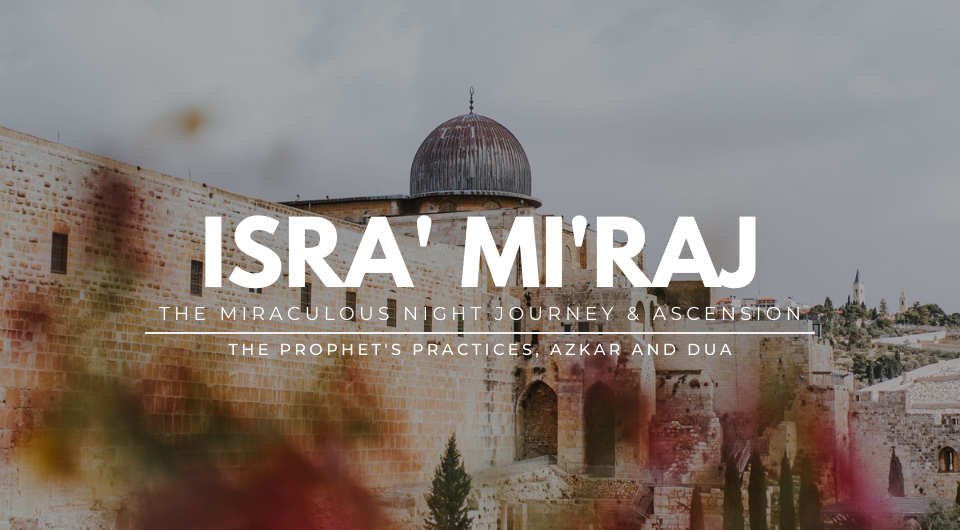 "Exalted is He who took His Servant [i.e., Prophet Muhammad (ﷺ)] by night from al-Masjid al-Ḥarām to al-Masjid al-Aqṣā, whose surroundings We have blessed, to show him of Our signs. Indeed, He is the Hearing, the Seeing."

The events of the Isra Mi'raj are beautifully epitomized in Surah Al-Isra, 17:1. Strengthened by several Sahih Hadiths as well. Isra Mi'raj was a miraculous journey taken by our beloved prophet, Muhammad SAW, where he traveled from Makkah to Masjid al-Aqsa in Jerusalem, before finally ascending to heaven. All in a small portion of one night.

Although Muslim historians and scholars are not able to pinpoint the exact date when this happened, it is widely believed that this event happened on 27th Rajab, roughly one year before the emigration of Prophet Muhammad SAW to Madinah. Today, Isra Mi'raj holds great significance to Muslims worldwide, reminding us of the greatness of Allah SWT.

A Time of Hardship

Isra Mi'raj occurred when the Prophet (SAW) was facing a time of hardship and pain. The Prophet (SAW) had just lost two of the most beloved people in his life, his wife Khadijah RA and his uncle Abu Talib in a year, also known as the Year of Sorrow (Aam al-Huzn). Both of whom were his strongest supporter and ally. Despite going through such a challenging trial, he still carried on to serve Allah SWT wholeheartedly.

Having been ridiculed, humiliated, and oppressed by the Quraysh in Makkah, the Prophet SAW traveled to Ta'if (now known as Madinah) with hopes of spreading the words of truth. However, the people of Ta'if not only rejected him but also attacked him. Throwing stones at him until he left the city.

Even after so much suffering, Prophet Muhammad SAW proceeded to forgive them and even prayed for the people of Ta'if. An example of how much the Prophet SAW really cared for his people.

After going through so much, Prophet Muhammad SAW was gifted by Allah SWT with a gift that is Isra Mi'raj. A journey to the Sacred Sanctuary and ultimately into the Divine Presence of Allah SWT.

Isra Mi'raj truly shows us the importance of the great gift that is Salah. The daily prayers are so important that Prophet Muhammad (SAW) was personally called to the heavens to receive this injunction when the other injunctions were revealed through Jibril (AS) on Earth.

When it was first decreed, Allah SWT commanded that every Muslim is to pray 50 times a day. But after meeting with Prophet Musa AS, Prophet Muhammad SAW went back and negotiated for a reduction in the number of prayers per day. The negotiation continued a few times before it was finally settled at five times per day. Even with the reduction from 50 to five, the rewards still stay the same as praying 50 times a day. Such is the generosity and mercy of Allah SWT to his creations and the love of Prophet Muhammad SAW to his Ummah.

As Narrated by Ibn 'Abbas and Abu Haiyya Al-Ansari:

With Hardship, Will Be Ease

Isra Mi'raj happened during a time of great challenge for our beloved Prophet Muhammad SAW. It was just after the passing of his beloved wife, Khadijah RA, and his uncle, Abu Talib, two of his closest ally. Add to that the unpleasant treatment from the Quraysh and the rejection of the people of Ta'if. Through all that, Prophet Muhammad SAW remained unfazed and still continued to serve Allah SWT. For that was when Prophet Muhammad SAW was rewarded with the miraculous journey that is Isra Mi'raj. Where he returned to Earth calmer and ever more reliant on Allah SWT.

Indeed one of the most notable lessons of Isra' Mi'raj is: