Masjids are one of the most important pillars of Islamic society, and the building of a Muslim's personality would not be complete without them. Therefore, they have been of great importance in all Arab countries. In addition to their importance in building the Islamic community, Masjids are among the archaeological monuments that attract tourists from all over the world.

We will learn together about the most Notable Masjids in the Arab world.

1. The Grand Masjid in Mecca 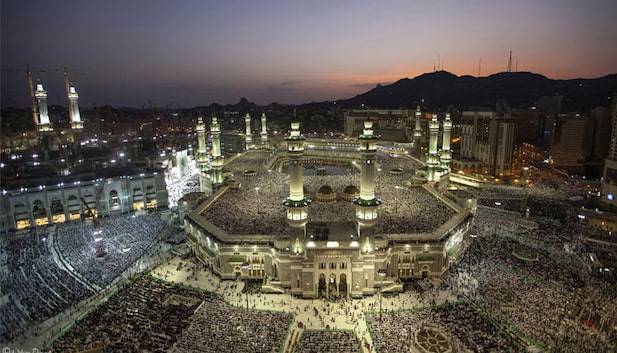 The first house was built for Muslims to worship God Almighty. The Grand Masjid is located in the heart of the city of Mecca in western Saudi Arabia, with the Kaaba in the middle. The area of the Grand Masjid is 400,800 square meters, and it has a capacity of four million. The mosque has thirteen minarets, each 1,89 m high.

2. The Prophet's Masjid in Medina

The Prophet’s Masjid in Medina is the second holiest of Islamic religious sites after the Grand Masjid in Mecca. It was built by the Prophet Muhammad (peace be upon him) in Medina after his migration in the year 1 AH corresponding to 622 next to his house after the construction of the Quba Masjid.

The Masjid, after centuries of expansion, contains the tomb of the Prophet Muhammad and the tombs of the two caliphs Abu Bakr Al-Siddiq and Omar bin Al-Khattab, as well as the homes of the Prophet's wives, in addition to the kindergarten. It accommodates about 1.8 million serums at a time. The Prophet’s Masjid has many doors, more than 100 doors, distributed on its four sides, in an exquisite architectural form, including Bab al-Salam, located on the western side of the Prophet’s Masjid.

The mission of serving and caring for the Prophet’s Masjid is one of the responsibilities of the Saudi royal court, which is why the Saudi king is called “the Custodian of the Two Holy Masjids”.

3. Dome of the Rock and Al-Aqsa Mosque in Jerusalem 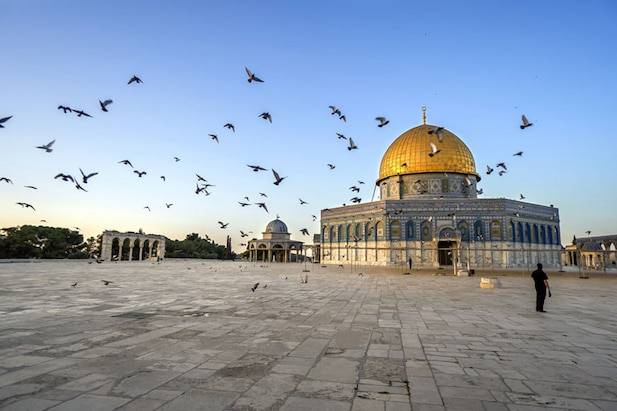 The Dome of the Rock chapel is one of the parts of the Al-Aqsa Mosque. It has preserved its construction from an architectural and artistic point of view as an example of the oldest Islamic building, including mosaics and stone pieces that constitute one of the architectural masterpieces of Islamic civilization. Its establishment dates back to the first Hijri century when it was built by the Umayyad Caliph Abd al-Malik bin Marwan in 66 AH on the site that was said to have witnessed the miracle of the Night Journey and Ascension.

Al-Aqsa Mosque is located in the old city of Jerusalem in the State of Palestine and was named Al-Aqsa because of the distance between it and the Grand Mosque. The mosque enjoys great sanctity for Muslims as it is the first of the two qiblas and the third of the two holy mosques. The mosque is one of the largest mosques in the world, with an area of approximately 144,000 square meters. One of its most famous landmarks is the Dome of the Rock. Its construction dates back to the Umayyad period around 715 AD.

4. The Umayyad Mosque in Damascus

The mosque was built by the Caliph Al-Walid I (705-715) when he came to power. It is located in the heart of the old city and has a rich history in all eras and civilizations.

In the Umayyad Mosque, the first minaret in Islam is called the Minaret of the Bride, and today it has three minarets, four doors, and a large dome, the Eagle Dome. 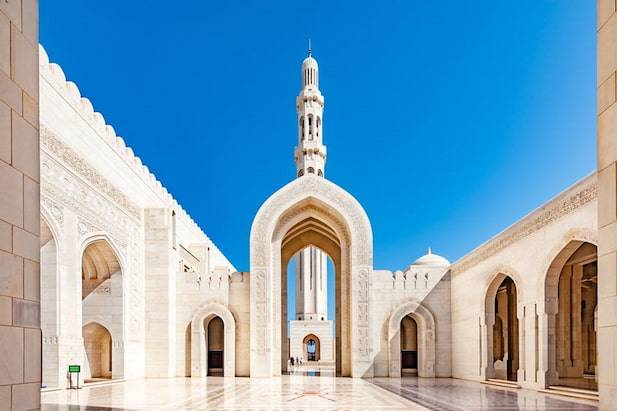 Sultan Qaboos Grand Mosque is the main mosque in the Sultanate of Oman, in which Arab architecture and in-depth information about Arab culture are evident, and it has a huge library of 20,000 pieces.

It is a magnificent building made of beautiful white sandstone, with five minarets and a huge dome in its center – the roofs of the mosque are intricately decorated with classic geometric designs.

It also houses the second largest handmade carpet in the world. The Sultan Qaboos Grand Mosque can accommodate 20,000 people, including 750 women in a private prayer hall.

Overlooking Khalid Lake in Sharjah, UAE. It was built in the classic Ottoman-style building under the patronage of Her Highness Sheikha Jawaher bint Muhammad Al Qasimi, President of the Supreme Council for Family Affairs in the Emirate of Sharjah.

Its external facade is distinguished by its distinctive minarets and domes. As for the interior design, you will be drawn to the calligraphic inscriptions from the verses of the Holy Quran and the amazingly decorated domes, arches and columns.

At the top of the mosque is a large dome surrounded by stained-glass windows.

It includes the largest wooden zakat box, which made it enter the Guinness Book of Records in 2014.

The most important and most famous mosques in Egypt and the Islamic world for more than a thousand years. The Fatimid Caliph Al-Muizz Li-Din Allah laid the cornerstone of Al-Azhar Mosque on Ramadan 14 359 AH corresponding to April 4, 970, making it the oldest existing Fatimid monument in Egypt.

Remains of a rich Fatimid stucco decoration still appear in some places of the mosque, in which natural or reduced vegetal elements (fronds) are mixed, as well as geometric shapes such as stars and inscriptions in floral Kufic script. 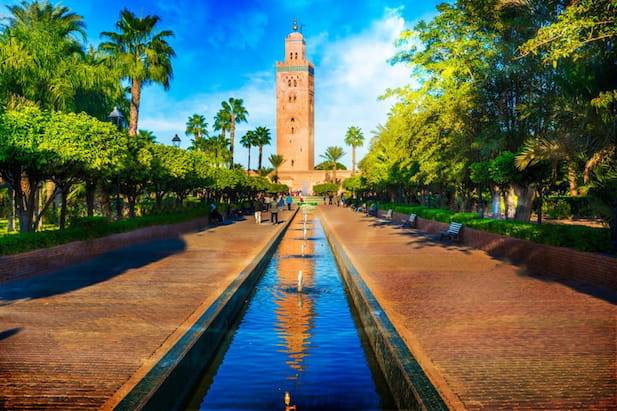 It is known as (Koutoubia Mosque) in reference to the souk of booksellers in which booksellers and calligraphers used to work in the vicinity of the mosque. The mosque is one of the oldest Moroccan mosques and an icon of Marrakesh.

It was built in 1147 AD on the ruins of an old Almoravid palace. It covers an area of 5,300 square meters, and consists of 17 wings, 11 domes decorated with inscriptions, a decorated rectangular prayer hall, and in the middle is a courtyard surrounded by lofty trees.

King Hussein Mosque is the largest and most recent mosque in Jordan. It is located in Amman in the Dabouq area at an altitude of 1013 m above sea level in King Hussein Gardens and in a strategic location overlooking Amman and the mountains of Wadi Al-Seer, where it can be seen from most areas of Amman.

The design of the mosque is dominated by the Islamic architecture of the Levant region and is characterized by its square shape, its four minarets, and its marble floor.

It was built during the reign of King Abdullah II on a plot of land with an area of about 60,000 square meters, it can accommodate about 5,500 worshippers, and the building area is about 8,000 square meters.