For most foreign tourists, Taiwan is considered to have a fairly comfortable, clean environment and is known for its friendly people.

The convenience of Taiwan was also felt by Muslim travelers.

Therefore, don't be surprised if the Global Muslim Traveler Index (GMTI) survey, released by Crescent Rating Mastercard in 2019, is the third country favored by Muslim Worlds tourists after the UK and Japan.

Currently, followers of the Islamic religion do not need to hesitate to visit Taiwan, because the Taiwanese government continues to try to provide comfort for Muslim Worlds tourists.

Currently, Taiwan has 46 units of Muslim-friendly property hotels. While 28 of them have received certification.

This number does not include the six tourist destinations around Taipei City which have also received Muslim-friendly certificates. These destinations are considered capable of complying with various related international standards.

And here are seven Muslim-friendly destinations in Taiwan. 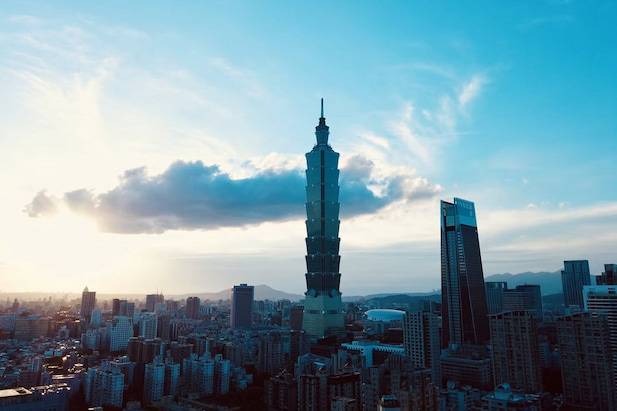 Taipei 101 or also known as 101 Tower, is one of the famous tourism icons in Taiwan.

Together with the Tokyo Skytree, Shanghai Tower, and Lotte World Tower, Taipei 101 is the tallest skyscraper in the world.

As the name implies, this building has 101 floors, counting from the basement to the top floor, with a height of 1,667 feet or 508 meters.

Therefore, Taipei 101 was the tallest building in the world until 2010, when it was finally surpassed by the Burj Khalifa skyscraper in Dubai, United Arab Emirates, which has a height of up to 828 meters.

The number 101 is also made to beat the highest number in the country because in Taiwanese belief, the number 100 is the highest.

Taipei 101 has its uniqueness, which is that it has an observatory on the 89th floor. From this floor, you can directly see the panoramic view of Taipei city, complete with the sparkling city lights and buildings at night.

The National Palace Museum was founded in 1965 and is located in Shilin District, Taipei, Taiwan (Republic of China). This museum is a museum where historical items are exhibited in the form of a collection of treasures kept by generations of ruling emperors of the Forbidden City.

These items include gold and jade. The National Palace Museum has a collection of nearly 700,000 imperial artifacts and works of ancient Chinese art.

In one of the rooms of this museum, hundreds of letter documents and books containing royal agreements, ancient cooperation letters, and certain policies are also stored.

Therefore, this museum is one of the largest museums for this type of museum in the world. There is a Muslim prayer room and a place for ablution in this museum, so it is one of the Muslim-friendly destinations you can visit.

To avoid crime, before entering the exhibition hall, visitors to this museum must pass various checks. Visitors are also not allowed to bring bags, food, and drinks into the museum.

Then, the display boxes of artifacts on display are equipped with shatter-resistant glass. Coupled with the supervision of very strict officers.

Not far from this museum there is a basement that is used as a special bunker to store special objects. And this bunker was built tens of meters underground a testament to that.

This bunker is also believed to be resistant to bomb attacks. 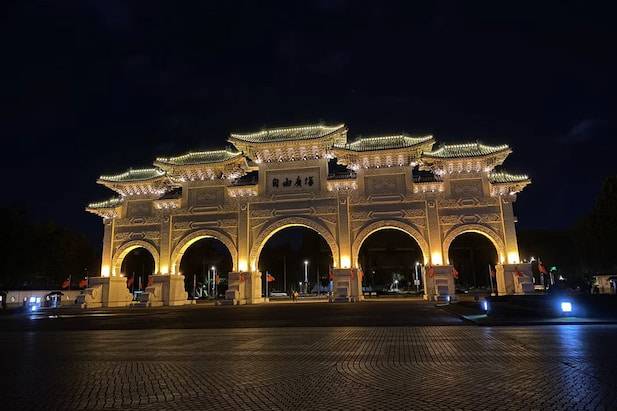 Image Credit: my nguyen on Unsplash

This building stands on an area of 250,000 square meters and is surrounded by a beautiful garden.

The Chiang Kai-shek Memorial Hall is a historical monument that stands east of Memorial Hall Square, flanked by the National Theater and National Concert Hall.

What makes this landmark unique, the building design uses white for the memorial hall. While the roof is blue. This is to represent the dominant color in the flag of the Republic of China.

There are pillars with signs of true truth outside the gates of Chiang Kai-shek Memorial Hall. This magnificent structure has become a symbol of Taipei City.

Chiang Kai-shek's life and political career are documented in the museum under the monument, as is Taiwan's history.

Such as prayer rooms and places to eat that have been certified halal. Because of its beauty and uniqueness, this one tourist destination is an idol for foreign travelers.

Taipei Children's Amusement Park is located in the Shilin District, Taipei. This location is a parent and child playground in Taipei, Taiwan.

In this area, there are 13 types of game facilities that you can visit. Starting from, the Ferris wheel, roller coaster, bumper cars, swinging ship, to the monorail. 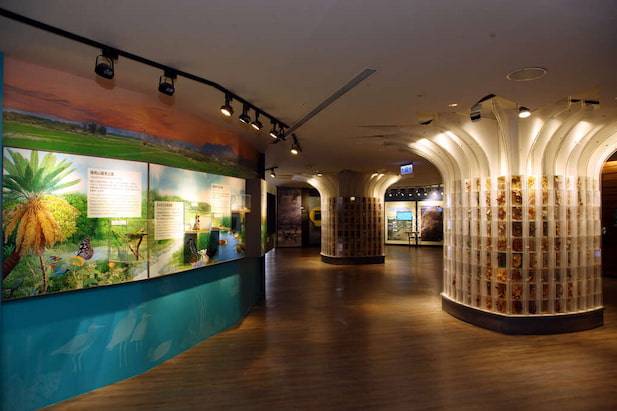 Another friendly tourist destination for Muslim tourists in Taiwan is the Discovery Center of Taipei. This place is one of the educational tours that is a pity to miss.

Taipei's architecture even tells a story about its evolution over time into the city it is today. Several exhibitions present Taipei's cultural heritage and natural history in full.

The Discovery Center Of Taipei has four floors. The first floor is the Taipei Impressions Hall, then the second floor is the Special Exhibitions Hall. In these two places, certain exhibitions are often held.

Then the third floor is the City Discovery Hall. In this place, tourists can see the changing streets of Taipei, and the history of its development. Furthermore, on the top floor or fourth floor, there is a “Dialogue with Time” Hall,

Even though it has been certified as Muslim-friendly, this place is still in the stage of improving facilities, such as halal-certified eating places, prayer rooms, and ablution places for Muslim tourists.

Taipei's Jiufen is a seaside mountainous area located in the Ruifang District of New Taipei City.

The location is quite beautiful, making Jiufen a shooting location for the film A City of Sadness, and became the inspiration for the place in the fantasy anime film Sen to Chihiro no Kamikakushi or Spirited Away produced by Studio Ghibli in 2001.

So, it's no wonder that many foreign tourists come to this place to see the real city in the film.

Before being known as a city similar to downtown in the film Spirited Away, Jiufen was better known as a gold mining district. Jiufen's prosperity began to be noticed towards the end of the Qing dynasty.

Jiufen grew into a city following the gold rush. During the Japanese occupation of Taiwan, Jiufen reached its peak of glory.

Unfortunately, after World War II gold mining activities in Jiufen experienced a decline. The gold mine in Jiufen was closed and the city was forgotten.

In the early 1990s, Jiufen's name was raised again after being used as a shooting location for a Taiwanese film titled A City of Sadness which was successful in the market.

If you want to have a culinary tour in Jiufen, you can head to Jiufen Old Street. Where you will see shops selling Jiufen's most famous rural snacks, such as sweet potatoes and various other local dishes.

In addition, Jiufen also has many different teahouses. During a visit to this mountain village, the teahouse is the best place to be.

How about lodging facilities in Jiufen? For this one, you don't need to worry, because the locals offer a variety of lodging options. You can choose it according to your taste and budget.

Well, for those of you Muslims who like adventure, immediately pack your clothes and fly to Taiwan, because this country has many Muslim-friendly destinations. 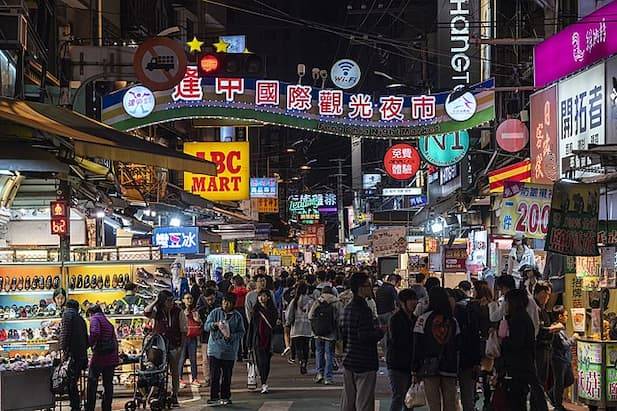 The next destination that you must visit when traveling to Taiwan is Fengji Night Market. Feng Jia night market is the most popular night market in Taichung city. It was only one kilometer from Feng Chia University.

In this night market, you can find a lot of delicious food. Apart from that, there are several shops along FengJia that you can visit. These include clothing, shoe, accessories, and cell phone stores.

You don't have to worry about the price. The prices of goods at Fengji Night Market are known to be cheap.

This market is visited by many local and foreign tourists. Most of them are young people.

You also don't need to worry if you bring your vehicle here, because there is adequate parking available and it is quite accessible.

Well, for those of you Muslims who like adventure, immediately pack your clothes and fly to Taiwan, because this country has many Muslim-friendly destinations.