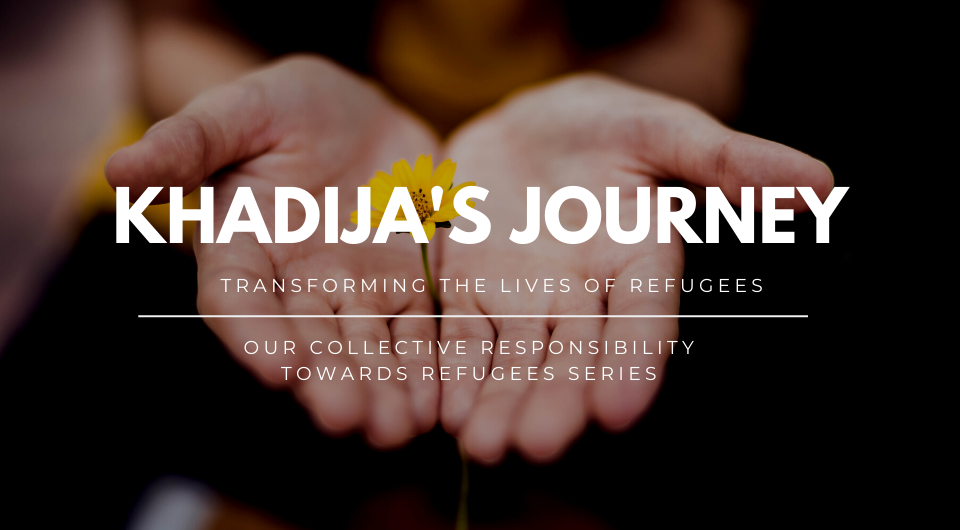 After crossing the Naf River from Myanmar on makeshift rafts, a group of Rohingya refugees trek towards Noaya Para Ghat, where they will spend the night before heading to a refugee camp in Teknaf, Bangladesh. © UNHCR/Andrew McConnell

In 2017, Khadija was forced to become a refugee, fleeing her home with her family when armed forces attacked and burned her village, Majipara.

“It took us 14 days to reach safety here in Bangladesh. Everywhere, there was beating, shooting and burning. We walked the whole way then crossed the river on a bamboo raft. When we arrived in this camp after our long journey, there was food, shelter and other care available. It was something I couldn’t have even imagined.”

Less than a year later, at the height of southeastern Bangladesh’s monsoon season, Khadija and her family lost their shelter to a landslide. Although none of her family members – her 60 year old mother Suvia, 10 year old daughter Nur Kalima and 4 year old son Saiful – were injured, they lost most of their scant belongings to the torrent of water and mud. They were quickly taken in and given shelter by fellow Rohingya refugee families who lived nearby.

UNHCR staff kept in close contact with Khadija and others affected by the landslide. One day, she received good news that her family had been built a new shelter in a safe, flat area of the Kutupalong settlement, and they would be relocated in the coming days.

“When we lived on the hillside, my children didn’t have space to play. Here, there are more opportunities, and they can make new friends.”

When moving day came, Khadija’s family had plenty of help: 10 volunteers to help carry their remaining household belongings, and a vehicle to transport 60-year-old Suvia, who has difficulty walking long distances.

UNHCR and its partners have relocated more than 34,000 Rohingya refugee families, most of whom were living on precarious hillsides or other areas at risk from floods and landslides. These relocated families have also received sleeping mats, buckets, kitchen supplies and other items to help them settle into their new shelters.

How can you support UNHCR’s on-the-ground work with refugees?

To facilitate the contributions of Muslims all over the world, UNHCR has launched its Refugee Zakat Fund, a trusted, compliant and effective distributor harnessing the power of Zakat to transform the lives of refugees. Let’s fulfill our responsibility towards refugees.

To learn more and contribute you can visit: https://bit.ly/HalalTripZakat

*This article is from CrescentRating-UNHCR’s Joint Publication - Forced Displacement : A Reality For Millions Of Women. You can learn more and download the publication here.