The next manageable stop with the kids was to Tsitsikamma which is about 190kms. Many are in disagreement regarding the actual outline of the garden route. Some say that it starts from Tsitsikamma and ends at Mossel Bay while others say that the Garden Route actually begins from Port Elizabeth and continues up to Still Bay. I personally feel that the Garden Route in all its glory is in fact from Jeffrey's Bay to Mossel Bay.

The highway en route to Tsitsikamma is a dual lane and well maintained so the drive is extremely pleasant. Although there are many minor towns that you will pass along the way, about 80 km from Port Elizabeth is the next coastal town - Jeffery Bay. This town like many of the others along the Garden Route is a tourist destination, brimming with BNBs and holiday homes. While the town is spoilt for choice in terms of beaches one of the better family beaches to keep an eye out for is the lagoon which is great for kayaking and children can safely play because the water level is relatively shallow. Alongside the lagoon, one will find an array of microlight aircraft whose take-offs and landings will leave you entertained for hours without even having to venture into the water. Like most beaches along the Garden Route the lagoon is surrounded by dunes, and just over the dunes is the main beach which is mostly dominated by fishermen. If it's waves that you are looking for though, a more swimming-appropriate beach would be Dolphin's Beach. With its white sands and the Indian Ocean currents crashing against the shore, it's an enchanting beach with many beach events and recreational activities in the immediate surroundings. The beach is just off the Main Road and food and drink are in abundance however finding halal food can be a bit problematic. A lovely option though situated on the Main Road is Trawlers Seafood which serves the most delicious fried fish – a delicacy that these towns are famous for. Also, the fish is fried in a completely separate fryer so you can ensure that there won't be any cross-contamination. 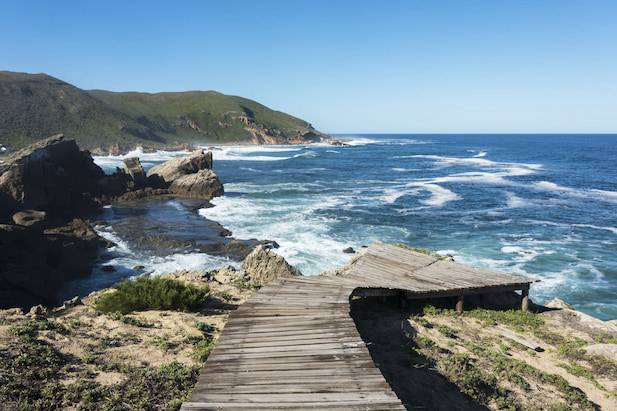 As you exit Jeffrey's Bay heading towards St Francis, you cross a man-made bridge built on the lagoon. This reminded me of the Oresund Bridge joining Sweden and Denmark but obviously on a much smaller scale. You drive through the water on a short strip to get to the other side. Be careful with your belonging though because the water is relatively deep and the road quite narrow. St Francis Bay is a delightful little town to pass through and to consider as a holiday destination at some point but it can be a bit impractical for a stop and swim as there are not many amenities within the vicinity. The 'village' as it likes to be known is filled with a number of holiday homes and is perfect for an isolated getaway. Although there is a picturesque lighthouse that is a great photo op and whale watching when in the season there is not really that much to do especially if you are with children. The main hub is the canal which is a charming South African version of Venice. Accommodation is strewn along the edge of the canal and kayaking and cruises are offered to guests giving them a tour around the canal. St Francis is literally a mini-village built around a canal. However, being this secluded there aren't that many shops or eateries but the town is a must-see en route to Tsitsikamma. 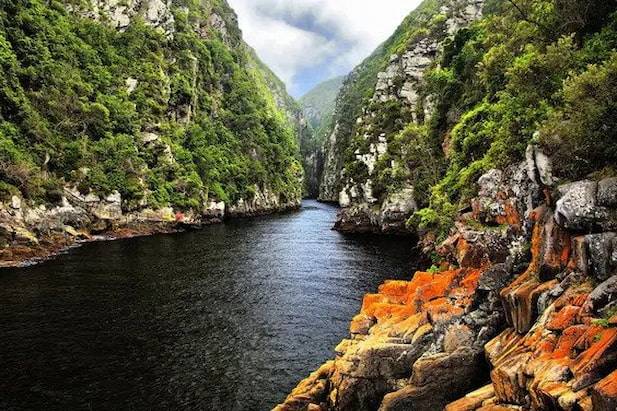 As one nears Tsitsikamma, the scenery gets greener but the cloud cover also becomes a bit more pronounced as you enter the mountainous region. Tsitsikamma is so strategically located that it almost looks cordoned off by the two infamous bridges - the Bloukrans and the Storms River Bridge. At you enter the region of Tsitsikamma you are greeted by Storms River Bridge also known as the Paul Sauer Bridge which comes in at about 120 meters high and 100m long. The bridge was named after Paul Sauer a prominent cabinet member who was part of the National Party for many years. As you drive on the N2 highway, just after the bridge, there is a petrol stop with a variety of fast-food eateries. Although none is halaal, there are coffee shops for a light pick me up and a few gift shops for souvenirs. The highlight of the bridge though is the pedestrian walkway that gives you a panoramic view of the Gorge. The height obviously makes it daunting for some however there is a charming observation deck from the petrol station. With this being just the entrance of this scenic wonder, any nature lover can only assume what this little town will behold.