As international travels continue especially during the summer on an island holiday, refreshing experience such as going playing with water or going to the waterpark to cool things down is a must-do activity. Here's an in-depth story and experience of one of our writers regarding her visit to the latest and biggest attraction in Thailand, the Andamanda Water Park in Phuket!

1. How to get there and what can you expect An island holiday without a water park can be described as nothing less than incomplete.

Andamanda is a newly opened water park about 20 minutes from Patong and Phuket so basically smack right in the middle of both. There are a number of ways to get to the park by both tuk-tuk or taxi and when returning home you will find amply taxis waiting outside the resort. Still brand new the park is in pristine shape with all the amenities in excellent condition. The park which sports an authentic Thai design and is tailored around Thai legend is a fun day out but the park only opens at 10 am and closes at 6 pm according to the website's information so you best be there early to fully enjoy this world-class park. 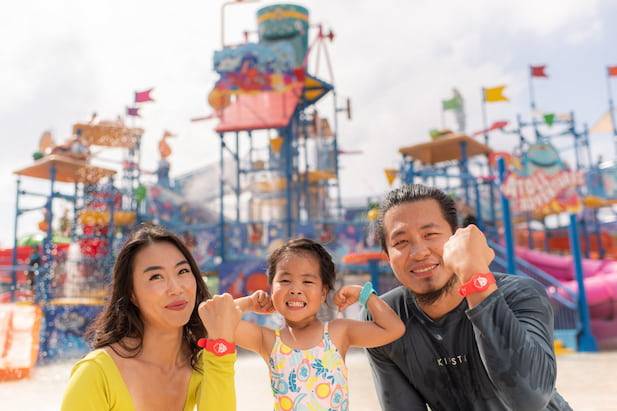 The park is currently running a promotion so the price is halved therefore it is extremely reasonable for the rides that it offers. The tickets range according to height so irrespective of whether you intend on riding or not you will have to pay the full ticket price if you are over 122cm. The park is a completely cashless zone and everything works with a wristband given upon entry. One member of the family will activate just one band which will allow you access to a locker where money can be loaded. This band will be used to purchase everything in the park including water and private family villas. A nice touch is the complimentary towel given at the entrance however you may bring your own towels or lend towels on site. At the entrance, you will also find a gift shop and an array of locker and change rooms are available. A wonderfully magical feature is the dragon that comes alive upon entry with its realistic sound effects and the cloud of smoke that it breathes out. 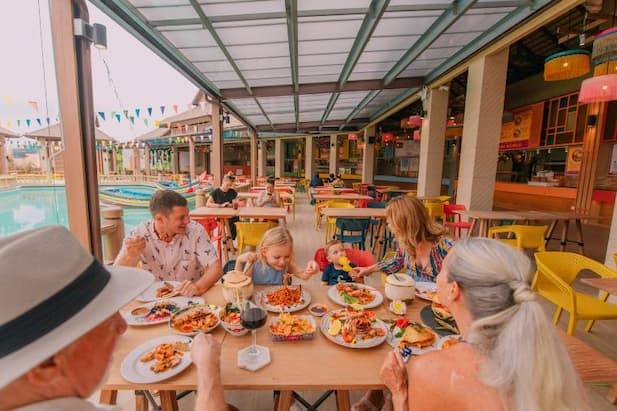 The park is extremely practical and well suited for families. There are two food courts and a number of kiosks around the park to purchase snacks from and although the food menu is a bit limited and consists mostly of Thai cuisine, it will suffice for those munchies you will definitely experience after your pool time. Again, the workers say that the food is halal but there is no sign or certification to prove this. Due to the park still being new no cost is being spared and even the sandwich wrappers are personalized with the park’s logo and name. There is also ample seating around the park and at 2000 Baht per private suite which is technically still visible to everyone around you, the free chairs are a far more economical option. There are sun shades and although they will protect you from the sun, the rain still seeps through which is something we experienced during an afternoon shower. However, despite the rain, the rides remain open unless there is a severe storm accompanied by thunder. Another plus of the park is the number of washrooms that are littered throughout the park and again with kids who will be more invested in playing this is a major plus. A slight disappointment though was the WIFI that could only be accessed by physically going to the admin office to get the code which is something almost unheard of in today's day and age. The park is divided into 5 sections according to thrill level and there is literally something for everyone. There are rides such as the Dragon Drop for the adrenaline junkies, Andaman Bay for those who prefer a soak in the wave pool, and Coral World for the kids which will most certainly leave the entire family engaged for the entire day. The park also has the longest lazy river in Southern Asia and a wonderful feature of the park is that there are visible lifeguards everywhere. Along the Lazy River, a lifeguard is stationed after every meter of water and every slide in the kiddies section has a guard monitoring the slide so you can safely leave your child to play and can sit on the chairs along the play area without the fear of them being injured.

Although I must admit that I have seen better wave pools around the world the overall features of the park are extremely impressive and can easily if not definitely surpass some of the major water parks in Dubai.

Again because of time we were unable to visit all the parks but another two well-known parks are splash world which is very similar to Andamanda, but Blue Tree has a very interesting water park concept that includes cliff jumping and a zip line and is far cheaper than the other two parks.

With the gorgeous humid weather, a water park is a must-see during your visit to Phuket.