Pangkor Island, Malaysia: 6 Destination Spots You Should Not Miss

Malaysia is a country with many exciting tourist attractions. You could, for example, visit Redang Island, The Habitat Penang Hill, Genting Highlands, or Gunung Mulu National Park.

We will take you on an adventure to the island of Pangkor, located off the Pantai Perak in the peninsula of Malaysia.

This beautiful island in Perak, Malaysia, offers visitors a lot of beauty that, of course, puts their minds at ease after struggling with daily tasks.

From Kuala Lumpur, we would have to travel four hours to Pangkor Island, 90 kilometers from Ipoh City. Prior to crossing to Pangkor Island, you can park your car in the harbor. In the port, there is a daily parking fee of about RM15. Afterward, you cross using a ferry, which costs RM15 for adults and RM5 for children. This price applies to local people and foreign tourists.

Prior to experiencing this island's natural beauty, one would be wise to learn a little something about the history of this island, which is only eight square kilometers in size and is populated by about 25,000 people. Pangkor Island was historically a haven for local fishermen, traders, and pirates. The Dutch built a fort on Pangkor Island in the 17th century. The goal is to supervise the tin trade in this island region. Pangkor Island has now become a popular tourist destination in the neighboring country.

Let's talk about the tourist attractions on this island. 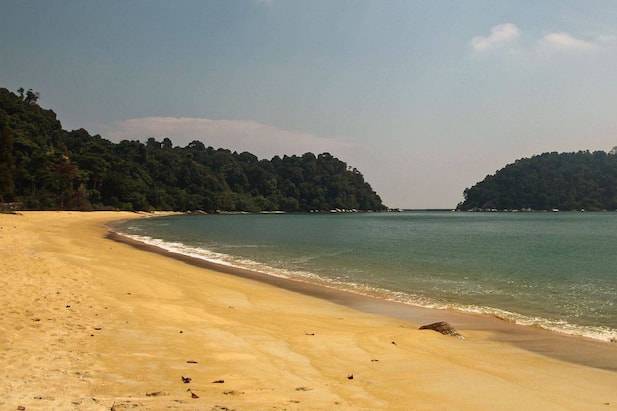 The best place to watch the sunset on Pangkor Island is Pasir Bogak Beach. The site also offers banana boat games. You can take a Scuba Diving, surfing, snorkeling, and fishing package if you want to explore the underwater world.

You can also enjoy the beauty of Pasir Bogak Beach while riding a horse through the forest.

Pasir Bogak Beach extends more and more over the course of the night. On this beach, there are dozens of restaurants. Therefore, if you want to spend the night with your family while listening to the waves, Pasir Bogak Beach is the best choice. 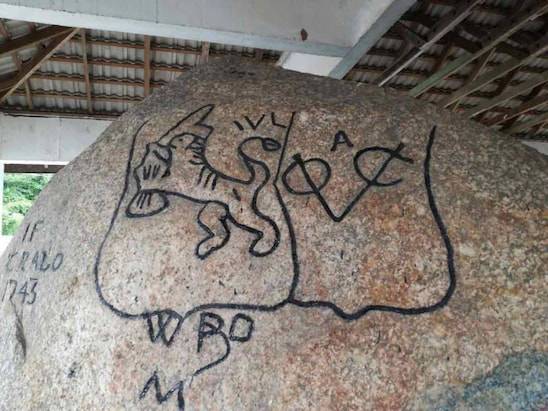 Historical relic Batu Bersurat has a remarkable tale to tell. It is located in Kampung Teluk Gedung and the stone size is very large. It is about 10.7 meters long, 4.6 meters wide, and 4.3 meters high.

Residents believe that this stone is a living stone that was once small and gradually grew due to rainwater.

Tiger Rock is also called Batu Bersurat because it depicts a tiger attacking a small child. The painting is available in many translations. Many believe the painting was drawn by Dutch soldiers to commemorate the death of a young Dutch boy who was lost playing around a rock when he was attacked by wild animals.

Alternatively, the child may have been kidnapped by high-ranking Malays as revenge against the Dutch. During an army search for the child, the people claimed that the child was pounced on by a tiger.

Several people have translated this picture differently. According to reports, the carving shows a lion with a sword and bow, not a tiger. The lion is the symbol of the Dutch state, and the army referred to it as a sign that the Dutch were once on Pangkor Island.

The Dutch state symbol is also clearly visible on the line forming the frame of the picture. An engraving beside the lion shows the VOC logo, which was a Dutch trading firm based in the East Indies that was founded in 1602. Over the VOC symbol, the letter A represents the capital city of the Netherlands, namely Amsterdam.

A roof covers the inscription of Batu Bersurat. The painting has to be protected from erosion and fading due to climate change. 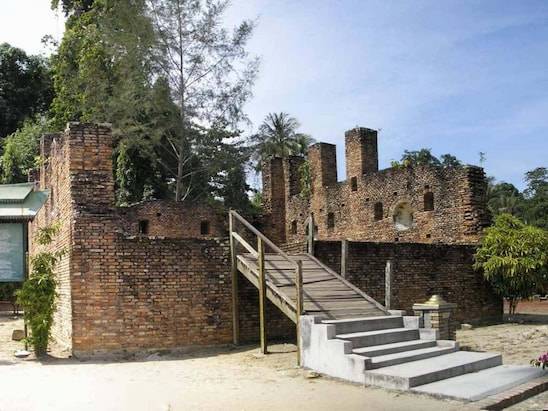 An old city more than 300 years old is not far from Batu Bersurat. Dutch Fort is the name of the city. It was the strongest base for the Dutch troops to defend themselves against pirates and the Malay natives.

Additionally, this city was used to store tin ore produced by the Negeri Perak's mining industry. The fort was built to stockpile tin ore, which was monopolized by the Dutch. The fort was originally built of wood. Between 1743 and 1748, bricks were used in the renovation.

In 1784, the Dutch abandoned the fort and built a new tin ore warehouse on the banks of the Perak River.

Previously, this fort had been neglected. The building was damaged in various places. Until recently, the local government conserved the fort and used it as a tourist attraction. The Dutch Fort Tour has also been made as attractive as possible without losing the essence of the existing history.

In addition to green grass, the area has been transformed by building souvenir shops and stalls selling drinks and snacks. 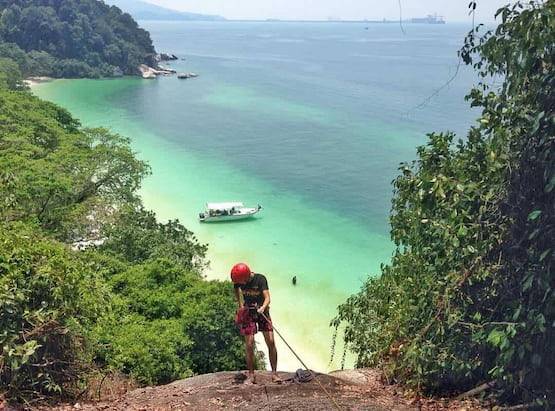 Segadas Bay lies in a protected forest that can be reached on foot by walking for 30 to 45 minutes from Teluk Gedung Village.

Students from abroad and local Malaysian students alike enjoy camping at Segadas Bay. Those who camp here can enjoy the vast expanse of the blue and green sea, along with the clean water.

Segadas Bay is referred to as a "virgin beach" due to its beauty.

We ask you to be careful if you camp at Segadas Bay. Be sure to take good care of your belongings, especially your groceries. As there are many monkeys in this location who like to steal food from the tourists. There have been several incidents of theft at the campsite, so it is highly recommended that you do not bring valuables such as jewelry.

When going camping, always keep an eye on the weather as well. If the weather isn't favorable, don't force your group to camp. Strong winds, heavy rains, and lightning are frequent in this location. 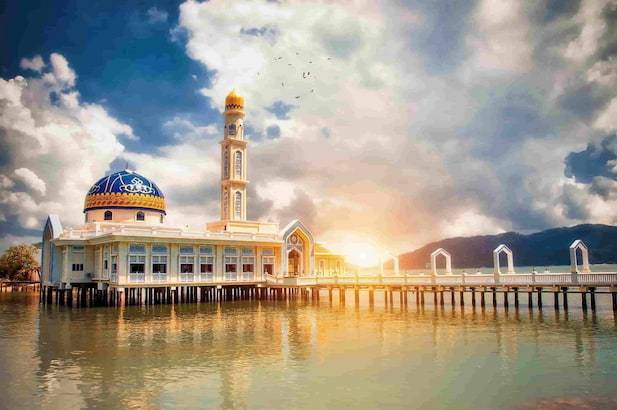 The Floating Mosque of Pangkor or also known as the Masjid Al-Badr Seribu Selawat opened its doors in 2017 and has been regarded as one of the newest monuments of Pangkor Island.

The name Seribu Selawat which means a thousand prayers refers to the number of prayers that have been carved on the pillars and walls of the Floating Mosque. Masjid Al-Badr Seribu Selawat is also the first floating mosque in the state of Perak, Malaysia.

The Floating Mosque of Pangkor or the Masjid Al-Badr Seribu Selawat is located in Kampung Teluk Gedung and is a must visit when visiting Pangkor Island.

Being a multiracial and multicultural country and island, visiting the historic temples on the island might be a great way to learn more about the locals of Pangkor island. There are two temples on Pangkor Island - Kaliamman and Fu Lin Kong Temple. Kaliamman Temple is situated in Sungai Pinang Kecil Village on Pangkor Island. While the Fu Lin Kong Temple is located just below Pangkor Hill.

There is a really stunning view of Fu Ling Kong Temple, making it a very attractive place to visit. This temple has a fish pond and turtle pond with a small bridge, which is one of the attractions. There's even a replica of the Great Wall of China.

Getting Around Pangkor Island 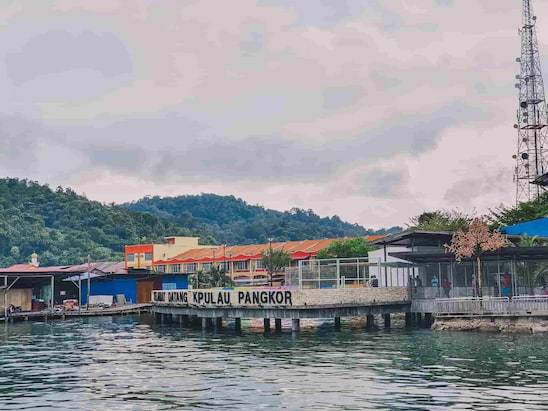 This pink minivan might be a good option if you've got a group on a tight budget. And if you can drive, you're best off renting a car.

When you're tired of walking, you can spend the night on Pangkor Island. There are many inns on this island. From ordinary hotels to star hotels. Prices vary as well, of course.