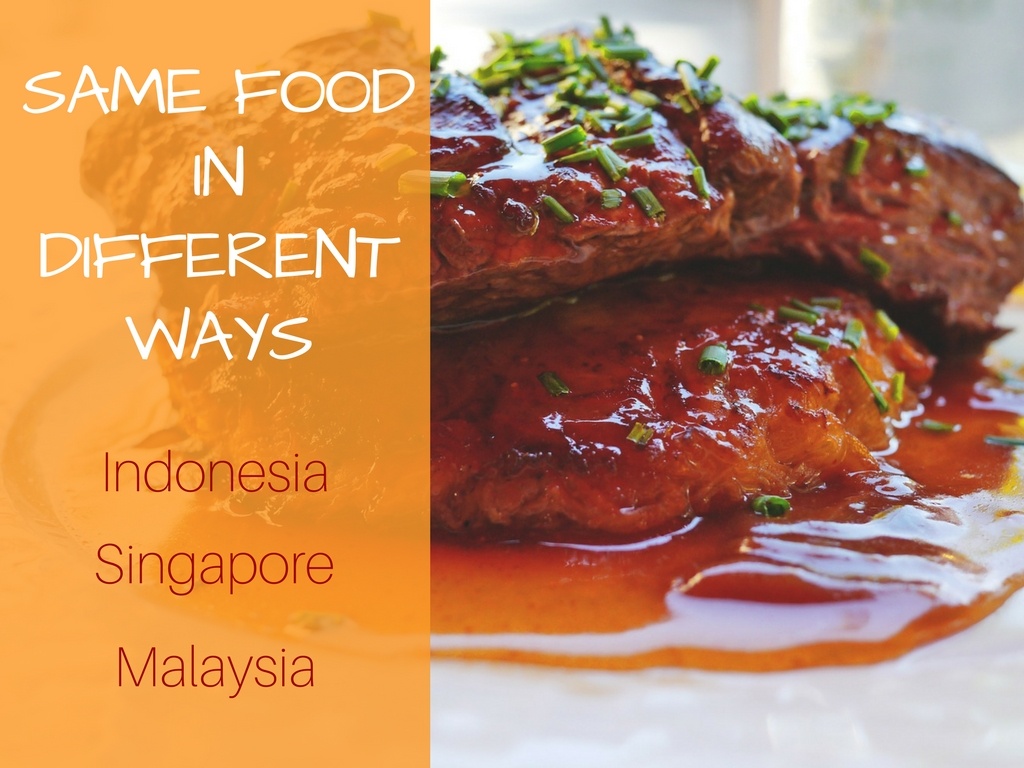 Indonesia has some of the most intricately flavoured food in the world. But beyond its borders lie countries with very similar culture, and very similar tastes. There are some Indonesian dishes that pass off under other names in Singapore and Malaysia, and yet others that carry the same title have subtle differences in taste.

Beef rendang was voted number 1 in the World's 50 Most Delicious Foods (Readers' Pick) by CNN, and that popularity has leaked out into its neighbouring countries.

Originally from the Minangkabau ethnic group in Indonesia, this “West Sumatran caramelised beef curry” as it is described is served in Singapore and Malaysia too, with slight differences. Malaysian rendang has many variations and is generally lighter in colour and taste as it is cooked for a shorter amount of time. It remains a wet curry as the coconut milk is not allowed to evaporate.

Another popular Indonesian favourite, Satay, is common elsewhere too.

Grilled skewers are topped with spicy peanut sauce and generally served with ketupat, cucumber and onions in Singapore. Malaysia, being one of the originators of this dish, has a plethora of meats and sauces to choose from. Exotic meats like venison, rabbit, fish, and even gizzard and liver can be found along with the basic chicken or beef. Watch out for the ones made with pork though! It is served with different sauces in different places – sweet, dark, chilli, peanut, and even chilli paste. Some street vendors have big pots of boiling water that customers can dip into and cook the skewers themselves.

Nasi Goreng is sometimes known as the national dish of Indonesia, but is prevalent in Malaysian and Singaporean households too.

There are many variations of the dish including with anchovies or leftover fish, fried beef, omelette, seafood, or sambal amongst others. Since there is a significant Chinese community in Malaysia and Singapore though, the Chinese influence is most common.

Ayam goreng, lit. fried chicken, is an aromatic and flavourful fried chicken that differs from the American style by the lack of batter.

The chicken is marinated with a mix of spices to soak up the flavour and then deep fried in coconut oil. What varies amongst regions is the spice mixture – the local favourites dominating the flavour.

Even though Laksa originated in Singapore and Malaysia, various recipes have become popular in Indonesia too.

The spicy noodle soup has a base of either rich and spicy coconut milk or sour tamarind, and consists of rice noodle or rice vermicelli, with chicken, prawn or fish. While some Malaysian Laksas are made with thick, flat rice flour noodles in a rich curry soup, Singaporean Laksa has the soup cut into smaller pieces so that the entire dish can be eaten with just a spoon – no fork or chopsticks. Indonesia has a plethora of Laksas to choose from, but the most famous is Laksa Bogor, which has a distinct and earthy nutty flavour from oncom. The traditional version has shredded chicken as well as ground dried prawn, but the cheaper street versions are sometimes entirely vegetarian.

Nasi Padang is Padang steamed rice served with a buffet of dishes that originated in Padang West Sumatra, Indonesia.

The typical window display makes Padang restaurants easily distinguishable and can be found in Indonesia, Singapore and Malaysia. Ranging from vegetarian dishes to fish, chicken, beef, and all parts of the cow, Nasi Padang is an at-your-table, by-the-plate buffet. Customers only pay for the dishes they have picked out of this array. Even though this dish is native to Indonesia, it is listed as one of the foods that Singaporeans cannot live without.