Saudi Arabia to Resume Umrah for Overseas Pilgrims on 10 August 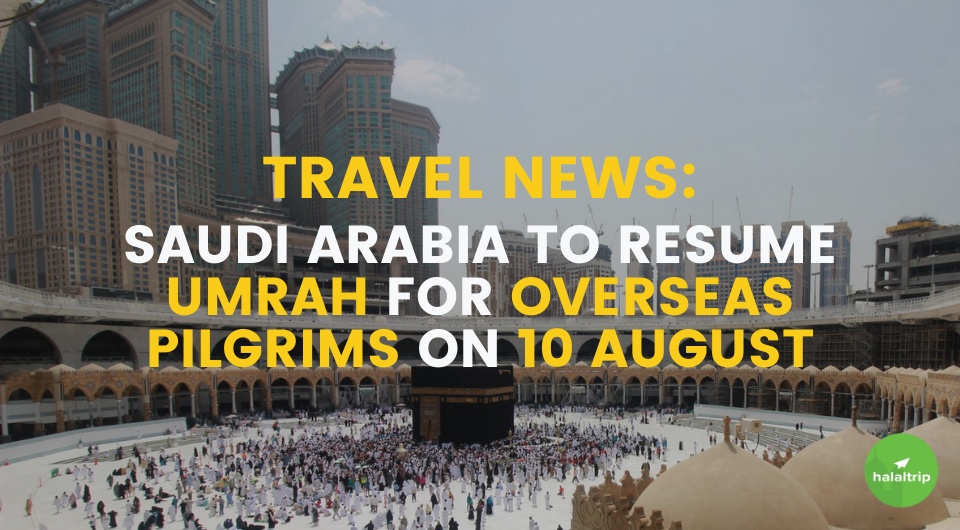 According to multiple sources, Saudi Arabia is slated to reopen and resume Umrah services for those abroad from 10 August 2021. Based on state press agency SPA (Saudi Press Agency), as reported by Gulf News, Arab News, and, other news outlets.

Disclaimer: Please check with the respective authorities for more information on the requirements and arrangements pertaining to this news.

Hani Ali Al-Amiri, a member of Saudi Arabia's Committee for Hajj and Umrah and Hotels Committee in Mecca told Al Arabiya; more than 6,000 Umrah agencies and about 30 websites and platforms for global reservations are available for foreign pilgrims wishing to book their Umrah. only those fully vaccinated can apply for an Umrah visa.

No official statements on the eligibility and requirement have been released officially by the ministries of Saudi Arabia but according to Haramain Sharifain on Twitter, pilgrims will be required to quarantine for 14 days in a third country before arriving in the Kingdom.

With mandatory requirements of being fully vaccinated against COVID-19 with Pfizer, Moderna, Astrazeneca, or Johnson & Johnson.

This arrangement is only open to those above the ages of 18 and they will have to have arrived in the Kingdom via an accredited Umrah Agency by Saudi Arabia's Ministry of Hajj and Umrah.

This news comes after a successful Hajj season 1442 Hijri (2021) that has just passed, according to the Acting Minister of Hajj and Umrah, Dr. Issam bin Saad bin Saeed. According to SPA, he affirmed "Thanks to Allah Almighty and His Grace, the generous care and directives of the wise leadership as well as the cooperation among all parties working in the service of pilgrims and the provision of the health, security and technical services system for the pilgrims, the success of this year's Hajj season has been achieved.".

As reported on Gulf News, the Head of the General Presidency for Affairs of the Two Holy Mosques, Abdul Rahman Al Sudais, will be overseeing preparations for receiving the Umrah pilgrims at the Grand Mosque in Mecca.