Specialty Foods of Indonesia: A Culinary Journey with Indonesian Food

Each country has different types of food with their characteristics and uniqueness, yet halal and surely Muslim-friendly. It has a distinctive color and shape. Some of these foods are well-known worldwide because those meals have a pleasure that is second to none.

Indonesia is referred to as a culinary paradise. This country serves a variety of tasty cuisine on each island. Therefore, it is not surprising that some Indonesian specialties are well known for international tourists due to their mouthwatering meals.

Here are some of the best halal food recommendations in Indonesia. You shouldn't miss it when you arrive in the largest country in the Southeast Asia region.

Rendang is one of the most well-known foods in the world. This traditional cuisine is originating from the West Sumatra province. It has also been named the most delicious food by CNN International, above sushi, a Japanese specialty.

The drooling rendang is produced from the process of cooking at low temperatures for a long time. The main ingredient used in cooking rendang is beef mixed with coconut milk, chili, and spices.

The time factor is a crucial part when cooking this authentic West Sumatran dish. At least you need about four hours to cook the rendang until it is absorbed and tender.

Some people cook for more than four hours to produce drier rendang. Rendang is usually served with warm white rice. So savory and delicious makes this food made it into the list of the most delicious foods in the world. 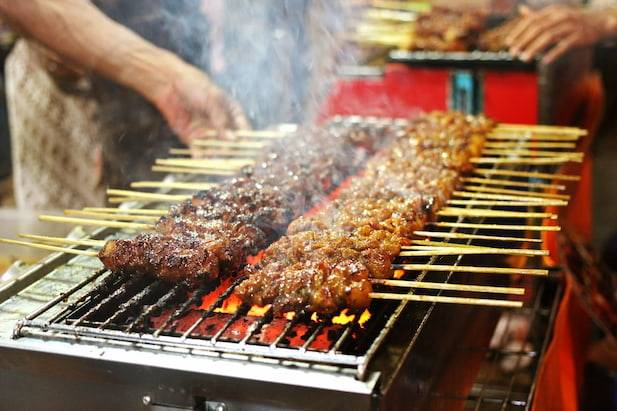 Sate or Satay is one of the typical Indonesian culinary delights recognized with its yummy taste. The food, which is served using some ingredients of mutton, beef, and chicken, has delicious and irresistible.

Those meats such as chicken, beef, or mutton are cut into small pieces.

Then pierced with a stick, grilled using wood charcoal coals. And for sure, don't forget the delish peanut sauce!

It is very popular among local and international tourists. Sate has made it into the list of the world's most delicious foods, according to CNN World's Best Foods 2017.

It has several times been named the most delicious food in the world. You can find this typical Indonesian food in all corners of Indonesia.

Fried rice is usually cooked with various spices, such as shallots, garlic, sweet soy sauce, tamarind, and other spices. As time goes by, fried rice has developed with many flavors, including egg fried rice, salted fish, chicken, and many more.

In today's era, fried rice is served with a variety of toppings and many choices. It is your savior for your hungry tummy if you could not consume other Indonesian dishes.

It is a must-try traditional dish when you visit Yogyakarta.

The savory and sweet taste makes this legendary food very popular with all circles. It has also been known to the world.

The main ingredients for making Gudeg generally use young jackfruit. Even so, now many find Gudeg with other elements such as mangos, mushrooms, or snake fruit.

At the time of serving, usually, Gudeg is added with white rice, eggs, and chicken meat. Besides having a delicious taste, the price for a portion of Gudeg is affordable. 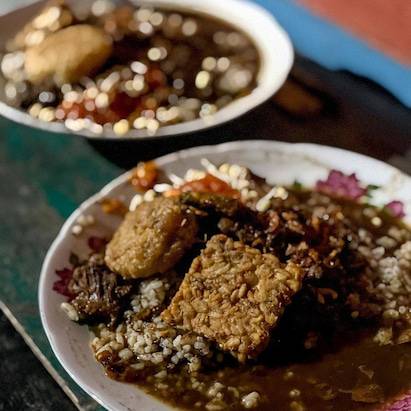 The other typical Indonesian food is Rawon that can be found easily in the whole East Java province, particularly in Surabaya as the capital city of the province.

It is a type of black-colored meat soup with a mixture of special spices using pangium.

Pangium must be boiled and soaked in ashes for one month before start cooking Rawon.

It is to ferment the freshly picked pangium poison. Other spices used are ginger, candlenut, turmeric, red chili, and salt. The meat is boiled with spices until cooked, then served with a plate of warm rice.

Everyone will crave for more once tries Rawon for the first time. Our mouth will be pampered with the taste of peanut, a savory blend of spices, and meat.

Not only that, but Rawon also had the chance to achieve the best soup dish in Asia.

Pempek is a snack originating from Palembang, South Sumatra province. This snack is made from finely ground fish dough with tapioca flour.

The aim is to add elasticity and texture to Pempek so that it feels delicious when eaten.

These various types of Pempek will later be shaped variously based on the ingredients. For example, Pempek Kapal Selam, which contains eggs wrapped in dough.

While Pempek Kulit is added with skin so it will have better fish flavor.

Pempek can be fried until crispy and served with a Cuko sauce: a vinegar-based that tastes sour, sweet and spicy.

Mie Aceh or Acehnese Noodle is a cuisine with a thicker texture than most noodles, containing sliced meat and special, strong spices.

Aceh noodles originate in the Aceh region, Nanggroe Aceh Darussalam, in the westernmost province of Indonesia.

Mie Aceh itself consists of three types, namely, fried, boiled, or sauteed with each having its own distinctive taste. For topping choices, you can choose to be served with beef, crab, shrimp, or squid. 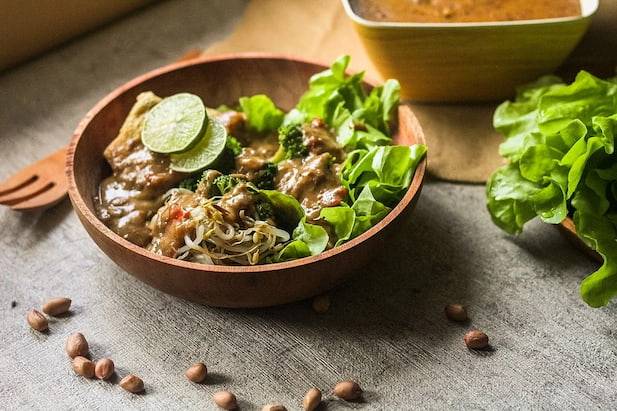 Gado Gado is an Indonesian salad made from a variety of boiled ingredients including vegetables, potatoes, tempeh, tofu, and eggs, then mashed with peanut sauce and spices mixed together.

In reality, this menu is quite popular in Australia. Quite a few Indonesian restaurants in the land of kangaroos sell this menu, which is quite in demand. Not only Indonesians live there, but also indigenous Australians.

Gado Gado is quite healthy because it does not contain any meat, however, it is still delicious.

Gado Gado is a food made from diamond-shaped steamed rice, tofu, bean sprouts, and noodles flavored with peanut sauce.

Ketoprak originates from Jakarta and can be bought at roadside food stalls.

There are still several differences between Ketoprak and Gado Gado despite some similar ingredients.

Ketoprak is served with crackers, fried onions, soy sauce, and boiled eggs. It is also a vegetarian dish because it doesn't contain meat. And since it is so cheap, it can become your favorite Indonesian dish.

Traditionally Nasi Liwet comes from Solo, Central Java province. You will find Nasi Liwet in many parts of the city in the morning and evening.

Nasi Liwet is popular on the roadside as well, so you can feel the atmosphere of Solo city while eating Nasi Liwet.

It is rice cooked with coconut milk and chicken broth, flavored with lemongrass and bay leaves.

The usual components of Nasi Liwet are chicken, eggs, and fried chili sauce.

Grabbing a bite of the rice and experiencing the spiciness of the fried sambal will be an enjoyable experience. 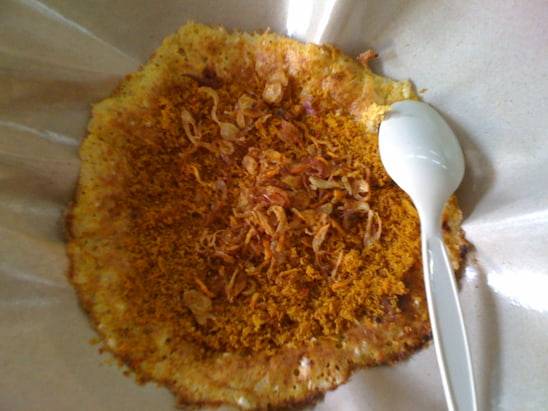 In this street food, you will find typical Indonesian cuisine associated with Betawi culture.

You can easily find Kerak Telor in Jakarta, especially in areas accessible to tourists.

A Kerak Telor is made up of sticky rice and eggs fried as pancakes or omelets, then sprinkled with fried grated coconut and shallots.

You can make Kerak Telor by cooking a handful of sticky rice in a charcoal skillet after it has been soaked. After the eggs have been inserted and cooked enough, you just have to flip the egg crust and eat.

There is no better way to experience Indonesian cuisine than to eat Kerak Telor. It is inexpensive, delicious, and you will never be curious about it again.

These Indonesian specialties are worth trying. These foods are also all halal-based, so you should not hesitate to try them and decide which foods are your family's favorites. One more thing - don't forget to take some photos of those meals, upload them in your feed, and tag @HalalTrip!