Chinese food is always associated with lard-based dishes. We are not allowed to consume lard because we are Muslims. Meanwhile, Sulaiman Han (48), who was born in Xi'an, one of the provinces of the People's Republic of China, offers delicacies that you should not miss while in Indonesia's capital city Jakarta. 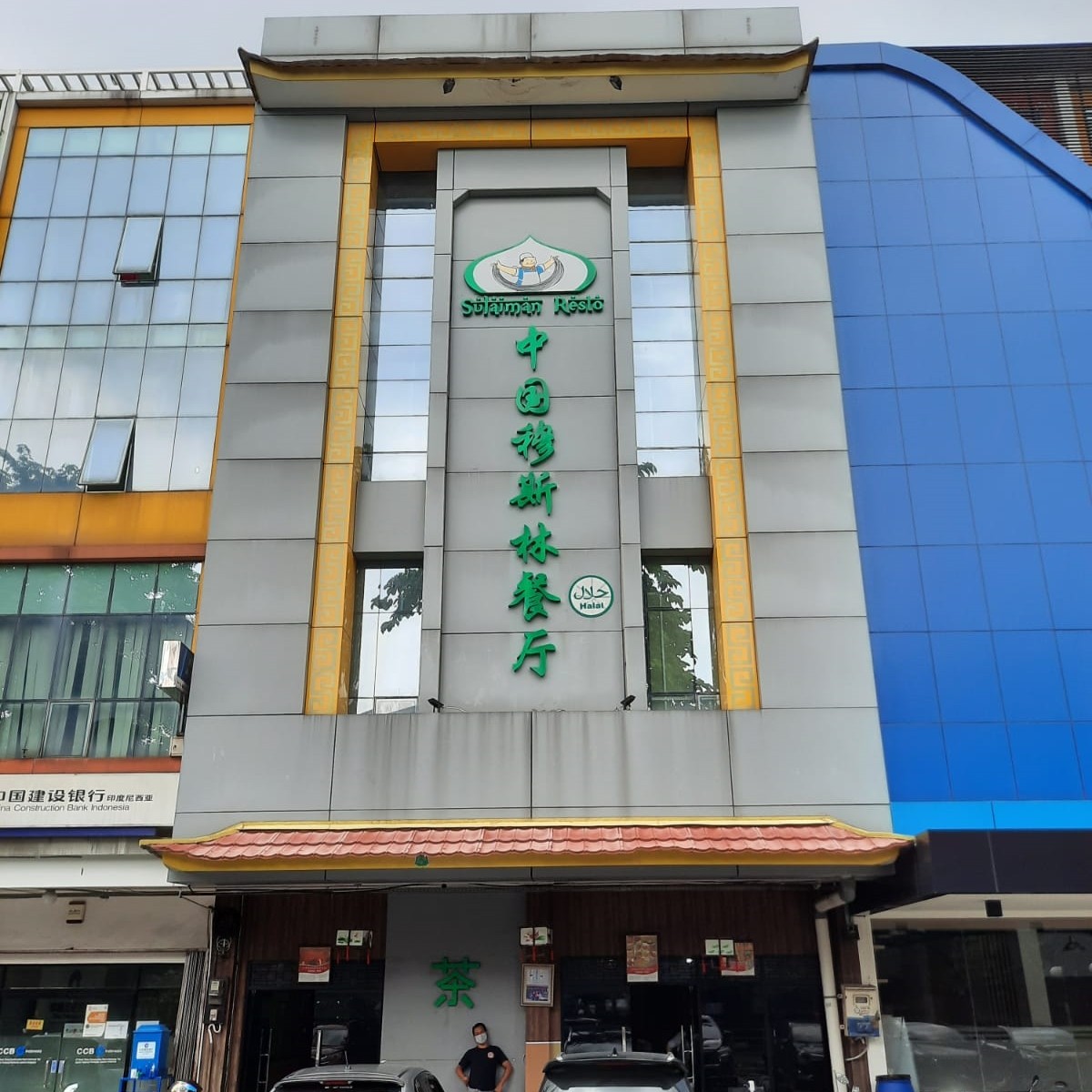 Sulaiman Restaurant, according to Han Yuzhou, the Chinese name for Sulaiman Han, has been open in Jakarta since 2011. It is Indonesia's first restaurant with an Uyghur-taste menu. In 2011, he arrived in the largest Southeast Asian country as part of a Chinese-Muslim delegation from Shaanxi Province.

"I came here for business with my 26 friends. But I am still the last man standing in Indonesia. My friends were unable to run their businesses here," Han explained to HalalTrip.

Han said that he is very enthusiastic about cooking. He began cooking with his family when he was 18 years old. Because he was born in Xi'an, Shaanxi Province, his cooking style is predominantly Halal, as there are many Chinese Muslims in the area. He is particularly influenced by the Uyghur tastes from Xinjiang, northwest China.

Xi'an cuisine includes a wide range of dishes. According to Han, the main meals in Xi'an are steamed bun, mutton, beef, and various treats. He believes that his cooking style is well-liked by Indonesians because it serves spicy dishes, but he also serves non-spicy meals.

Snippets of the Menu at Sulaiman Restaurant 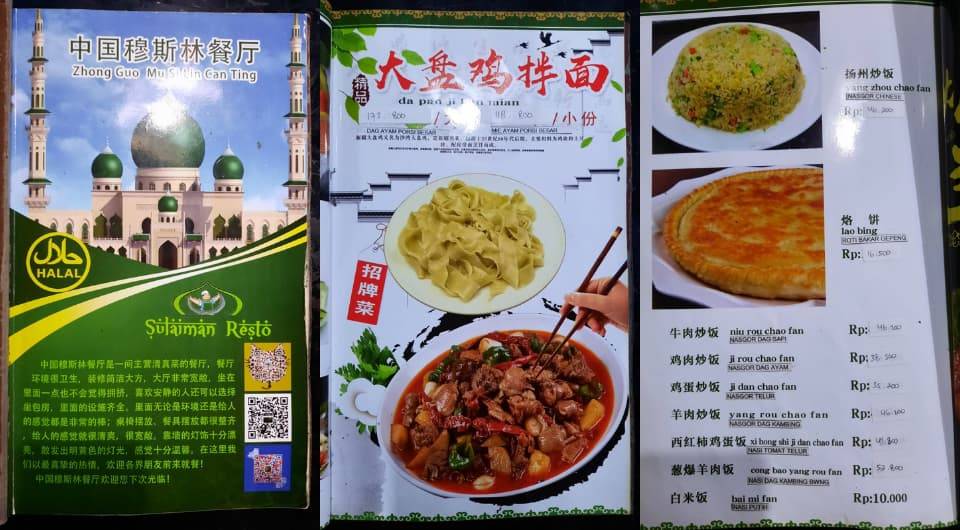 As a result, in 2016, he was able to open at least four representatives in Denpasar, Bali Island, aimed at Chinese tourists, locals, and other international tourists.

“Doing business in Indonesia is really good. I enjoy my life here,” he told HalalTrip recently.

However, the pandemic has devastated his business over the last two years. Prior to the pandemic, he could employ at least 30 people. For the time being, he could only hire 10 staffs to help him run the Chinese Muslim authentic dish restaurant. The worst-case scenario was when he was forced to close four restaurants in Bali due to a lockdown policy. 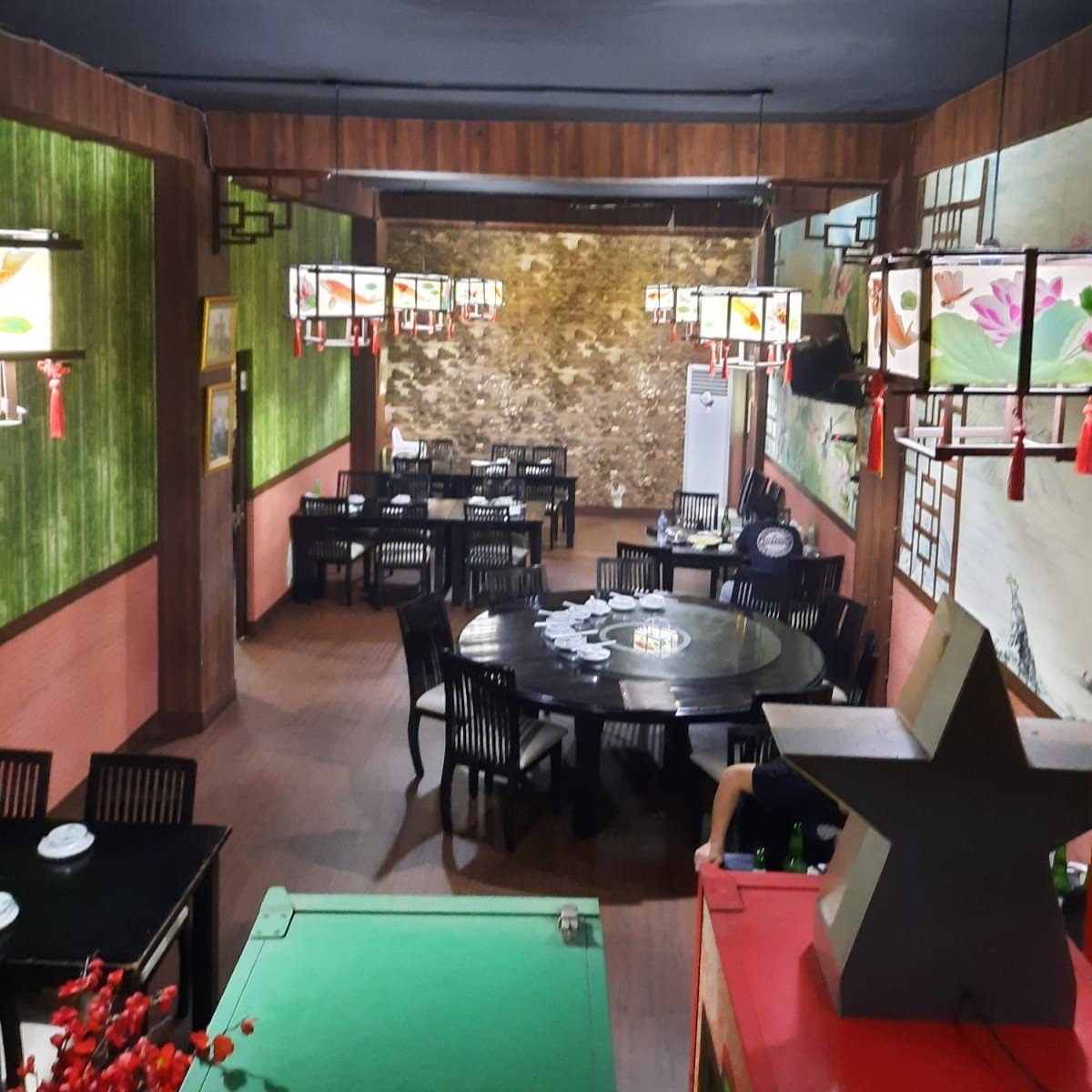 The Sulaiman restaurant must adapt to this difficult time. Han must follow Indonesian law regarding the gathering restriction. Currently, the restaurant can only accept 50% of its maximum capacity for dine-in. It was a different story before COVID-19 arrived in Indonesia in early 2020. After all, his entire staff has been vaccinated. 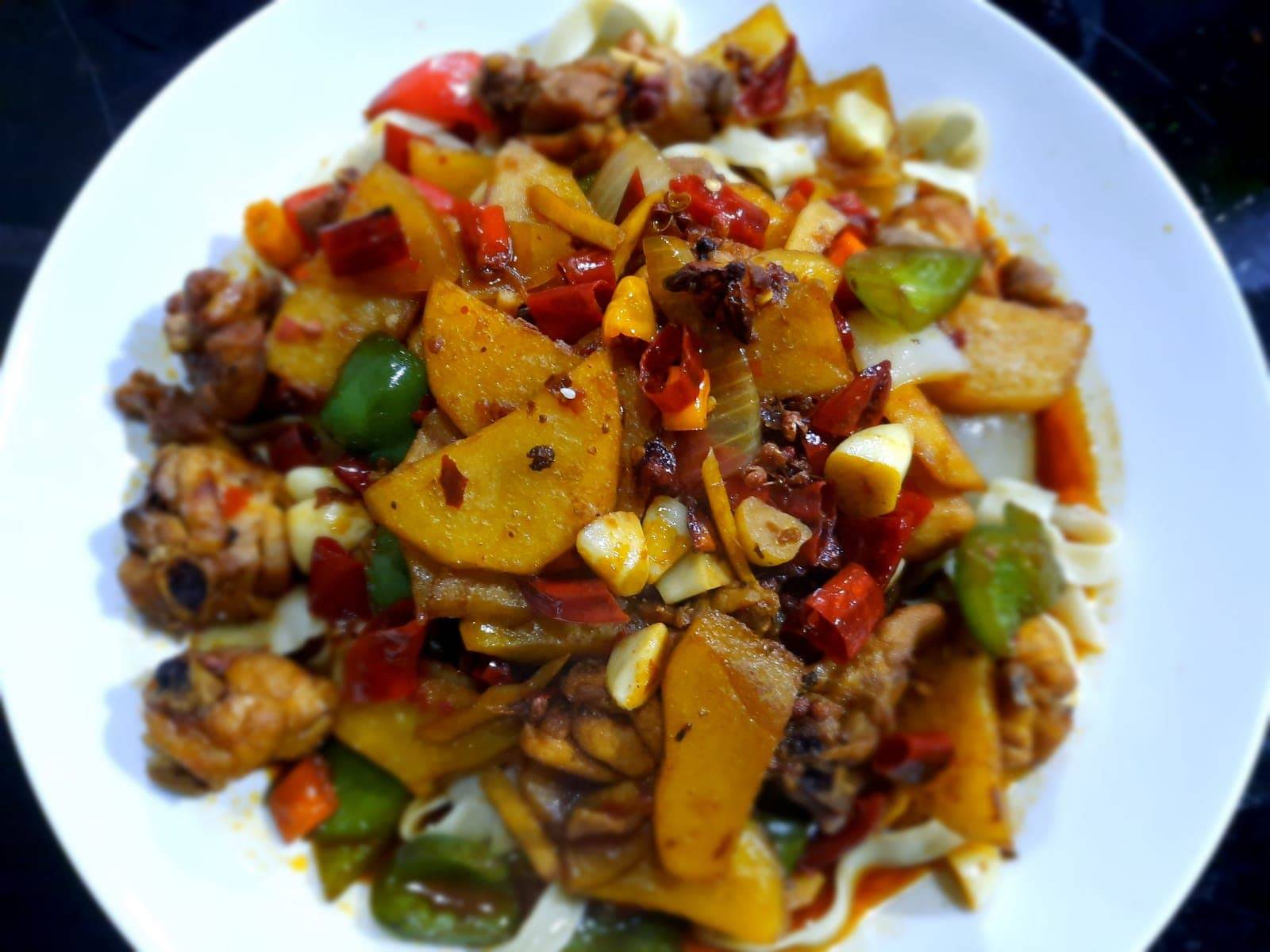 Han advised HalalTrip to try a dish popular among Indonesians. Dan Pan Ji Ban Mian, also known as Chicken Noodle in English, is a Chinese dish. It is available in two sizes: large and small. Certainly, the cost varies. It costs IDR 118,800 (USD 8.27) for the small size, which can be shared by two or three people. The large Dan Pan Ji Ban Mian costs IDR 173,800 and is ideal for a luncheon or dinner for four to five people.

HalalTrip decided on a small size of Dan Pan Ji Ban Mian. When this meal was served to our table, we were completely taken aback. It is a sizable portion for an Indonesian.

It includes a wide noodle that resembles Kway Teow. It's brimming with cut-up chicken pieces and steamed-soft potatoes. The flavor is intense, spicy, and savory! It's loaded with spices like paprika, garlic, chili, pepper, coriander, and sesame seeds.

It's hot and fresh from the kitchen. Han said that every meal in his restaurants is always prepared from scratch. When a customer orders a meal, his staff will prepare it. HalalTrip will have to wait about 30 minutes before trying this Uyghur-style chicken noodle.

Han stated that he buys rice, mutton, or beef from Indonesia. Nonetheless, he imported seasoning from Xi'an to maintain quality because it is not available in Indonesia. 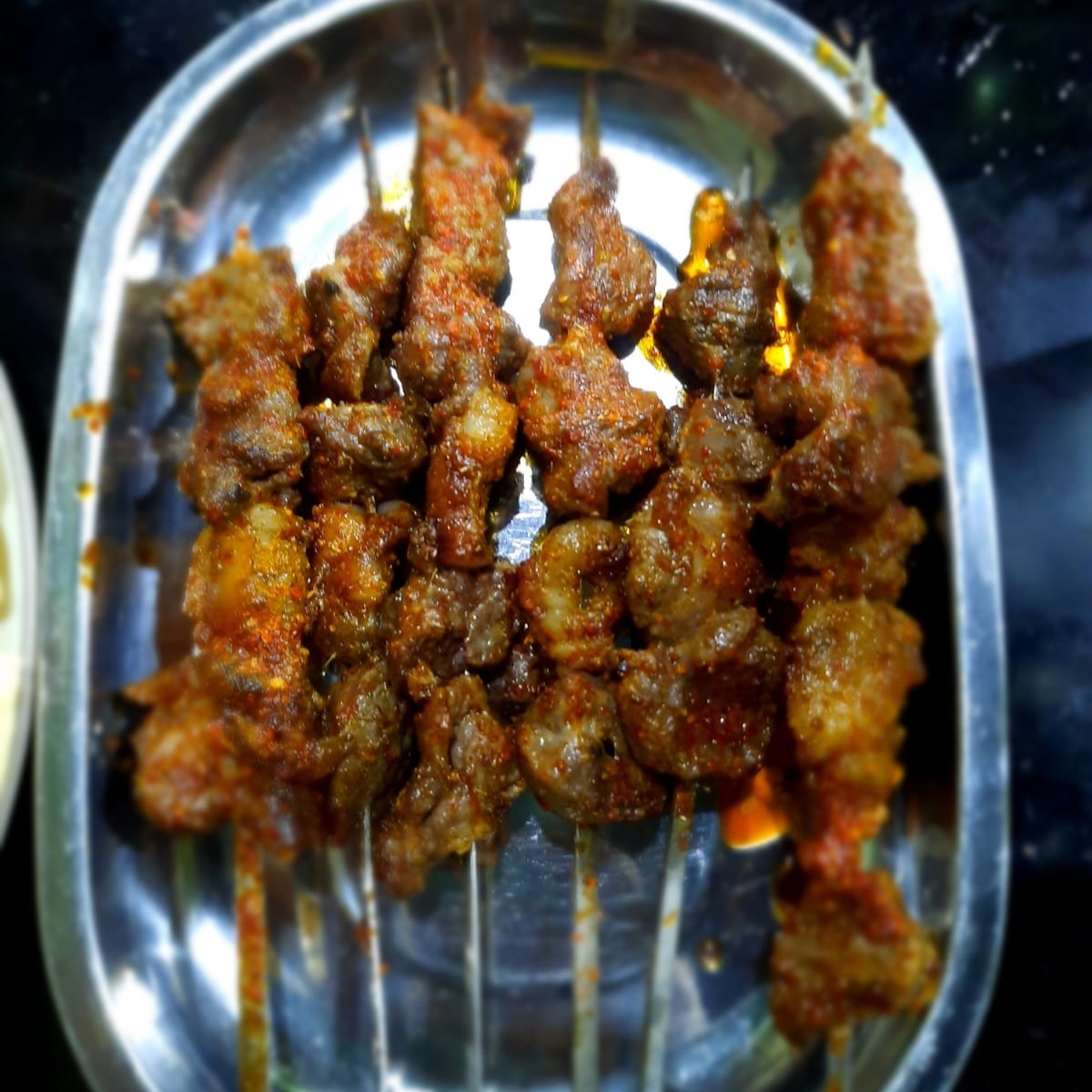 The following menu item we tried was Mutton Satay, which cost IDR 15,000 per piece. HalalTrip was able to observe Han storing his mutton meat in the freezer before grilling it over charcoal. Again, it is quite large for an Indonesian, but it is worth a try.

While grilling the Mutton Satay, Han will add some Xi'an-inspired seasoning. When he grilled our Mutton Satay, it smelled delicious. It does not take as long as Dan Pan Ji Ban Mian to wait.

HalalTrip was blown away by this Uyghur-style mutton satay. It tastes nothing like the typical Indonesian mutton satay, which is topped with sweet soy ketchup or peanut sauce. It has a crunchy outside and a juicy inside, with no pungent odor. Every bite of this Mutton Satay will leave you with a savory and slightly salty aftertaste.

The best part is that the mutton fat is tender and juicy! Trust me on this! HalalTrip placed an order for six pieces of Mutton Satay. It's absolutely enticing. 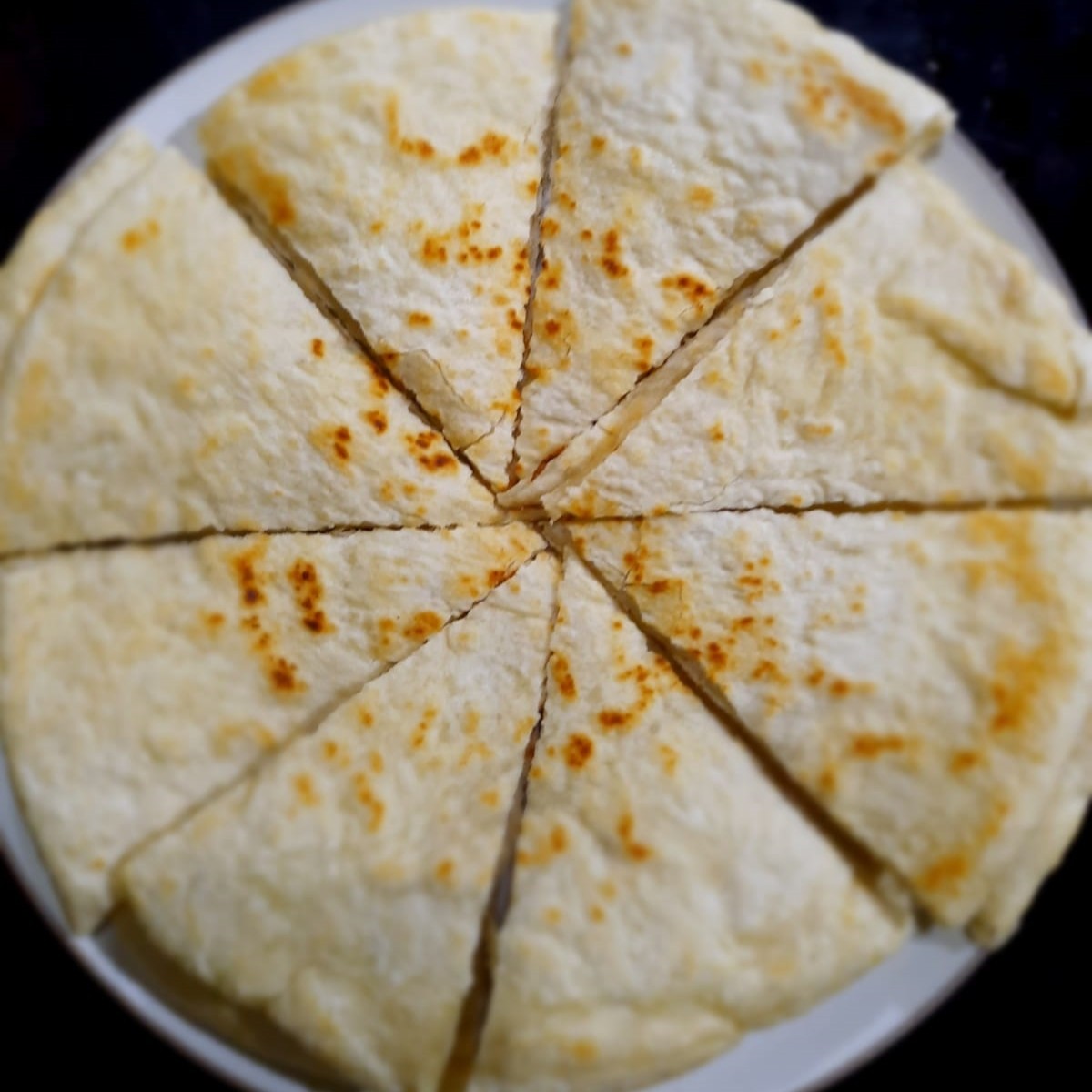 Finally, HalalTrip ordered Lao Bing, also known as Flat Toast in English. The appearance is similar to Indian paratha, but the taste is chewier. It is an excellent choice for making your own kebabs with Mutton Satay as the filling. The Lao Bing costs IDR 16,500 for a plate of eight pieces of delicious bread.

At this restaurant, which is adorned with Chinese ornaments and Arabic calligraphy, we can only order three menus. HalalTrip felt so full! It was a tremendous luncheon!

Han, as a devout Muslim, does not celebrate Chinese New Year. Despite the fact that many Chinese around the world celebrate it on February 1, it is just another day for him. Han, on the other hand, observes Eid-al Fitr or Eid-al Adha.

Han has been raised as a Muslim since he was a child. He prays five times a day and attends Friday prayers at Lautze Mosque. It's a mosque where we might run into a Chinese Muslim or someone who has converted to Islam.

Furthermore, prior to the pandemic, Han always donated once a month to an orphanage in Jakarta. He gives away 2.5 percent of his possessions to people in need.

"I'm overjoyed to be able to donate what I have. Our religion compelled us to do so," Han told HalalTrip.

Han, a businessman, told HalalTrip about his leadership style. It is always difficult to lead a group of people with diverse backgrounds and perspectives. He employs a gentle approach to motivate his employees.

"I told them that laziness is not a good deed, so it is forbidden," Han explained. He described Indonesians as "very friendly and honest people." He hopes that everyone who works in his restaurant is eager to learn, has a strong work ethic, and is open to new technology.

"We are only ordinary humans, not God," Han pointed out. He noted that there is no such thing as a perfect country in the world. Every nation or people has its own flaws. Han, on the other hand, believes that if we work hard and address our weaknesses, we will become stronger. 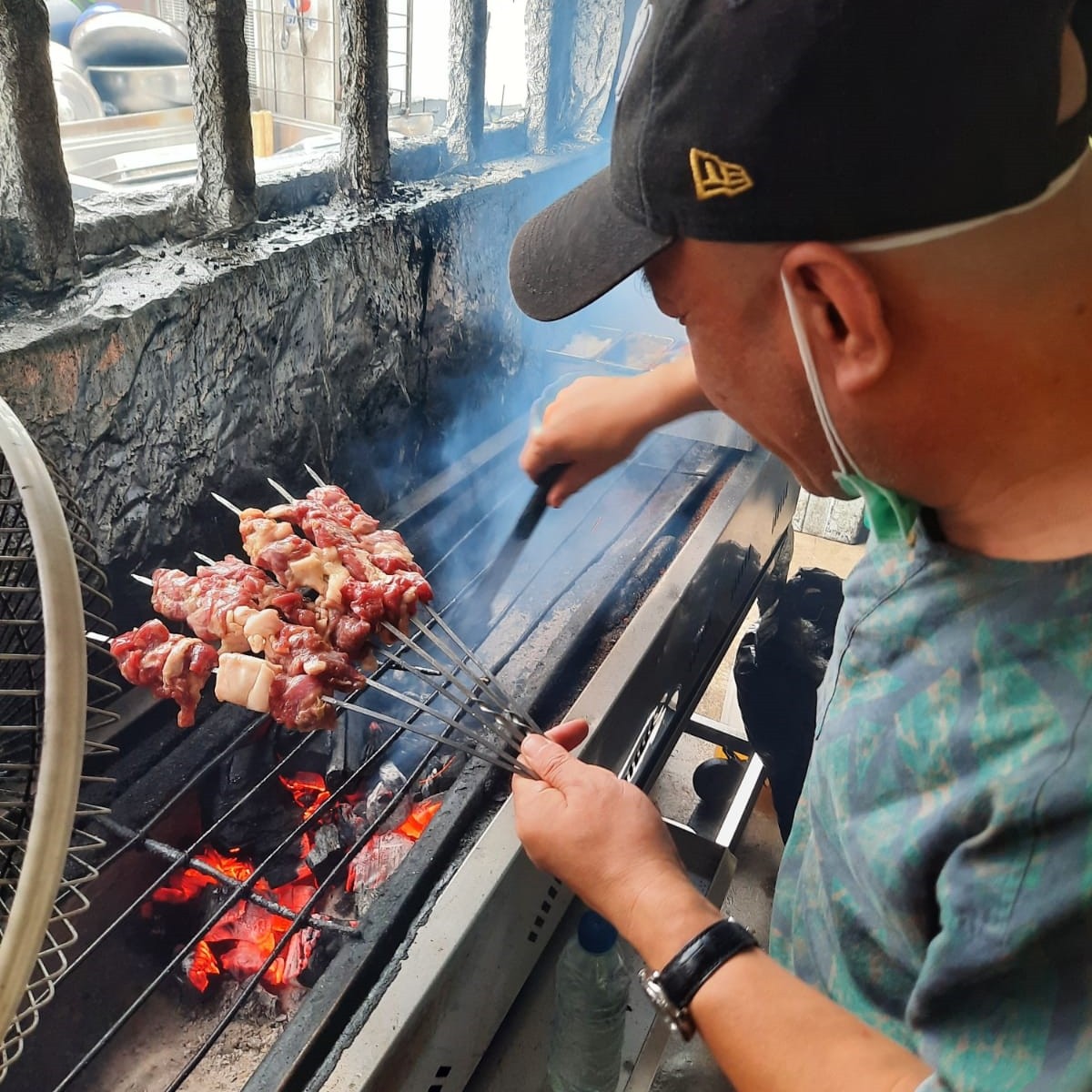 Rendang, Oxtail Soup, Chicken Congee, and, of course, Instant Noodle are among Han's favorite Indonesian dishes. That is why he enjoys living in Indonesia. Nonetheless, he intends to open a second Chinese Indonesian Muslim restaurant in Singapore in April 2022.

He'll name it Narati, a Xinjiang word that means 'Hope.' He also uses the term 'Chinese Indonesian' to describe his new restaurant, which is part of Sulaiman Restaurant and serves the first Uyghur-style dish in Indonesia.

Han is optimistic that his company will be able to recover from the pandemic by 2022. Many of his business plans were halted as a result of the never-ending pandemic.