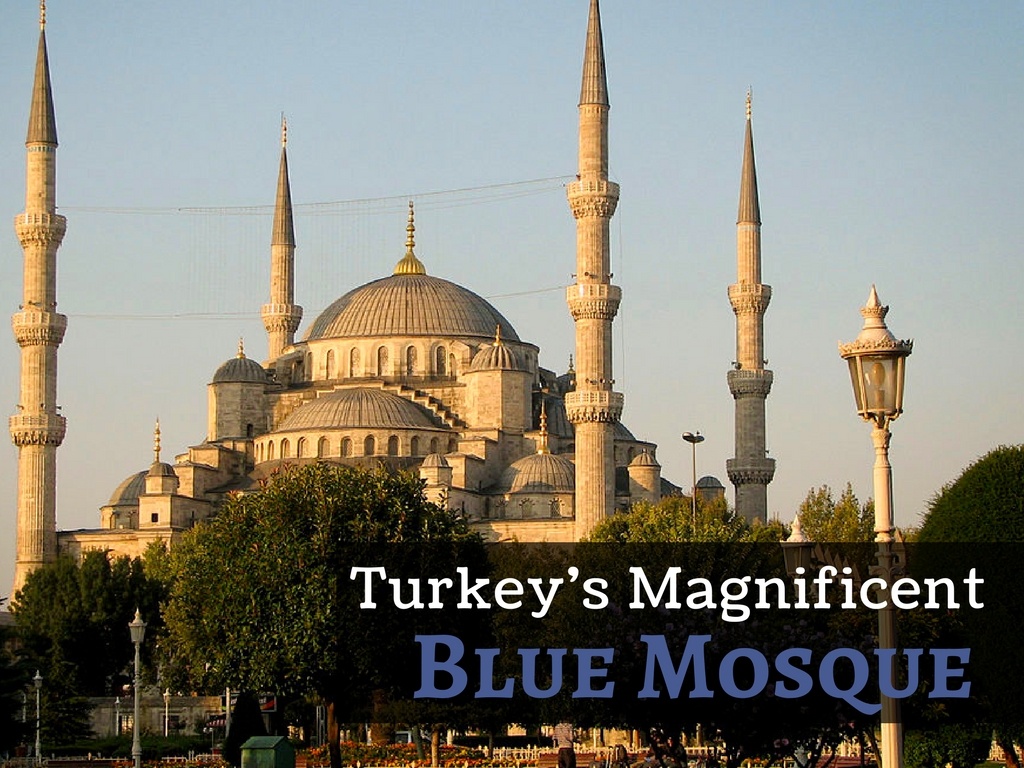 A visit to Turkey would not be complete without a visit to the Sultan Ahmet Mosque located in Istanbul’s Sultan Ahmet Square. Built during the reign of Sultan Ahmet I in the early 17th century, this mosque is also famously known as the Blue Mosque because of the blue tiles used in its interior. The Sultan Ahmet Mosque which still operates as a traditional mosque, also contains the tomb of the founder, a madrasah (an educational institute), and a hospice.

Sultan Ahmet Mosque is considered to be the last great mosque constructed during the Ottoman classical period and combines Byzantine Christian architectural elements with that of traditional Islamic architecture. Another notable feature of the Sultan Ahmet Mosque is the large unified prayer hall crowned by the main dome and an equally spacious courtyard surrounding the mosque.

Every visitor to Turkey will be able to spot the Sultan Ahmet Mosque miles away due to its distinctive six minarets. The only mosque to have so many minarets at the time it was being constructed caused quite a scandal in those days. According to legend, the six Sultan Ahmet Mosque minarets were the result of the architect’s misunderstanding of the Sultan’s request for"altinminareler" (gold minarets) as opposed to "altiminare" (six minarets)!

Of the six minarets, four stand at the corners of the Blue Mosque and have three balconies each, while the other two minarets, located at the end of the forecourt have only two balconies. Historically, the prayer caller would climb the narrow spiral staircase five times a day to announce the call to prayer. In these modern times, the Sultan Ahmet Mosque’s call to prayer is done using a public announcement system. Today, the Sultan Ahmet Mosque minarets is a feature that has become synonymous with the Blue Mosque as much as its ‘blue tiles’.

Another architecturally distinctive feature of the Sultan Ahmet Mosque is the use of domes and half-domes in its exterior. The domes are arranged in such a way that they seem to flow downwards from the mosque’s centrally located dome. The overall look is very symmetrical and pleasing to the eye. It also gives the Sultan Ahmet Mosque architecture a very distinctive exterior outlook.

All Muslims can use the mosque’s west entrance which is very beautifully decorated, while the north entrance is reserved for all other visitors. An interesting feature at this entrance is the chains that hang from the ceiling that visitors’ must go under, thus, automatically bowing and giving the Blue Mosque its due respect.

As you go inside the Sultan Ahmet Mosque, you will realize the significance of its other name – the Blue Mosque. The lower walls are lined with 20,000 blue handmade 16th century Iznik designtiles, while the upper sections are painted blue. If you spot any blue tiles that are designed with flowers, trees and other abstract patterns, then be sure that you’ve just spotted some of the oldest tiles used inside the mosque. These Iznik tiles are also used on the north wall above the main entrance and in some of the galleries.

In the main prayer area of the Sultan Ahmet Mosque you will find the mihrab made of finely carved marble and surrounded by windows. To the right is the mimber (the pulpit) used by the Imam to conduct his sermons during the noon prayer time on Fridays and on other holy days. There is also an impressive imperial loge that is supported by ten marble columns. The floors are covered with carpets, which have to be regularly replaced as they get worn out.

There are also more than 200 windows to be found inside the Blue Mosque. The glass in these windows were once original 17th century stained-glass, but are today only duplicates that have no significant merit.

The Sultan Ahmet Mosque was commissioned by Sultan Ahmet I when he was only 19 years old as a means to re-assert Ottoman power in Istanbul, Turkey and make his mark in the imperial city. He chose a location close to the Hagia Sophia and the site of the ancient Byzantine Hippodrome which is close to the Byzantine imperial palace - Topkapi Palace. Construction which started in 1609, took seven years to complete. The Sultan Ahmet Mosque address is considered to be exclusive; as it is located in the midst of the city of Istanbul unlike other mosques in the city, mainly a result of Sultan Ahmet’s quest for prestige. In fact, the Sultan was so concerned with building a landmark mosque that he sometimes also assisted in the work. Unfortunately, he died at the age of 27, just a year after the mosque was completed.

The Sultan Ahmet Mosque is open daily from 09.00 am till one hour before dusk. The mosque is closed half an hour before and until half an hour after prayer time. On Fridays, the Blue Mosque is closed an hour before until an hour after the noon prayer. During the evening call to prayer, large crowds of both Turks and tourists gather in the park facing the mosque to hear the call to evening prayers and watch the brilliant sunset and the mosque being vividly lit up by colored floodlights.

Between May and October there is also a daily sound and light show just after dusk. The show is conducted in Turkish, English, French and German on different evenings, so don’t forget to check the language of the day before you go for the show!

The Sultan Ahmet Mosque does not charge an entrance fee from visitors, but donations are welcome.

Since the Sultan Ahmet Mosque is located centrally in the city of Istanbul, there are ample halal eating places to be found. Muslim travelers can choose cuisines from across the globe ranging from European, Mediterranean, Asian, Indonesian, and Turkish to Middle Eastern and also have a choice of halal foods from vegetarian, barbeques, and fast foods. There are several good restaurants around the Blue Mosque that serve halal food, these include Café Rumist, Fuego Restaurant,Warung Ibu Deden and Ziya Sark Sofrasi.

For every traveler to Turkey, the Sultan Ahmet Mosque a must visit site. However, for the Muslim traveler, the Blue Mosque presents an opportunity for you to pray within the hallowed walls of an Ottoman built Mosque of magnificent proportions and design!