Article Written by one of our contributing writers.

When I was a little girl I only ever remember learning about anything dealing with Islam in a negative way. Everyone around me taught me that if I didn't pray I would burn. If I didn't fast I would burn. If I didn't wear the correct attire I would burn. This terrified me. No matter what I did Islam meant I would burn and all I could envision was the flaming gauntlets of fire. As I grew older though it just didn't make sense to me. What type of Creator would want to burn me for everything I did? So I began reading up on my own and started to self-educate. I sifted through what I felt didn't add up and tried to see the beauty in a religion I was sadly made to fear. Perhaps that's why so many of us became rebellious teens who would lie about fasting and praying. It was fear that drove us to do what was expected of us. That's why I decided that when I had kids of my own I was going to teach them the religion of peace, peacefully, instead of relying solely on fear.

The sacred month of Dhul Hijjah is here and while one's best clothes are being bought and treat being stored away it's vital to also teach our children about this beautiful month. 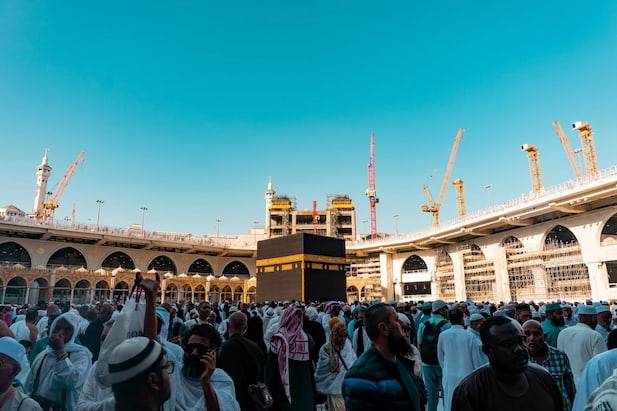 During this month, Pre-COVID, millions of people from around the world would make their way towards the sacred lands of Makkah and Medina to perform the Hajj. Although it is a taxing task I personally feel the best way to teach your little one about Hajj is through Umrah. They learn on a minor scale the expectations of Hajj such as the recitation of the Labaik, the shrouding of the Ihraam, the dignity one must uphold, and the bountiful mercies that descend upon these holy cities. I took both my sons for Umrah, the eldest went twice and while many people frowned in disagreement, asking me why would I waste a trip on him because he'll never understand, I can not emphasize enough the impact it had on him. Now at 10 years old, his little heart still yearns for the peace of Medina. I find this with masjids as well, I made my eldest go for prayers at just 3 years old, and while he would play and cause havoc occasionally, and the elders would silently chastise him, he learned the etiquettes of the masjid and today through the Mercy of the Almighty gets upset if I don't wake him up to pray the morning prayer. I took my second one for Umrah when he was 6 months but to be brutally honest that I would not advise anyone to do this trip with a child this young - but that's a tale for another day. However due to Covid and in some other instances, circumstances may not allow us this opportunity, we need to make do with what we have.

The most important thing is to first remind your young ones that Hajj is a compulsory journey - a pillar of Islam - for those who can afford it. So although it is a must it isn't the crowning moment to your Deen. Many people feel that once they have completed their Hajj they have secured their tickets in the Hereafter but while I was on Hajj one of the learned scholars with us said something that stuck with me up until now, "Think of your 5 pillars, Hajj is only once in a lifetime and only if you can afford it... Your prayers are 5 times daily... So what does that tell you about the importance of your salaah? '

Teach your children that while they should most definitely aspire towards the journey they need to also consider and practice their other pillars as well. A beautiful exercise for the days of Hajj which my son does at school but it can also be done at home is to construct a mini Kabah. Get a piece of white fabric for an ihram and some zam zam water and dates. If possible procure a tent- some online Instagramers stock beautiful fabric tents- and actually demonstrate the days of Hajj with your children; obviously in an afternoon or day if possible. Don the ihram, read the two rakats required for your ihram, head to the spot with your tent and call it Mina, move after an hour up to Arafat, then to Muzdalifa (it will be amazing if you can camp outside for the night just like in Muzdalifa) pelt the shaytan and end with a tawaf. On the way teach your children about the significance of each place and action. I know this can be a tad cumbersome, especially for the working parent but children are abstract learners and I feel teaching them to love and understand the virtues will have a far greater impact on them than merely insisting they pray and fast on the day of Arafat least they burn. If you are pressed for time there are many online videos on YouTube and Interactive books that show you the steps.

The Day of Eid Al-Adha 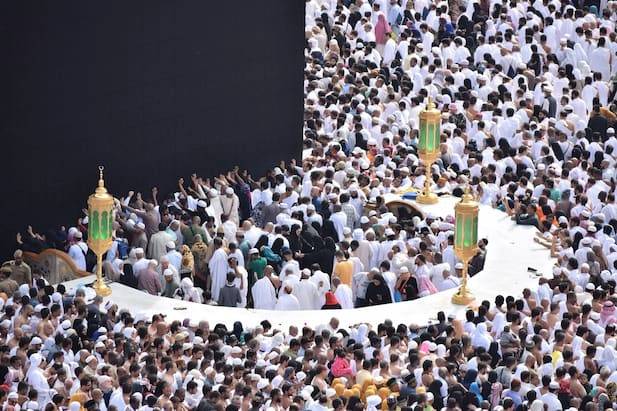 Eid ul Adha signifies the very important moment when Ibrahim AS was ordered in a dream to sacrifice his beloved son by Allah SWT Again the beauty of an Umrah is that on the Ziyarat Tour not only are you taken to Mina and Arafat but you are also shown the stone upon which Ibrahim AS laid his son. This brings me back to how we should teach our children about this event. As a youngest, and again I'm sure many of you can attest to this, we were taught, 'Look at the sacrifices of the prophets before us we can't even give up one of our daily luxuries hence we have no faith!' No, as an Educator I can tell you that positive reinforcement works better.

Why not rather approach it as, 'Look at the mercy of Allah S.W.T. Through His Mercy, Allah would not allow a servant of His to endure such pain and would not let him lose his son so Allah brought down a sheep to ease his heart and that is why we perform this act on Eid... and as a result, Allah showers His Mercy upon us too.' Get your children to fall in love with their religion and its rituals. Another more practical aspect that I feel is sadly getting neglected is the actual sacrifice on the day of Eid. With EFTs and the like, it is so easy to simply pass the burden off on someone else and send a share or sheep to a poverty-stricken country. I personally think in order to properly teach your children one should slaughter an animal at home or on a farm. We should allow our children the opportunity to engage with the animal, tell them that it is their purity that reaches Allah not the price of the animal, and let them see the positivity in the action. If finances don't permit there's no harm in taking them to a farm and letting them see the sheep being slaughtered. And despite popular belief...it does not scar the child but rather conditions them towards the rituals of the day. Eid should not just be about eating and meeting family, it should also be about educating our children about the beauty of Islam. However, the day can still be made festive with the inclusion of mini sheep cupcakes and sheep-themed Eid cards.

Forgive me if I have offended anyone through this article. It is the opinion of but one. May we always be guided towards all that is good.