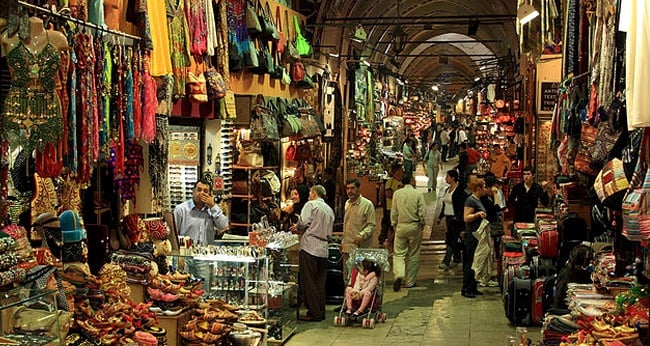 A visit to Istanbul, Turkey cannot be considered complete without entering the maze that is the Grand Bazaar. Appropriately named, the Grand Bazaar (also known as Kapali Carsi) has over 5,000 shops located in an area that spans over 50,000 square meters with 60 interconnecting streets. This huge shoppers’ paradise that is the Grand Bazaar, has been a part of the Istanbul landscape since the mid-1400s when it was first commissioned by Mehmet II.

The Grand Bazaar which originally consisted only the one domed-building was further expanded in the 1500s, and went through a restoration period in the late 1800s following an earthquake. Today, the Grand Bazaar Istanbul is renowned as one of the largest and oldest covered markets in the world.

In fact, the Grand Bazaar was used as a location for the James Bond movie Skyfall.  Scenes in the opening sequences of the movie where James Bond is leaping and jumping over roofs and running through crowded market streets showcases several streets and shops of the Grand Bazaar Istanbul and gives viewers a brief glimpse of the adventure that is the Grand Bazaar.

Interestingly, the Grand Bazaar is also considered as the biggest jewelry bazaar in the world with shops selling all kinds and types of jewelry. The most popular jewelers and the best gold and diamond jewelry is found on the Kalpakçılar Street.

With such credentials, every visitor to Istanbul would surely want to experience this unique shopping mall that is considered to be the world's greatest market!

The Grand Bazaar has shops that offer a range of wares from cloth, spices, souvenirs, books and antiques to gold and silver and everything in-between! Most of these shops cater to tourists, but there are also some local shops that sell authentic Turkish products and wares.

So the question arises – what to buy at the Grand Bazaar? Some favorite items are beautiful Turkish carpets and rugs, glazed tiles and pottery, copper and brassware, authentic leather products, apparel made of cotton and wool, spices, antiques, gold jewelry and silverware. While browsing around for souvenirs, visitors can also consider buying swords and daggers to take home.

One good thing about the Grand Bazaar is that shops with wares of a similar kind are clustered together. So, when looking for a particular type of item you would be able to check-out a few shops in the section and make a choice that best fits your tastes while picking up great bargains! The map may be helpful although a little dated. If you get lost (which is considered by most a part of the fun attached to a Grand Bazaar visit) simply follow the prominently placed signs to get to where you want to go… that is, if you know where you want to go! Otherwise, just relax and enjoy the authentic experience that is the Grand Bazaar Istanbul.

Shopping at the Grand Bazaar

When trolling the shops at the Grand Bazaar do keep in mind the one thing that is common - the bargaining that goes on and is expected! So, visiting the Grand Bazaar shops with someone who is great at spotting and getting a good bargain would be the ideal scenario. Do note that while light and playful bargaining is accepted, it is not acceptable to get aggressive. If you change your mind or don’t like the way the bargaining is going, just leave and move on to the next shop. If any shop owner gets aggressive, simply tell them firmly but nicely to back off.

The shopping experience itself will be overwhelming with the noise and the crowds made up of thousands of tourists and locals alike. Remember, that you cannot expect the Grand Bazaar shopping experience to be rushed… it will take time and patience. So, if you don’t have either; then it may be best to visit the Grand Bazaar when you have ample of both!

Safety at the Grand Bazaar

On the whole the Grand Bazaar is a safe place to visit. However, as is quite the norm in any crowded place, pickpockets, bag-snatchers and bag-slashers are to be expected. Therefore keep your wallets and any other valuables close to you, and ladies should make it a habit to hold their handbags and purses in front of you.

The Grand Bazaar has 21 entrances, so finding your way inside is quite easy. There are however, five main entrances/gates that are most commonly used due to their location. Of these the Çarşıkapı Gate is the most used due to its easy access from any of the major sightseeing spots on Sultanahmet Street and the tram stop nearby. Visitors can also use a taxi, but beware that this form of transport could be expensive and also take longer to reach… you really want to get to the Grand Bazaar soon and allocate as much time as possible to spend inside rather than in getting there!

The problem visitors may have is when leaving the Grand Bazaar. Due to its vastness and maze-like streets, one can start at one end of the Grand Bazaar and end up at the opposite end. So, it might be best to have a map handy to lead you to the entrance from which you can move onto to your next destination without much hassle.

Grand Bazaar Opening Hours: Monday to Saturday from 9.00 am to 7.00 pm. Closed on Sundays, and bank and religious holidays.

Mosques Around the Grand Bazaar

Eateries, cafes and restaurants that serve halal foods are in abundance in and around the area of the Grand Bazaar Istanbul. There are also several cafes and restaurants inside the Grand Bazaar that serve halal food such as the Havuzlu Restaurant which serves amazing Turkish food and also the Fes Café next to an Abdullah shop, where you can enjoy Turkish coffees and sweets and any vegetarian food. Alternately, if you need a break from the hustle and bustle that is the Grand Bazaar, there are some restaurants and eateries in close proximity (approximately 0.1 to 0.2 km from the Grand Bazaar) such as another Fes Café, the Nar Lokanta, Hakkizade 1864 restaurant, Aynen Kebap, Buhara Ocakbasi Restaurant, and Donerci Sahin Usta.  The Taka Balık is another eatery which is just a stone’s throw away from the Huseyin Aga Mosque that serves good seafood in a simple style.

To cater to today’s technology savvy customers, the Grand Bazaar Istanbul has gone online. Founded in 2015 by two sisters whose childhood was spent in their family owned shop in the Grand Bazaar; combined their knowledge with their passion for e-commerce and accessible shopping; to bring to the world Online Grand Bazaar Shopping at http://www.grandbazaarshopping.com/.

Click here for a complete Muslim-friendly guide to Istanbul!