The Thrill and Excitement of Shark Cage Diving 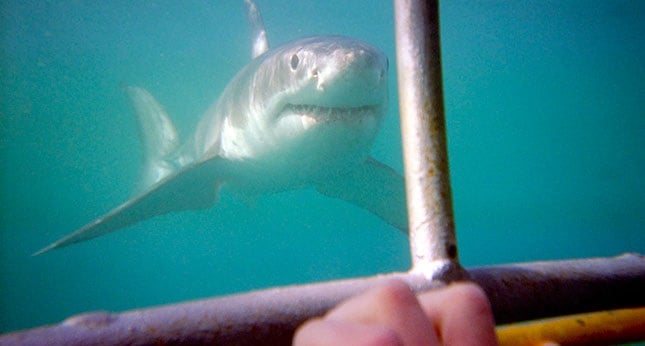 Shark cage diving is truly a one-of-a-kind experience that lets you encounter some of the fiercest, yet most majestic, creatures that roam the oceans. Considered to be amongst the most exciting adventure experiences in the world, shark cage diving is an activity that is on the bucket list of almost every adventurous traveller. We have compiled a list of some of the world's best places where you can reliably dive with great white sharks - the largest known predatory fish in the world.

South Africa is well-known for being an excellent location for shark cage diving. Seal Island and Gansbaai in particular are two popular shark cage diving spots and offer a fantastic opportunity to observe Great White Sharks in pursuit of their favourite prey – Cape fur seals as well as penguin colonies.

2) Mexico Mexico is another popular shark cage diving destination – home to the volcanic island of Isla de Guadalupe, located about 200 kilometres off the west coast of Mexico's Baja California Peninsula. Operators are able to immerse shark cages up to 30 feet deep into the water to provide divers a true shark’s-eye view.

Travellers may also opt to head to California's Farallon Islands, a group of islands that lie about 50 kilometres outside the Golden Gate strait. The waters of the area are home to numbers of Great White Sharks that are known to feast on elephant seals that reside in the Gulf of the Farallones National Marine Sanctuary.

South Australia's Neptune Islands can also be visited to observe large and healthy populations of Great White Sharks. The islands are a marine reserve home to masses of New Zealand fur seals that visit it during their breeding season in summer – which is when the sharks become most active. However, enormous female sharks can also be witnessed during winter.