The Top 10 Attractions for Muslims to Visit when in India 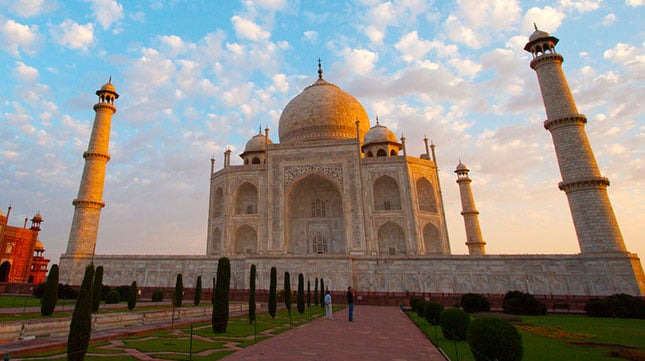 Located in South East Asia; India is a country that has been blessed with exotic cities and diverse landscapes, unique cultures, flavorful food and so much more. It has increasingly become a popular tourist destination and is said to attract millions of tourists from all over the world. The attractions it offers will fascinate visitors and will keep them thoroughly occupied. Thus, choosing just ten of them is no easy feat. This list therefore consists of some World Heritage Sites and some of our personal favorites, as well as attractions known to draw in Muslims.

You shouldn’t be surprised that the Taj Mahal is the first on our list! This beautiful white marble mausoleum was built by Mughal emperor Shah Jahan in memory of his wife, Mumtaz Mahal. It is not only one of the finest examples of Mughal architecture, but is also a UNESCO World Heritage Site.

Located on the island of Jag Niwas in Lake Pichola is the 83 roomed, 5-star luxury hotel; Lake Palace. Constructed by Maharana Jai Singh II in 1746 as a royal summer palace, Lake Palace is said to be one of the most beautiful palaces in the world. It is home to numerous courtyards, stunning fountains and gardens, and is renowned for its breathtaking architecture and views.

Also located in Agra is another UNESCO World Heritage site; the Agra Fort. This 16th-century Mughal monument is also known as the Red Fort and is situated about two and a half kilometers away from the Taj Mahal. Within this red sandstone fortress, visitors will find the imperial city of the Mughal rulers.

A visit to India is not complete without a visit to what is said to be one of the most famous forts found in Rajasthan; the Amer Fort. Located 11 kilometers from Jaipur this old fort, also known as Amer or Amber Palace, was built in 1592 by Raja Man Singh and is a world-renowned attraction. On the inside, visitors will find numerous buildings as well as architecture that is said to have been influenced by both Hindus and Muslims.

The Jama Masjid or the Masjid-i Jahān-Numā is India’s largest mosque and is said to be able to hold a mind-blowing 25,000 people. Located in Old Delhi, this mosque is frequented by millions of Muslims and non-Muslims, locals and tourists. It is also one of the last architectural works of the Mughal emperor Shah Jahan and was built between 1644 and 1658.

Built to commemorate the visit of the British Monarch, King George V and Queen Mary, the Gateway of India is a magnificent landmark and is said to be the city's top tourist attraction. This 26 metre high structure which was built in 1924 is not only Mumbai's most famous monument; it is also one of the most unique landmarks in India.

Although in ruins, this 9 storey palace built by King Sengge Namgyal in the 17th century as the royal residence, is definitely a must-visit attraction in India. Located in the Himalayas, the Leh Palace might not be easy to reach, but this journey certainly contributes to its appeal. The majestic palace is home to a museum which holds a collection of items that are hundreds of years old. Visitors will also be treated to incredible panoramic views of Leh and the surrounding areas while here.

Kerala is said to be one of the most preferred tourist destinations in India, which doesn’t really surprise us. The Kerala Backwaters comprise of beautiful lagoons and lakes which lie parallel to the Arabian Sea. For nature lovers, a visit to this area will prove to be the highlight of their trip. Tourists must take a cruise on a House boat down one of Kerala's incredibly stunning backwaters to experience the true beauty of the surroundings.

Amba Vilas or the Palace of Mysore is one of the largest palaces in India, and was the residence of Wodeyar Maharaja. In 1897 the palace was destroyed in a fire and was subsequently rebuilt in 1912. The Mysore Palace is said to be one of the most famous tourist attractions in India, due to its unique architectural blend.

Located in Srinagar, Jammu & Kashmir, the Jamia Masjid was originally built in the 1400’s by Sultan Sikandar and was later expanded. The mosques incredible architecture, along with the 370 wooden pillars which support it draw in tourists from all around the world. It is one of India’s most sacred mosques and is the biggest Mosque in Kashmir; known for surviving the ravages of time. Also worthy of a visit is Goa, which is India’s smallest state known for its exotic beaches; like Palolem Beach, Kashmir, and Darjeeling which is known to produce some of the best tea in the world, and is home to some of India’s most popular hill resorts.