The Top 5 Busiest Airports in Canada 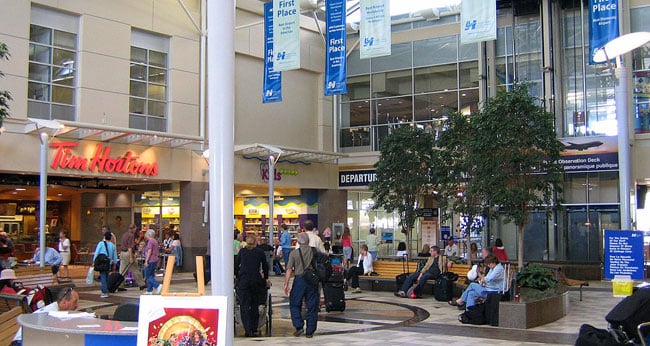 With Canada being home to incredible natural beauty and lots to see and do, it is not a surprise that it has become one of the most popular destinations for migration and education, and a renowned travel destination as well. This article features a list of this country’s busiest airports and the different facilities they offer.

With over 38.6 million passengers annually and 400,000 flights a year, Toronto Pearson International Airport is the largest and busiest airport in Canada. Not only is this airport architecturally stunning, it also offers a variety of facilities and services ranging from a world class travel lounge, to free Wi-Fi, numerous stores and restaurants, to art and exhibits; including 2 dinosaurs in Terminal. Toronto Pearson also offers interfaith centres in Terminals 1 and 3, which can be used by travelers of all religions, including Muslims.

Coming in at number 2 with a whopping 19.36 million people in 2014, Canada’s Vancouver International Airport offers flights to a number of international destinations in the Unites States, Asia, Europe and more. A favorite among passengers, this airport is known to be one of the best airports in the world, and has won numerous notable awards. It features one of the world's largest collections of Pacific Northwest Coast Native art, a beautiful interior and numerous facilities, including shopping and dining outlets, a kid’s play area and an interfaith chapel in the International Terminal, on Level 2.

Serving as a hub for Air Canada and as WestJet’s headquarters, Calgary International Airport is Canada's third busiest airport, receiving 14.3 million passengers in 2013. As with the other two airports above, Calgary International Airport also offers a wide variety of services. It houses a number of stores and restaurants, lounges, an interfaith chapel, and even an educational and entertainment facility; SpacePort.

Fourth on our list of the busiest airports in Canada is Montreal Pierre Elliott Trudeau International Airport, which serves the Greater Montreal area as well as some cities in the Unites States. Also the busiest airport in the province of Quebec, this airport saw over 14 million passengers in 2014. Amenities found here include duty free shops and boutiques, a variety of restaurants and cafés, a multi-faith prayer area and free Wi-Fi.

In terms of passengers, Edmonton International Airport is Canada’s fifth busiest airport and is also its largest airport. It offers flights to major cities around the world, including Chicago, Los Angeles and London. Passengers on long layovers will also find this airport treat, with art and live entertainment, a great selection of restaurants and stores, and so much more. .