5 Top Things to Do in Riyadh, Saudi Arabia

As we know, the borders are finally opening up in some countries and since we have been stuck inside our houses for almost two years, who wouldn't like some fresh air?

And what is a better place to visit than an oasis that has seen tremendous development over the centuries?  A city that developed to catch up and go beyond time but never forgot how they started or what their purpose is.

Riyadh Province, also known as Al Wosta, is now a metropolitan city with a bustling financial and business hub and a rising cultural scene. It's a historic city with a variety of forts, palaces, and museums, as well as some of the country's most vibrant souqs.

So without further ado, let’s plan a trip to the capital province of Saudi Arabia. Here are some of the top things you can do in Riyadh: 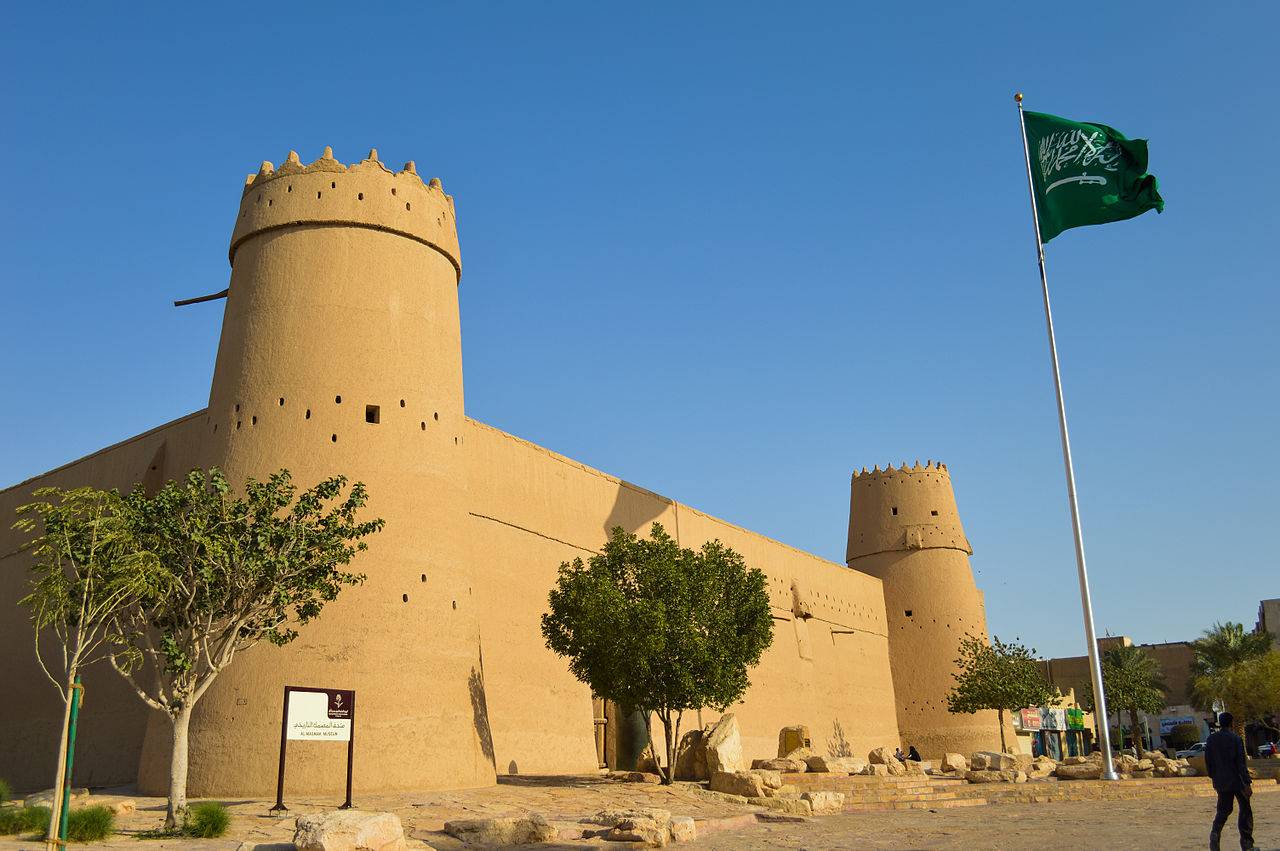 Al Masmak Fortress was built in the year 1865. It is a vast clay and mud-bricked citadel. It was captured by King Abdul Aziz in the year 1902 after he came back from living in exile in Kuwait.

It was from this fortress, King Abdul Aziz Al Saud conquered and united different nations and provinces which led the way to present-day Saudi Arabia. The fortress that housed the garrisons became an ammunition warehouse and a prison after the capture.

Today, it has been restored as a museum building and is a favorite among tourists who are interested in discovering the roots of Saudi Arabia.

Some of the intriguing exhibitions on display include maps and photographs of Saudi Arabia from 1912 to 1937, as well as a variety of historical artifacts, works of art, and audiovisual presentations.

Visitors can also watch a short documentary that re-enacts King Abdulaziz's capture of the fortress, the spearhead of which can still be seen embedded in its wooden gate. The fortress's expansive courtyard is also worth exploring.

Experience History At The National Museum of Saudi Arabia 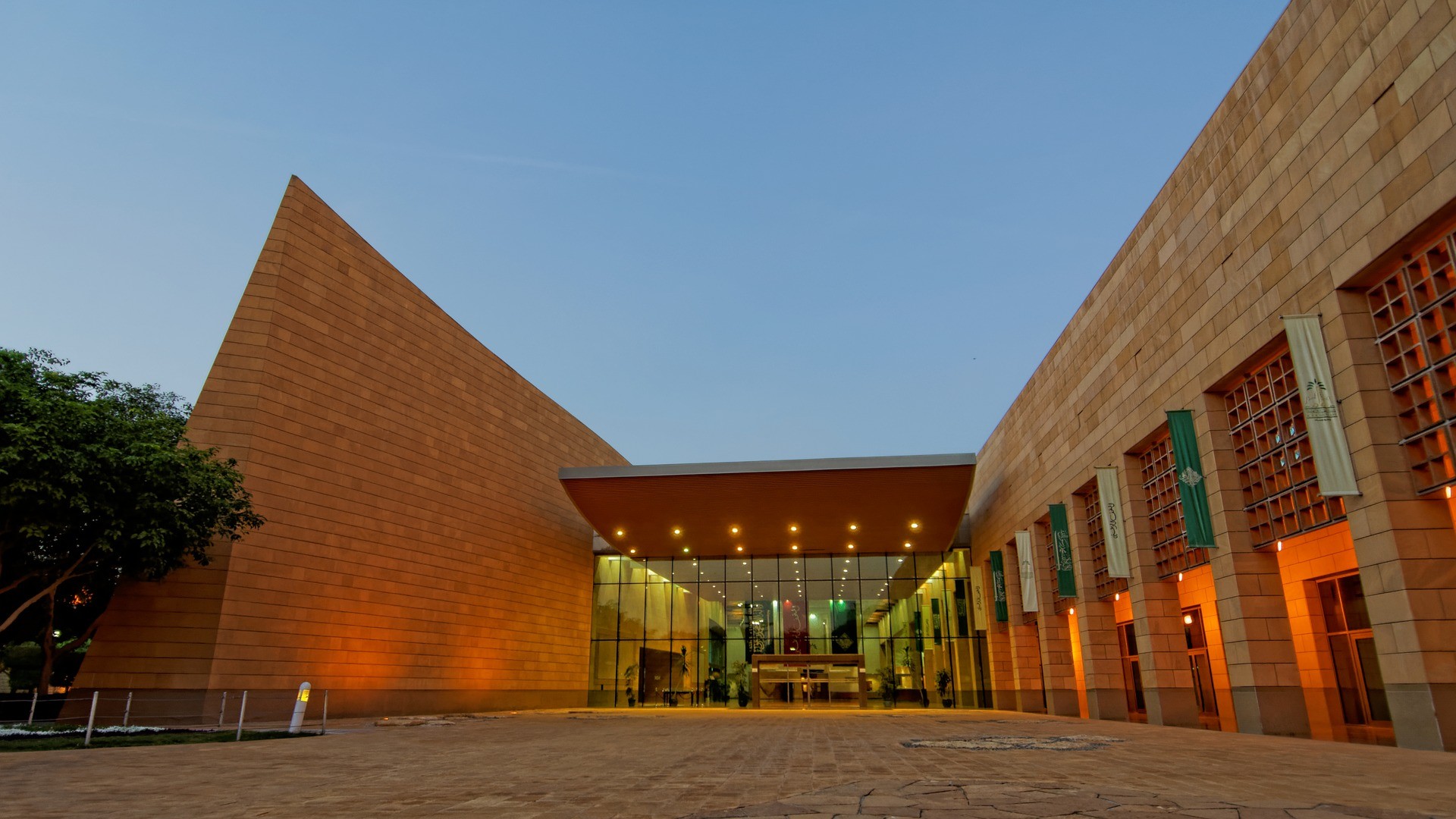 The National Museum Of Saudi Arabia, Riyadh, was established in the year 1999. The museum explores centuries of Arabian prehistory, history, culture, and art of the kingdom.

The eight halls of the museum showcase different interesting experiences, activities, programs, and some permanent collections. Here, the first hall talks about the origin of life. It is called Man and The Universe and is dedicated to the earth’s history.

Hall two traces the past. It explores the ancient civilizations of the early, middle, and late Arab kingdoms, moving into the pre-Islamic era.

The third hall is called the Prophet’s Mission Hall. It explores the journey to Islam and the life of the Prophet Muhammed (PBUH) from his birth in Makkah to his migration to Madinah.

The rest of the halls focus on the birth of Saudi Arabia. They trace the history of how Saudi Arabia started from two states and finally became a unified nation in the year 1932.

Cost: SAR 10 for Adults, free for children and students. 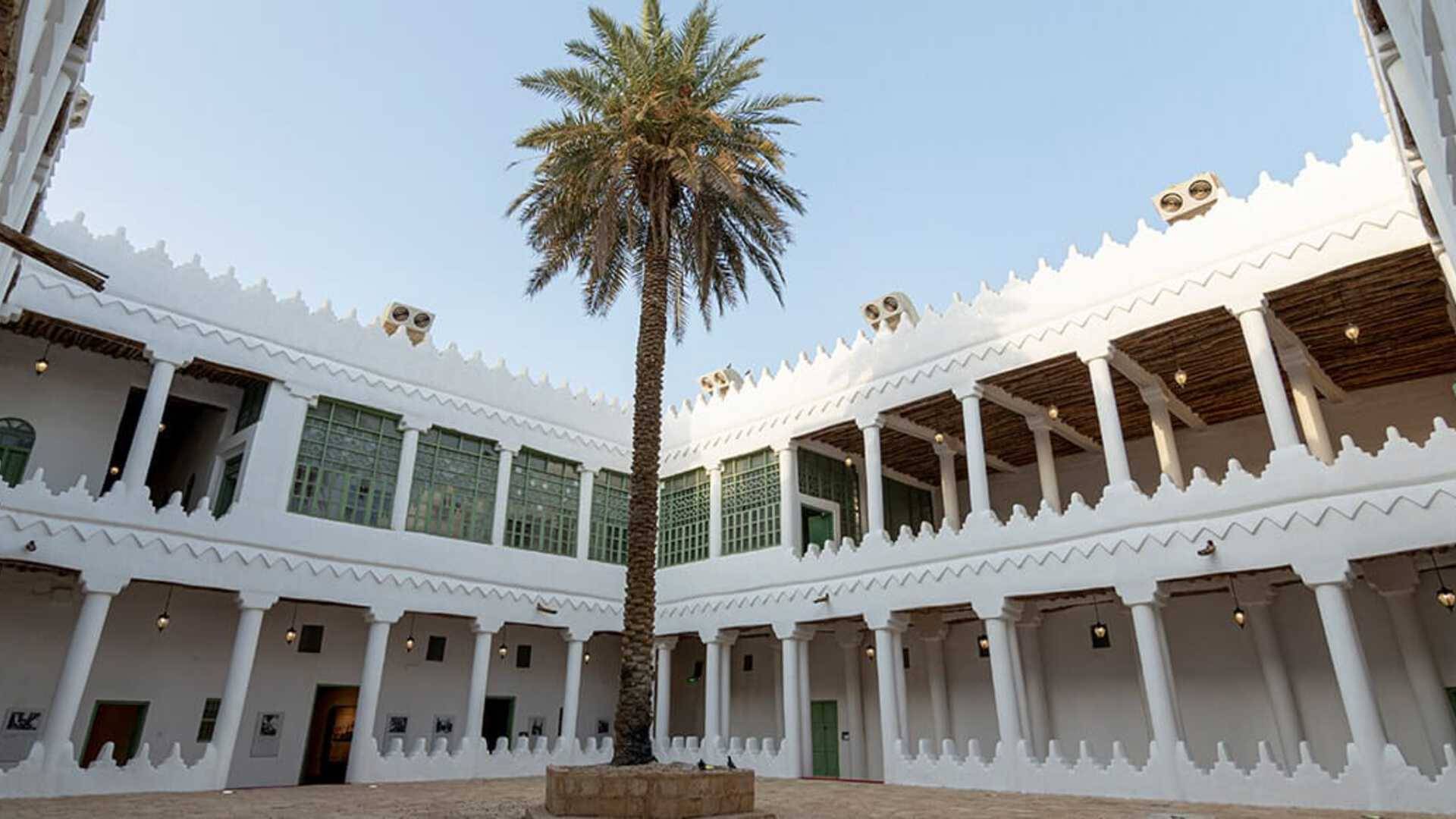 Al Murabba Palace or Qasr Al Murabba is a historic building housing a museum. It is close to the national museum and is the former home and court of King Abdul Aziz. It was constructed outside the walls of the city on what used to be farmland during winter.

The construction of Murabba Palace marks the expansion to a new era of possibility. This palace is where the king lived after its completion in 1938 till his death in 1953.

It is best to visit during winter or spring when you can stroll the palace garden or inside you can find the king’s memorabilia of his personal belongings, photographs of meetings, and even his Rolls Royce gifted by Winston Churchill. You can also see the king’s personal lift, the first-ever installed in the country.

These places are great for any history buff out there. You can really see how a mere oasis in a desert plateau became a marvelous metropolitan city.

When we think about Saudi Arabia, most people think of a plain desert. But that’s not the only thing in Saudi. Here are some places where you can truly connect with nature: 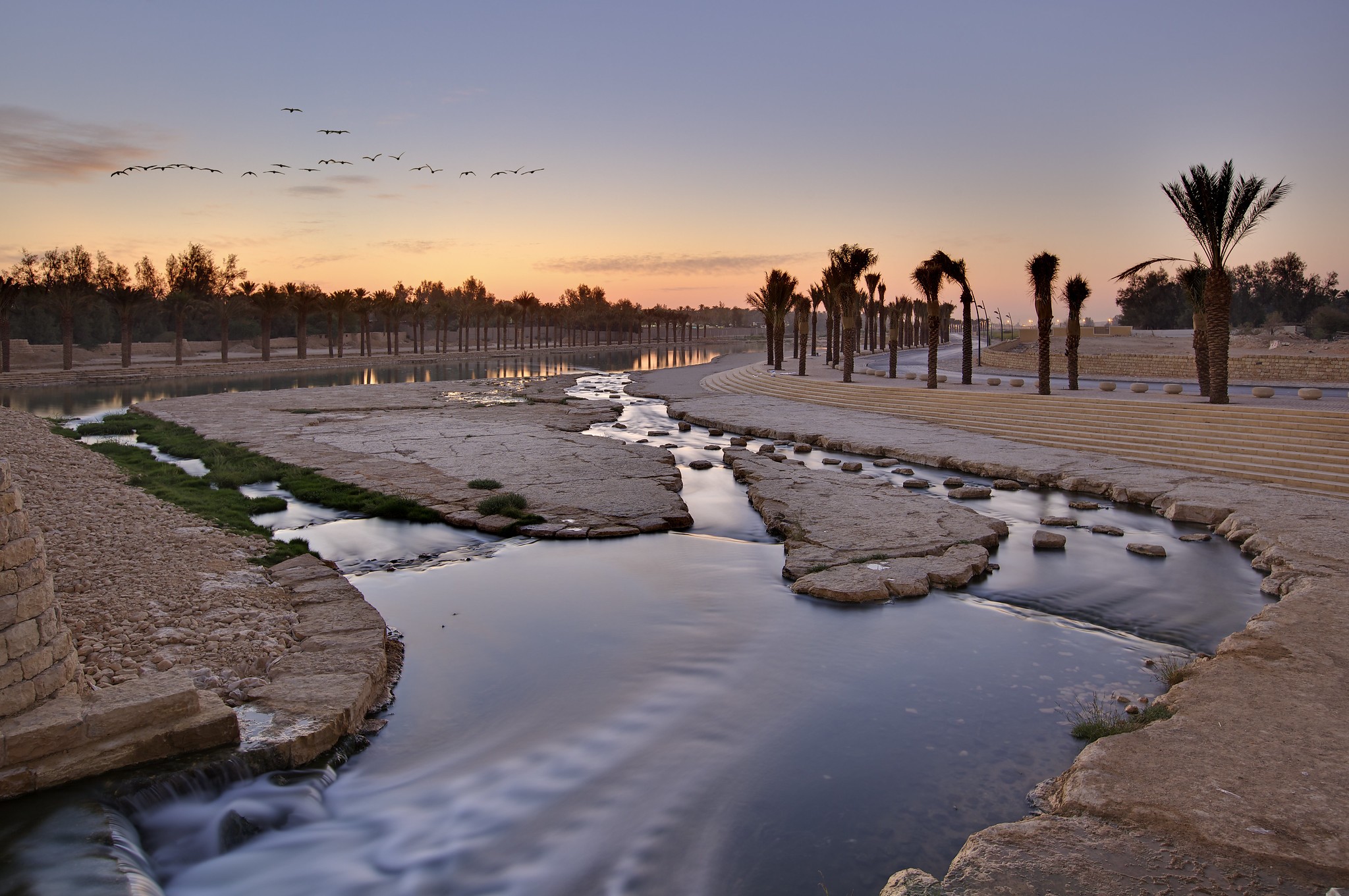 Wadi Hanifah is a valley named after the tribe Banu Hanifah who used to live in the surrounding area. It is one of the longest and largest valleys in Saudi Arabia. It extends up to 80 KM.

It is a beautiful place to spend time and have picnics with your family and friends and to have picnics. A good place for cycling and other activities.

King Abdullah Park is one of the largest parks in Saudi Arabia and stretches over 318 thousand square meters. It is considered a beautiful entertainment outlet.

The park is filled with greenery. It also has many water surfaces and picnic spots suitable for youths and families. The park also has children’s playgrounds, sports stadiums, festival arenas, event buildings, cafes, and restaurants.

King Abdullah Park is known for the innovative designs of its seats and pathways that connect all facilities and allow visitors to walk around and enjoy the fascinating atmosphere and amazing scenery.

This park is famous for having the Kingdom's largest interactive dancing fountain. It is a major attraction for many visitors because it plays an important role in enhancing the beauty of the place and adding more entertainment with the water paintings on the lake's surface.

A beautiful park to spend time with your family and get lost in the marvel of nature and its greenery. 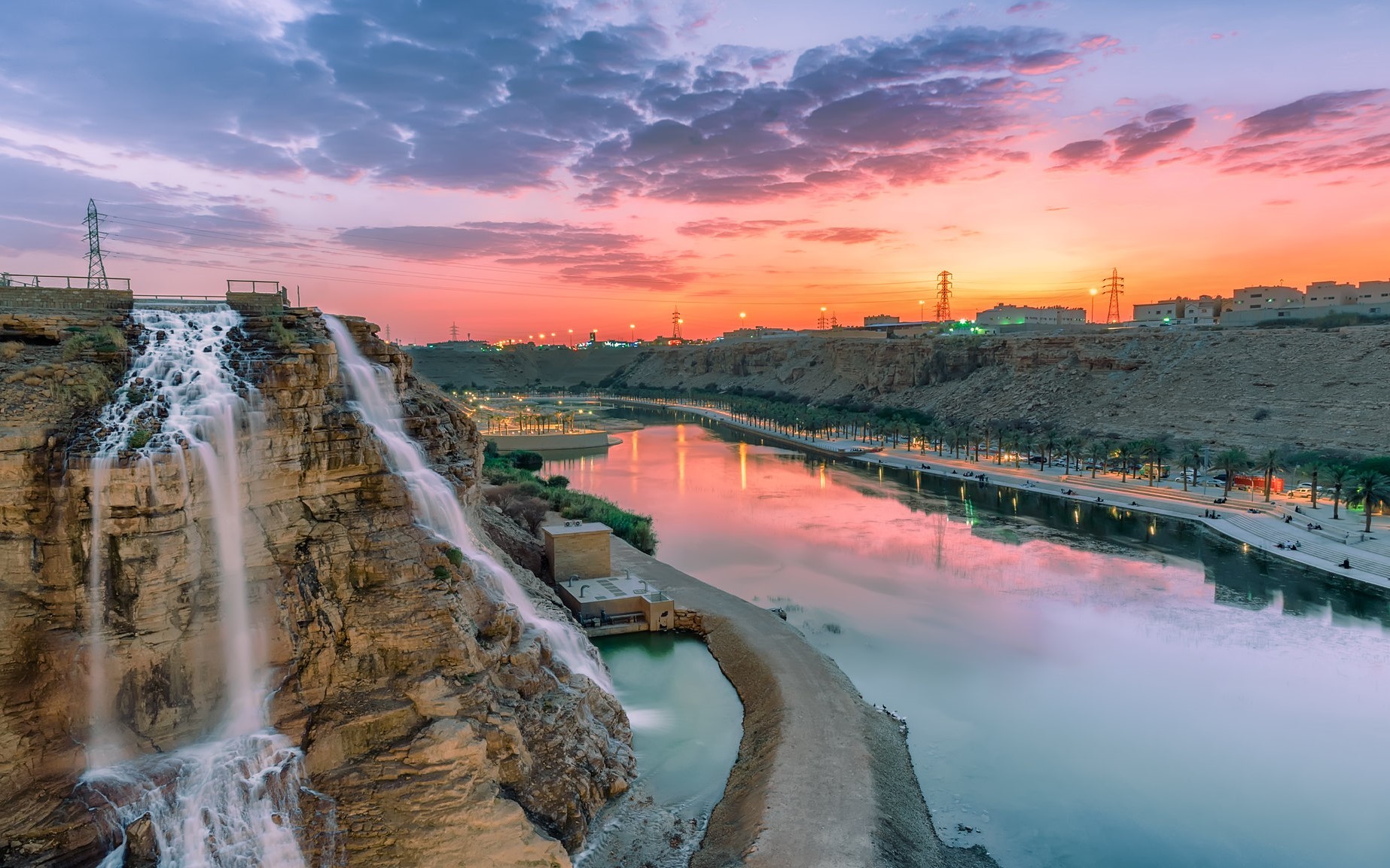 Wadi Namar, also known as Riyadh corniche, is a distinct tourist destination because of its breathtaking nature. The most attractive area of the park is the lake because it reflects the beauty of the park. It is 200 thousand square meters with a depth of 20 square meters.

The park is the perfect place to watch different kinds of birds and fish. It is also an ideal place for running and exercising. 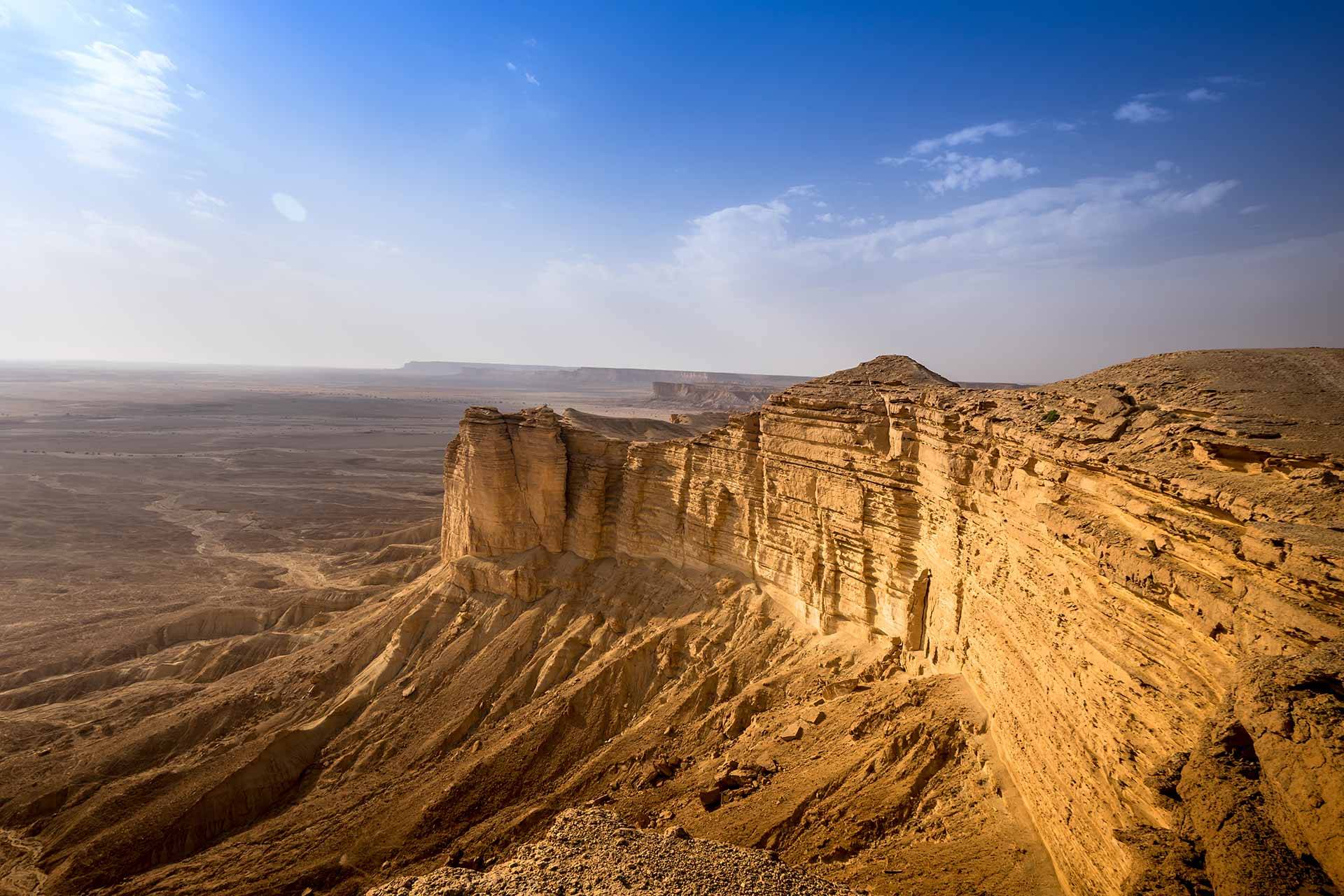 Jebel Fihrayn, famously known as the edge of the world, are cliffs that rise towards the sky like a great wall.

The cliffs are the result of the tectonic movement of the Arabian plate toward the northeast caused by the Red Sea rift spreading 1,000 kilometers west of the Tuwaiq escarpment.

It is a geological wonder from where you can see the horizon uninterrupted. That is how it got the name ‘Edge of The World’.

There are several hiking trails along the cliffs and you might even come across some fossils from when the region was part of an ocean bed. It is the perfect place for any adrenaline junkie or an aspiring paleontologist.

Things To Keep In Mind While Visiting Riyadh

When it comes to visiting Riyadh, the below-mentioned information will help you out more:

Riyadh has many hotels and resorts that provide spectacular views. Finding a hotel wouldn’t be hard for anyone. Here are some of the hotels you could stay in:

Saudi Arabia is a very hospitable place and the locals there are kind. You will find yourselves comfortable within a few hours.

Riyadh has a vast number of Mosques and finding one is never difficult. The Great Mosque of Riyadh is the city's main Mosque.

Visitors to Riyadh can sample a variety of cuisines, including authentic Middle Eastern and international fare. 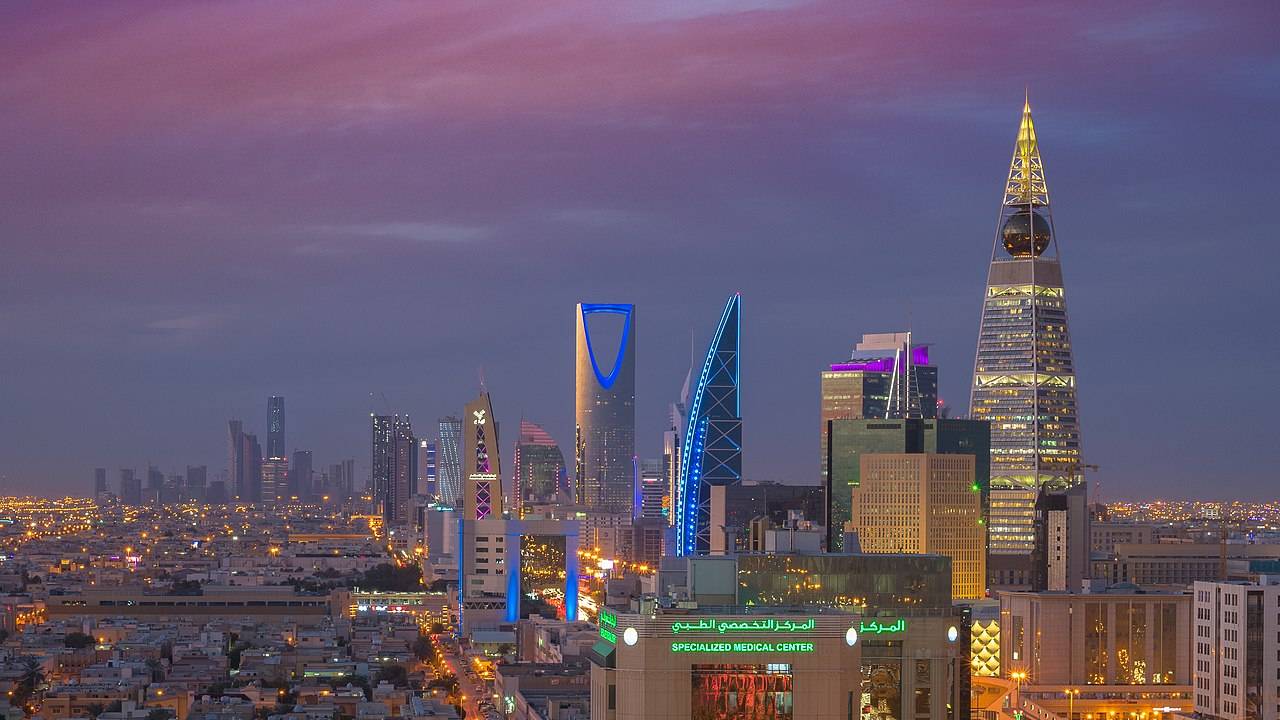 These are some of the most wonderful places one can visit in Riyadh where you can learn about the history, culture, and traditions.

Riyadh is a hub where the future meets the past to make a wonderful experience for its visitors and its locals!

As we are still in the middle of a pandemic, there are some precautions and procedures for travelers from abroad relating to quarantine and safety protocol. You can read about it on the visit Saudi webpage.

If you want to know more about exciting destinations in Saudi Arabia, or any other country, head over to the Halaltrip blog!