Top 7 Mosques to Visit In India

India is one destination that is on each travel enthusiast’s list. Be it the food, the culture, the people, or the history – India has something to offer to everyone. Although, people often neglect Indian Mosques - which are a sight to behold.

So, to make sure that you get the best out of your trip to India, we’ve compiled a list of some breathtaking Mosques across the country that you absolutely cannot miss. Read on to know more. 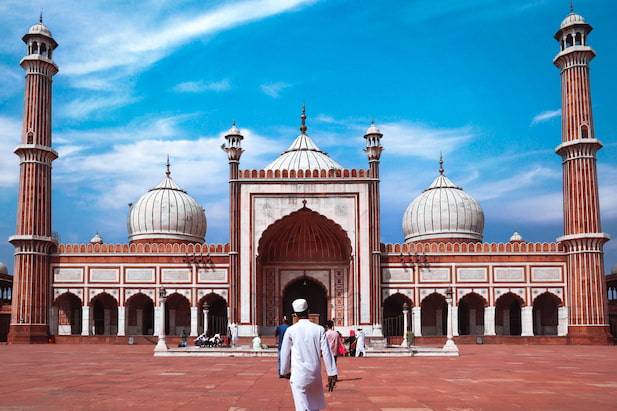 You might have expected Jama Masjid in Delhi to be on top of this list. It is the largest Mosque in India and is also one of the most popular Mosques in the world.

It was constructed by Mughal emperor Shahjahan in 1644. It has three large gates as well as many minarets, arches, and domes, all of which are beautifully and meticulously decorated. The entire structure is made of red sandstone and white marbles.

Moreover, the floor of the entire Mosque is decorated with black and white ornamental marbles, which give the resemblance of a Prayer mat. The entire structure is more than 260 feet in height and about 90 feet wide. It is surrounded by many other popular historical landmarks of the city.

The Taj-ul-Masjid, which translates to ‘the crown of Mosques’, is one of the largest Mosques in all of Asia.

It is located in Bhopal and was constructed under the supervision of Nawab Shah Jahan Begum until her death. As she died before the construction was completed, this project was carried on by her daughter Sultan Jahan Begum.

The Mosque has 18-story high octagonal minarets with domes on top as well as a double-storeyed gateway that has four archways and nine openings to the main Prayer hall. The entrance gate of the Mosque was inspired by Syrian Mosques and is decorated with ancient motifs taken from the same. 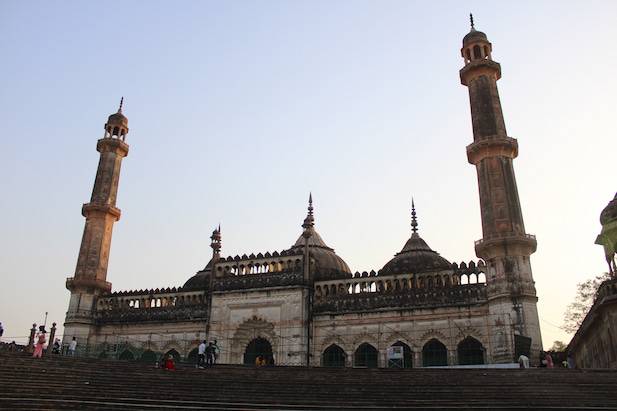 The Bara Imambara in Lucknow is more than just a Mosque. It is easily one of the most fascinating buildings in India, if not the entire world.

It was built by the Nawab Asaf Ud Daulah of Awadh and has a large arched roof over central halls. The entire Mosque was constructed with small bricks and lime plaster. An interesting fact is that the construction of this Mosque used no wood or metal.

Moreover, the Bara Imambara is the largest unsupported structure in the entire country. It also has a large bhool bhulaiya or maze that has more than 1,000 passages, around 500 identical doorways, and a number of staircases.

The Makkah Masjid in Hyderabad is one of the oldest Mosques in India. Constructed under the supervision of Muhammad Quli Qutb Shah, it is believed that the bricks used in this Mosque were made of soil from Mecca.

The Makkah Masjid has four minarets, each of which has a small dome on top. The Mosque also has arched galleries inscribed with Quranic verses, octagonal balconies, and is decorated with frescoes and floral motifs.

This architectural wonder took 77 years to complete. Moreover, the Makkah Masjid is located close to other places of interest like Chowmahalla Palace and Laad Bazaar. 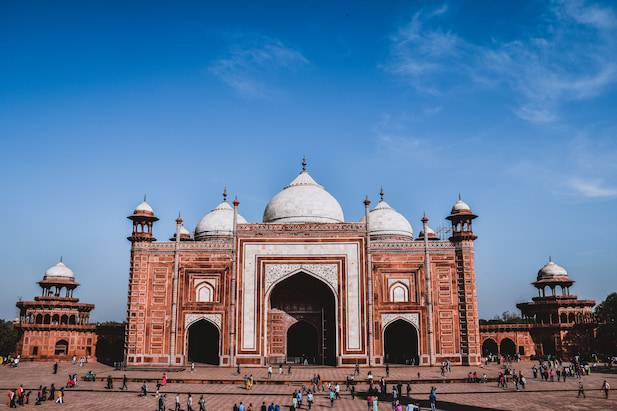 The Jama Masjid in Agra was built in 1648 by emperor Shah Jahan for his daughter Jahanara. This Mosque has an interesting architectural design – it has a rectangular shape with a large dome connected to two square chambers with smaller domes on top.

Moreover, the large dome on top of the Mosque is shaped like an inverted lotus. As the Mosque was constructed over a raised platform, there are five arched entrances that lead you into the main courtyard.

Visited by people from all over the world, the tomb of Sufi saint Sheikh Salim Chisti is also found within the complex of Jama Masjid.

The Jamali Kamali Mosque and Tomb is located in the Mehrauli Archeological Park in Delhi, close to the Qutub Minar. Built during the 16th century, this red sandstone Mosque is placed between the two tombs of Jamali and Kamali.

This Mosque is a sight to behold with its large courtyard, garden area, and Prayer hall. It is considered to be one of the finest examples of Mughal architecture. The walls inside both, the tombs and the Mosque are decorated with Quranic inscriptions.

Moreover, the interior of the Jamali and Kamali tombs have been decorated in such a manner that it gives the feeling of “stepping inside a jewelry box.”.

The construction of the Jama Masjid in Ajmer, Rajasthan was done under the supervision of emperor Shahjahan in 1638. This Mosque was built as a symbol of gratitude as well as the celebration of his victory in the battle against the Rana of Mewar.

The Jama Masjid in Ajmer is an architectural wonder. It was built with striking white marbles that have Persian inscriptions engraved in them. The Mosque is divided into three parts – which include the star-shaped Prayer hall. Moreover, this Mosque is located near other monuments like the shrine of Khwaja Muinuddin Chishti.

We hope that after reading this article, you are as excited to visit these Mosques as we are. In a place like India, you’ll be experiencing much more than just being in a Mosque – you’ll always be surrounded by the bubbling culture and warmth of these spiritual places!

Download our HalalTrip app to always know where the closest mosques and Halal restaurants are, available on Google Play and the App Store!