What better destinations to explore and rave about to a group of friends at your next dinner party than your previous travels that were off the beaten track? This world brims with undiscovered locations to make even the gutsiest explorer faint in dazed joy. With beautiful islands to neglected deserts and wildernesses abounding with untamed life. A nomad’s dream come true! If you are eager to set out on the road less traveled in 2022 this list of locations will be far from disappointing! 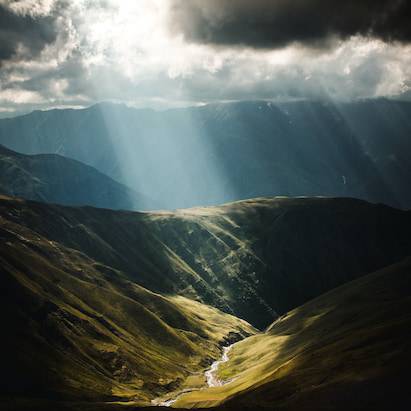 Gone are the days where Georgia was once known as one of the most rural countries, this up and coming attraction has unique and one of a kind touches of European culture and is a spot where tourists are welcomed with open arms by the locals. Not only is Georgia famous for its traditions, renowned history, scenery, greenery, and breathtaking mountains, they are also well known for their culinary specialties which would leave a tourist drooling over their local varieties!

If you are keen on understanding the diverse history of Georgia, make sure you pay a visit to Stamba Hotel in Tbilisi which showcases the industrial finery of the Soviet-era publishing house which is now a tourist attraction for someone who wishes to go back to the past and view historic architecture at its finest. Make sure to include a trip to Savannah as well – a city is also known for its rich history, art and design, and beautiful greenery.

When in Japan, the Tohoku region is a must-visit! Located towards the north of Tokyo, tourists will find this location quite the opposite compared to the hustle and bustle of the Tokyo lifestyle. Tohoku is more laidback, scenic with spectacular views and Instagram worthy pictures are a guarantee! You could opt for a hike through their forests or just a stroll along their coastline line while taking in the fresh air.

Historic Villages of Shirakawa-gō and Gokayama

Another attraction to add to your itinerary would be the Historic Villages of Shirakawa-gō and Gokayama in Shirakawa. The most famous and noteworthy element of these villages is their Gassho-style farmhouses which have thatched-roofing that have been constructed in such a manner that it would be able to shed snow easily as the valley these villages are located in is a mountain region which is prone to snowfall. The Historic Villages of Shirakawa-gō and Gokayama portray a sense of traditional Japanese architecture.

Fun Fact - The Historic Villages of Shirakawa-gō and Gokayama are known as one of Japan's UNESCO World Heritage Sites.

Living in a place where it is immensely cold and looking for an escape? St. Petersburg in Florida will solve your problems! Sunny throughout the year, this location will allow you to get rid of the bulky winter wear that is weighing you down and finally allow you to pull out your comfortable Summer wear and work on your tan! Thanks to their abundance of white-sand beaches, you and your loved ones can frolic in the water and build sandcastles! Whilst at St. Petersburg you can feast on their local cuisine and sign yourself up for some additional activities like nighttime paddleboarding or take a tour through their museums.

"Hamptons of the South”, or more famously known as the Emerald Coast and located on the Gulf Coast, is another spot you can visit and find a plethora of beaches, parks, and forests that you can visit with your friends or if you are even traveling with your family. Jaw-dropping scenic views will surround you! 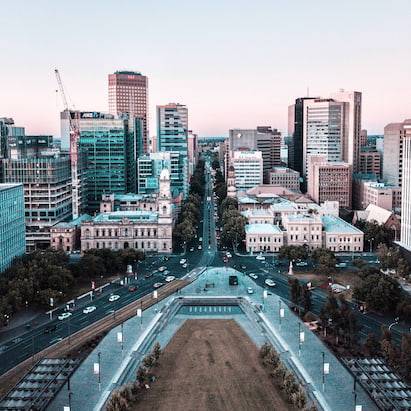 Unappreciated for the gem that it is, Adelaide should be considered as a definite stop for anyone traveling to Australia. Considered to be the fifth city to hold the most population, Adelaide should be visited for its arts scene, inspiring architecture, and chic cafes and restaurants spread across the city.

Hobart, which in the capital of Tasmania, is also a well-deserved location to visit in 2021 to gain a culture fix at the Museum of Old and New Art and their wildlife sanctuaries such as the Bonorong Wildlife Sanctuary which is a 30-minute drive from the city itself. If National Geography and Animal Planet excite you, this wildlife sanctuary will call out your inner animal lover when you get to witness firsthand, animals like the kangaroos which are Australia’s most famous animals and you will also get to witness the island's most famous – the Tasmanian devils!

With an approximate altitude of 11,500 feet and overlapped by four mountains - The Great Himalaya, The Ladakh, The Zanskar, and The Karakoram – Ladakh is a destination that will make your jaw drop at first glance thanks to its breathtaking views, Buddhist heritage, and tranquility. When in Ladakh, you can visit the Tibetan Buddhist monasteries which are constructed into the Indian Himalayas. Be wary as the climb through the high altitude could be dangerous! Nevertheless, it will be one of the most rewarding experiences of your life!

PS – try to witness a game of Ladakhi Polo when you are there.

Another must-visit location in India is a gem located off the coast of West India - the Andaman Islands. This destination is best known for its sparkling waters, marine life, tropical jungles, and islands which provide nothing short of serenity. After experiencing the hustle and bustle of the normal Indian lifestyle, the Andaman Islands is the perfect location for you to unwind and remain stress-free.

Recently named a UNESCO World Heritage Site, Ahmedabad is also quite a commendable location to include in your places to visit list when in India. The design and olden day structures and architecture are still prominent and evident in some of the buildings and monuments of Ahmedabad.

Gaining inspiration from their ancestral roots, Puglia provides its visitors a view of their authentic Italian customs which is amalgamated by their past influences - Norman, Spanish, Greek, and Byzantine. Puglia also consists of pristine shores, breathtaking views, and the best of olive oils! If you are looking to go all out and are traveling with your significant other, there are modern and luxurious accommodation options that you could opt for such as Borgo Egnazia which would be perfect and would cater to all your requirements. When in Italy you can also take a stroll through one of their crystal-clear beaches when you go to Polignano a Mare, Torre Canne, and Gallipoli.

PS – Make sure to try out orecchiette pasta when in Puglia! 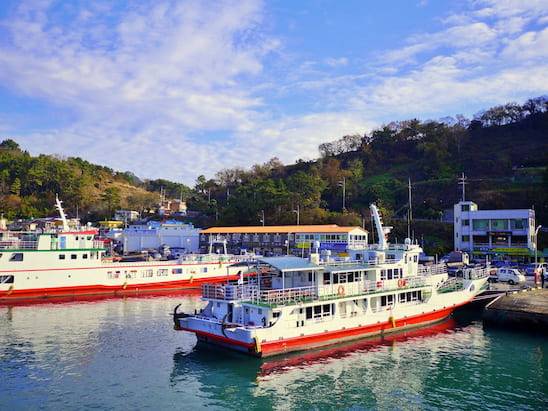 The picturesque city of Tongyeong incorporates a jaw-dropping mixture of islands. These islands come with a sight more remarkable than the previous one.

Hallyeohaesang National Marine Park in South Korea would be an excellent attraction to visit if you are traveling with kids. This Park displays quite an assortment – from fowls to bugs to plants.

From its period of being just boulders of rocks, Oedo Botania has now being developed and constructed into a botanical garden by a person named Lee Chang-ho and his wife. This heaven on earth garden is another noteworthy attraction that tourists can visit in 2022.

PS – To get to Oedo Botania you will have to use the ferry as your mode of transport.

Your journey to Canada would not have been a successfully fulfilled one if you do not stopover at one of the most populous cities – Toronto! Toronto has something to offer for every one of its visitors – from the upcoming film industry to the craze for shopping sprees and an overflowing abundance of food at every nook and cranny of the streets of Toronto serving the most delectable varieties!

If you get the chance to visit Alberta do, try to stop over at Calgary too. Calgary is a multiethnic city located in the base of the Canadian Rockies. However, Calgary has more to offer than just the renowned mountains. You could head over to the local Calgary Farmers' Market, witness the rodeo event which takes place once a year, a 10-day event called the Calgary Stampede or even check out the exhibits at the Glenbow Museum.

In Tsitsikamma National Park located in South Africa, you can get your adrenaline pumping by swimming, hiking, biking, and even abseiling (rappelling). This location is a call out for all the adrenaline junkies out there! The park is also famous for its dolphins and otters so keep an eye out for them because you sure do not want to miss out on such an opportunity!

If you are in South Africa and if you have a liking for sandy seashores, head over to Durban which is approximately an hour away from South Africa’s biggest city – Johannesburg. Durban is well known amongst surfers due to their beaches and it also houses one of the world’s largest swing! The Big Rush was named the world's tallest swing by the Guinness Book of Records in 2011. 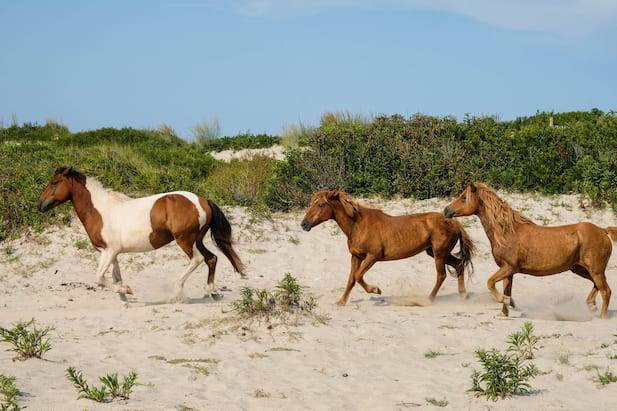 Assateague is a 37-mile long strip of barrier island shared by Virginia and Maryland in the United States of America and is known for its bubbly residents, for their campsites and bike paths as recreational activities. Assateague Island, Virginia, and Maryland is most famously known for providing a home to more than 300 wild horses that roam on their beaches and coves. Rumor has it that the horses were brought into the island from a shipwreck in the 18th century.