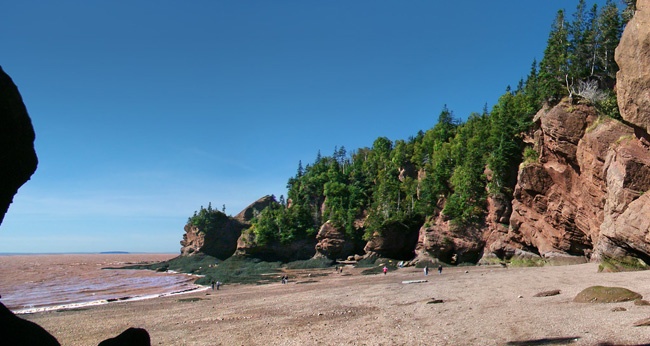 A must-visit attraction in Canada, the Bay of Fundy is known for having the highest tides on Earth and is considered to be one of the most unique places that every traveler to Canada should visit. A number of things make the bay a must-try experience in Canada; this article explores why it is worth a visit.

Why Visit Bay of Fundy?

In addition to having the world's highest tides, the Bay of Fundy is extremely popular for its exquisite coastal rock formations and tidal effects. Apart from the beautiful scenes that the area creates, it also serves as a feeding ground for a number of migratory birds and is also home to the endangered Right whales, dolphins, porpoises and seals.

The bay is located between the provinces of New Brunswick and Nova Scotia, on the East coast of North America. The whale watching season of the Bay of Fundy lasts from May to October. A number of companies offer whale watching tours in the ecozone of Fundy Aquarium. This ecozone is located at the mouth of the Bay of Fundy where it meets the Gulf of Maine in the Atlantic Ocean.

Over the years the tidal activities have created some unique landscape formations. These tidal waves have crafted dramatic cliffs and caves along several parts of the Bay of Fundy. There are several trails too that you can explore while visiting the Bay of Fundy. St. Martins in New Brunswick is where you can see sea caves and also enjoy beach access. The Fundy National Park of Canada, in Alma New Brunswick is also good for hiking and enjoying numerous activities. The Bay of Fundy has several UNESCO designated sites including the Joggings Fossil Cliffs. This is the site where you can find a complete record of fossils from the Coal Age.

Mosques and Halal Food Near Bay of Fundy