8 Most Popular Cuisines of West Sumatra You Shouldn't Miss

The delectable cuisine from West Sumatra is known for its unique traditional flavors and spicy tastes.

So, if you're planning to visit Padang or Bukittinggi City, you just have to try these 8 most popular and flavorful street meals. 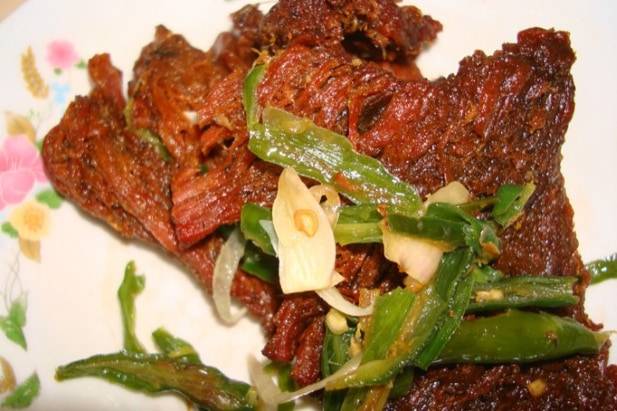 The name Dendeng Batokok comes from the preparation process, which includes the beating of beef. In the local language "batokok" translates to "beaten", and "dendeng" to "beef slices". The method of processing beef slices ‘batokok’ makes the texture of the meat soft and savory, sour and spicy.

You can find Dendeng Batokok in every Padang restaurant all over the archipelago. But to get the most authentic taste and flavors we recommend you get them at the place of origin which is Bukittinggi or another city in West Sumatra.

Another favorite cuisine from Bukittinggi City is Ayam Pop. Usually served with cassava leaves, long beans, and some traditional chili sauce. The main ingredient of Ayam Pop is the fried chicken which has a distinct pale white color because of the process of frying after being boiled.

For seasoning, it uses some spices including garlic, shallots, lime, bay leaves, galangal, and salt.

After being seasoned, the Ayam Pop is boiled with coconut water and chopped garlic. Then, the chicken is fried in hot oil so that it is cooked perfectly and creates a crunchy texture.

Sambal served with chicken pop is made from finely ground chilies, tomatoes, and shallots and then cooked to taste, not too spicy but slightly acidic. This dish is best served with a plate of rice!

This dish comes from one of the restaurants in Bukittinggi, namely the Family Benteng Indah Restaurant which has been established since 1963.

In the beginning, this restaurant only sold dry fried chicken. One day when orders started to pile up, the owner of the restaurant boiled a large amount of chicken in coconut milk and minced garlic and then fried it briefly so that customers wouldn't have to wait too long.

The dish become popular because of how different it is from fried chicken in general and has the distinctive aroma of coconut water and a more savory taste.

This dish later became a favorite food for Chinese residents in Bukittinggi at the time since the pale white pop chicken looks similar to Hainanese chicken which is a typical Chinese boiled chicken dish.

You can grab the original Ayam Pop from Rumah Makan Family Bintang Indah which is located just 5 minutes' walk from Pasa Ateh, Bukittinggi. 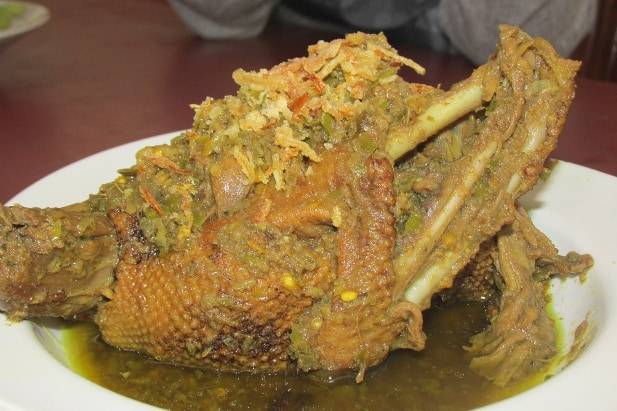 The main ingredients of Itiak Lado Mudo are ducklings mixed with green chili sauce. This curry made from green spice chili has savory, strong, and deliciously spicy flavors. The duck meat is submersed in the green chili sauce. Together with the cold air from the Ngarai Sianokan canyon nearby, it makes for quite an experience!

Next on the menu is the legendary Samba Lado Tanak. It is a bit of a rare find in Padang restaurants in West Sumatra or in other places.

Samba Lado Tanak is mostly cooked by the Bundo Kanduang or the females of the ethnic group in their homes around Tanah Datar Regency.

Samba Lado Tanak is made from ground chilies, cooked coconut milk, anchovies, jack fruit, and boiled eggs, mixed with traditional spices then cooked in a cauldron with fire from wood coals.

Samba Lado Tanak is a traditional must-cook cuisine for the Minang ethnic group. Samba Lado means sambal made from chili. It could be red or green curly chilis. The redder the chili sauce is, the more flavorful and tasty it gets.

Because it is unique and difficult to find in Padang restaurants, it is likely that not everyone in West Sumatra is familiar with this cuisine. However, you must try this cuisine because it is the best cuisine, especially for spicy food lovers. 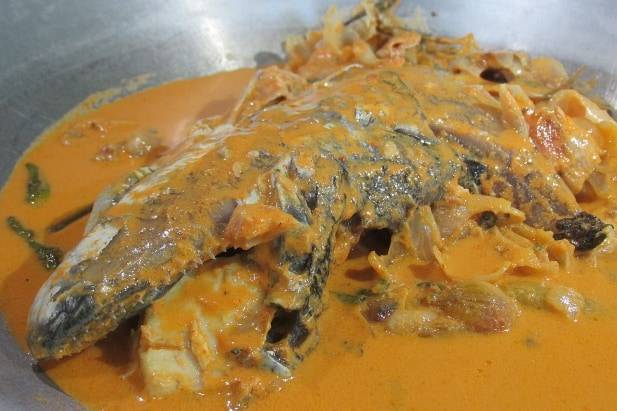 The main cuisine of the Tiku Coast, Tanjung Mutiara District, and Pariaman City is Gulai Kapalo Lauak. The Gulai Kapalo Lauak is made from fresh sea fish and is cooked with quality spices and thick coconut milk, giving it a distinct and delicious flavor. The flavor has been handed down from generation to generation.

The Gulai Kapalo Lauak is served in the middle of a thick yellow coconut milk sauce, topped with a few whole pieces of cayenne pepper and yam shoot leaves.

There is no difference between the Gulai Kapalo Lauak curry and the other West Sumatra curry because they both contain the same ingredients such as galangal, ginger, turmeric, chili, kandis acid, turmeric leaves, and lemongrass stalks.

But you might ask "what makes this cuisine so popular? What is the key to delectableness?" Well, this is due to the hand processing that combines this curry spice with the appropriate spices.

The spices must be grounded by hand, the seasoning for this fish head curry is fresh, rather than processed or ground spices. They use fresh fish in addition to fresh spices.

Typically, the fish used by restaurant owners in Pariaman are the catches of fishermen in Pariaman that are sold directly to restaurants, and the nutritional content of the fish is high and guaranteed.

Goreng Baluik Balado originated in Payakumbuh City, West Sumatra. This dish is made from deep-fried eel meat mixed with a variety of spices.

Goreng Baluik Mamak is not far from the famous market Aua Kuniang in Payakumbuh. It will take you 20 minutes to get to your yummy Goreng Baluik Balado.

Palai Bada is made with wet anchovies, grated coconut, and a variety of spices including turmeric leaves, lemongrass leaves, galangal, tamarind, and others.

This dish is prepared by wrapping it in banana leaves and pricking the ends with a stick before grilling. It has a spicy but tasty flavor.

This food is very popular in Padang and among the Padangnese people. You can easily find this meal because there are so many restaurants that serve Palai Bada as one of their menu items.

The price is also affordable, ranging from IDR 5000 to 10,000 depending on the size of Palai Bada.

If you want to try this cuisine, you can buy Palai Bada at Kedai Lompong Satu/Palai Bada in Padang, the capital city of the province. 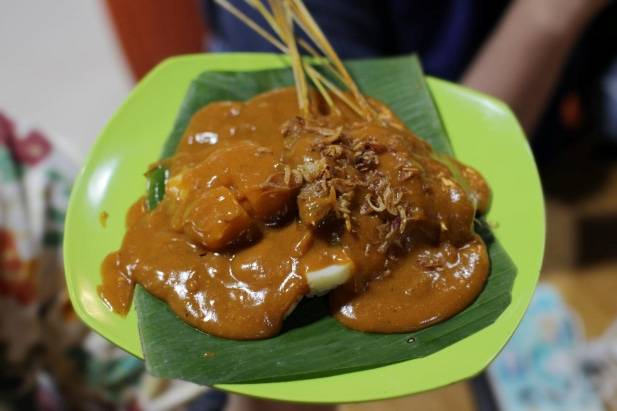 Sate Padang's main ingredients are meat, tongue, or offal from any type of beef or chicken meat, a thick peanut sauce, and a lot of chilies.

The taste of the two types of satay is also distinct, and Sate Padang combines the flavors of the two kinds of satay variants.

Sate Padang is made with fresh meat, herbs, and spices such as 19 different ground spices (shallots, garlic, turmeric, ginger, and lemongrass) combined with different chilies.

The Sate Padang is only grilled when ordered, and it is usually served with Minang's signature balado chips. Sate Mak Syukur Padang Panjang, Sate Dangung-Dangung, and Sate KMS are the most popular Sate Padang Restaurants.