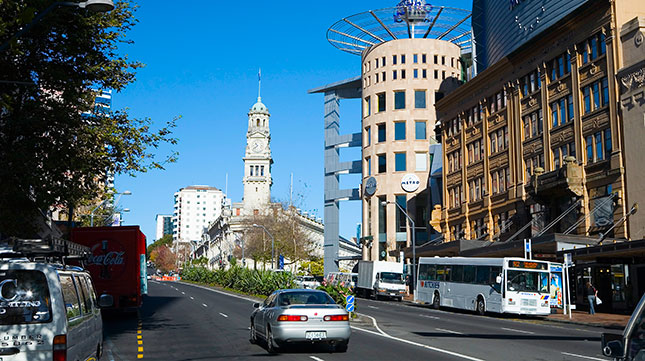 New Zealand has always captivated travellers with its breathtaking natural scenery. Attractions in the country range from beautiful pristine beaches to lush rainforests to majestic mountains capped by snow. Facilities for Muslim travellers will also be readily available to ensure a fantastic visit. Read on for a list of recommended places to visit when travelling in New Zealand.

The vibrant city of Auckland is one of the most popular destinations in New Zealand. The city is home to more than half of the country’s Muslim population and Muslim travellers will be able to find many Halal restaurants and prayer facilities across the city. Kebab City, Zezenya, Ayutthaya Thai Food and Salateen are amongst some of the popular Halal restaurants in Auckland and travellers who require prayer facilities may visit a few of the city’s many mosques such as Al Maqtoum Masjid, Al Falaah Islamic Centre, Glen Innes Islamic Centre and the Auckland University Masjid. There will also be plenty to do in the city, with attractions ranging from unique volcanic landscapes to theme parks and leisure parks to memorial museums.

Wellington – the capital of the country – is another excellent destination in New Zealand for Muslim travellers. Due to the relatively large Muslim population residing in the country, access to facilities such as Halal restaurants and mosques can be easily found. Food Corner Limited and Mughlai Mer Curries are a couple of the restaurants in Wellington which serve Halal food. Often referred to as the Windy City, Wellington is popular for its numerous shopping areas, cultural attractions, stunning harbour views and its beautiful wildlife reserves. It also offers beautiful stunning beaches and bays and has something to offer everyone – be it surfing or scuba diving or a quiet time with the family.

Located on the east coast of New Zealand’s South Island, Christchurch is a multicultural city which is home to a sizable Muslim population. It is also famously dubbed the ‘The Garden City’ and is home to over 700 large parks and public gardens. The Orana Wildlife Park is a must-visit spot when travelling in Christchurch and is perhaps the highlight of the city. Stretching across 80 acres of land, the park is located just 15 minutes away from the Christchurch Airport and offers a unique way to observe the flora and fauna of the area. Christchurch also offers several activities such as bungee jumping, mountain biking and hot-air ballooning and will offer plenty to do for adventurous travellers.

The beautiful town of Queenstown is often called the world’s adventure capital and is a sought-after tourist destination in the country. Due to its small Muslim community and the growing number of Muslim tourists visiting the city, sufficient facilities will be available in Queenstown for Muslim travellers to experience a convenient stay. In addition to its beautiful scenery, Queenstown also offers several adventure activities as well as a wealth of luxurious shopping opportunities.

Other prominent towns that are worth visiting when travelling in New Zealand include Rotorua, Taupo, Dunedin, Hamilton, Napier and Nelson. Halal food and prayer facilities for Muslim travellers may not be available at some of the smaller towns in the country but travellers who plan well ahead will be able to experience an enjoyable visit.