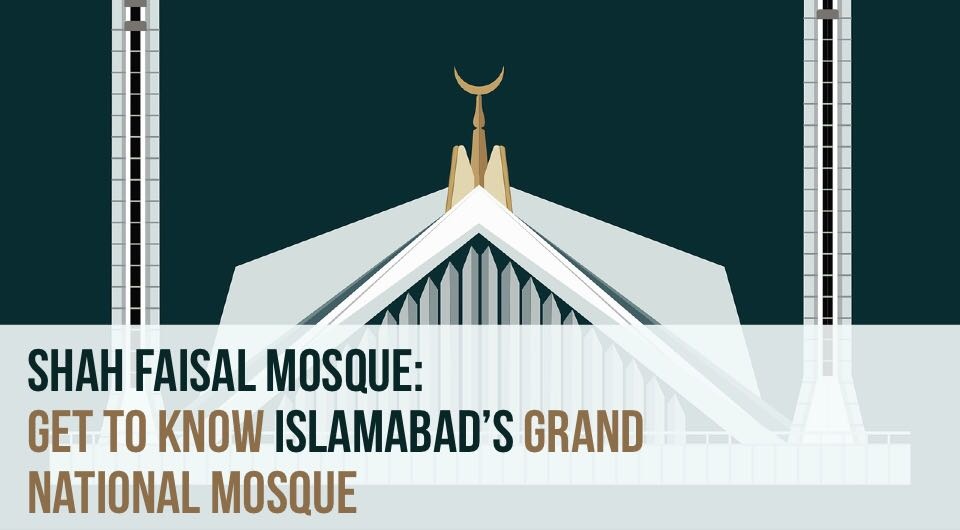 Located in the city of Islamabad, the capital of Pakistan, Faisal Mosque (also known as Shah Faisal Mosque) is set in front of a stunning backdrop of the magnificent Margalla Hills. It also functions as the National Mosque of Pakistan. This iconic building is not just a famous landmark in Pakistan as it dominates the Islamabad skyline, but an important one in the Islamic world, religiously and architecturally.​

The building of the mosque was completed over a period of 10 years from 1976 to 1986. The total cost of construction amounted to about US $120 million dollars, most of which was funded by King Faisal bin Abdul Aziz of Saudi Arabia, whose name was later given to the mosque.​

The mosque was built on an elevated piece of land and has been planned strategically that is can be viewed from most places in the city. But, one has to be up-close to truly take in the beauty and magnificence of Faisal Mosque, which is why a Halal trip to Pakistan will not be complete without a visit here!​

The Architecture of Faisal Mosque

An international competition was held to select the design for the mosque, which received over 40 applications from 17 different countries. It was Turkish architect Vedat Dalokay's design that was ultimately chosen. His unconventional design was inspired by the Bedouin tent in the middle of the desert. As such, the main structure of the mosque is shaped with sharp angles, like a tent, and not the traditional domed structures of Islamic architecture that most mosques around the world follow.​

The outside of the mosque is made up of 8 sides and consists of 4 sharp minarets that border its corners, each of them standing at 88 meters tall. Each of these minarets is known to be the tallest in South Asia. A popular myth states that the ever-paranoid American CIA wanted to inspect them in fear that they were disguised missiles – which, of course, they weren't.​

The roof on the interior of Faisal mosque is about 40 meters high, giving the already massive hall a feeling of endlessness. Faint sounds of the Qur'an being recited echo off the walls of white marble and mosaics. These walls are adorned with golden calligraphy by famous Pakistani artist Sadequain, with large chandeliers hanging from the ceiling (a massive Turkish gold-colored one hangs in the main hall). The ceiling itself is a piece of art, designed with sharp lines and grooves.​

Designer Vedat Dalokay was presented the Agah Khan Award for Architecture on his exceptional and unique design of Faisal Mosque. It is revered as one of the best examples of modern Islamic architecture in the world.​

When General Muhammad Zia-ul-Haq, the former president of Pakistan, passed away in 1988, his funeral, which was one of the largest in Pakistani history, was held at Faisal Mosque. A mausoleum dedicated to him was then installed at the site adjacent to the mosque. People can stop by and offer prayers for the dead here.​

The Largest Mosque in the World

At the time of completion, Faisal Mosque was the largest mosque in the world, covering an area of about 54,000 square feet. The main hall of the mosque is said to have the capacity to accommodate 100,000 worshipers, and 200,000 can pray in the areas including the surrounding courtyards and porticoes.​

Faisal Mosque held this title until 1993, when it was overtaken by other mosques in size and capacity, namely by the two main mosques in Saudi Arabia (Masjid-Al-Haram, and Masjid-An-Nabawi), and the Hassan II Mosque in Casablanca, Morocco.​

Today, it still remains as the largest mosque in South Asia, as well as the fourth largest in the world.​

Faisal Mosque is one of Pakistan's most popular tourist attractions, and visitors both Muslim and non-Muslim are welcome here. There is no entrance fee (except to store shoes and other valuables), but guests are welcome to donate as much or as little as they want to the mosque's fund.​

Of course, as this is a religious building first and foremost, there are certain rules that visitors must adhere to. You must make sure to remove your footwear before entering, and that you are dressed well (long, loose-fitting clothes, and a head cover for women).​

Eating inside the mosque is prohibited, but not explicitly so in the courtyard and surrounding open areas. You should also be on your best behavior, and refrain from making loud noises or acting inappropriately. The main prayer hall is only open during prayer times and is the only area closed to non-Muslims. It is also the only place where photography is frowned upon.​

There is a separate prayer hall for women, which is decorated with zebra marble imported from Greece. Other than the prayer halls, the mosque houses a large ablution area, lecture hall, library, cafe, museum, and a small gift shop near the entrance. There is also a university here, educating about 700 students.​

The areas surrounding the main structure consist of courtyards and porticoes. The entrance has a circular pond, which then leads to a larger pond and fountains, as well as the stairs that lead to the main prayer hall. The entire area is surrounded by lush greenery, and of course, the Margalla hills stand tall and proud behind.​

Getting to Faisal Mosque

Public transport is available from most parts of the city to Faisal Mosque. If you are traveling from outside the city, you can take an intercity bus to 8th avenue in Islamabad, and then take another bus or a taxi to the mosque. Taxi rates are pretty inexpensive, the fare would be roughly Rs. 80 from the Blue Area.​