Dive Deep into the Historic "Silk Road" of Samarkand, Uzbekistan

Looking for a destination to visit for your well-deserved holiday or searching for something different such as a heritage-themed journey? Samarkand of Uzbekistan might be the perfect destination for you! As one of the most important cities during the Silk Road era, Samarkand is a city that is rich in history especially related to the development during the era. The city itself is more than telling the story of the Silk Road, its existence was discovered way back in the paleolithic era, and has been a silent witness of human development ever since. Samarkand would then also be one of the centers of Islamic and Ummah revival during the period of the Timurid Renaissance, and continue in preserving traditions, history crafts, and its wonders up until today. With a city that is full of history of the past, Samarkand is the perfect city for you to visit and experience the past during your trip. Here are attractions that you should visit in Samarkand: 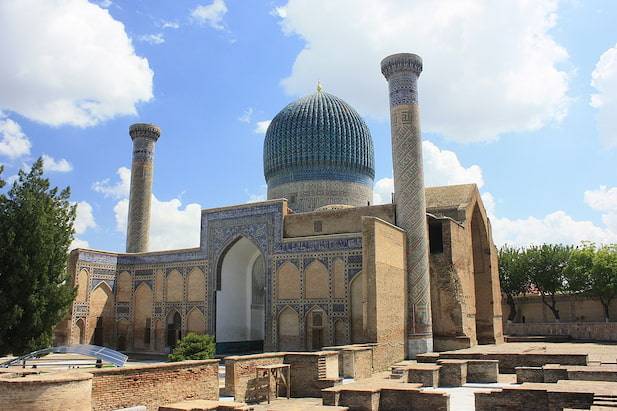 Located in Samarkand, Gur Emir Complex is historically one of the most influential architecture in the city. Gur Emir is an architectural complex that serves as a tomb for Amir Timur of the Timurid Empire, his sons, his grandsons, and Timur’s teacher Sayyid Baraka. The complex was built in the 14th century but was restored later on due to the damages it faced. At the time, the complex was built with the intention to bury his beloved grandson, Muhammad Sultan. However, due to the passing of Timur on a military expedition and the access to his designated tomb in Shahrisabz was blocked, he would then also be buried in the complex instead. Hence, the complex would also function as a family tomb on the upcoming years for the descendants of Timurid Empire.

Upon arriving at the complex, you’ll be greeted with a grand entrance portal that is decorated with beautifully carved bricks and mosaic. The complex as a whole retains Persian-styled architecture, where you’ll also be able to see the mausoleum, foundations of the madrasah, khanaka, and one of the remaining minarets. The Mausoleum has an azure fluted dome, and the walls are decorated with blue and white tiles that are shaped into geometrically shaped ornaments. Upon entering the mausoleum, you’ll be able to see high ceilings that are beautifully decorated with muqarnas and marble stalactite ornaments, walls that are decorated with paintings and onyx slabs, and headstones that function to indicate the location of the actual tombs in the main chamber. Aside from the main complex, you’ll also be able to visit other monuments nearby which include Ruhabad and Aksaray mausoleum.

The Al-Maturidi is a complex that is created as a mausoleum for the honored Abu Mansur al-Maturidi. He was born in 870 and is a theologian, scientist, and founder of kalam and fiqh. His contribution created the doctrine and code of behavior of a Muslim that believing and following Allah’s faith as a Muslim, should be based on a reason, not because it is a given situation or caused by blindly following the authorities and the belief of the majority.

During the time of his passing, the Imam was buried in Chokardiza cemetery alongside other scholars and theologians. His mausoleum and tombstone would remain there until it was destroyed between the 1930-1940s. In order to honor his contributions to the study of Islam, the government of Uzbekistan would later hold international conferences and built the now well-known mausoleum in 2000, 1130 years after his birth.

The mausoleum stood high and was topped off with a ribbed blue dome. It is also completed with ornaments, mosaics, and arches that are created by plaster and marble on its exterior. Suitable for his great teachings and contribution to Islam.

Shahi Zinda is a necropolis that includes mausoleums and other ritual buildings. Originated during the 11th century, the complex expansion ended just by the 19th century with a grand total of over twenty buildings. The complex name Shahi Zinda comes from Uzbek/Persian which means “the living king”. The story of how the complex got its name originated from the arrival of Qutham ibn Abbas, one of the Prophet’s SAW cousins, to Samarkand in order to spread the teachings of Islam through the Arab invasion. He then lived through protests, murder attempts, and beheadings due to his faith, but received countless miracles and continued to live on in spreading Islam. Hence the complex name comes from the living king and his attempts on unifying the lands through Islam. Shahi Zinda would then be the resting place of Qutham bin Abbas.

The complex consisted of three groups of structures that are mostly based on levels time of construction, and connected by what is called by chartak. The complex is built in a Timurid style where each group from each century retains a similar architectural language. The details, colors, and the dome are structured with the same general composition. Entering the complex, you’ll be passing an entrance gate that is built in the Ulugbek era. Within the perimeter, you’ll be able to see the Qutham ibn Abbas main complex which includes a mausoleum and a mosque, the upper group of mausoleums which is first constructed in the 1340s, and the middle group which consists of the Amir Timur’s family mausoleum in the 15th century. In the lower group, you can also see the mausoleum for Kazi Zade Rumi, a scientist and astronomer, which is accessible through a multi-step staircase.

A fan of astronomy and searching for something unusual and different in Samarkand? Ulughbek Observatory is the perfect destination to visit during your trip! The observatory marked the start of modern astronomers and paved the way for today’s success in astronomy, where one of the astronomers includes Ulughbeg himself, a Timurid Sultan of the era. The observatory is deemed as one of the most outstanding historic observatories as it was created and used without optical instruments, viewed with bare eyes, and yet is able to locate thousands of stars. The calculation of the revolution of the Ulughbek Observatory is also deemed comparable to modern instruments, missing just a second per year. The exact year of completion of the observatory remains unknown, but one thing for sure is that it contributes a lot to the astronomical knowledge in the middle age, as the observatory is often cited in older texts and books.

Different from other observatories, Ulughbek is built partially undergrounds due to the size of the instruments. The building consists of three stories with the first floor being housing and the rest including the rooftop functions for observations. However, visitors of the observatory are only able to see the entrance, foundations, and part of the observatory, this is due to the declining use and destructions during the 15th century. Resulting in the destruction of scientific centers and libraries that contain valuable bits of knowledge. During your visit, make sure to visit the museum nearby as it is built to commemorate the observatory. It also shows the surviving manuscript of the star charts that are published by the observatory on 1437, Zij-i Sultan. Other than the original manuscripts, you are also able to see printed editions, astrolabes, instruments, and the miniature of the observatory. 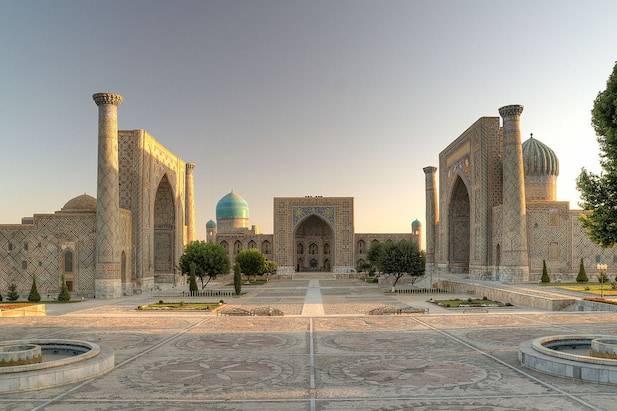 If you’re wondering how Muslims of the middle age lived, Registan Square could summarize the whole experience. Registan Square was the center of the ancient city of Samarkand during the Timurid Reinassance. In the past, the square functioned as a public square where royal proclamations and executions are held.

The square is surrounded by three madrasahs which include Ulugh Beg Madrasah, Sher-Dor Madrasah, and Tilya Kori Madrasah, built during different times but maintaining the same Islamic architecture style. Each of the madrasahs is completed with an entrance arch, mosaics, and ornaments. While Ulugh Beg and Sher-Dor are flanked by tall-standing minarets, Tilya Kori is completed with a mosque. Within the perimeter, you’ll be able to visit the Mausoleum of Shaybanids and the Chorsu trading dome. 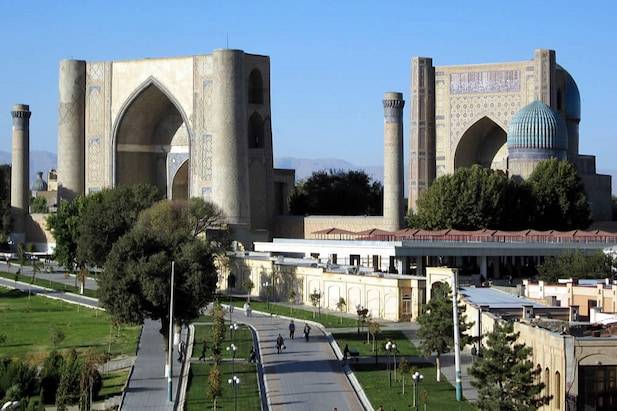 Looking for a place to pray? End your visit by spending the extra time by praying and visiting Bibi Khanum Mosque. During the 15th century, the mosque was considered a masterpiece as it is the most magnificent and largest mosque. Compared to the era, the humongous size of the mosque comes with its problem especially due to the structural integrity. Due to the rushed nature of the construction and the much delayed needed restorations in the 16th century, a big part of the mosque would later collapse on 1897 due to the gradual deteriorating condition combined with an earthquake. From then on a series of restoration and reconstruction has been done to return the mosque to its former glory.

In earlier manuscripts, the mosque was built between 1399 and constructed in a Muslim medieval style. The mosque follows a courtyard shaped with the outer walls measuring 167 meters in length and 109 meters in width. Entering the mosque through the portal would then lead to the courtyard section of the mosque. The mosque also houses a dome that is placed 40 meters above the base of the mosque and is accompanied by other two domes on the other side of the mosque. The mosque also implements the classic four iwan scheme, with 8 minarets in total. The mosque is so big that it could fit the whole male population for Friday prayers in Samarkand. You’ll also be able to see a huge Quran stand in the courtyard that is created by marble, a witness of the ambition during the Timurid Renaissance.

There you have it! These are attractions that you must visit during your trip to Samarkand and make your trip much more worth it. Download the HalalTrip Mobile App to find all the mosques and halal restaurants nearby and have a better travel experience as a Muslim.