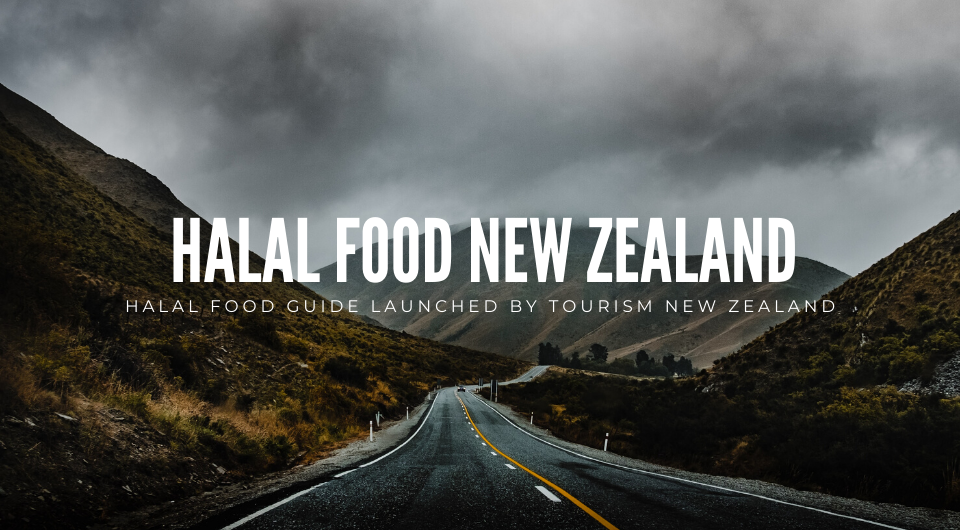 Breath taking landscapes, icy cold mountains, crystal clear waters, greenery as far as the eye can see, all these phrases would never be sufficient to describe the natural beauty New Zealand comprises of. Due to its natural features the country is an iconic location for film makers, to add that beautiful zing to movies. Well if directors all over the world fly thousands of miles due to the indescribable beauty of this country, it is without a doubt that New Zealand is a country that must be visited by any travel junkie.

For Muslim travellers however the most tedious task in visiting a country with a Muslim minority in the community would be finding locations to obtain halal food. New Zealand is a country very well known for its tender and juicy roasts, barbeques , pies and mouthwatering desserts. It would be such a pity if any Muslim traveller was to visit this beautiful country and stick to vegan only dishes due to halal concerns specially if you are a person who loves tender and succulent meat.

The Tourism New Zealand has decided to assist the huge crowd of Muslim travellers visiting the country each year by providing support to ensure that all Halal travellers are able to locate and find halal food at ease without any disappointments. In order to do so , they have issued a Halal food guide which features the list of restaurants, cafes, bakeries, supermarkets and grocery stores where Muslim travellers would be able to locate halal food in New Zealand and eat to their hearts content without having any concern.

Check out our Locals Guide to New Zealand!

In 2016, The Halal food guide was previously released, featuring 567 halal listings of restaurants, cafes and supermarkets but the newer version features 289 more options added to the previous listing.

The Halal Food Guide of New Zealand was compiled on the initiative of Tourism New Zealand along with the cooperation of "The Kiwi Muslim directory" (which is a portal where halal businesses, organizations, prayer locations and times are listed) and "FIANZ" (The Federation of Islamic Associations of New Zealand). 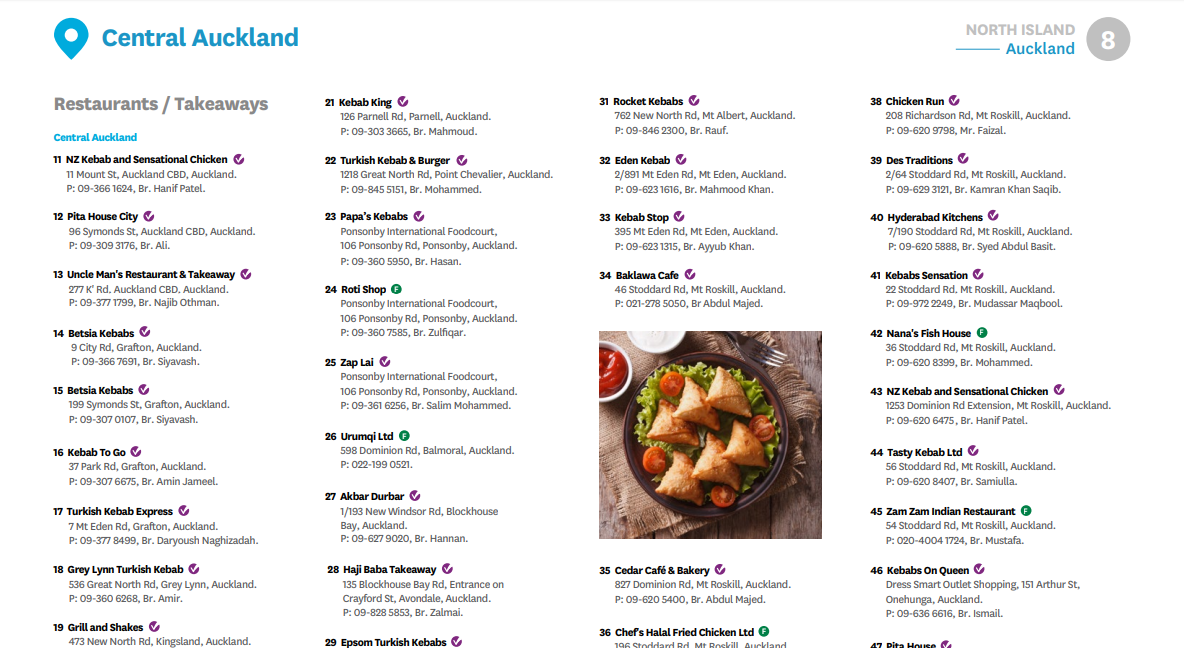 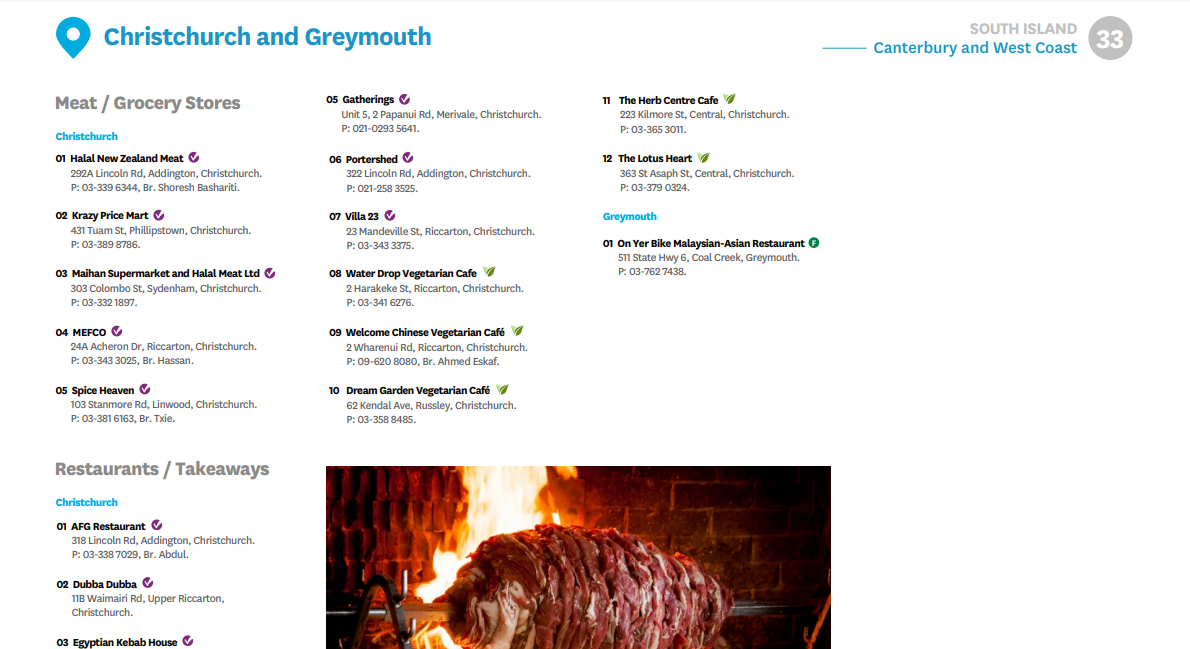 I am sure you have all experienced typing and searching through the internet for halal food options in any country that you may have visited. Reading each and every review, thousands and thousands of clicks and searches can make any trip frustrating. But if New Zealand is your next destination for your trip all you have to do is to download the halal food guide and you are good to go !

The Halal Food guide is designed so that it is user-friendly. The halal guide uses a symbol to categorize the three types of halal-friendly outlets available in the list.

The categories included are;

These symbols help any halal traveller to clearly identify and choose an eatery of their choice.

Please note that the vegetarian eateries included in the guide are not halal certified or muslim-owned, but are claimed to be purely vegan. Hence, please check with the members of staff regarding any oil or other ingredients that may be impermissible (in Islam) before consuming.

The Halal Food Guide of New Zealand covers a range of cities of the beautiful country, and the halal restaurant list is organized in a way which will easily enable Muslim travellers to locate halal food nearby. The guide is mainly divided into two sectors; one which is NORTH ISLAND and the other which is SOUTH ISLAND. In these sectors, you will find a list of the major cities of each island and the restaurants featured along with the addresses, telephone numbers and contact information. Therefore if you have any concern regarding the food served or any menu inquiries you can dial the phone right away.

On the other hand, the South Island is further divided into Nelson and Marlborough, Canterbury, West coast, Southern Lakes, Dunedin and Southland.

So whether your holiday to New Zealand is among the busy city lights in Auckland, or among the hills of Waikato or even at the Majestic Canterbury or maybe a mixture of all the cities over a couple of weeks. You will be able to locate restaurants, cafes, and even supermarkets out and about New Zealand, thanks to the halal food guide. 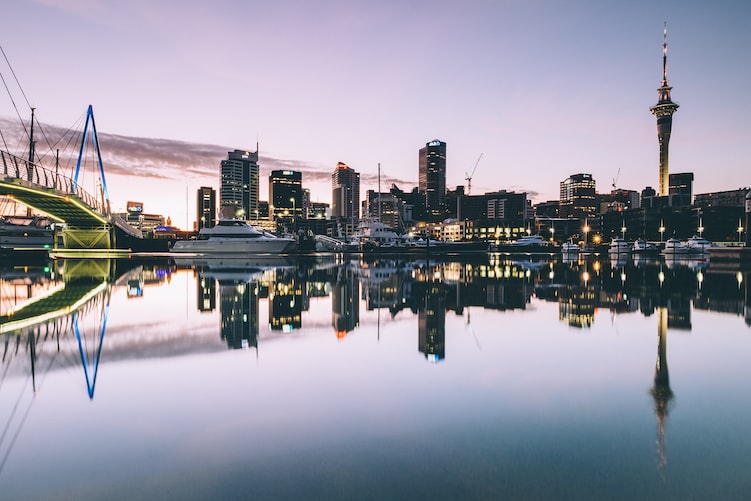 Central Auckland
In Central Auckland you would be able to locate an abundant of spots to eat without any hassle what so ever. In this city, you will find a total of 72 spots featured, out of which 18 are vegan-only diners (not halal certified) and the rest of the restaurants are either owned by Muslims or certified by FIANZ.

There also 9 bakeries and snack food places available in the halal food guide and five meat and grocery stores which are all certified by FIANZ for selling halal meat.

North Auckland
At Northern Auckland you would be able to find some great spots for some Arabian food especially if you are a fan of grilled kebabs and chicken. The halal food guide includes 15 restaurants and 2 grocery stores in which you will be able to locate halal food .

East Auckland
At East Auckland there are no halal bakeries and snack food options listed in the halal guide. However, there are 11 restaurants out of which three are beautiful restaurants that serve pizza, and are all halal certified.

Southern Auckland
In Southern Auckland , you will have no worries buying yourself a good cut of halal meat to whip up a warm meal at home. The Halal Guide shows 16 meat and grocery stores that are either Muslim-owned or Fianz certified. Apart from the meat shops, the Guide includes a list of 5 bakeries and 34 restaurants which is quite a bigger number compared to East and North Auckland. Out of the 34 spots included in the halal guide, only 3 locations are vegan-only restaurants which serve traditional south Indian food while the rest of the locations are halal certified.

West Auckland and Whangarei
Options are rather limited in these two locations. West Auckland is listed to have around 13 restaurants and a couple of meat and grocery stores. Most of the halal certified restaurants weigh towards the Indian and middle eastern cuisine.

In Whangerei, there are only 2 locations listed in the halal guide, one being a grocery store and the other being a vegan-only Indian Restaurant.

Hamilton, Morrinsville, Te Awamutu, Te Aroha and Te Kuiti
These locations which are all situated just below Auckland contain quite a number of halal friendly restaurants but are not very much as concentrated as Auckland.

Tauranga
If you are fond of visiting the beautiful volcano of Tauranga, your halal food options will be among the four restaurants included in the guide in which the majority is influenced by the Middle Eastern cuisine.

Rotorua and Lake Tapuo
Admire the beauty of the volcanic landscapes and geothermal fields of Rotorua and cruise on a beautiful boat ride along the magnificient Taupo lake while dining in one of the seven halal restaurant options available in the area. Majority of these restaurants are influenced by the middle eastern cuisine where you would be able to enjoy a yummy kebab platter and middle eastern flat breads. Unfortunately there are no halal grocery stores or bakery and snack food outlets recommended by the Kiwi Muslim directory.

Hawke's Bay
Enjoy a stroll down beautiful lanscapes of the Hawke’s Bay and enjoy the beautiful climate of the region. While you are at it, you will have 8 options of restaurants to choose from. A highlight restaurant in the region is "Café Anatlia Turkish Cusine" which will serve you some mouth watering food to munch on during your beautiful stay.

New Plymouth, Whanganui, Taihape and Hawera
Halal food options are rather limited in these areas, with two meat and grocery stores at New Plymounth and Whanganui and all four locations have a total of seven options of restaurants to eat from. Although there are limited options of Halal food options, these areas are incredibly beautiful with their natural landscapes for you to admire. I definitely recommend that you give these places a go, while keeping track of your pit stops for some of the halal restaurants mentioned in the guide.

Wellington and Masterton
This little stop before jumping over to South Island offers some great halal eateries for you. Both areas combined have 15 food options to choose from, 4 of them being vegan-only cafes and the rest of the eateries are Muslim owned for you to stock up on the meat. 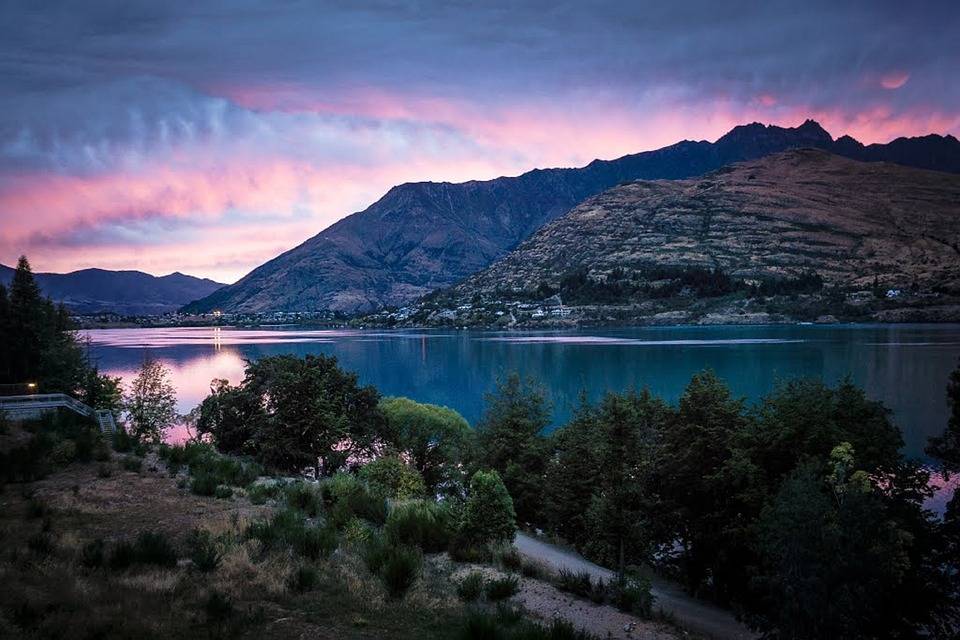 Nelson, Marlborough and Murchison
So for our first stop at South Island, I have got to say halal options are rather limited in this area, with only 4 restaurants recommended by the halal guide.

Christchurch
Enjoy the beauty of the Garden city of Christchurch which is adorned by beautiful flora as far as the eye can see. While you are at Christchurch make sure to dine at some of the best resturants in the area which are included in the halal guide. Pick your spot from the 10 restaurants and 5 halal-friendly grocery stores as per your preference. Unlike the other regions mentioned earlier, Christchurch has a variety of restaurants with different cuisines to choose from during your halal holiday to New Zealand.

Dunedin
Dunedin is a very great stop to all the Wildlife enthusiasts who visits New Zealand. It also has some great spots to grab halal food as seen on the list. With 12 options on the list, 11 are muslim-owned and one is a vegan-only eatery. Unfortunately the halal guide does not recommend any meat or grocery stores in the area.

Queenstown and Wanaka
The adventure capital of New Zealand which is Queenstown comprises of 2 recommended halal food outlets for Muslims where both are Turkish Restaurants, the same goes with Wanaka which has only one option in the list.

From the guide it is clearly visible that halal food options are very much concentrated around North Island of New Zealand in which Central Auckland has an abundance of eateries for you to choose from. There are lesser options in the South Island, but be adventurous and don't miss the chance to go out and about the country while having the nearby halal restaurants in mind. Since there are telephone numbers and addresses included in the guide, planning your holiday to New Zealand is definitely going to be a piece of cake.

Get your bags packed and head to the beautiful land of New Zealand where exciting thrills, beautiful landscapes and delicious food awaits you.

For more travel guides, check out our Halal travel blog or download the Halaltrip Islamic travel app to help locate Halal restaurants and prayer locations near you.