Mosques in Bangkok - Where to Pray?

Bangkok is the largest and most populous city and the capital of Thailand. It is also an amazing place to visit with many great opportunities for those who love to travel; from culture and food to shopping and adventure, Bangkok's got it all!

But if you're worried about finding nearby mosques in Bangkok, you don't have to! A simple web search will show you all the beautiful mosque pictures in Thailand, but now it's time to get off the internet and experience the real thing!

Here's your Muslim visitor guide to Bangkok, with a list of famous mosques in Thailand. 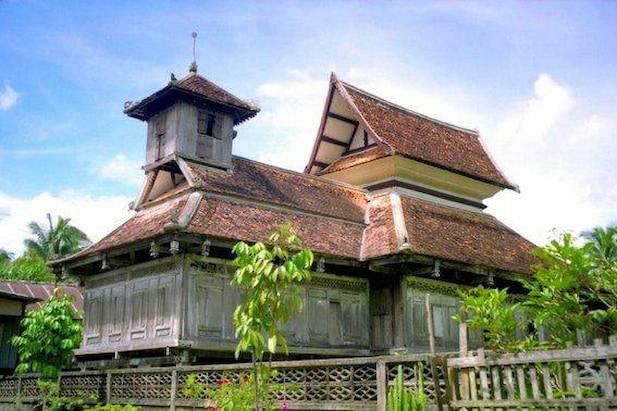 During your travel in Thailand, one of the mosques that your Muslim visitor guide to Bangkok cannot miss is the Al Hussein Mosque. Dubbed the “300 Year Mosque” by locals, it has been around for that many years and more.

It is one of the oldest mosques in Thailand, with wooden architecture and terracotta roofs that drew inspiration from traditional buildings of China, Malaysia, and Thailand. It was built in 1634 during the Pattani kingdom in a joint effort by the Muslims and Buddhists of the community. The handwritten Quran and the construction plans for the mosque remain even today and are definitely an amazing piece of history to witness on your Muslim tour to Bangkok. 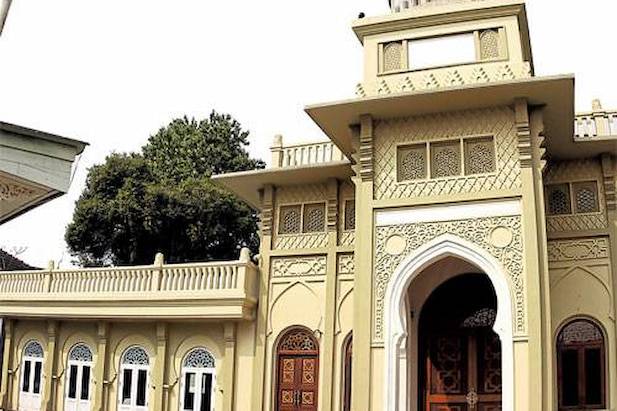 Dating back to 1688, this mosque was built during the Ayutthaya period. Originally called “Kudai Yai”, it was a teak house built on a platform with a roof of terracotta tiles resembling the hall of a Buddhist monastery. It was then renovated into a brick building, only for it to be built up from the ground again in 1952 as a concrete one due to the instability of the earlier one. This was also when it received its current name “Ton Son'', which is the Thai name for the twin pine tree, as one was planted in front of the gate and walls of the mosque. The mosque is easily accessible by public boat, and ideal if you are looking to find nearby mosques in Bangkok when traveling to Wat Arun or Wat Kanlayanamit. 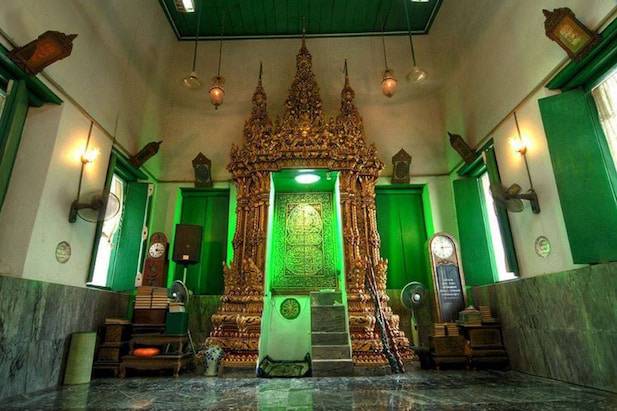 The Bang Luang Mosque was built in 1767 by Thai Muslims who lived by the Bang Luang Canal during the time of King Taskin as he fought to liberate Thailand from Burma. It is another one of the oldest mosques in Bangkok, and one of the only mosques that remain in brick and concrete (traditional Thai style). The mosque has 30 minarets, which are said to symbolize the 30 chapters of the Holy Quran, and the inside consists of tri-ethnic arts. This mosque continues to serve the community today as it did all those years ago, and the people who live here are now referred to as the Kudi Khao Community. 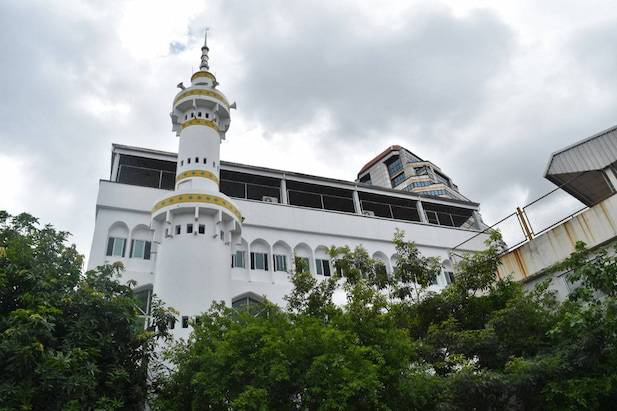 Constructed in 2007 by the Tamil Association of Thailand (TMA), this mosque serves as the center of the Tamil-speaking Muslim community in Thailand. The beautiful mosque draws inspiration from traditional South-Indian buildings and is painted white with gold accents that make it stand out. The mosque conducts lectures, Friday Jummah prayers, and other community-related events. Islamic and Quran classes are also held for girls, boys, and children.

5. The Foundation of the Islamic Centre of Thailand 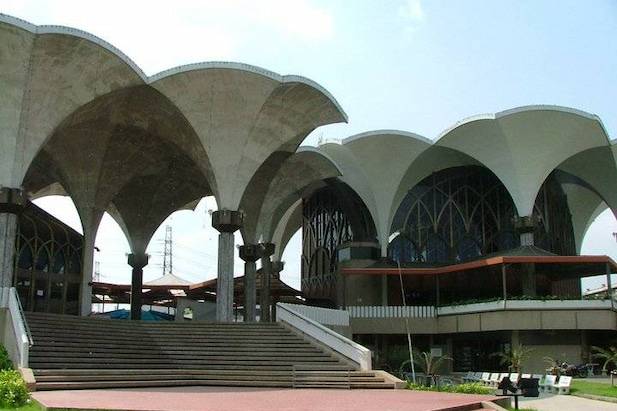 The Islamic Foundation of Thailand is one of the largest mosques in Bangkok and is definitely one place to add to your list of famous mosques in Thailand. It is also one of the most beautiful mosques in Bangkok. The building houses two main prayer halls with the combined capacity to hold 3000 people, two ablutions areas, a large auditorium, library, bookstore, food hall, and office premises. One of the main aims of this mosque is to educate the non-Muslim community and to create a peaceful environment for all. Its unique architecture is another thing that you cannot miss. The intricately decorated inside of gold and blue accents and the pillars outside that resemble upturned umbrellas are a magnificent sight to see! 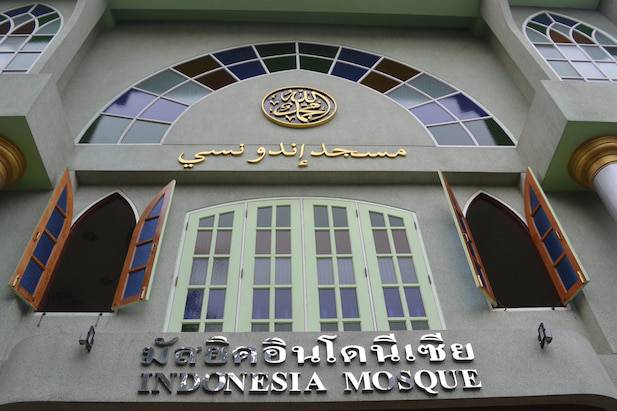 If you are looking to locate mosques on your mobile during your travel in Thailand, this is one to add to your list of mosques in Bangkok. Located near the American Embassy and the Lumphini Park, Masjid Indonesia (a.k.a. Masjid Polo), is a quiet, clean, and peaceful mosque to stop at during a busy day of sightseeing. There are also a few Halal food shops outside, so you can fill your bellies as well! 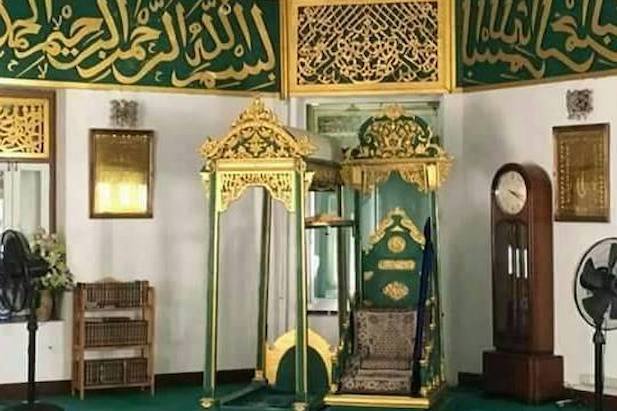 This is another famous mosque in Thailand, and if you're in the Silom or Bangrak area and are looking to find nearby mosques in Bangkok, then this is the ideal mosque. It was constructed in 1837 by an Indonesian-Arab trader but was reconstructed in 1934. The mosque is usually crowded with people and is frequented by African, Indian, and Pakistani ex-pat families living in Bangkok. The officials here speak English, and the Jummah Khutbah is also often repeated in English. 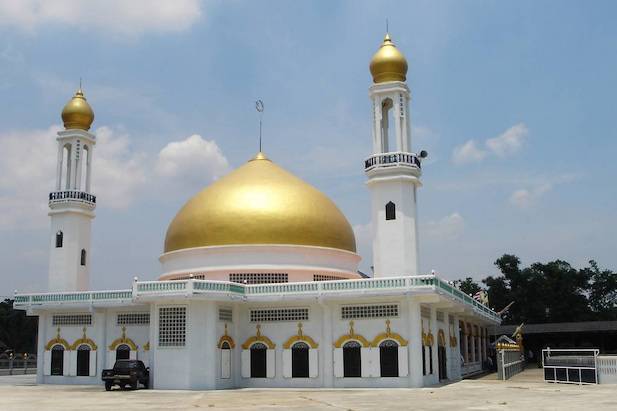 Completed in 1893, this old mosque is situated on the bank of the Saen Sap Canal. Originally it was a modest construction of wood and thatched roof, but about 100 years ago it was rebuilt and decorated by a publicly-funded campaign by the Muslims in the area. It is a beautiful mosque, so make sure to stop by this prayer place in Bangkok if you're in the area. 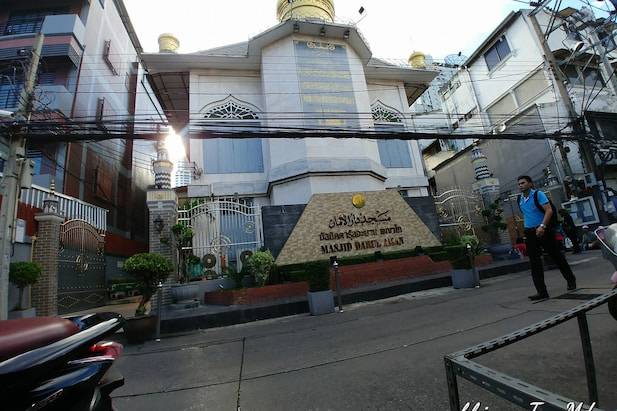 Located near many shopping and entertainment places like MBK Shopping Center and Bangkok hotel that you can visit on your travel to Thailand is Darul Aman Mosque in Petchaburi Road Soi 7. This beautiful mosque is easy to spot and the ideal place to pray and rest during a busy day of shopping. There are also plenty of Halal food shops situated outside the mosque, so you can stop by for a bite to eat after praying. 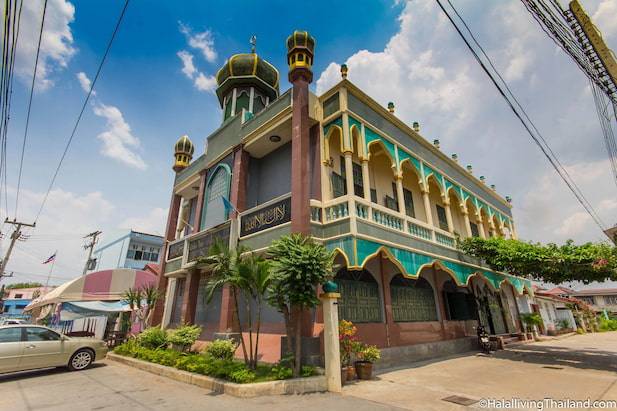 This mosque was built by the Thai Pakistani Friendship Association in Bangkok, an organization that was inaugurated 20 years ago in order to promote an exchange of culture and brotherhood among the people of both countries. It is also sometimes known as “Masjid Shaboojan Autthaya” after the place it is situated in. The mosque conducts Jummah prayers, and iftar with delicious Pakistani food during Ramadan (so if you're travelling during Ramadan and are looking at your Muslim visitor guide to Bangkok for where to stop and breakfast, you know where!) There are also a few restaurants serving Pakistani and Indian food outside the mosque.