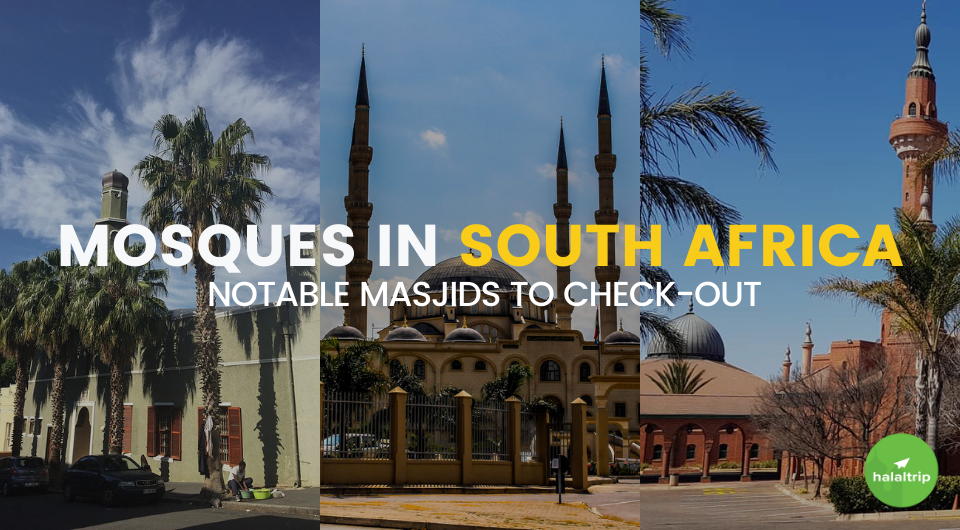 I personally feel that a masjid like a slab of chocolate is a very personal preference. It's a place of prayer no doubt but in the same way that everyone has a personal inclination towards nuts or coconut or mint, individuals may also favor a certain masjid due to some outstanding feature or simply because they are just more drawn to that piece of architecture. Although we may not be governed by Islamic law, one of the most remarkable traits about South Africa is its religious tolerance. Equal respect is given to all cultures and religions and that's why we have been so eloquently dubbed the 'Rainbow Nation'.

Halal food is in abundance, hijab is allowed anywhere and everywhere, the law acknowledges our religious marriages, the adhaan can be called at any time of the day, and masjids and jamaat khanas or more commonly known as prayer rooms are sprinkled throughout the county’s landscape. In fact, our country is so tolerant that one can pray almost anywhere, obviously within the conditions of the shariah, and our fellow non-Muslims are always so accommodating to our times of prayer that they leave us be while praying; whether it be an open park, a parking lot or even retail dressing room.

Our masjids are in abundance as well and some of the most notable masjids in South Africa include:

The Darus Salaam Islamic Centre in Pretoria- this masjid’s humble beginnings started in a much smaller compound and was then situated in a side street adjacent to its more current, prominent location. In 1998 the masjid was relocated to its present-day address on the corner of Corundum Street ext. Its glorious minarets can be seen from the main routes coming into Laudium - a suburb in Pretoria- and it currently houses a madrasa for the aalim and aalima programs, a Hifz class as well as a school for those wishing to divide their time between a secular and Islamic curriculum. Within the premises of the masjid is another reputable mainstream school in Laudium.

The masjid is at the epicenter of the community and with a separate ladies section, it allows for easy access for anyone opting to join the salaah or the numerous spiritual programs. An important aspect to note in South Africa is that with the exception of Taraweeh, women do not regularly frequent the masjid so as a result, the masjids tend to have very small women sections. Another interesting fact to note is that while I may be particularly biased towards this masjid, there are almost 10 masjids within the about 30-kilometer radius of Laudium. Laudium is a predominantly Muslim area dominated by Indians. Due to the history of South Africa involving Apartheid, race groups were clustered into certain suburbs and although we are close to 30 years out of Apartheid, many communities remained like this post-era. So yes, we are looking at about 1 masjid per every 2 km in Laudium all calling out the 5 calls to prayer daily with no protest whatsoever. 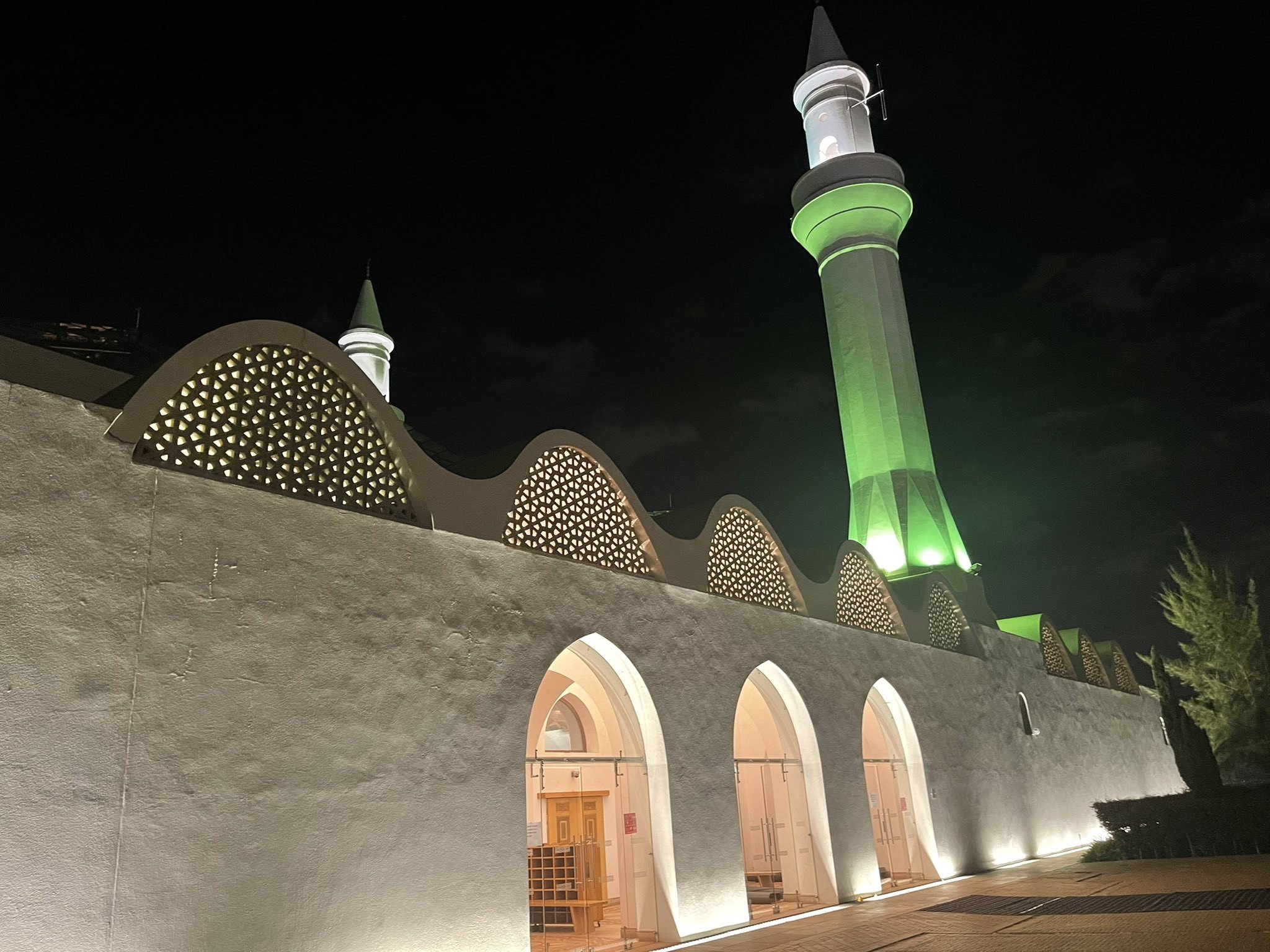 In the rich suburb of Houghton in Johannesburg, one can find the more opulent Houghton Jumah Masjid on west street. Post-Apartheid, more Muslims moved into the once white-dominated suburb and the need for a masjid arose. This masjid was the vision of Saudi dignitaries on a visit to South Africa. They purchased the land with the intention of building a masjid that would be a means of preserving their legacy on South African ground. Although these negotiations took place in 2009 the masjid laid vacant alongside the highway and was only finally completed in 2011. With its stunning outer appearance and 38m high minarets it's a sight to behold as one drives along the N1 highway. The masjid is equipped with state-of-the-art facilities and a spacious female section makes it an easy and comfortable stop and goes while on a journey. The ladies’ bathrooms also include a baby change station which makes it easily accessible to mothers with little ones. During COVID-19 the masjid has generously opened its parking lot up to the public and has installed a drive-through vaccination site which is opened daily from 8 am - 4 pm. This masjid is also the true epitome of religious tolerance as it lies directly next to a Jewish synagogue. However, during all this time, the two religions have coexisted peacefully.

When I was younger I lived in Cape Town and this was the masjid that we would attend for spiritual programs. It was also directly across my Madrasa so it was an everyday drive-by for me. The masjid, though it exists today, is very different from the one I remember as a little girl. While the mosque was still under construction at that time, today it houses approximately 6000 worshippers which makes it the largest mosque in Cape Town. The Masjid is located in Gatesville which is one of the areas where the Malays were moved to during the Apartheid era. The masjid is a replica of the Al-Aqsa Masjid in Palestine and the design is rather fitting as the Cape Town community is very passionate about the Palestinian cause. The masjid is made up of a college that offers diploma and degree courses, a Madrasa, and its renowned Islamic library. The library is a public library, is opened to all religions, and has such an impressive selection that it accommodates both children and university-going students. This mosque is situated in the center of the bustling Gatesville area and on Friday the most aromatic smells waltz through the air from the number of Cape Town delicacies around. If in Cape Town on a Friday, a Jumah is a must at this iconic masjid. 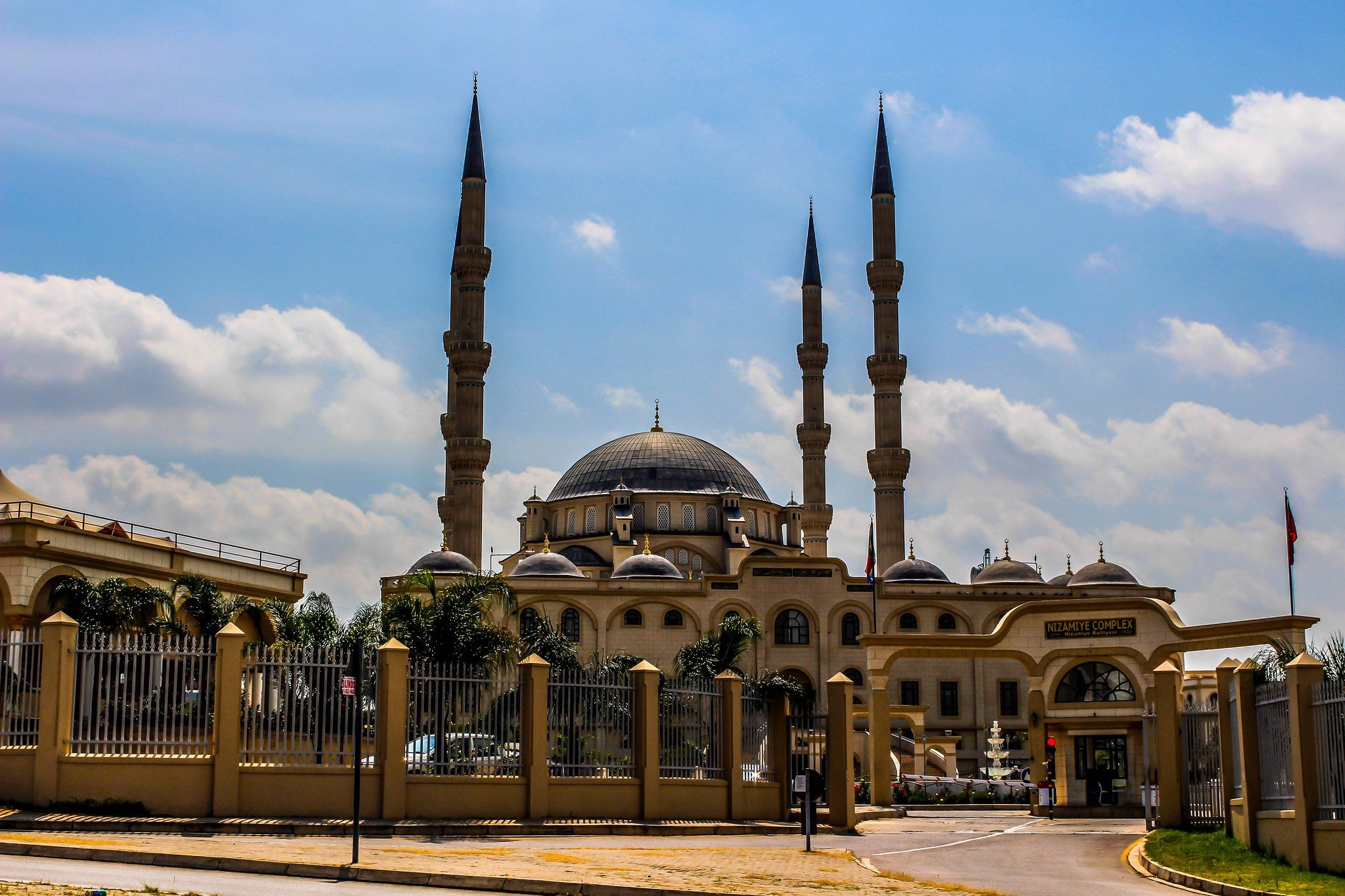 In 2012 a replica of the Selimiye Mosque which can be found in Turkey or more commonly referred to as the blue mosque in South Africa was opened in the blossoming suburb of Midrand. The complex not only houses this magnificent architectural beauty but also has within its premises a gallery containing famous Turkish landmarks, a boulevard with shops and restaurants selling authentic Turkish treats and eats, and a school that was established and is currently headed by the Turkish community. Being able to take a capacity of nearly 6000 occupants, this mosque has become the hub for religious and secular activities and is to date the largest mosque in the southern hemisphere.

The interior of the mosque consists of authentic Turkish textiles and the carpet and calligraphy have also been custom-made to mirror the original structure. The mosque was built to accommodate the thriving Turkish community within South Africa but also as means of fostering religious tolerance and tourism within South Africa. The complex itself has also become somewhat of a tourist attraction to both locals and foreigners and one is sure to feel a taste of Turkey while visiting the mosque

Get Directions and Learn more about the Nizamiye Mosque here 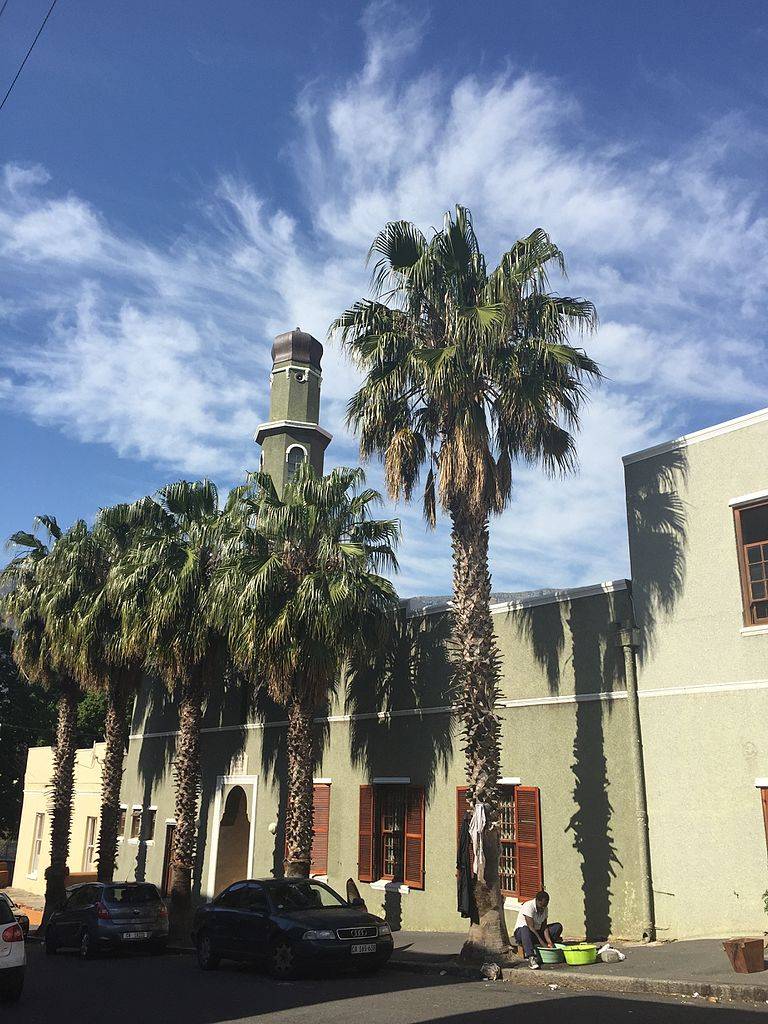 The Auwal Masjid in the colorful suburb of Bo-Kaap is the first and oldest standing mosque in South Africa. In the 1700s Malay slaves brought with them the religion of Islam which led to the construction of this mosque in 1794. The slaves who were brought during the British Occupation of South Africa were not able to practice Islam openly thus the masjid becomes a beacon of hope during these troubled times. Tuan Guru a released prisoner from the infamous Robben Island opened the first Madrasa and thereafter submitted an application to the British government to allow for a masjid to be constructed. This proposal however was sadly refused.

A few years later, a free Muslim by the name of Coridon bought two properties in Dorp Street, Cape Town. After his death, his daughter provided his land to the relevant authorities and this gave birth to the very first masjid in South Africa. The building used was initially a warehouse and amendments to the property such as a mihrab allowed it to take on the shape of a masjid. The beauty pertaining to the era of slavery and the construction of this masjid was that after the Muslims were permitted to pray in public, the construction of this masjid was assisted by a non-muslim general who laid the foundation for religious tolerance. The masjid still stands today and was visited by Prince Harry and his wife during their recent visit to South Africa. 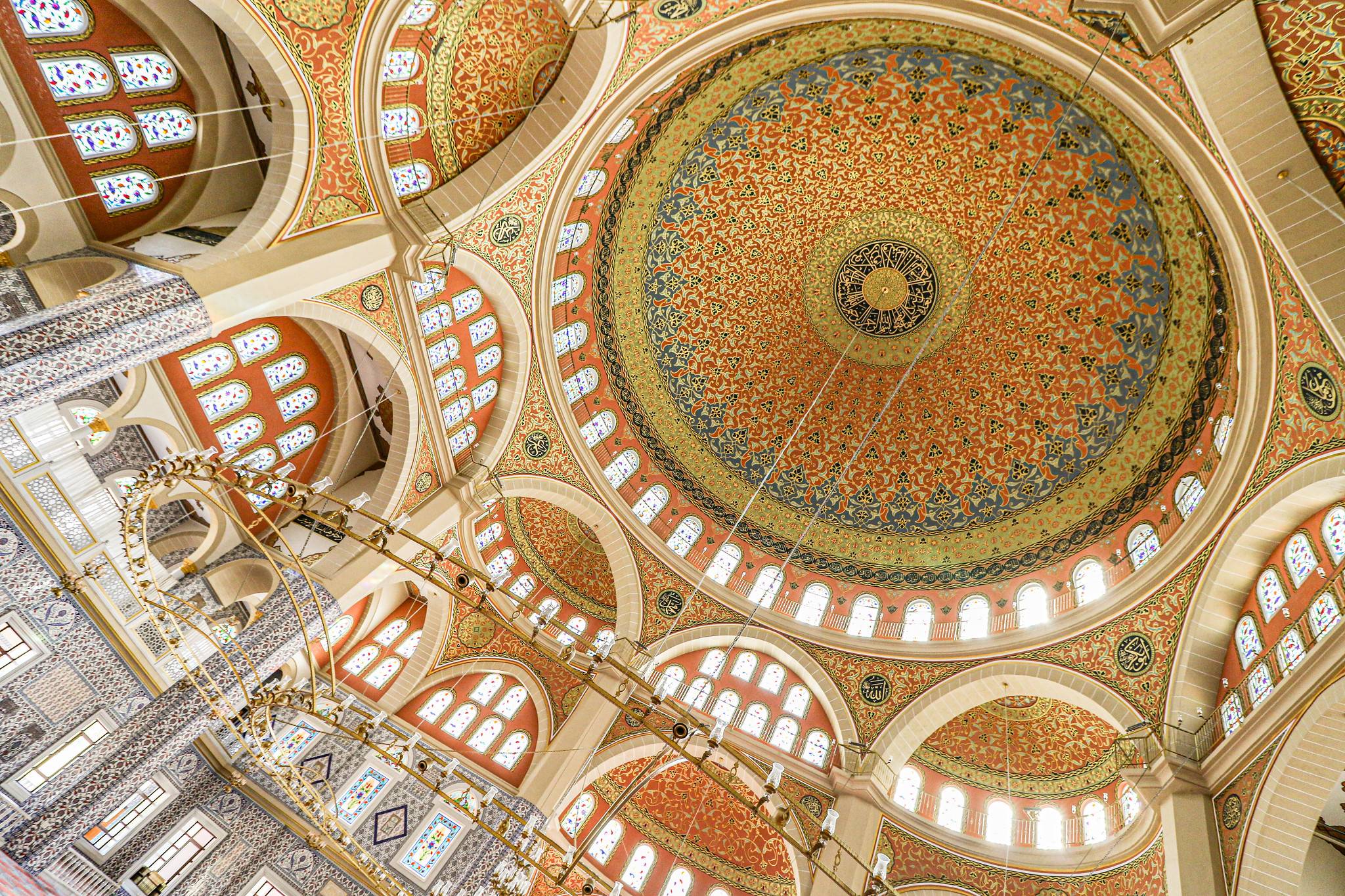 How true this fact is though I can’t really verify I thought that I should end this article off with something that I once read. In Islam, we should not refer to places of prayer as mosques but rather masjids. The belief is that at one time, Muslims were mocked by other religions while performing their prayers. They said that the same way that mosquitos are attracted to blood Muslims congregate at the masjid when the call of prayer is sounded just like mosquitos so they actually dubbed the term mosque. This may not be true but an interesting idea to think about.