10 Notable Mosques to Visit in the United Kingdom

Islamic influences arrived in the United Kingdom in the 8th century and have been growing ever since.

The United Kingdom is a country rich in cultures and influences, where in fact, Islam is now the second-largest religion in the United Kingdom. Therefore, this proves that Islamic influences also have their fair share in shaping both the society and culture right now, as shown in the cultural assimilation and the (whopping 1,500) mosques that shows up after. As a Muslim traveler, mosques would be a major interest and a necessity in your travel plan, but while you’re at it, why not make it a travel destination? Here are our lists of notable mosques that have a historical value, uniqueness, or beauty that’ll make your whole travel complete! 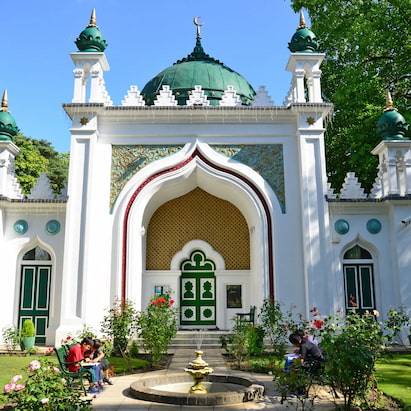 Shah Jahan Mosque is the first purpose-built mosque and the first formal place for Islamic worship in the whole United Kingdom. The mosque was built in 1889 by Dr. Gottleib Wilhelm Leitner and went through a number of ownership and events due to the conditions of the world and the Muslims in the United Kingdom at the time. The mosque was first built to accommodate worship for students from Oriental Institute to worship. Later on, the mosque will also present its importance and became the center of Islamic practice in the UK until the 1960s as it serves as the burial ground for Muslim soldiers (WW1), and also attracted royal visitors, famous British converts, and notable world leaders.

Shah Jahan Mosque itself is a Grade I listed building and has been placed as a heritage and maintained building. The mosque was built in Bath and Bargate stone according to the Persian-Saracenic Revival style that consists of a dome, two minarets, and a courtyard. Nowadays, the mosque is open to several services aside from worship, which includes Ramadan events, funerals, marriage, education (madrasah), youth activities, and more.

8 Brougham Terrace was actually a residential building, which it was then converted and used as a mosque and therefore is the first mosque in the United Kingdom. It was built in 1830 and was then converted in 1889 by Abdullah Quilliam to serve its purpose as a mosque and the home for Liverpool Muslim Institute. Abdullah Quilliam itself was one of the most influential Muslim converts in the history of Muslims in Britain. The mosque also serves as the first Islamic publication house and as a symbol of social and cultural diversity in Liverpool. After he left Liverpool in 1908, it was then converted back into an office until its final use in 1999/2000.

The mosque was then abandoned until 2014 when it was restored and reopened by The Abdullah Quilliam Society as an active mosque and a community and heritage center. Now it also serves educational purposes (with classroom blocks to enable educational visits, classes, and community group use) and as student accommodation. 8 Brougham Terrace (the main mosque) is now listed as a Grade II* building along with 9 and 10 Brougham Terrace as Grade II where it also serves its purpose for Liverpool Muslim Institute.

The Fazl Mosque which is also known as The London Mosque is the first purpose-built mosque in London. It was opened in 1926 and built through the donations of Ahmadi Muslim women in British India. The mosque was then associated closely with the government and the leaders of Pakistan, as well as the other middle eastern leaders and their predecessors.

The mosque then held exhibitions about the history of the mosque and won numerous awards over the past few years from the London Gardens Society. As the activities within the mosque increases over time, the Mosque then later saw an expansion in the construction of Mahmood Hall and Nusrat Hall to fulfill classes and meetings. It was then succeeded by Baitul Futuh Mosque which serves as the direct spiritual successor to the Fazl Mosque as the community needed much more room to do its activities. 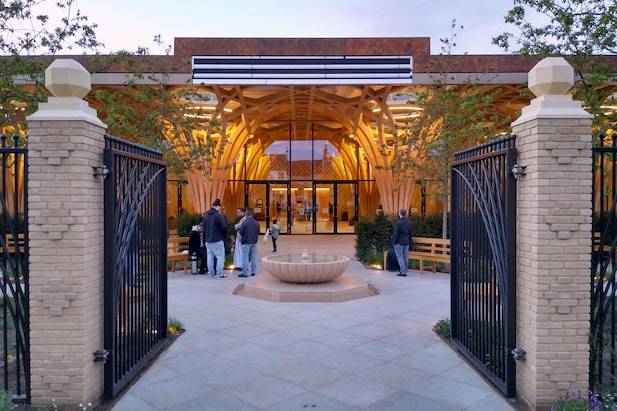 Cambridge Central Mosque is a newly opened mosque in 2019 in the city of Cambridge to meet the needs of the Muslim community as it is the first purpose-built mosque within the city, The mosque is also the first eco-friendly mosque both in Europe and the United Kingdom as it is best known for its innovative design, sustainability, and high reliance on green energy. The mosque now facilitates events, studies, tours, conversions, nikahs, and other services.

Although it does not seem like your typical mosque with its huge dome and minarets, the mosque gets creative and improvise where it houses a lot of facilities aside from the mosque-dedicated areas for worship, such as teaching, children’s area, cafe, meeting rooms (that can be used by Muslims or non-Muslims), Islamic garden, exhibitions, and many more.

Aziziye Mosque is a mosque in London that was built originally as a cinema before being converted into a mosque. The building itself was open to the public in 1913 as a cinema called Apollo Picture House. The building serves its purpose as a cinema throughout the years under different ownerships and names before finally being converted to a mosque in 1983. The mosque conversion was funded by the UK Turkish Islamic, hence the services were then provided in the Turkish language rather than in English or Arabic.

The mosque was styled to Ottoman design and has a total capacity of 2,000 people. The mosque also provides a Halal butcher, a weekend school, a restaurant, and a wedding hall.

Edinburgh Central Mosque, also known as King Fahd Mosque, is a mosque located near the University of Edinburgh and the National Museum of Scotland. It was opened to the public in 1998 and designed according to the traditional Islamic features with Turkish elements that are combined with the Scots baronial style that shows the age-old decorative of Scotland. It was created to fulfill the needs of Muslims in the city center as the Muslim population increased by a large amount.

The building is made out of stone with calligraphy on its exterior and consists of a prayer hall, ablution, multi-purpose hall, library, and the mosque kitchen that offers takeaway, outdoor tables, and catering services. The mosque is best known as the host of the Islam Festival Edinburgh and in the collaboration with MEHIP. 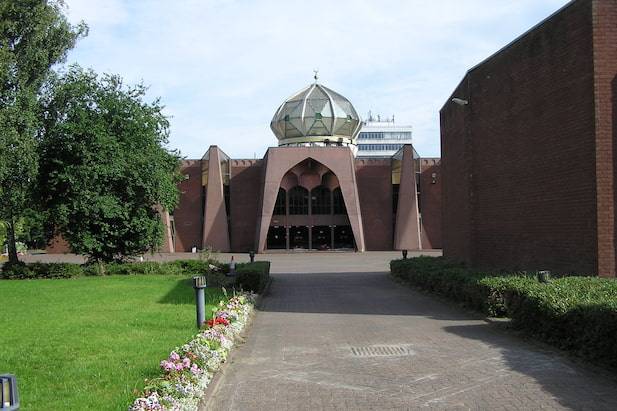 Glasgow Central Mosque is the first mosque to be built and also the largest in Scotland. It was completed in 1983 with a traditional Arabesque design and courtyard. Its design language can be explained through its long facade, arched windows, and floral design. The mosque is also well known for being a blend of Islamic architecture with classic Glasgow building characters such as the use of old red sandstone.

The mosque has been serving the public by helping with prayers, holding marriages and funerals, and others. The mosque is one of the most recognizable in the city and is visited by the media and anyone that are deprived of Islamic knowledge.

Brick Lane Mosque or known as London Jamme Masjid, is a mosque that has a unique past for serving both the Christian and Jews communities before acting as a mosque. It was constructed in the mid-eighteenth century and the building design language shows the age of immigration into the neighborhood and was known as La Neuve Eglise as a protestant chapel, and the Spitalfields Great Synagogue as a Jewish Synagogue. The mosque now mostly serves Bangladeshi Muslims as the neighborhood has been a witness to the Bangladeshi boom in the area.

The mosque has been listed as a Grade II* building as Great Synagogue, and the ancillary building to the mosque as Grade II. The mosque sermons are delivered in English, Arabic, and Bengali.

Swansea Mosque is also a unique case where the “mosque” itself has served the Muslim community but then physically moved into a church. The building was built in 1864 as St. Andrew’s church by Scottish immigrants. Before moving into the church, the mosque activities were done in their own existing two-terraced commercial building near the church since the 1980s. The move itself is done to cater to the needs of the growing Muslim community.

Acquired in 1997, the mosque has since retained all of its church features such as its twin tower and halls. In 2004 it was then restored and renovated since the church has been disused for an amount of time. 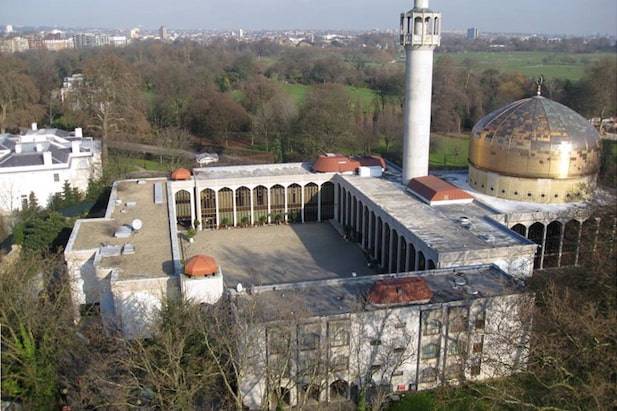 The London Central Mosque is a mosque completed in 1994, as a symbolic gift exchange between King George VI and King Farouk of Egypt and Sudan. The Mosque consisted of two prayer halls, three-story wings, a grand entrance hall, a library, a reading room, administration offices, a symbolic minaret, a cafe, and a golden dome. The interior is decorated with chandeliers and a view of greeneries through the big arched windows. The mosque is located near Regents Park and is surrounded by greeneries on the other side of London, secluding it from the hustle and bustle while being close to the tube and various bus routes. For more detail on the mosque, you can read the full guide on A Guide to London Central Mosque.

That concludes our list of the notable mosques in the United Kingdom. So, which mosque will you visit first?