With the aim of helping you experience the very best holiday in Turkey, HalalTrip will take you through the amazing Galata Tower story. While we take you through the many interesting Galata Tower facts, you could also find out more about the many famous Galata Tower restaurants that are ideal to enjoy some delicious Muslim-friendly food in Istanbul. So read on and discover the wonder behind one of the most awe-inspiring Muslim-friendly places to visit in Turkey.

The history of the iconic monument – the Galata Tower

Picture Credit - www.askideas.com
The Galata Tower story is one which is as rich and majestic as the mighty structure is - currently standing at a staggering 67m tall. Overtime, the Galata Tower has gone through many trials and tribulations as well as varied purposes but is still standing to this very day - a testament to its longevity. Although the inception of the Galata Tower is disputed, it is widely believed that the structure was built back in 528 AD by the Emperor Justinian I of the Byzantine Empire. In 1509, the Galata Tower experienced an earthquake that nearly destroyed it completely, but was restored back to its former glory by renowned Ottoman architect named Mimar Hayreddin.
Later, sometime during the reign of Murad III, a Sultan of the Ottoman Empire, the Galata Tower was converted to a prison to house prisoners of the time. The Galata Tower went through a form of refurbishment in the late 16th century, as an observatory was added to the pinnacle of the tower. In 1717, when the Ottoman Empire was helmed by Sultan Ahmed III, the Galata Tower was converted to a platform for observing fires across the city. This was done as the Ottomans realized the panoramic view that the Galata Tower offered was useful in spotting smoke from a distance and could easily pinpoint the exact location of the mishap.
There were many interesting Galata Tower occurrences throughout its history. However, the most interesting of the lot was when a 17th century legendary Ottoman Aviator named Hezârfen Ahmed Celebi attempted to fly from the tower, and after years of trials he ultimately succeeded and took flight with wings attached to his arms. This incredible feat led to his exile to Algeria as the then incumbent Sultan of the Ottoman Empire was paranoid of his brilliance. 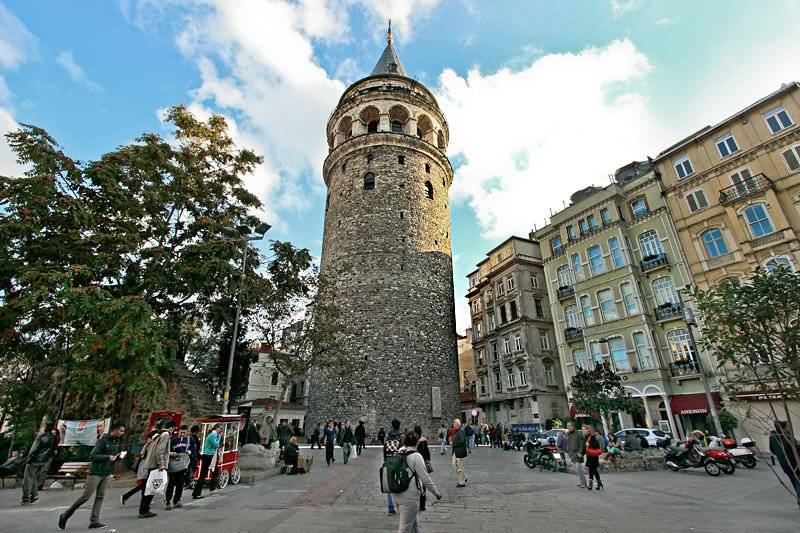 Picture Credit - www.stevepinker.com
Today the Galata Tower serves as one of the most famous attractions in Istanbul. You can gain access to the tower for a small fee of about 18.5 Turkish Liras at the counter. The Tower remains open from 9 am to 8 pm daily and access to the balcony is open till 5 pm (extended to 7 pm in the summer). Conquering the climb to the top of the tower is truly rewarding as the observation deck provides a spectacular panoramic Galata Tower view of the surrounding area. This breathtaking view allows you to witness several landmarks such as the Golden Horn, Suleiman`s Mosque, Blue Mosque, Topkapi Palace, and Spice Market among many others. The tower has a single flight of stairs leading all the way to the top or you could even take the elevator and take the stairs for the last part of the climb.

Galata Tower restaurants not to be missed 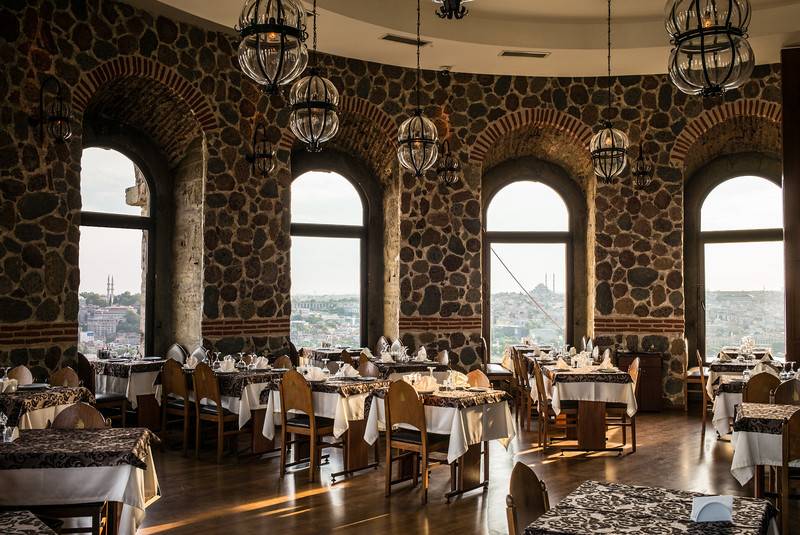 Picture Credit - www.youtube.com
The climb to the top of the tower will surely make you hungry and there are a number of exotic restaurants at the top and around the tower to treat you to the fine taste of Turkish cuisine. Here are some of the best Galata Tower restaurants serving Muslim-friendly food in Istanbul.
Petek Büfe – this small eatery found close to the Galata tower is one of the most recommended places to find Halal food in Istanbul. The restaurant provides outdoor seating so you can catch a glimpse of the Galata Tower while you sink your teeth into mouth-watering Turkish delights like Döner Kebab, which the restaurant is famous for.
Cafe Gundogdu – after a tiring but enjoyable visit to the Galata tower, you can enjoy a refreshing cup of the finest Turkish tea or coffee at this café.
Galata Tower Restaurant – This restaurant located in the tower is known for the amazing view it provides during the day and it only gets better at night. The ambiance is perfect to enjoy a romantic meal but you might want to book a table in advance to beat the large crowds. The restaurant specializes in traditional Turkish cuisine and you could even enjoy a tower shaped biscuit served with a rich cup of coffee.
Cenevis café – As you wander around the premises, you would also come across the Cenevis café. Offering outdoor seating, this family run business is a great place to enjoy some simple yet delicious seafood dishes, all of which are prepared with seasonal fresh fish. This eatery is quite popular for its fish sandwiches, grilled fish and salad and other delights that are quite reasonably priced. This makes it a great place to visit especially if you are on a limited budget.
Airport and Airline Experiences Beach Experiences Best Halal Dishes City Experiences Contests Destination Ideas Environmentally Friendly Travel Festivals and Events Great Train Journeys Guides to Finding Halal Friendly Hotels Guides to Finding Mosques Hajj and Umrah Halal Food Blog Halal Food Recipes Halaltrip Announcements HalalTrip Mobile App Heritage Travel Ibn Batutta's travels Nature Experiences Offers Ramadan and Eid Shopping Experiences Sports Events Travel Ahadith & Dua Travel Tips & Etiquettes Travellers Stories Weekend Getaways
Login to comment